Quentin Tarantino talks Tinseltown lore, his memories of growing up in 1960s Los Angeles and the genesis of Once Upon a Time… in Hollywood. Plus the cinematic afterlife of Sharon Tate, Pedro Almodóvar on Pain and Glory, Christian Petzold on Transit, and the making of Cary Grant.

In print and digital from 8 August 2019. Get the digital edition, buy a print edition or . “I gotta tell you something. We can get actual photos of what Sunset Boulevard looked like in 1969 or what Riverside Drive look like, or Magnolia, we can do that. And we did it. But the jumping-off point was going to be my memory – as a six-year-old sitting in the passenger seat of my stepfather’s Karmann Ghia. And even that shot, that kind of looks up at [Brad Pitt’s Hollywood stuntman] Cliff as he drives by the [car paint and body shop] Earl Scheib, and all those signs, that’s pretty much my perspective, being a little kid.”

In our September 2019 issue, Quentin Tarantino lifts the lid on the memories – once-, twice- or thrice-removed – the legends and yarns that inform and inflect Once Upon a Time… in Hollywood, his most masterly pop-cultural confection yet.

A fable of a Hollywood in the throes of change both artistic and social, the film pulls up right next to historical fact, with Leonardo DiCaprio playing a fictional old-guard TV western star called Rick Dalton (complete with mock film inserts and accompanying posters, and a similarly almost-true stunt double and confidant played by Pitt), whose new neighbours in the Hollywood Hills are the real ill-fated it-couple Roman Polanski and Sharon Tate (played by a day-dreamy Margot Robbie). Across an effusive nine-page interview with Kim Morgan, Tarantino unpacks the alternative history he invented for his star creation, shares the deep-Hollywood tales he gleaned from Bruce Dern and the late Burt Reynolds, and explains how both DiCaprio’s discovery of Ralph Meeker and Brad Pitt’s father’s love of TV westerns fed into DiCaprio’s characterisation. Meanwhile in his accompanying essay The Beautiful and the Damned Erik Morse reflects on Sharon Tate’s real on-screen history, her handful of roles sadly occluded by her adoption as first a countercultural muse and then a figure of zeitgeist tragedy.

Tarantino isn’t the only filmmaker distilling histories and memories this month. The now-veteran Pedro Almodóvar has a four-decade career of his own to play with, and his teasingly not-quite-autofictional Pain and Glory, in which Antonio Banderas plays a creatively anguished filmmaker finding Proustian inspiration in his childhood memories, forms something of an extended trilogy of films focussed on gay cineastes, following Law of Desire in 1986 and 2004’s Bad Education. Paul Julian Smith explores the film’s “smoothly oneiric tone”, its biographical rabbit holes and reflections on the links between cinema and homosexuality, while Almodóvar talks to Maria Delgado about memory – especially of his generation in the 1980s – creative salvation and his many longstanding collaborators.

Transit, the latest film from Germany’s Christian Petzold, also refracts histories, albeit more widely transcontinental ones. An adaptation of Nazi exile Anna Seghers’s 1944 novel set amongst her fellow European would-be refugees awaiting clearance to migrate out of occupied Marseille, the film is visibly set in present-day France, and is thus simultaneously haunted by the ghosts of both Europe’s war-torn past and its present-day traumas of inward migration. “The present is still infected by the past, and that’s what opens up this transitory space – a spare where things are floating,” Petzold tells Jonathan Romney.

Finally, on a lighter note, we return to a silver-screen-era Hollywood in which the actor-character we love as Cary Grant was taking shape. From his 1937 twin breakthroughs with the supernatural comedy Topper and “crystal-cut screwball” The Awful Truth – his 27th and 29th films in Hollywood – Pamela Hutchinson winds back the clock to Bristolian acrobat Archibald Leach’s first arrival in New York in 1922, and in particular his first five years out West under contract to Paramount, who wanted him debonair but not daffy. “If you’ve seen the best of his early 30s work,” writes Hutchinson, “it’s hard to agree that Grant was pretending to be anyone other than his own wildly idiosyncratic persona, one that had been forged film by film, in spite of Paramount’s plans.” 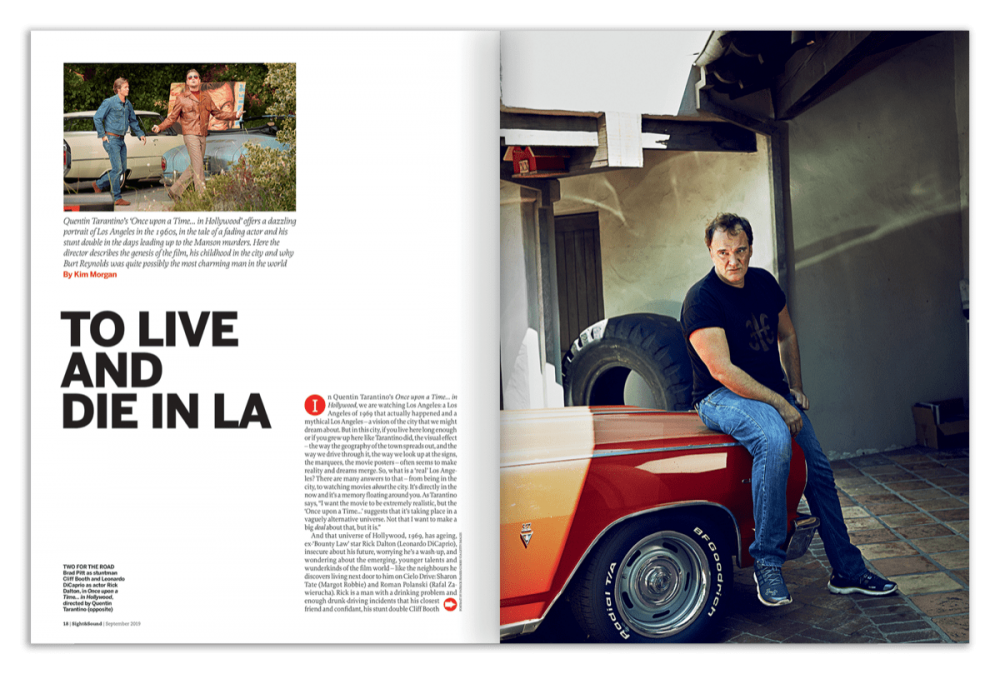 To Live and Die in LA

Quentin Tarantino’s Once upon a Time… in Hollywood offers a dazzling portrait of Los Angeles in the 1960s, in the tale of a fading actor and his stunt double in the days leading up to the Manson murders. Here the director describes the genesis of the film, his childhood in the city and why Burt Reynolds was quite possibly the most charming man in the world. By Kim Morgan.

The Beautiful and the Damned

Media ubiquity helped to establish Sharon Tate as a countercultural muse in the 1960s – but her substantial acting talents were largely overlooked in her lifetime, and then eclipsed altogether by the violent death that came to define her legacy. By Erik Morse. 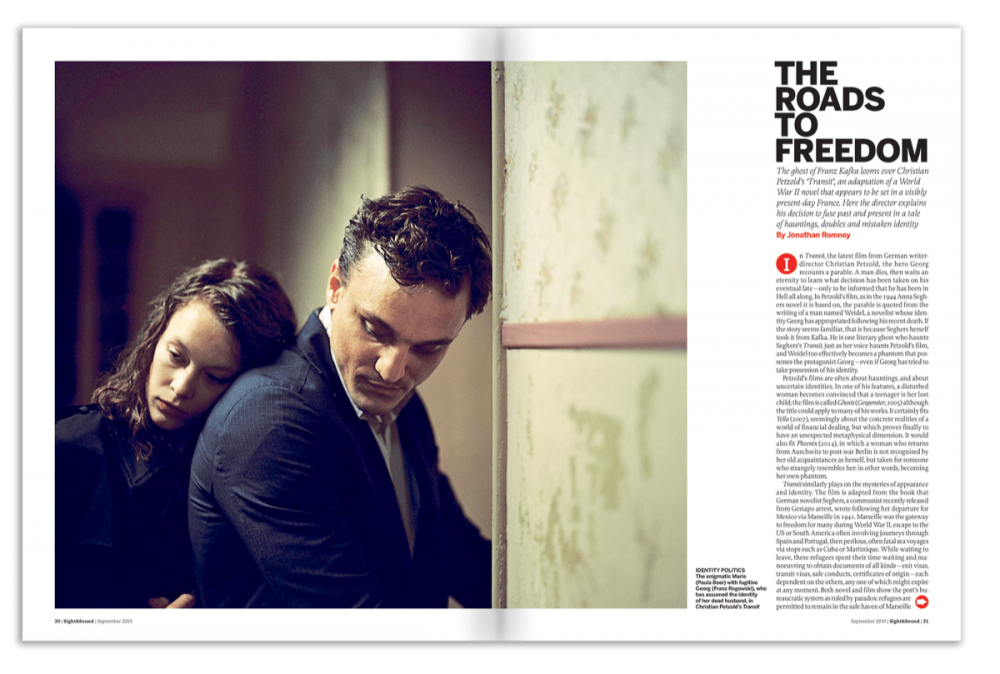 The Roads to Freedom

The ghost of Franz Kafka looms over Christian Petzold’s Transit, an adaptation of a World War II novel that appears to be set in a visibly present-day France. Here the director explains his decision to fuse past and present in a tale of hauntings, doubles and mistaken identity. By Jonathan Romney. 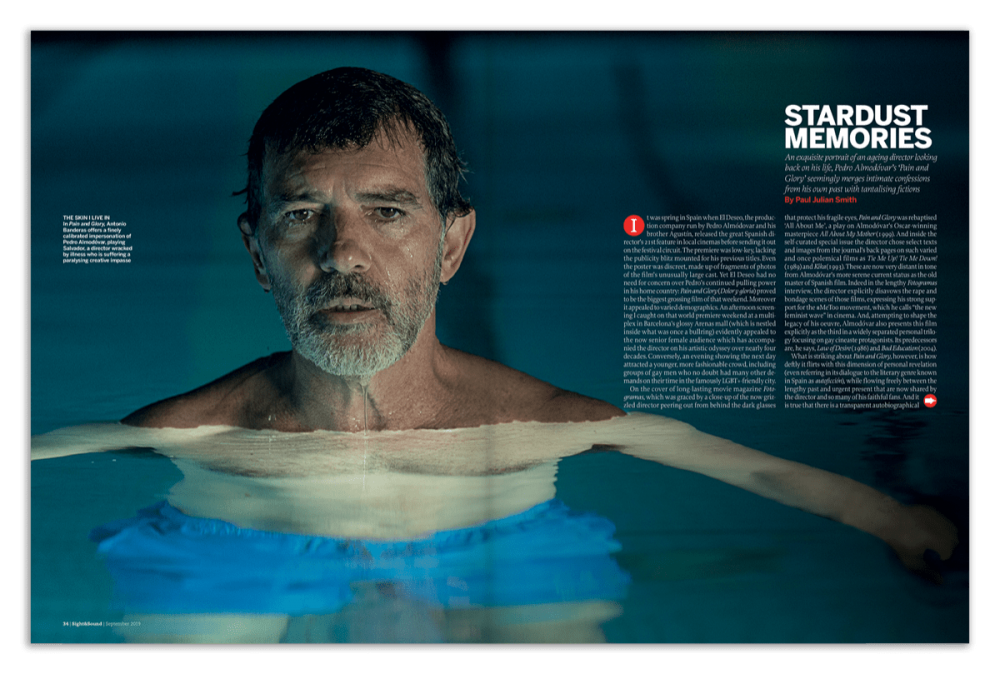 An exquisite portrait of an ageing director looking back on his life, Pedro Almodóvar’s Pain and Glory seemingly merges intimate confessions from his own past with tantalising fictions. By Paul Julian Smith.

Almodóvar discusses art, creativity, autobiographical filmmaking and why he wouldn’t change a thing about his life in the hedonistic 1980s. By María Delgado. 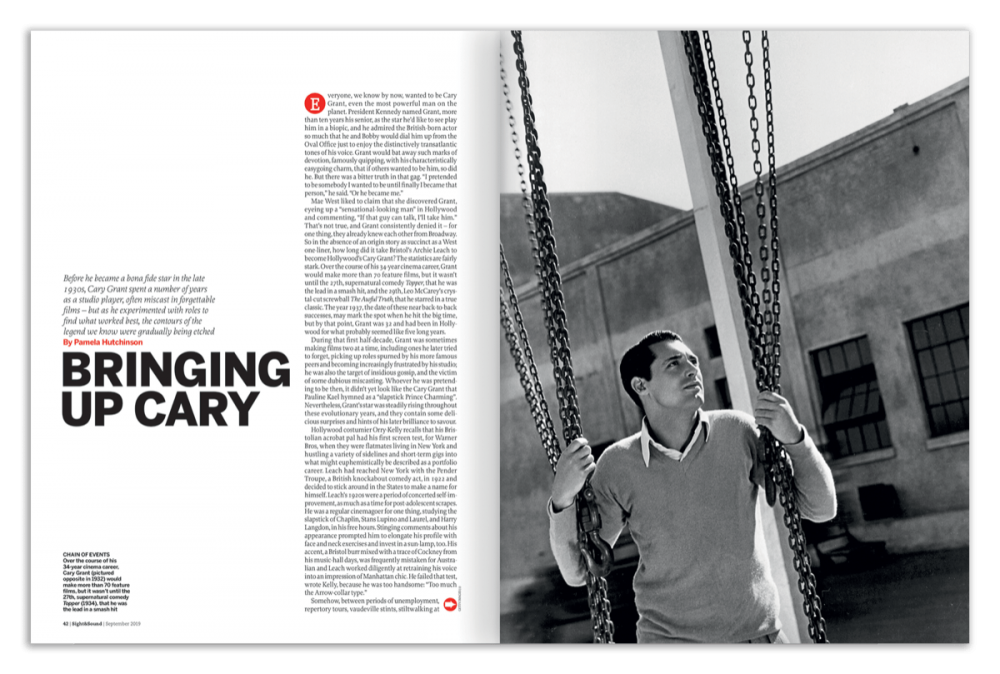 Before he became a bona fide star in the late 1930s, Cary Grant spent a number of years as a studio player, often miscast in forgettable films – but as he experimented with roles to find what worked best, the contours of the legend we know were gradually being etched. By Pamela Hutchinson

And life goes on… This month’s highlights, from cinema seasons to streaming pointers.

A martial arts expert has to save her daughter from organ-harvesting child snatchers in Furie, the highest-grossing Vietnamese movie ever. By Kim Megson.

Ritesh Batra, the director of The Lunchbox and Photograph, celebrates the enduring charms of a cinema frozen in time from old Mumbai.

In a season when the multiplexes are bursting with blockbusters, arthouse venues are looking for a different kind of audience grabber. By Charles Gant. 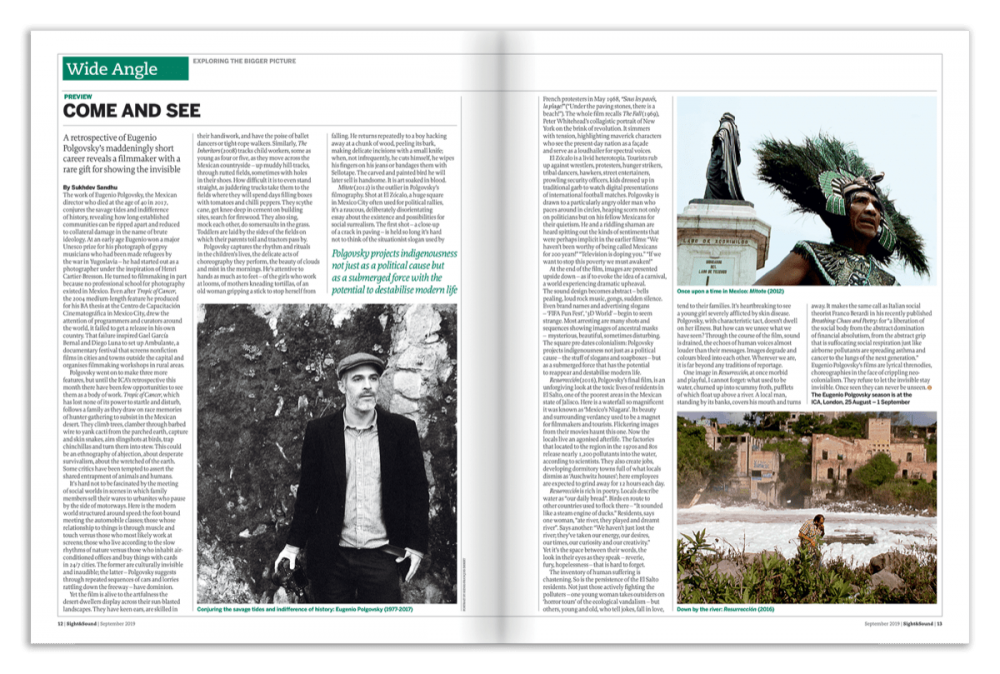 A retrospective of Eugenio Polgovsky’s maddeningly short career reveals a filmmaker with a rare gift for showing the invisible. By Sukhdev Sandhu.

Musidora in a black catsuit, nothing showing but her eyes, is one of the indelible images of early cinema – but she was far more than an image. By Pamela Hutchinson From an illuminating spotlight on director Henry King to a selection of brutal noirs, Bologna offered its usual feast of archive treats. By James Bell. 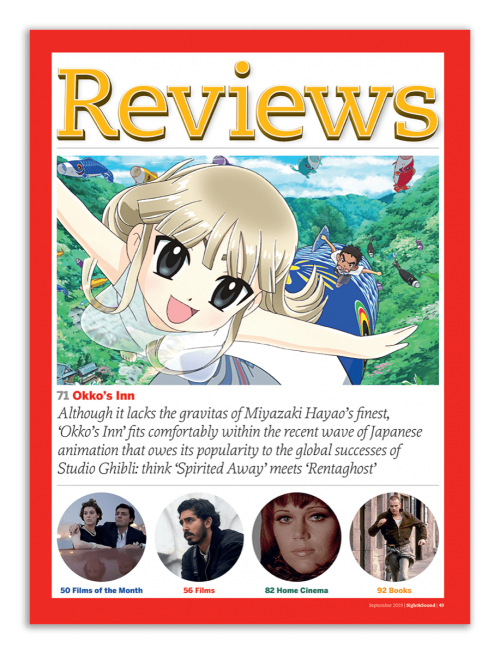 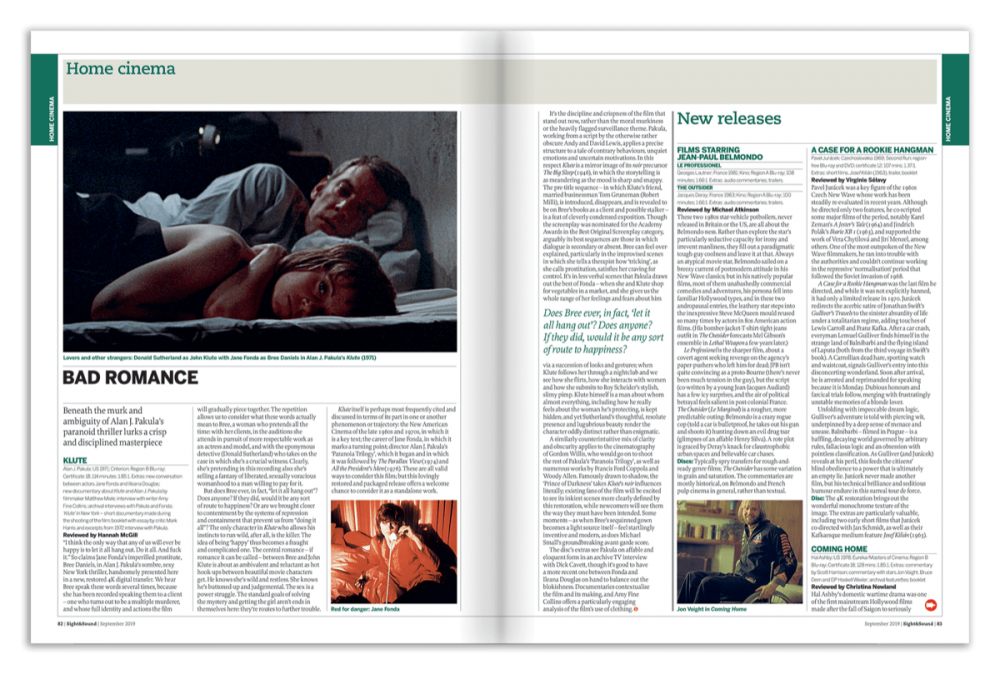 Beneath the murk and ambiguity of Alan J. Pakula’s paranoid thriller lurks a crisp and disciplined masterpiece. By Hannah McGill.

Mai Zetterling left behind a successful acting career to become a fearless and original director. It’s time she was properly appreciated. Reviewed by Pamela Hutchinson.

Lost and found: You and Me

Often written off as a failure, the most elusive of all Fritz Lang’s talkies is a flawed but remarkable pleasure. By Tony Rayns.

Robert Hanks on Buck Rogers in the 25th Century. Britpop Cinema: From Trainspotting to This Is England by Matt Gleasby (Intellect) reviewed by Will Massa

On the Back of our Images: 1991-2005 by Luc Dardenne (Featherproof Books) reviewed by Geoff Andrew The denouement of Robert Bresson’s last masterwork fulfils his ideas about filmmaking, and his urge toward the spiritual. By Chris Shields.