As wry as he was virile, Burt Reynolds wore his stardom with a nonchalance, a fallibility and sense of camaraderie, that made it all the warmer while it lasted.

from our forthcoming November 2018 issue 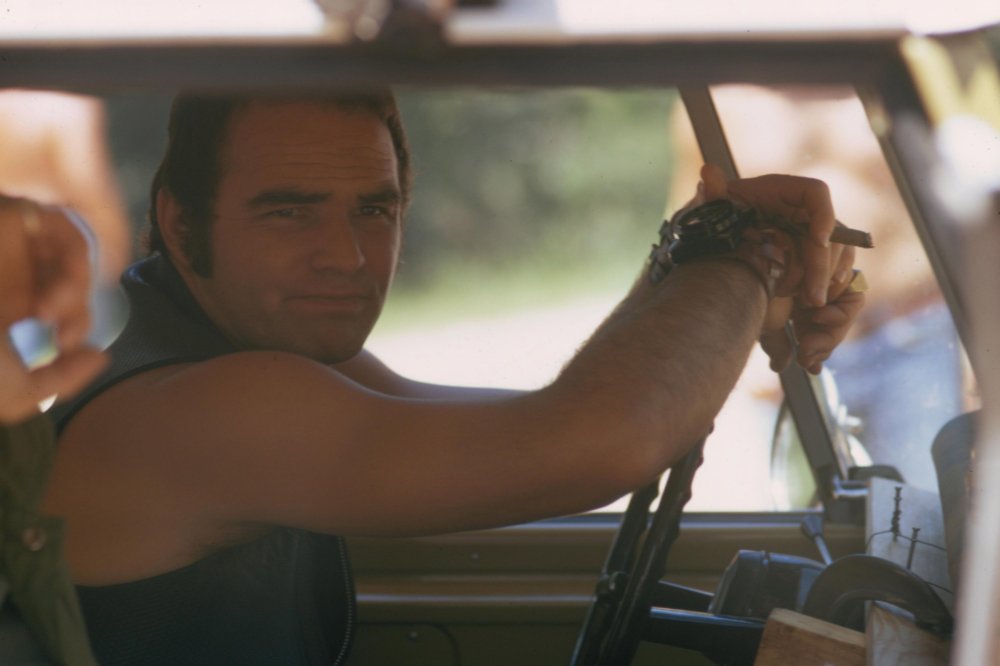 Burt Reynolds as Lewis in Deliverance (1972)

When he was in his prime, he was past his prime. This was no small part of his charm. Not that Burt Reynolds was by any means an old man when superstardom finally came knocking – he was 36 when Deliverance was released in the summer of 1972, and looked great, flat-bellied and hard-muscled and tanned brown – but almost immediately he found himself playing men with one eye permanently cocked back at better days gone by.

His Paul ‘Wrecking’ Crewe in Robert Aldrich’s The Longest Yard (1974) is a disgraced ex-quarterback, bounced out of the NFL for points shaving, since descended into drinking and domestic turmoil. His LAPD detective in Hustle (1975), also for Aldrich, retreats from the soiled city in nostalgic dreams, rhapsodising: “I love the 30s. Clean air, clean water, when young girls were treated with respect.”

In Hooper (1978), his legendary stuntman must reckon with a hungry new generation gaining ground on him as he slows, personified by hot-shit youngster Jan-Michael Vincent. His part in Deliverance is remembered as the one that, per most obituaries, made him the poster boy for 70s machismo, but we shouldn’t overlook how central the frailty of masculinity is to John Boorman’s movie, which pivots on a scene of same-sex rape, and sidelines the splendid, virile Burt with a bitch of a compound fracture for its last act. 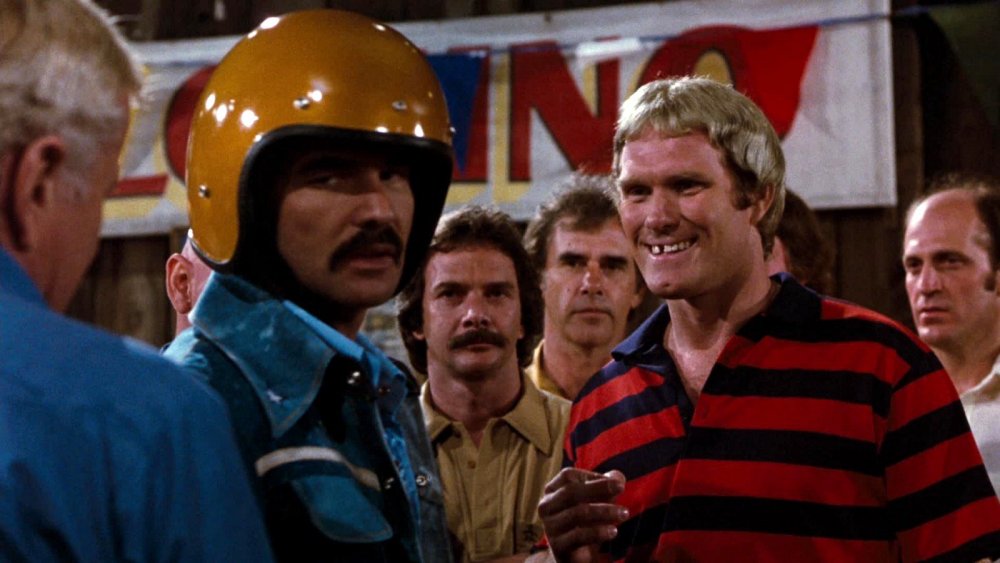 As Sonny Hooper in Hooper (aka Double Jeopardy, 1978)

It was the fallibility of that much lusted-after body that had put Reynolds in pictures in the first place. The man who would drive untold numbers of police cruisers into ditches, creeks and culverts, the man who played anti-authoritarian Gator McKlusky in the hard-edged White Lightning (1973) and its lighter, Reynolds-directed sequel, was the son of the Chief of Police in Riviera Beach, Florida, near Palm Beach.

Burton Leon Reynolds, Jr. became a standout high school football star, later attending Florida State University on a scholarship, where he gained 33 yards on his first pass reception against Georgia in 1954, but he had to gradually surrender his ambitions of being an NFL running back when faced with the weakness of his much-damaged knees – the traces of those old injuries tell in the splay-legged strut of his porn maven Jack Horner in Boogie Nights (1997). It was in this period of personal crisis, recuperating from gridiron wounds and taking classes at Palm Beach Junior College, that Reynolds was cast in a play by English instructor Watson B. Duncan III, and discovered his new métier. 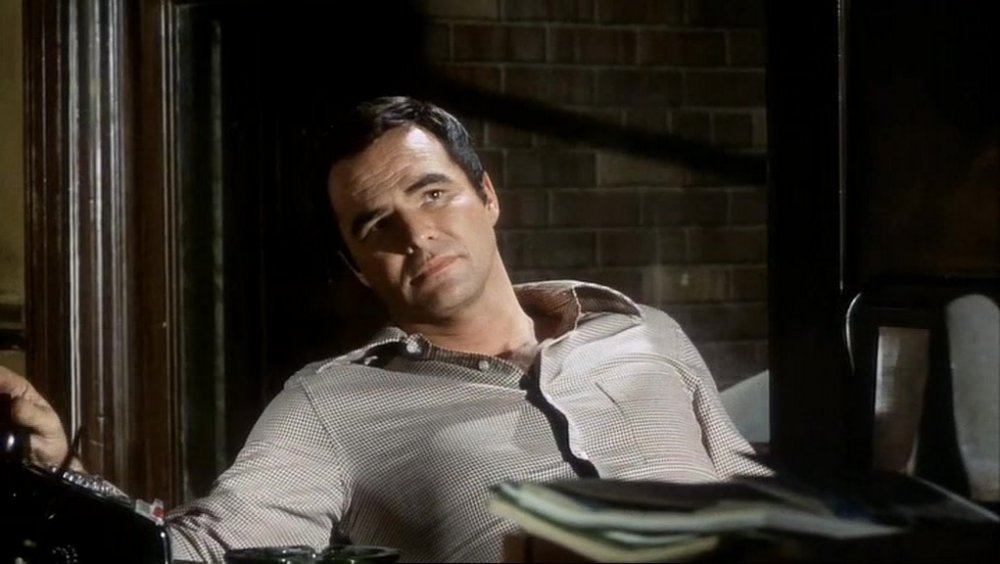 As Lieutenant Phil Gaines in Hustle (aka Home Free, 1975)

The road from novice actor to household name was not a straight or an easy one. Like Clint Eastwood, his co-star in City Heat (1984) and his nearest competition for quintessential male star of the stagflation era, Reynolds took a roundabout path through playing television cowboys and appearing in spaghetti westerns – he had a recurring role on Gunsmoke from 1962 to 65, replacing Dennis Weaver’s character with his ‘halfbreed’ Quint Asper, and played a lone, vengeful Indian rider in Sergio Corbucci’s 1966 Navajo Joe. (Reynolds would himself claim part Cherokee ancestry, though this is difficult to verify.)

It was as Lewis Medlock, the weekend warrior survivalist of Deliverance, that Reynolds finally broke big, and when he did he cashed in with impunity. There was a rushed paperback (HOT LINE: The Letters I Get… And Write!) replete with a bottomless back cover photo, and an album (1973’s Ask Me What I Am) and of course that bearskin rug Cosmopolitan centerfold, which flooded social media as news of the actor’s death at age 82 spread. 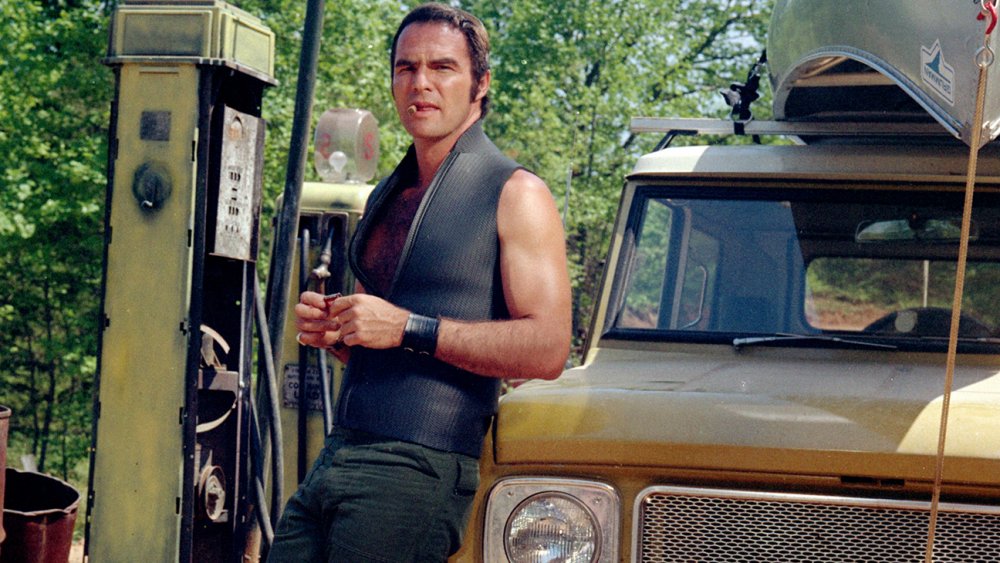 All at once he was a sensation and a punchline, while a few film-historically inclined parties saw in him something else: a laid-back throwback, a gum-snapping Gable in skintight double-denim. Peter Bogdanovich recruited him to two little-loved movies that beckoned back to bygone Hollywood, At Long Last Love (1975) and Nickelodeon (1976).

Considering Gator (1976), the first of the five films that Reynolds would direct, Molly Haskell of the Village Voice penned an appraisal of the actor-filmmaker that has yet to be bettered, writing of him as “one of the more interesting and appealing male stars for those qualities that others condescend to – the bright, even antiseptic, high gloss and a genuine light touch”, and going on to describe him as “playful and quizzical, with the ability of a Fred Astaire or a Rock Hudson to deflect attention from himself to the woman beside him; he has the confidence of someone who’s physically there and not afraid of being blown away by his co-star”. He was himself prone to slipping his impressions of Golden Age stars like Gregory Peck into his films, while leaving behind an easy-to-follow breadcrumb trail of actorly tics for potential imitators – the chewing gum, the gassed high-pitched giggle, the caterpillar eyebrows and the belt buckle business, all later codified by Norm MacDonald on Saturday Night Live. 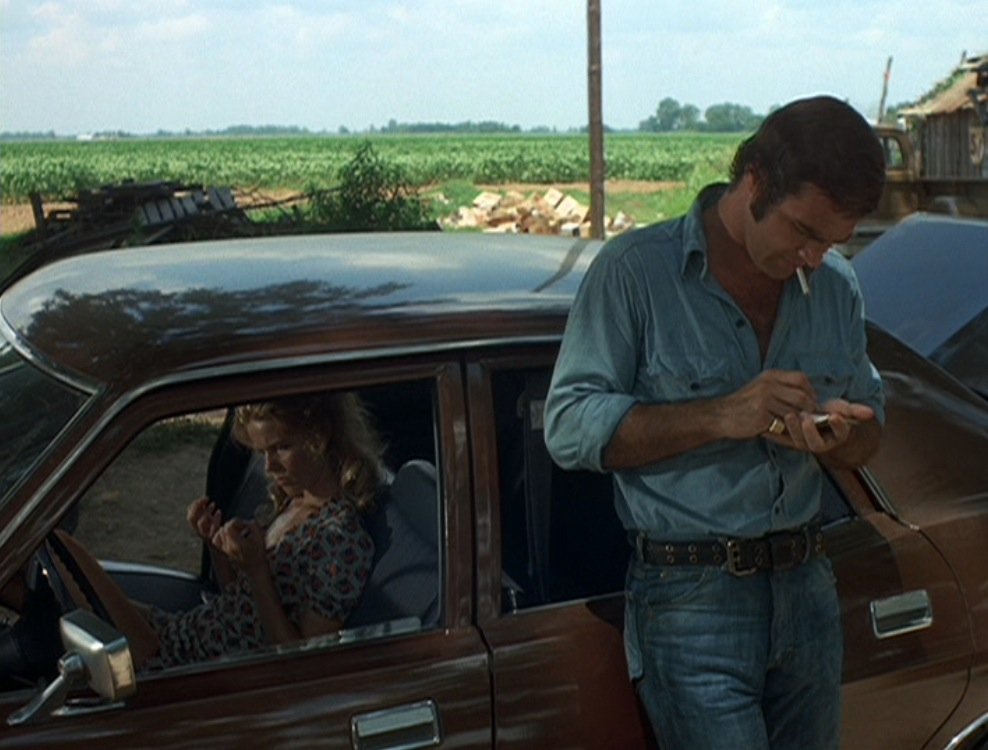 As Gator McKlusky in White Lightning (1973)

Reynolds was a movie star, to be sure, but in the latter part of the 70s his filmography was marked by his fascination with the second unit, the society of stuntmen, daredevil drivers and horse wranglers from which his Hustle co-star Ben Johnson had emerged years ago. It began, perhaps, with Deliverance, a film in which the leads risked their own necks in the whitewater rapids.

More than Boorman or Aldrich or Bogdanovich, though, the defining directorial pairing of Reynolds’s career for most of the public at large was with Hal Needham, the Memphis-born stunt coordinator-cum-filmmaker who made his feature debut, thanks to Burt’s industry pull, with the rambunctious, Reynolds-starring Smokey and the Bandit (1977). The result was a titanic hit, and the two paired for three more pickin’-and-grinnin’-scored demolition derbies: Hooper, The Cannonball Run (1981) and Stroker Ace (1983).

Hooper in particular reads as a championing of working-class second unit culture against the cult of the aristocrat-auteur, with Robert Klein in that film playing some kind of insufferable amalgam of Bogdanovich and William Friedkin at their most egomaniacal. The Hawksian romp ends with a gauntlet run of suicidal driving and a blowout blooper reel, and I think it is not too much to imagine that Jackie Chan, Reynolds’s co-star in the Hong Kong co-produced The Cannonball Run and another action-comedy star who would develop an enormous rapport with his public, may have been taking notes. 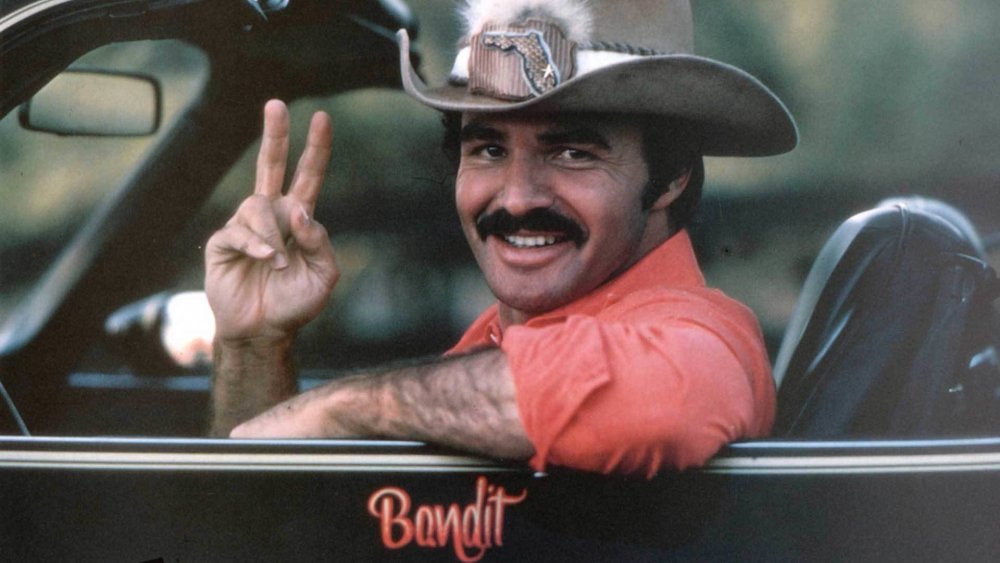 As a director, Reynolds retained a passion for stuntwork – see for example high fall expert Dar Robinson’s magnificent swan dive from a Miami balcony in Stick (1985) – but after the rather hokey drive-in crowd-pleaser Gator, he began to exhibit an attraction to material exhibiting a bleaker, more Aldrich-like worldview, like Stick, adapted from an Elmore Leonard novel, or Sharky’s Machine (1981), which is bolstered by a superb supporting cast, a real feeling for locker room-style ball-busting, and the photography of William A. Fraker.

For a moment it seemed that Reynolds, again following the model of Eastwood, was going to take an active hand in shaping and re-shaping his own persona, steering himself through middle-age as a semi-independent director-star – but he had not Eastwood’s imperturbability and eye for the bottom line, and his disappointments got the better of him. Stick was interfered with by the Universal Studios, who demanded reshoots with a father-daughter subplot to lighten the finished product, and the experience stung Reynolds, who by the time he finally directed another movie – 2001’s The Last Producer – was too long out of the game to be effective. 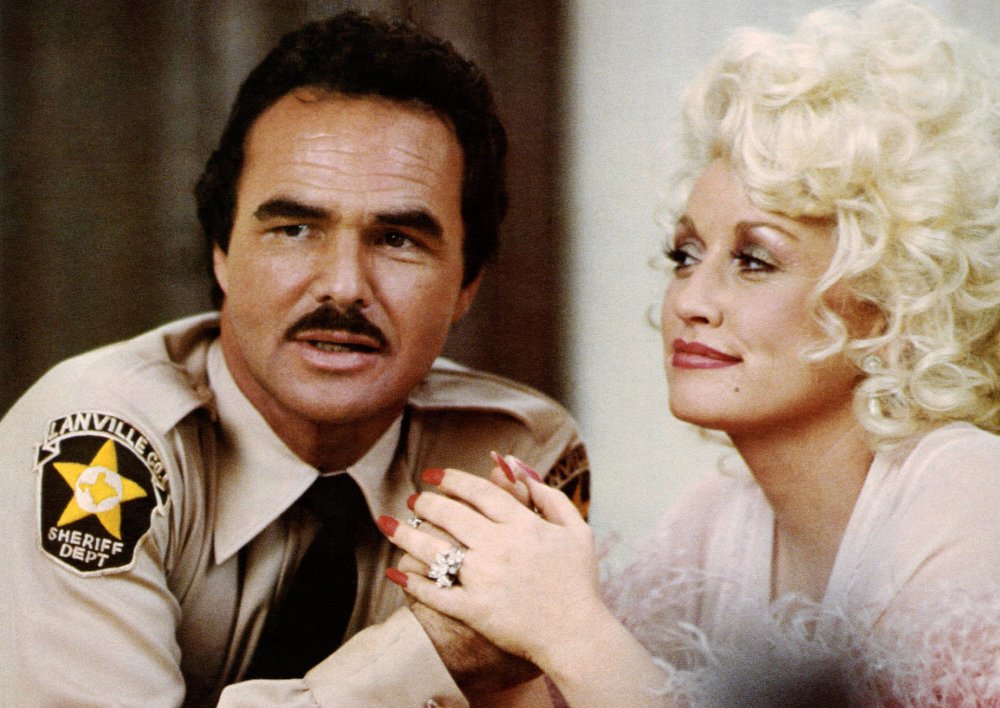 The early 80s, generally regarded as the beginning of his decline, in fact gave him some of his finest light comic roles in The Best Little Whorehouse in Texas (1982) and Blake Edwards’s very thorough, very Americanised remake of The Man Who Loved Women (1983), originally made in 1977 by François Truffaut. But while Reynolds had always radiated the easygoing, indifferent quality of what the Italians call menefreghista – defined by Nick Tosches in his biography of The Cannonball Run co-star Dean Martin as “one who does not give a fuck” – with the passage of time this came to seem less the quality of a freewheeling, pleasure-seeking loafer than of an aloof and indifferent man.

Formerly a jolly gigolo used to being desired as much as desiring himself, he had nevertheless never been a needy performer, and he didn’t give chase as his public drifted away, over time seeming to work only as his disorganised finances demanded. His divorce from wife Loni Anderson was catastrophically costly to both his bank account and public image, scuppering his return to television on the quite charming CBS sitcom Evening Shade (1990-94), on which he played a retired NFL player. On a 1995 appearance on The Tonight Show with Jay Leno, visible on YouTube, he can be seen in a testy exchange with fellow guest Mark Summers, a kid’s game show host. When the men are encouraged to settle their differences with PA-presented cream pies, Reynolds swings at Summers like he wants to take his head off. He spent his last years in his home state of Florida, keeping a low profile, watching Seminoles football and occasionally appearing in largely unseen indies like the unheralded Art Basel-set Miami Love Affair, seemingly his final role. 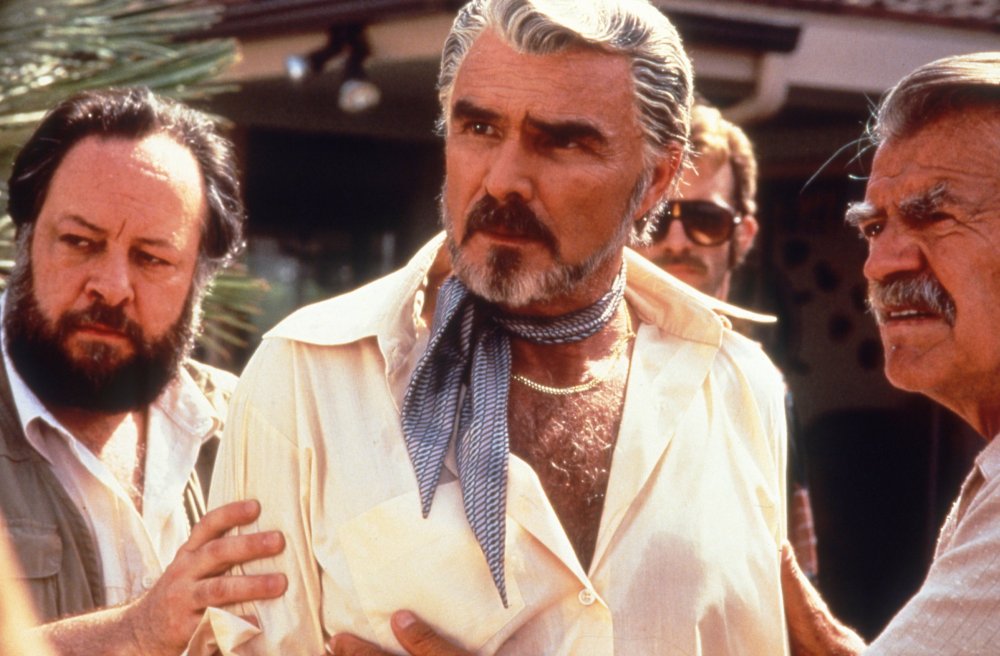 For all the failed USFL franchises and the bankruptcies and the painkiller popping, however, this is not a cautionary tale: a jock who turned to acting as a consolation prize, Burt did damn well for himself, thank you very much. He was excellent at living legends and has-beens, and even his living legends had an air of knowing that a legend was just a has-been in the making. The one thing he could never convincingly play, even in his leonine later years, was a never-was, for he had the air of one who walks the earth with the remembered roar of the sidelines in his ears – a stud, a strutting schmuck, and an undeniable star.