Lucky: days and years with Harry Dean Stanton, by his friend and PA Logan Sparks

Longtime personal assistant and friend to the late character-actor legend Harry Dean Stanton, Logan Sparks also co-wrote and -produced the actor’s final role, as the lead in Lucky. Here he shares his memories, video clips and photos on the shoot and off it. Introduced by Leigh Singer. 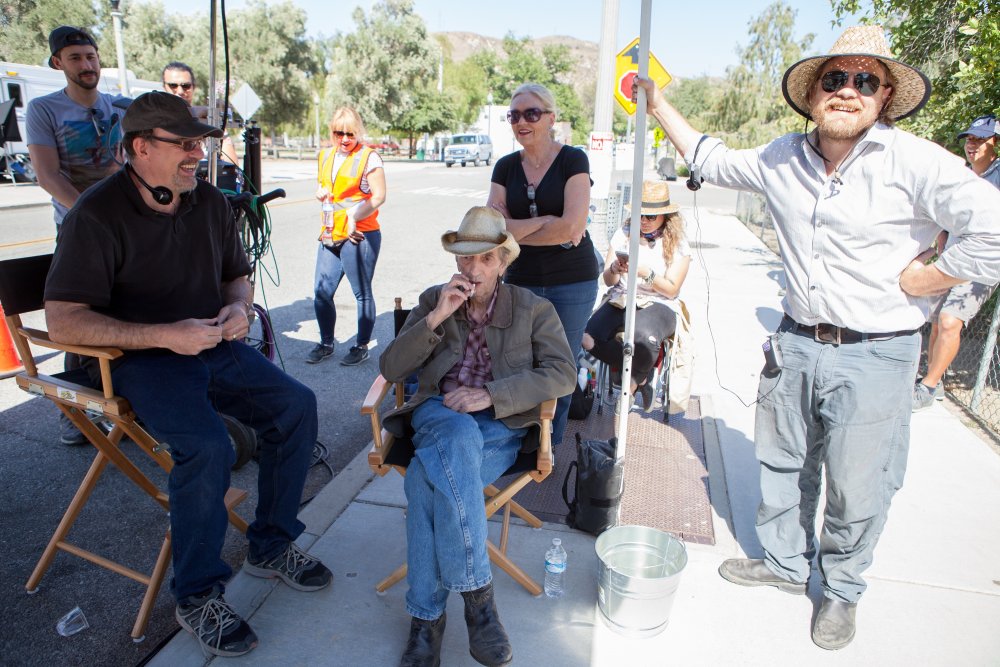 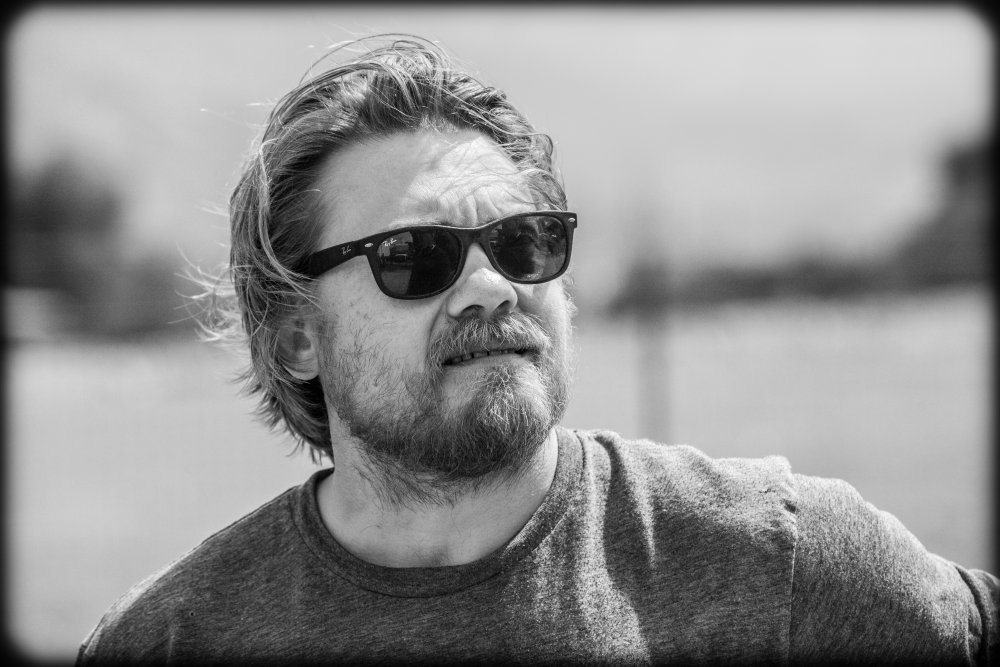 Lucky is out now in UK regional cinemas and on VodD.

Logan Sparks is the co-writer and co-producer of Lucky, the film that provides the late Harry Dean Stanton with a final lead role in a career stretching back 60-plus years, largely as one of American cinema’s most distinguished and distinctive character actors. Lucky, directed by the actor John Carroll Lynch (Fargo, Zodiac) and co-starring Stanton’s long-time friends Ed Begley Jr and filmmaker David Lynch, isn’t autobiography. But the story of a chain-smoking, fiercely self-sufficient ninety-something loner facing down death certainly has corollaries with Stanton’s own life.

Sparks should know. For 16 years he was Stanton’s personal assistant and they became, despite the 50 age-gap, best friends. Here, through exclusive and private photos and clips from the film, Sparks provides up-close-and-personal insights into Stanton and his movie swansong: yet more evidence of a true American independent. 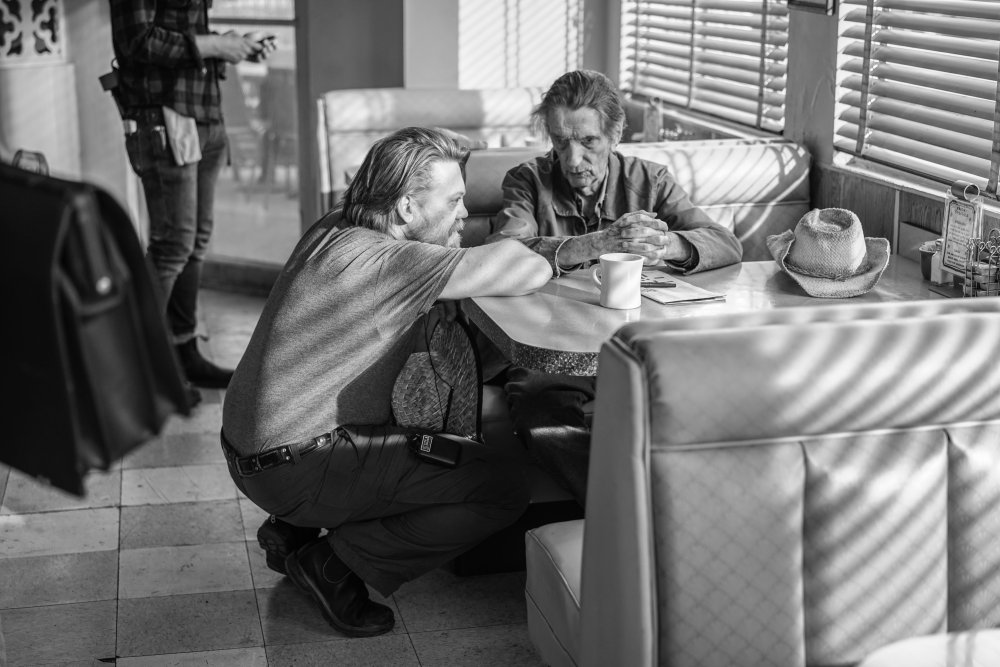 Late one fall afternoon in 2002, I met Harry. It wasn’t an auspicious occasion, it was just some indiscriminate afternoon. I was assigned to drive Harry for one day of filming on a TV pilot that would become Big Love. I was told by the production coordinator, “We need somebody to drive Harry Dean. We hear he’s kind of an asshole sometimes and he chain-smokes, so I immediately thought of you.” I put my cigarette out and said, “What the hell is that supposed to mean?” And then it was obvious.

As I walked into his living room a thin layer of undisturbed smoke hovered in the room. From a back bathroom I heard, “Hang on, pal.” Then suddenly he emerged and cut through the smoke, like a shark, cigarette and satchel in tow. I’m only realising now that when we shook hands that afternoon, I’d just met my best friend, my best man, my son’s namesake and that I’d end up holding that same hand 16 years later for his last breath. Just writing it out leaves me broken. It’s really hard to imagine a world without Harry Dean Stanton.

The scene with Ed Begley Jr. playing Dr. Christian Needler has a few funny things about it. First off, the dialogue was basically what doctors used to tell Harry. He’d been smoking since he was seven and at the time he was in his eighties with no significant health concerns. I once heard his doctor tell him, “I’d tell you to quit smoking, but I think that would probably kill you, so just keep doing what you’re doing.”

Also the character name, Dr. Christian Needler, we stole from the longtime maître d’ at [famous Los Angeles nightspot] Dan Tanas restaurant. When the real Christian Needler found out from Ed that we used his name, he asked me why, and I told him because there will be about a dozen people in this town who will find it hilarious. 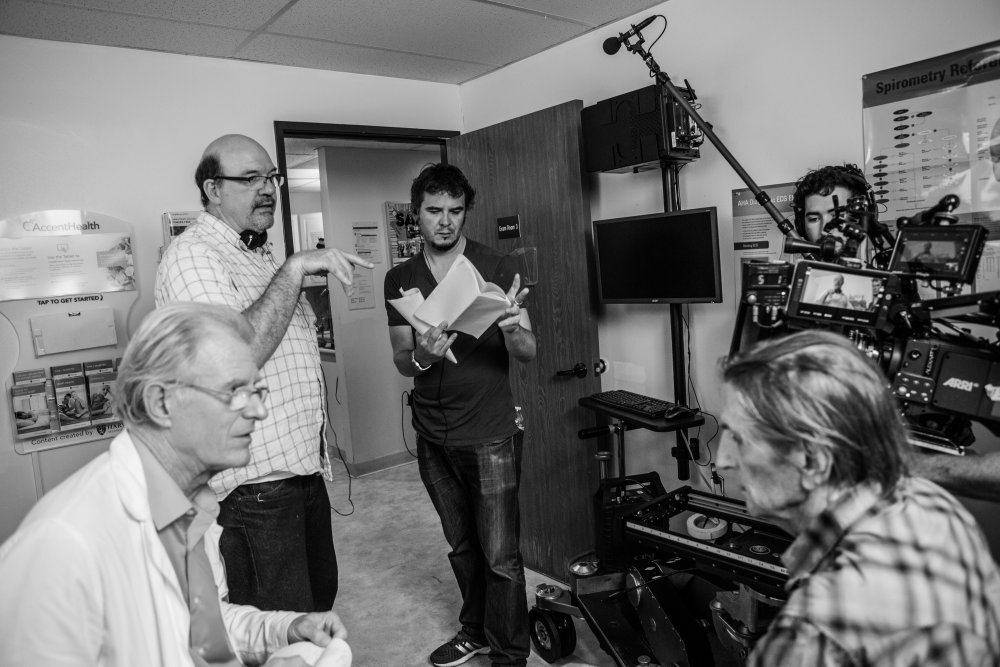 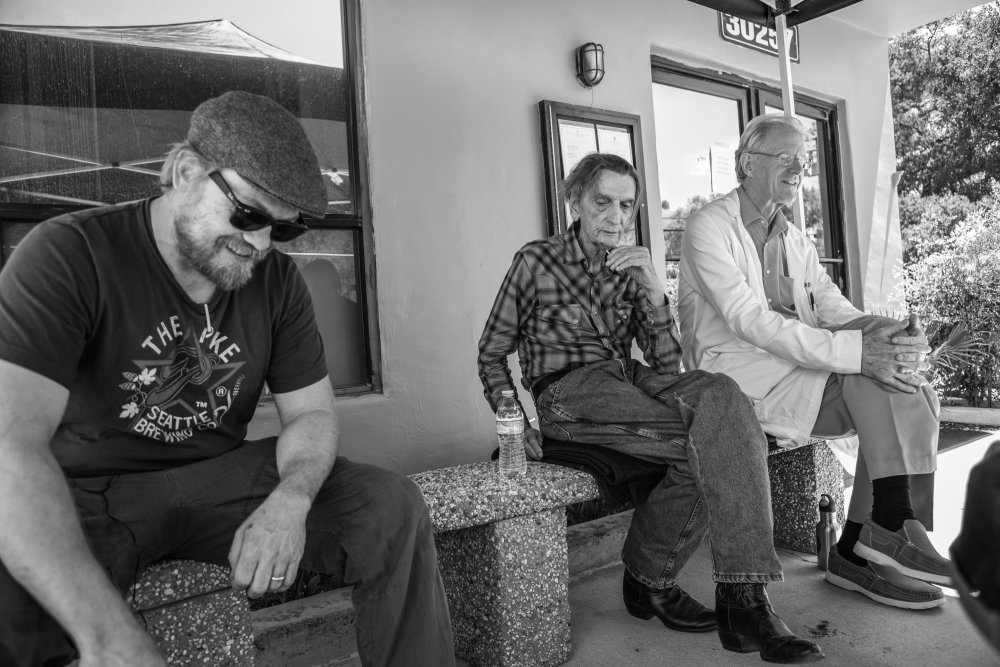 Ed was a friend of Harry’s for at least 40 years. They were drinking companions at Dan Tanas, and Ed used to make Harry laugh his ass off when he did his Dabney Coleman impression. That said, Ed and I became very close. Everyday Ed, [Los Angeles Times columnist] Patt Morrison and I would do the Times crossword puzzle. The rules were that you could use any book reference but no online help. We could also call each other for clues as well. All of this made for an hours-long process every morning. Ed is so smart, he does his in ink.

This is one of my favourite scenes. It has a beautifully slow pace to it, and I really get a sense of the length of time Lucky and [Lynch’s character] Howard have spent together. When Lucky says of Howard’s missing tortoise, “Hey, this is his best friend we’re talking about here,” a degree of compassion and understanding is revealed not seen prior. And because of it, the moment is very bittersweet.

The whole idea of a lost tortoise came from a joke my wife – who is a standup comedian – told in her set. It was about one time she saw a poster in her neighbourhood, and it read “Lost Tortoise”. And she thought, “How? Did it make a quick dash when you went for the mail?”

So when we gave Howard that MacGuffin, it all of a sudden dawned on us that the tortoise is really a metaphor for Lucky. Howard goes on to say, “He affected me,” just like Lucky. And when you think about it, Howard’s description of his pet can be applied to Lucky. And it doesn’t hurt to mention it is also a comment on Harry himself. 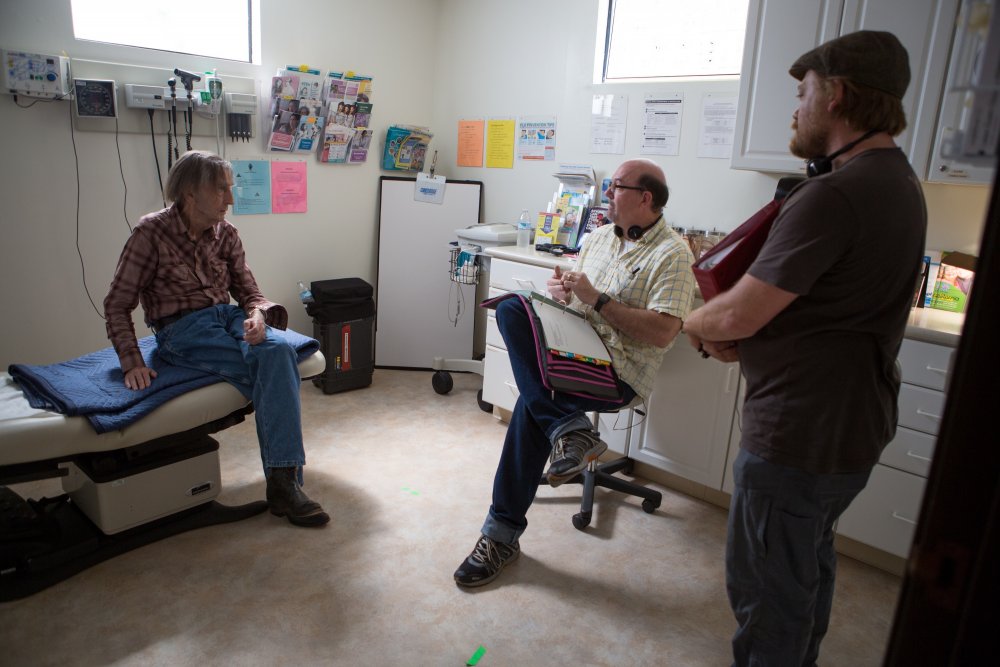 John Carroll Lynch and Harry developed a wonderful working relationship during the shoot. John comes from a storytelling background and was able to communicate with Harry all the nuances of what each scene had to accomplish. However, having been Harry’s right-hand man for 16 years, I was always standing by with our red script binder to interpret if need be.

The lady is my wife, Amy, and the dog is my dog, Fiona. This scene is very special to me for multiple reasons. The conversation gets to the heart of what is gnawing at Lucky. Nothing is permanent, there is no such thing as a ‘forever home’. Yet confronted with the meekest of animals in the pet shop he is compelled to free them. We see this gift Lucky bestows and in return the singing with which they reciprocate lulls him to sleep, no longer alone.

Filming this scene was difficult. The live birds were messing up the sound and we had to shut off the air con to help. It was hot, smelly and loud. But we pulled it off. On a personal note, when Amy looks up at the birds and says, “Aren’t they wonderful”, it makes me laugh every time. 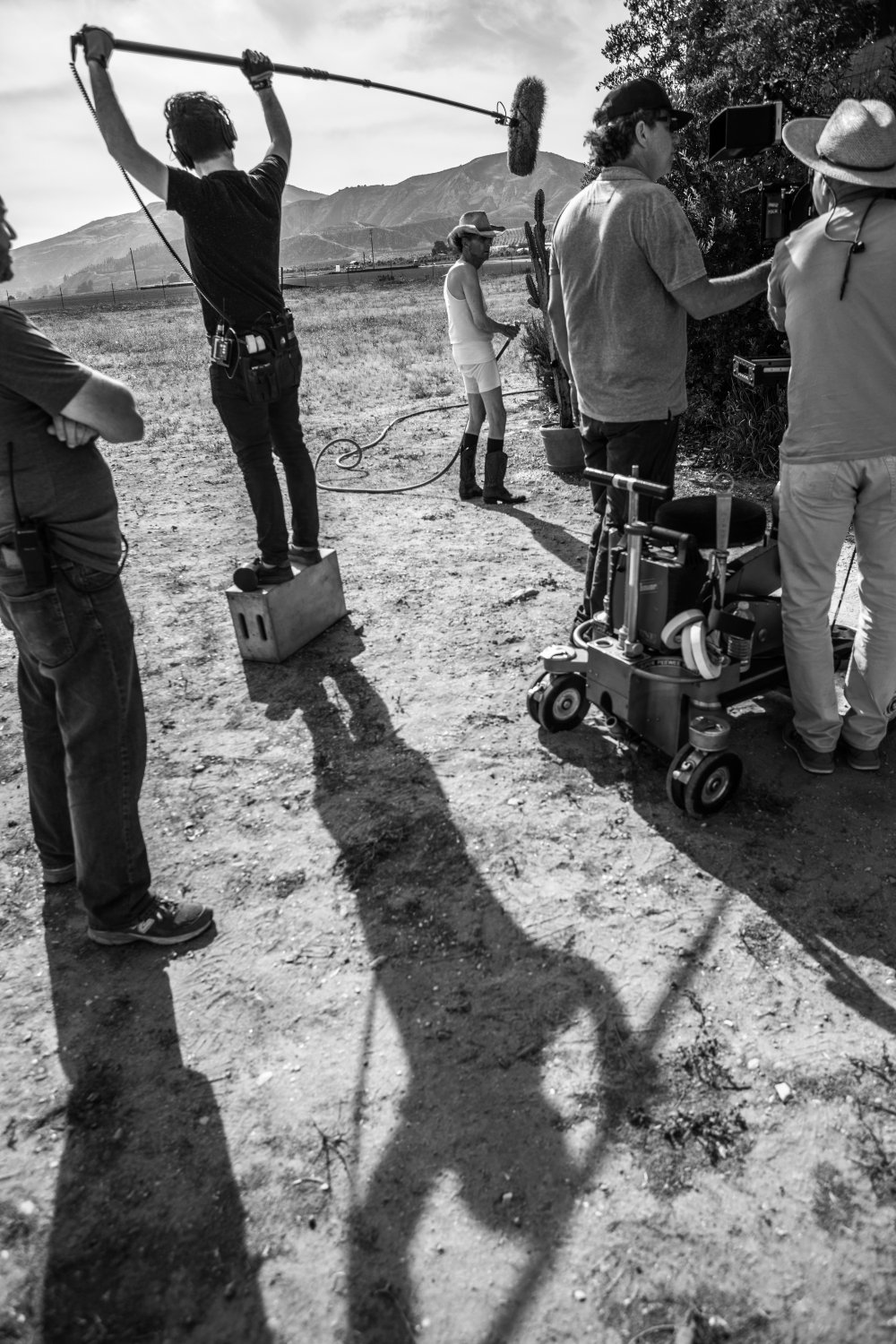 With all the room in the desert it’s still important to stay out of the shot. 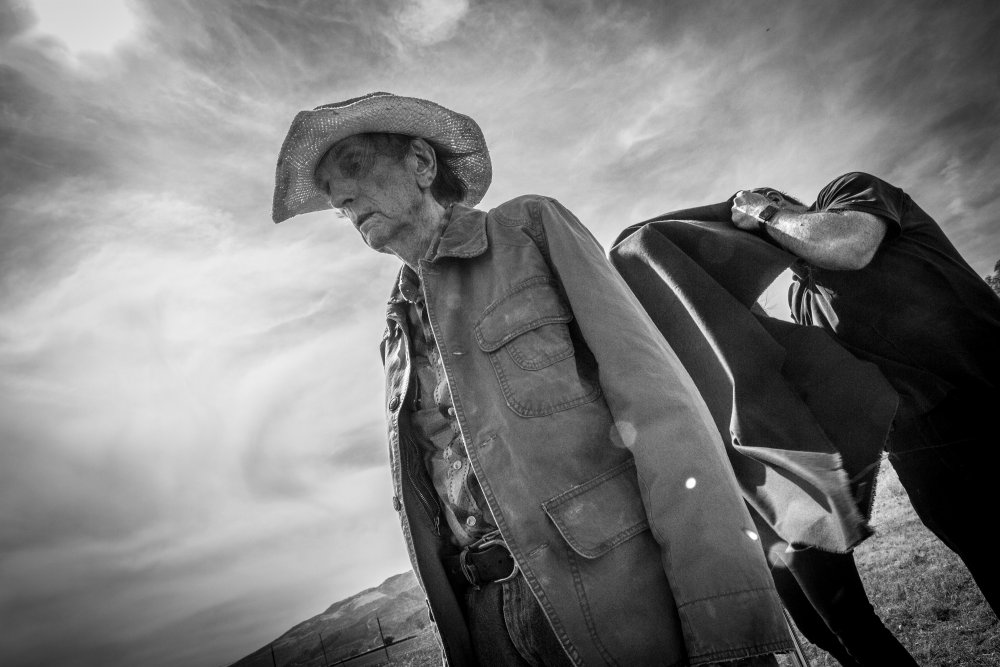 We scheduled Harry’s walking scenes to be easy on him physically. However it turned out to be one of the hottest days of the year. This reminds me of the old John Ford angles of John Wayne. Harry was indeed a monument and bigger than life.

The way we got David Lynch to join our cast is a pretty interesting story. We originally cast Sam Shepard in the part, but due to some unforeseen circumstances he dropped out. We had a little while before filming so we could afford to find the perfect Howard.

In that time span, Harry and I traveled to Seattle, Washington to film the newest Twin Peaks. Harry and David had a lifelong friendship and the reunion was reminiscent of long-time brothers. We were being led to set down a forest path through old trees that towered into the sky. Out of the belly of a giant tree trunk stepped David. “You have to see this,” he said as they hugged. We walked over and looked up and hundreds of feet up you could see daylight in the middle of the hollow tree trunk. It was spectacular. We stood in silence for more than a moment, both men with lit cigarettes. It was clear they enjoyed being silent together, and smoking.

Later, after the shoot, Harry suggested David play Howard and my jaw dropped. He would be perfect, I thought. I immediately called Michael Barile, who has been David’s executive assistant for more than a decade. He and I are friends as we have both signed non-disclosure agreements with our bosses, but we can talk to one another.

I said to him, “Can you put a script in front of David?” He said, “You got it”. He called me back later. He had read the script aloud on the way to set and David loved it. Michael said, “We’ll do it.” I said we needed three days; he gave me two days, six months later. I told Michael everyone is working for scale pay, he said David is doing it for Harry Dean, and he liked the script. It turned out perfect. 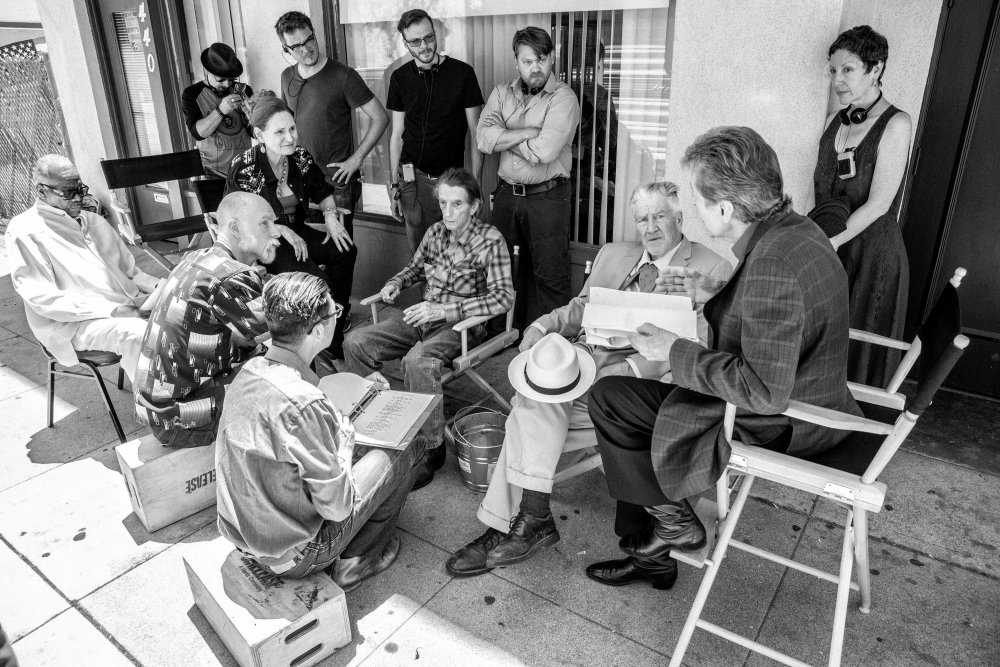 This is my favourite picture ever. Our photographer Stefania Rosini is a master at her craft. We call this The Eleventh Hour, as we were all working out the finale scene in the bar. Harry was conflicted about his dialogue, arguing that he was having an revelation in the scene. But it was my contention that Lucky was just now putting together all of the things he’s learned along his journey.

Shortly after this picture was taken, David turned to me and said, “Logan, my I make a suggestion?” Up until now David had never said anything about the film other than understanding his own existence in Lucky’s world, so I was taken aback. The group fell silent listening to David speak. He said, “Harry, you aren’t having a revelation, you’ve known this secret your whole life, you’re just now finding the words to manifest the idea.” Harry looked at me and said, “Well, what you think?” And after a beat I said, “I’m going to have to go with David Lynch on this one.” And we did, and it was perfect.

When Tom Skerritt walked on set, the squelch of the walkie-talkies lit up. Across the mic we heard “Viper is on deck!” All the PAs were using his call sign from Top Gun. That day was going to be awesome.

Harry Dean and Tom had not seen each other since they filmed Alien in 1979. We’re talking 36 years. As Tom approached Harry Dean, he said, “Harry Dean! You remember that time we changed sci-fi history forever?” Harry responded, “We’re still changing it, buddy.” They embraced and the day began.

Tom and Harry slipped back into an old rhythm very quickly. They talked a lot of the past, and of war. Tom had never fought but he worked extensively with veterans in the theatre, and he was deeply curious about some of his dialogue, which led to an hour-long conversation between the three of us about the World War II marines’ island-hopping campaign in the pacific. He is one of the kindest men I know. 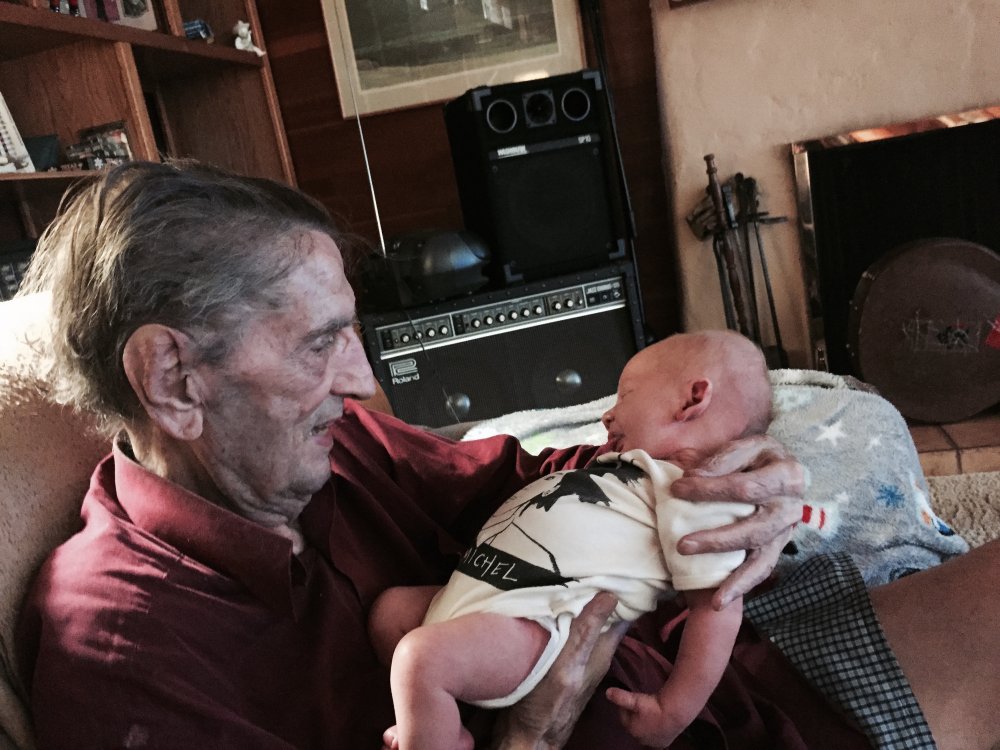 It was very hot the day we shot the mariachi scene, and Harry spent the day napping on my sofa, smoking and playing with my son Stanton.

I define my life into two chapters. Before I met Harry Dean Stanton and after. I was truly lucky to know Harry. Shortly before Lucky’s premiere, he took a turn for the worse and it became apparent Harry wasn’t going to be able to go. I have to tell you he was really disappointed about missing “the party”, as he called it. So I asked him if there was anything we could do in his place. He wrote out a few sentences and asked me to read them to his friends and the cast and crew.

I said, “You know, you’re going to win the Academy Award this year”.

He said, “I’ll be conspicuous by my absence… Are you going to go?”

He whispered, “I hate that kind of shit. You can go for me and if I get something, light a cigarette and tell the room they’re nothing.”

Related to Lucky: days and years with Harry Dean Stanton, by his friend and PA Logan Sparks