Raffey Cassidy and Natalie Portman play a mass-shooting survivor turned pop puppet coming apart at the seams in Brady Corbet’s turbo-burlesque, in which fame is just another form of assault. 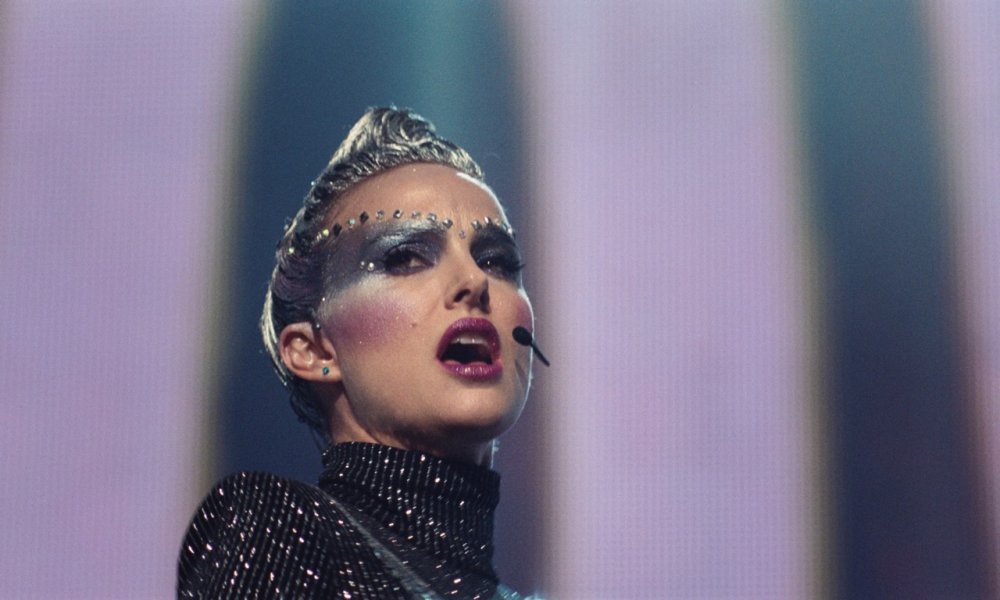 Brady Corbet’s precocious debut feature The Childhood of a Leader, a decades-spanning portrait of a fictional European dictator’s formative years, was an austere exercise in slow-burning dread. This follow-up is an altogether more bombastic affair, although it preserves its predecessor’s despairing world view.

It opens with Willem Dafoe’s unseen narrator describing a millennial pop sensation named Celeste, in a delightfully droll monologue that feels unsettlingly at odds with the grainy visuals and Scott Walker’s ominous orchestral score. It transpires that Corbet is bracing us with this discordant introduction for his protagonist’s harrowing origin story. We first meet Celeste as a squeaky-clean teenager (played by Raffey Cassidy) in 1999, moments before a schoolmate bursts into her classroom with an assault rifle and opens fire. Miraculously, she survives the massacre, and whilst recovering in hospital, writes a song with her older sister Eleanor (Stacey Martin), which she later performs at a memorial service for her fallen friends.

A mood of oppressive horror gives way to pitch-black humour, as Celeste’s earnest ditty (actually penned, along with other original songs, by Sia) becomes a healing anthem for a grieving America. It’s not long before music industry vultures are circling around her as if she were a fresh carcass. Under the questionable guidance of a gruffly jaded manager (Jude Law), she’s dragged all too roughly down the path to stardom, and sent on a recording trip to Stockholm that rapidly hastens her loss of innocence. After ill-advisedly hooking up with a British bad-boy rocker one night, she recounts to him a distressing recurring dream, in a manner that suggests she’s still grappling with PTSD. And if you hadn’t already been playing close attention to the turn-of-the-millenium setting, a pointed shot of the Twin Towers serves as a jolting reminder that further collective trauma lurks just around the corner.

Cut to 2017, and Celeste, now a drink and drug-addled industry veteran played by Natalie Portman, is having a hell of a day – hours before she’s due to perform a huge homecoming show, a mass shooting in Croatia is committed by assailants wearing masks made famous by one of her videos.

As brashly provocative as the first act may be, Portman’s outrageously over-the-top turn may still come as a shock. Channeling the performative theatricality of Lady Gaga and the imposing feistiness of Madonna, she’s gratingly cartoonish in her early scenes, delivering not so much a character as a physical manifestation of the corrosive effects of superstardom. But gradually, a more troubling vulnerability comes to the fore. Compelled during a press junket to comment on the day’s terrorist attack, she stumbles pathetically, unleashing a torrent of combative rhetoric inspired, our narrator informs us, by the tenor of political discourse in present-day America. And a scene in which she begs Law’s manager to get high with her before her concert forces us to reckon with the complicity of her enablers.

The sorry state Celeste ends up in as a consequence of her binge, hours before she’s due on stage, ensures an ostentatiously overwrought climax that tips its hat to Portman’s own defining star moment, her Oscar-winning turn as disturbed ballerina Nina in Darren Aronofsky’s Black Swan. But where Nina channels her demons into virtuoso dance displays, perhaps the cruellest joke of all here is that Celeste is a somewhat unremarkable performer, reliant as much on pyrotechnics and costume changes to dazzle her fans as she is raw musical talent. As such, Corbet steers away from glamorising the notion of suffering for one’s art, ensuring that his sharp social satire remains on firm moral ground.