Missing People review: Béla Tarr shines a light for the homeless in Vienna

Presented for a limited time only as part of the Wiener Festwochen festival, Tarr’s latest work blends film, performance and visual art into an empathetic event that bridges the physical and political space between communities. 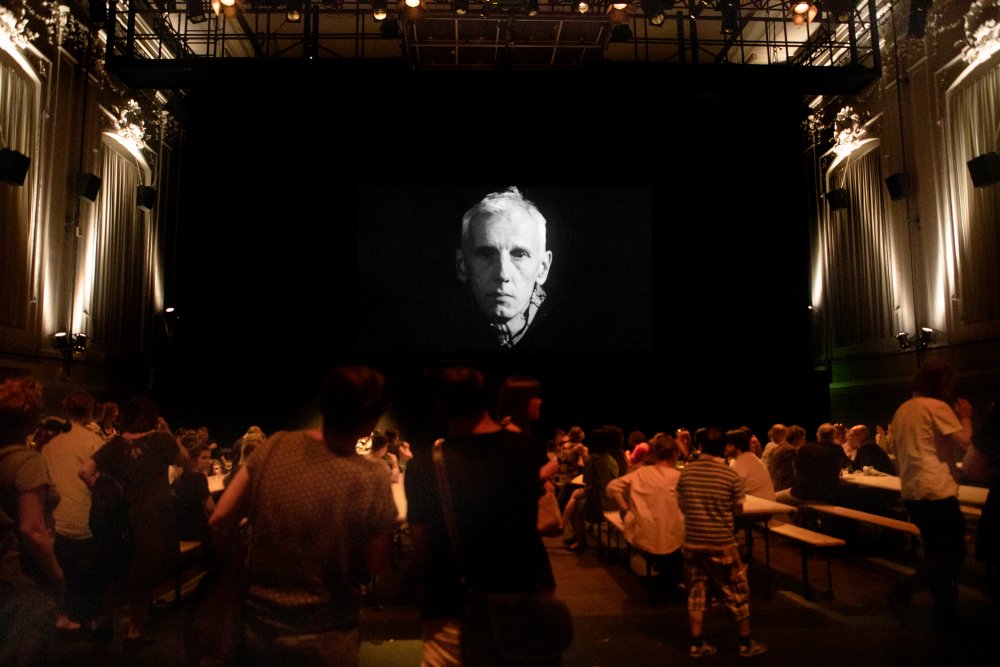 The interior of Halle E in Vienna’s MuseumsQuartier is lit bright red as if for a party. On a glitter-strewn stretch of scarlet carpet, several tall buffet tables are strewn with dirty plates, half-empty glasses and bottles, like the aftermath of a society ball. When the lights go down, the audience – seated on benches running down the sides of the room – looks up at a screen showing a room lit in red, as the camera tracks around to scan tables, plates, bottles…

Missing People was screened in Halle E at MuseumsQuartier Vienna from 13 June to 16 June, as part of the Wiener Festwochen arts festival 2019.

If it’s not disconcerting enough that the film shows the very room we’re sitting in, there’s the additional shock of seeing a work by Béla Tarr that begins in vivid colour (although it soon fades to his familiar black and white). But Missing People isn’t strictly a film: the Hungarian auteur announced that he was abandoning cinema for good, following his 2011 feature The Turin Horse. Missing People is one of only two pieces he has made since, the other being a brief portrait of a young Sarajevo busker for his 2017 exhibition at Amsterdam’s Eye Filmmuseum. His latest work, Tarr insists, is not a return to cinema but “a real epilogue to my oeuvre”. Rather, it is a site-specific screening – with an element of ceremony-like performance piece – of a film shot specially for this venue and this occasion. After eight sittings over four days – as part of the city’s Wiener Festwochen arts festival – it will never be seen again. 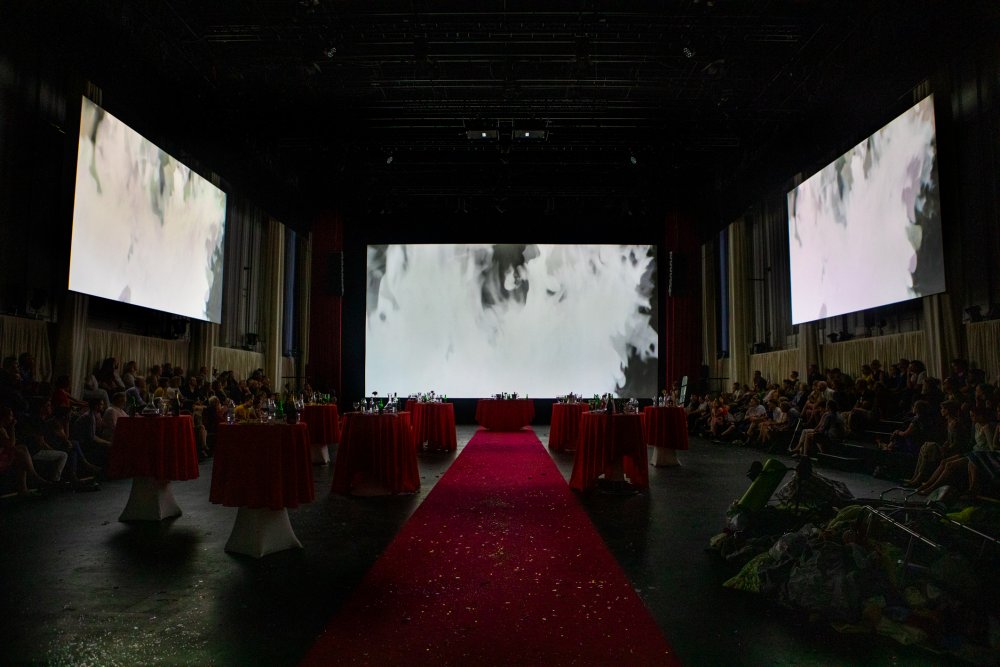 Tarr tells me that Missing People can be called “a kind of hymn”. He made it with members of Vienna’s homeless population, spending six months getting to know people in the city’s shelters, then filming some 200 of them over five days in April, in Halle E itself.

Shown on three cinema-size screens, the footage – shot by Tarr’s long-standing collaborator Fred Kelemen – shows a group of homeless people entering the hall and making it their space. At the start, they line up before the camera, a tough-looking youngish man in a wheelchair positioned up front like their leader; he later patrols the room, the camera tracking around with him as he keeps a vigil over the others’ sleep. We also see some of the crowd feasting and drinking at the tables, recalling the ‘beggars’ banquet’ sequence of Buñuel’s Viridiana or Brueghel’s paintings – the latter an enduring influence of Tarr’s. Have they crashed the remains of a gala, or was this celebration in their honour all along?

In between ensemble episodes, the camera studies individual figures: an elderly man who plays the pan pipes and sings in a language possibly all his own; a bald man who painstakingly sprays himself silver before striking a pose as a ‘living statue’, his means of making a living on the streets; one woman embroidering, another reading the Lord’s Prayer in Hungarian… Perhaps most movingly, a stout couple in late middle age huddle together, at one point exchanging a gentle kiss. All this plays out to the hypnotically droning recorded organ accompaniment by regular Tarr composer Mihaly Vig. 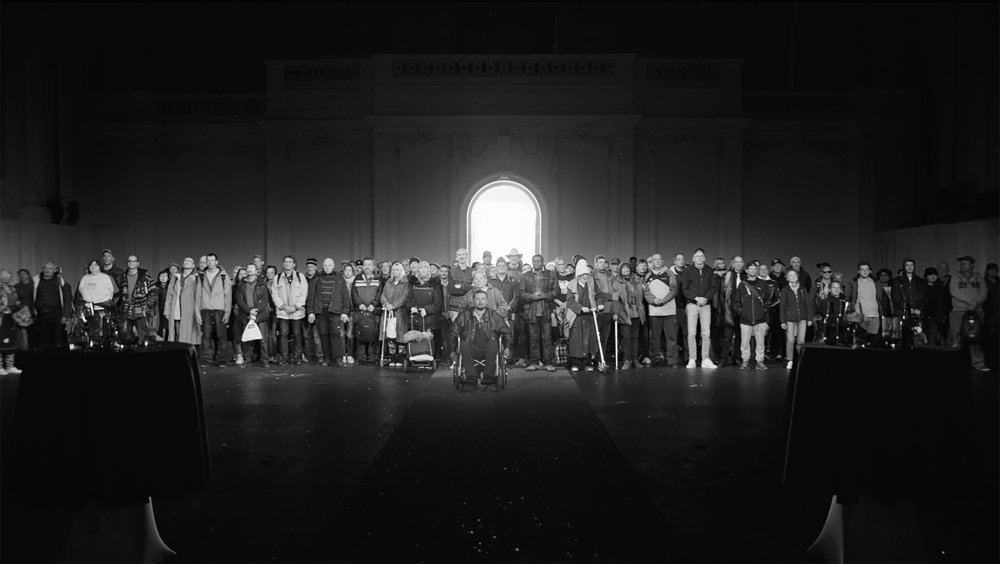 After 90 minutes or so, the people have gone and the camera floats over an ocean of possessions they have left behind: bags, blankets, coats, all traces of people fated always to be invisible in the world. Then, a coup de théâtre: the screen at the end of the room rises to reveal another large space with long refectory tables and benches, and a live accordionist playing a melancholy tango. We queue at a bar for wine or beer – all these paying customers being stood a drink by the homeless – while portrait images of Missing People’s participants are projected on another screen. One by one they appear in richly textured chiaroscuro, giving us time to observe the faces – variously hopeful, haggard, questioning or ravaged – of people who have lived through things that few of us here tonight will ever be able to imagine.

The previous day, Tarr had held a preview for his cast, inviting them by putting the word out around the city’s shelters. “We have a network – and half of them have mobiles, and they use the internet,” he says. However, some participants have died since the shoot, while one, a Slovakian Gypsy, has disappeared, possibly deported.

The idea for the production came partly from the passing of a Hungarian law classifying homeless people as criminals. Vienna’s homeless, Tarr says, come from all over Eastern Europe, and many don’t speak German at all – “but we found a language”. In his visits to the shelters, he came to know the people and their stories. “Most of the reasons they’re homeless are personal tragedies: divorces, alcohol or drug addiction, or just an accident is enough. If you’re on the street for three weeks, it’s over – there’s no way back.” The man with the wheelchair “is a Hungarian guy from the lowlands, he had an accident. He’s very intelligent, I love him very much. I love all of them. You cannot do this shit if you don’t love them.” 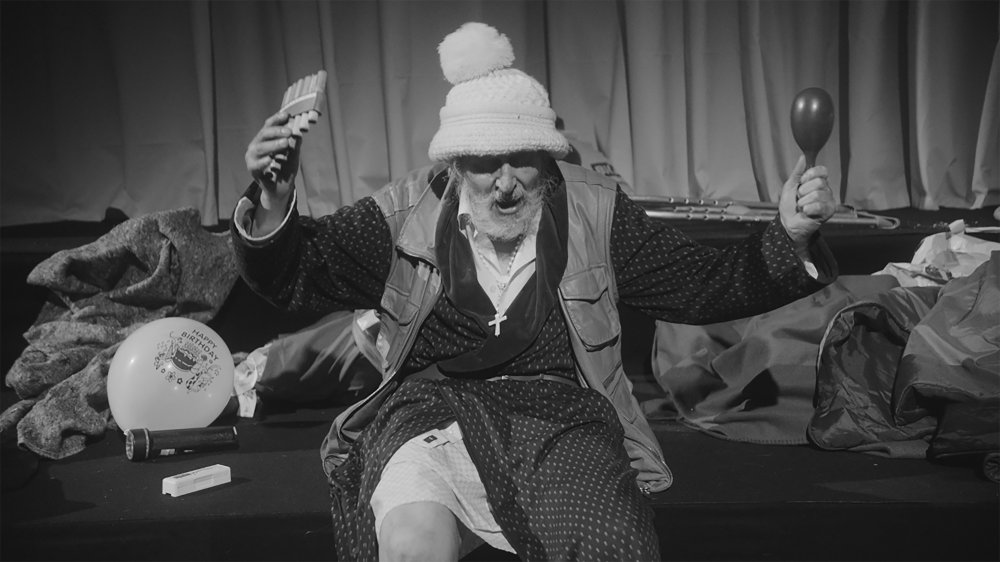 The cast of Missing People live in a strict cyclical pattern, Tarr says: “Day shelter, night shelter, begging. But it’s an existential question: do we do different things? Maybe our circle is just a little bit bigger. It’s just that we’re part of society – but what are we producing? Just fucking profit?” Not least, Tarr says, Missing People is about “capitalism and the inhuman system that we have. If you’re not productive, you’re out.”

Deeply moving in its starkly unsentimental beauty, Missing People comes across as an act of solidarity and empathy. It is also a political gesture, made outside the economy of film production, to be seen only a handful of times before itself going missing. Tarr acknowledges the incongruity of having a privileged arts audience pay to watch the homeless; the work plays on that, seating us on the very same benches as his subjects. What he wants viewers to feel is “just that you’re not so different from them. Or maybe the difference is temporary.” As for the work’s ephemerality: “If you remember this evening in 20 years, there’s no contradiction.”

Related to Missing People review: Béla Tarr shines a light for the homeless in Vienna