Film of the week: Loro satirises Silvio Berlusconi and his critics 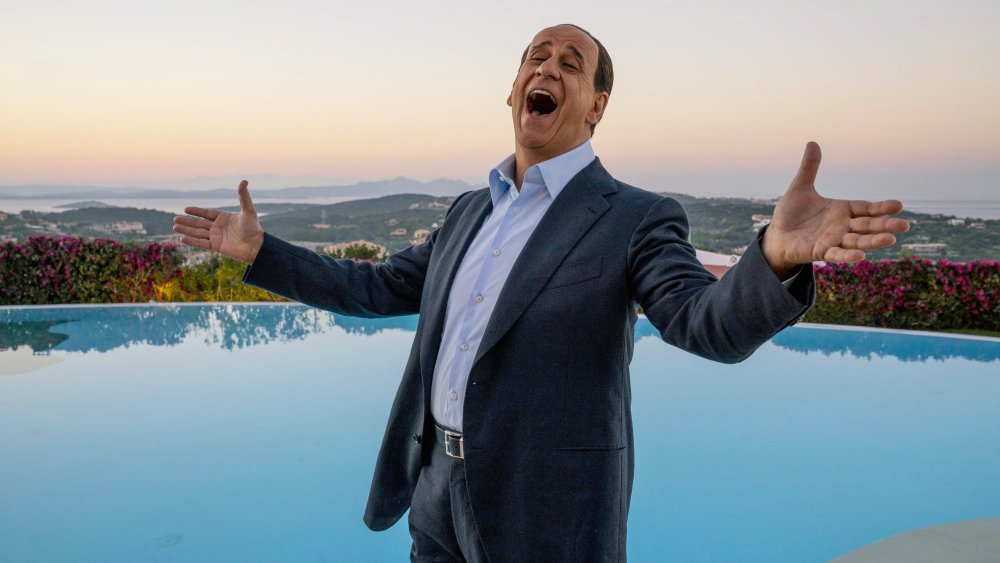 ‘Loro’ means ‘them’ in Italian; ‘lui, lui’ means ‘him, him’, and ‘he’ is to all intents and purposes Silvio Berlusconi. It’s only after provincial pimp Sergio and latter-day courtesan Kira have been chewed up and spat out by the Berlusconi in-crowd that they rue having underestimated ‘them’, and director Paolo Sorrentino takes pains not to underestimate him, or have us underestimate him.

But who are we? Outside, above, in a position to judge? Or inside, mixed up, compromised? The first part of Loro, before Berlusconi makes his entrance, is a parade of mid-2000s, pre-crash Eurotrash, a spectacle of bad taste, in spectacularly bad taste – at least by the standards of an etiolated cultural establishment that had little more than canons of taste to offer in the face of Berlusconi’s success. As it unfolds, Sorrentino’s satire proves to be as much at the expense of ‘us’ as of ‘them’.

The film is a sequel of sorts to Il divo (2008), Sorrentino’s dazzling biopic of Giulio Andreotti, one of Berlusconi’s predecessors as Italian prime minister. That film, mostly set in 1992, after Andreotti’s best days had passed, reflected on the comprehensive destruction, amid multiple corruption scandals, of the established political parties, above all the Christian Democrats, that enabled Berlusconi to take power in 1994. Similarly, the events of Loro mostly take place in 2006-08, during the aftermath of Berlusconi’s longest period in office.

The two men are played by Toni Servillo, in both cases on the edge of caricature. Whereas his Andreotti was an inscrutable goblin, sardonic and calculating, the Berlusconi of Loro is transparent, a cruise-ship entertainer turned salesman whom plastic surgery has given a permanently open-faced expression. Andreotti, and Servillo’s character in The Great Beauty (2013), required voiceover narration to make their thoughts known; not so Berlusconi. 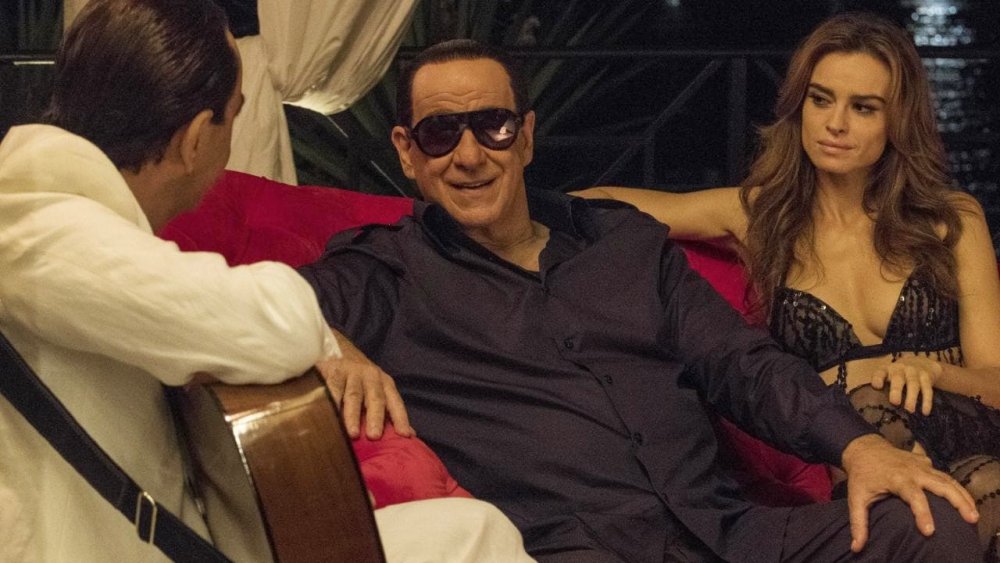 On its release in Italy, Loro was split into two full-length parts, with Berlusconi appearing only towards the end of the first. In the international single-film version, shorn of about 50 minutes, the delay is still pronounced. The rise of Sergio (Riccardo Scamarcio) and his partner Tamara (Euridice Axen) from Taranto to Rome, with the object of winning a place at Berlusconi’s table, is done as a non-violent but no less cocaine-fuelled Goodfellas (1990) to the point of using a cover of Harry Nilsson’s Jump into the Fire in one montage sequence.

To get there, they – and Kira (Kasia Smutniak) – exploit young women to win the favours of venal politicians and bureaucrats. The world of ‘loro’ is easily understood as the one that Berlusconi built, even before he went into politics, as the dominant force in Italian television, meagre casting opportunities being one currency in which the women are paid – though in fact these women are themselves made currency for transactions among powerful men.

By keeping Berlusconi in the wings, Sorrentino builds up the mystique of ‘lui, lui’ while also showing it to be a convenient excuse. Santino (Fabrizio Bentivoglio), a former minister who aims to topple Berlusconi from the party leadership and enters into a mutually exploitative relationship with Tamara, has no significant policy differences from the boss, and if anything lower standards of personal conduct. There is the barest glimmer of real dissent on screen, and Sorrentino’s treatment is at most lightly ironic, right until the end of this first act, when it becomes parodically obvious. The Rome sequences culminate in a piece of symbolism that comes across as a joke at the expense of the idea of subtlety: a garbage truck, swerving to avoid running over a rat, crashing into some ancient ruins, its contents bursting over the dolled-up women being chaperoned by Sergio and Tamara to their next party. 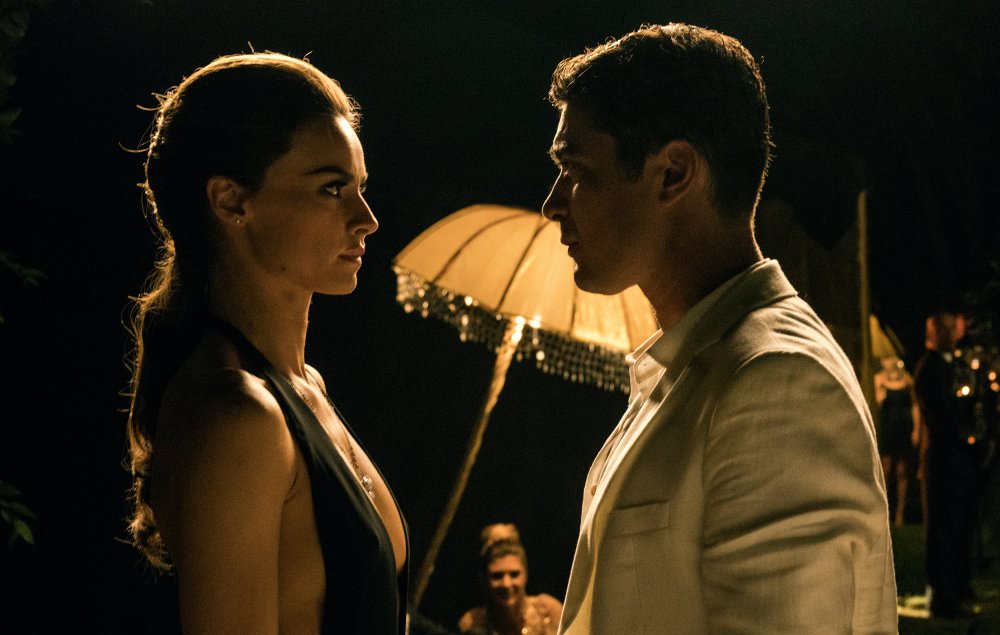 Kasia Smutniak as Kira and Riccardo Scamarcio as Sergio Morra

The falling rubbish becomes a shower of ecstasy tablets, and the scene moves to the Sardinian villa that Sergio has rented to impress Berlusconi, who since his defeat in the 2006 general election spends much of his time on the island. But still Berlusconi himself does not appear, and the extended sequence that unfolds there – an all-night pool party whose aesthetic is best summed up as Hedkandi – takes the film to the brink of narrative exhaustion.

Structurally, the build-up is masterly; the switch to Berlusconi comes at the last tolerable moment. From then on, Servillo and Elena Sofia Ricci, playing Berlusconi’s second wife Veronica Lario, dominate the action, and both are outstanding. It is only to be expected that Sorrentino and Servillo’s Berlusconi is more sympathetic than one might have expected. The alternative is too boring to contemplate, and it is probably not for legal reasons alone that Loro begins with a disclaimer disavowing any relation at all with anything.

This version of Berlusconi, always just ‘Silvio’ in the film, is a man trying to rediscover the secret of his success – with Veronica, among the political class, and with the Italian public. Sergio and his women scarcely register. The script, by Sorrentino and Umberto Contarello, sings in scene after scene, perhaps above all when, in preparation for his attempt at a political comeback, Berlusconi calls a woman plucked at random from the phone book to sell her an apartment that hasn’t been built yet, like in the old days (Berlusconi’s media empire grew out of a cable channel serving one of his property developments in Milan). She tells him that he sounds like a swindler, but the key to Loro’s Berlusconi is that he is without shame, and cannot take offence. Of course he is vain, believing himself able to “read the script of life”, but his vanity too is there on the surface, acknowledged. 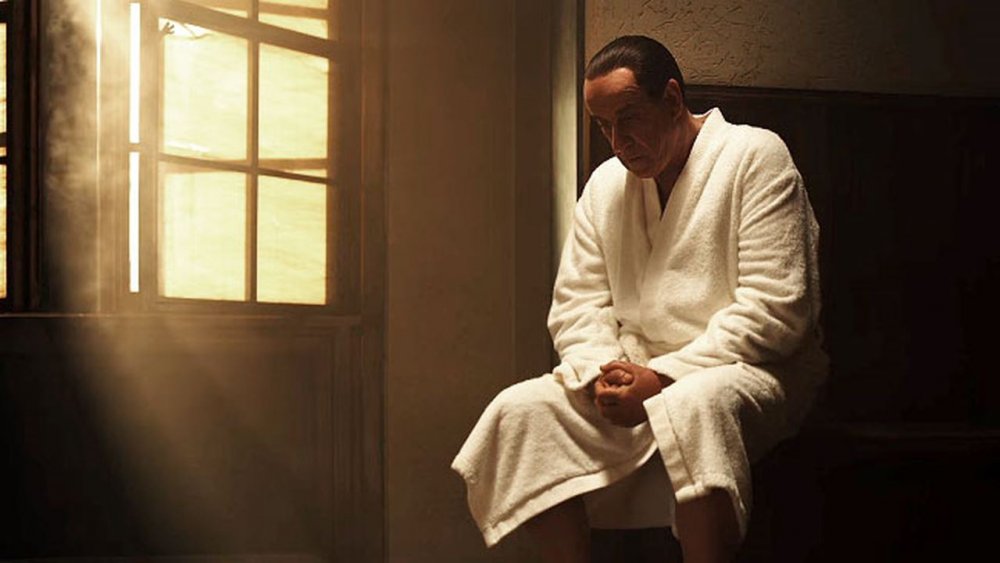 When Berlusconi, in Veronica’s absence, finally deigns to attend one of Sergio’s parties, having seen through his ploy from the start, Sorrentino refrains – in a film that does not generally hold back – from showing him do more than watch, and here it can be said that the dice are loaded a little too much in his favour. There is a certain inevitability that among the scores of glossy women Sergio, Tamara and Kira have rounded up, Berlusconi sets his cap at Stella (Alice Pagani), an aspiring actress, the only one without regulation long hair, and the only one who refuses to laugh at his jokes. In this way, Berlusconi, despite it all, is shown to be a man of taste, and of course Stella turns him down.

One of the benefits of the disclaimer, and the fictionalisation of most of the characters in Berlusconi’s orbit that it enables, is that Loro does not become mired in complexity as Il divo did; in that respect, despite its main subject’s absence for much of the first hour, Loro is a more conventionally dramatised film. The critical voices by which Berlusconi was assailed, and the many legal actions bearing down upon him, tend to be relayed through – indeed, in the former case endorsed by – Veronica, who becomes the voice of ‘us’, the assumed critical audience. It is she who makes disobliging comparisons between her husband’s limited cultural horizons and those of Gianni Agnelli – the Fiat magnate, owner of Juventus and international playboy who commissioned a portrait from Francis Bacon. But Berlusconi never felt Andreotti’s sense of inferiority among the cultural elite, and the climactic showdown with Veronica is riveting.

The film ends strangely, with Berlusconi – now prime minister once more – apparently doing right by the victims of the 2009 L’Aquila earthquake, and building replacement accommodation without undue delay; we see a young relation of an elderly woman taking possession of her new flat – immediately filled with the sounds and images of television – reacting with distaste, but it is not clear enough why.

Related to Film of the week: Loro satirises Silvio Berlusconi and his critics