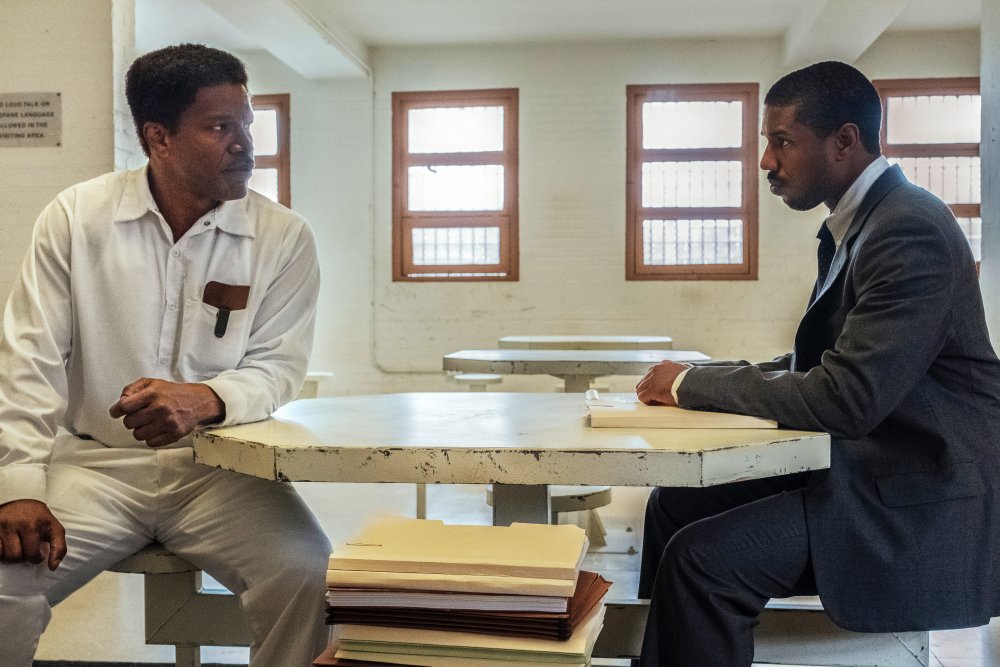 Based on a book by American lawyer and activist Bryan Stevenson – here played by Michael B. Jordan – Just Mercy tells the story of Stevenson’s founding of the Equal Justice Initiative (EJI), a non-profit organisation that has, to date, saved 125 men from the death penalty. The case that takes up the film’s focus is that of Walter ‘Johnny D’ McMillian (Jamie Foxx), a man wrongfully sentenced to death for the murder of a white woman.

Director and co-writer Destin Daniel Cretton structures the film as a procedural legal drama, observing the case from the early 1980s through to the eventual retrial in 1992. Alabama, at this point still practicing the death penalty (and, like many US prisons, slave labour), is shown as a state not even bothering to hide its systemic racial prejudice. The entire system, from beat cop to DA, is rigged to funnel black people like McMillian into jail and kill them within the means of the law.

Creton, who made his name directing star-making performances in Short Term 12 (including that of Brie Larson, back here as Eva Ansley, the EJI’s Operations Director), again elicits strong character work across the board – personable, warm and extremely affecting, particularly in the interactions between Stevenson and McMillian’s family and neighbours. In the wake of a string of great performances in Michael Jordan’s works with Ryan Coogler, this is another confirmation of his power as a movie star; even as Stevenson he emanates charisma, being consistently magnetic and expressive without being showy.

Foxx is just as excellent, putting in some of his best work in years. O’Shea Jackson is another bright spot, in a fairly brief role as a man convicted almost purely on the basis that the judge thought he “looked like a murderer”. Throughout, Cretton and co-writer Andrew Lanham’s dialogue has the inmates on death row assail the institution of death row with the matter-of-factness of people with nothing left to lose – but they’re drawn as characters with rich interior lives, rather than being mere mouthpieces for the filmmaker’s ideals.

That said, the film has a habit of overstating some of the film’s more obvious elements – foregrounding the fact that the town is where Harper Lee wrote To Kill a Mockingbird in a newsreel towards the film’s opening, later hammering that ironic point home when the DA suggests Stevenson goes to the Harper Lee museum after denying him access to a file that might prove McMillian’s innocence. In a similar vein is the treatment of Larson’s Ansley, whose character amounts to an embodiment of white guilt. She’s there to act appalled at some everyday (but horrible) occurrences described by Jordan’s character, not given much to do beyond repeatedly saying “I’m sorry.”

For the most part, the performances help Cretton’s penchant for overstatement go down smoothly, as well as helping to drum up palpable emotion and anger over the dehumanisation of black people and death row inmates that is of course an ongoing, corrosive issue in the US. This comes to a head in the film’s most harrowing scene, in which Bryan witnesses one of his clients being executed and the other inmates make as much noise as possible to show their love for their fellow man. It’s a story that’s been told time and again, yes, but one that keeps needing to be told – and when a film such as this is capable of inspiring passionate anger about injustice, that’s worthwhile in itself.