Film of the week: National Gallery

Indefatigable documentary master Frederick Wiseman shows us the show and its making. 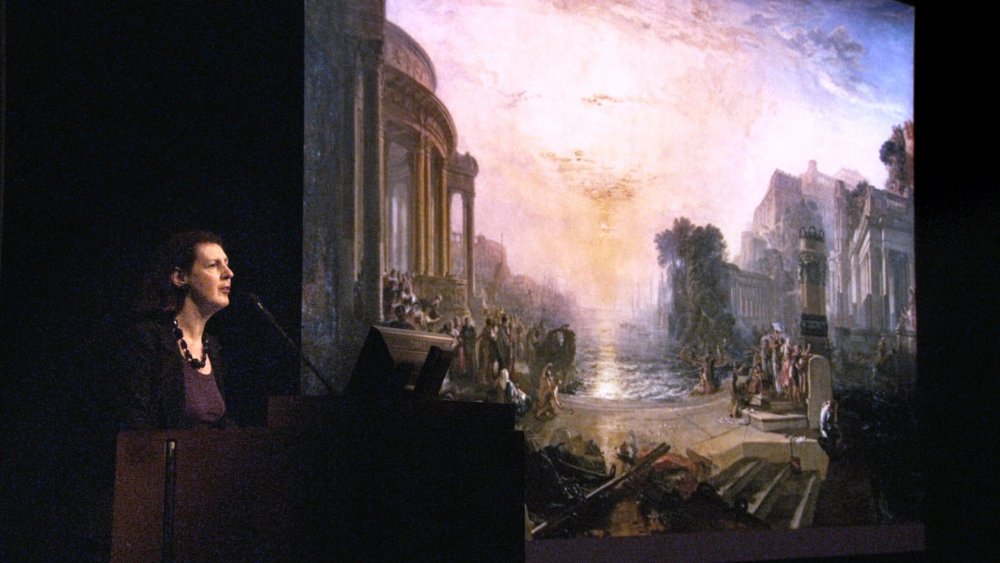 We find ourselves in a new, digital golden age of nonfiction cinema. Thanks to diminished costs across the board, we now live in a culturescape where, like the one in seven East German citizens who informed for the Stasi, a ridiculous percentage of us are documenting the rest, with a vast array of machines and agendas. And we’re all watching.

Frederick Wiseman is something like the Methuselah prophet in this weft, a tireless, methodical monk inserting his camera into every quotidian alleyway of modern life for 47 years now, compiling a vast Alexandrian archive of the Way We Live Now – which of course has changed with the decades. Usually focusing on institutions and the subcultures that feed them, Wiseman has always neglected quirk and extravagance, looking instead at work, ageing, illness, commerce and personal catastrophe, and if the gimlet eye he used to cast on institutional madness in the 70s has mellowed considerably, that’s just as natural a part of his process as showing up in the first place.

His philosophical-aesthetic approach has varied not a wit from his first launch into the void, the highly questionable and unforgettable Titicut Follies (1967): he takes his subjects on nakedly, straight on, without narrative, narration, talking heads or music, carefully cutting out any accidental acknowledgement of the camera’s presence in the room. Titicut Follies, with its appalling witness of mental-patient neglect and abuse, was an extreme that Wiseman learnt to steer clear of, and his ethos became ruled by a balance between social critique and everyday mundanities, seen in films from High School (1968), Hospital (1970), Basic Training (1971) and Juvenile Court (1973) to Racetrack (1985) and Public Housing (1997).

Of course, in the best of Wiseman the two ideas are one and the same, as in High School’s historically inconsequential but nevertheless electrifying bouts of heroic combat between pimply students and the well-meaning adults hellbent on draining them of ego. (Wiseman counterpointed this portrait 26 years later with 1994’s High School II, a portrait of a progressive Spanish Harlem school that is inspiring and, of course, less memorable.)

No other cinematic body of work has expressed with such detail the inadequacies of capitalist democracy to nurture and satisfy its citizens. That was then; as he has aged, Wiseman has been leaning towards less dramatic, more recreational-institutional arenas: Aspen ski tourism, the Miami zoo, the American Ballet Theatre, Madison Square Garden, the Paris Opera Ballet, UC Berkeley, Paris’s Crazy Horse strip club, and now London’s National Gallery. 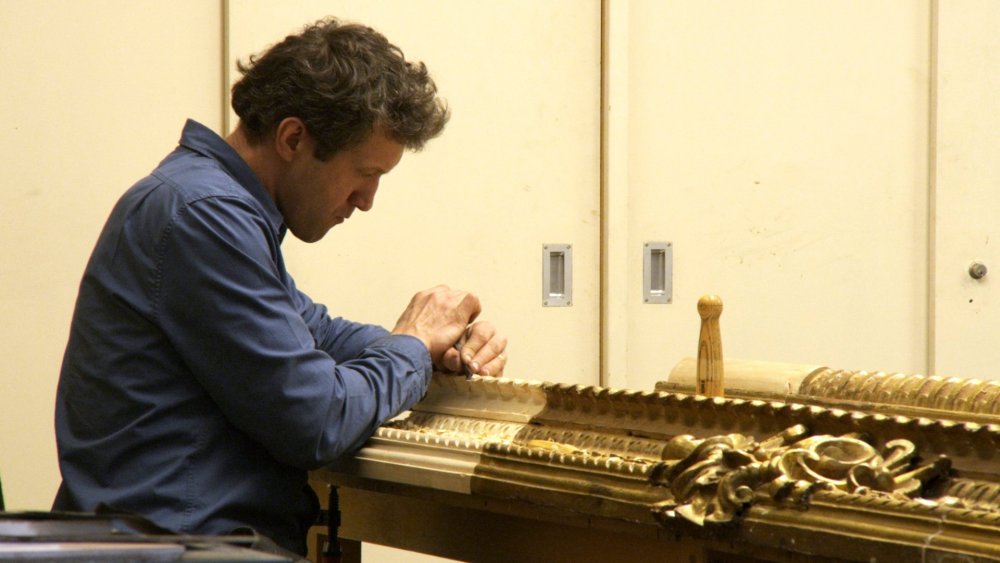 With Wiseman’s ostensibly hands-off approach – which feigns a capture-life-as-it-happens purity while silently assembling a subjective point of view, if not a thesis – this sometimes leaves open the question of purpose: why did Wiseman feel compelled to make a three-hour portrait of the National Gallery? We’re used to documentaries having a pedagogical or activist itinerary, but Wiseman’s have become fastidiously unpedantic – his simple Terence-like interest in what other human beings do and how they do it is more than enough. The result can be a disarming experience: sympathetically humane and fascinating, while at the same time seeming to have no greater significance than, say, the TV documentary that we see also being shot in the Gallery, interviewing many of the same curators and restorers that Wiseman at other times observes doing their thing while they ignore his camera rolling away nearby.

The film is a suitably pensive, three-hour day trip through the museum’s workings, from the front office’s meetings (relentlessly vetting the budget and the endless tension between drawing in patrons and maintaining a curatorial integrity) to the behind-the-scenes work of setting up exhibits, handcarving and gilding frames, cleaning and restoring and varnishing aged works, and so on.

Much of the film, however, is taken up with the museum’s various public programmes, on-the-floor lectures and presentations to all age groups (including a picture appreciation session for the blind), all of which are insightful and compelling vis-à-vis the classical artworks on hand, but only just so. The Gallery’s employees doggedly extol the virtues of their foundation to the museumgoer, but Wiseman’s position is, as always, ambiguous – if he has one, rather than simply an inquisitive stance towards the people as individuals on both sides of the educational divide (who remain glimpsed, unnamed and unexplored), and perhaps how the institution frames them, one to the other. (Jem Cohen’s Museum Hours, about Vienna’s Kunsthistorisches Museum, was a more pungent homage to hypnotic museum-ness.) Draw your own conclusions, or just bask in the art, and congratulate yourself for appreciating Turner and Leonardo without necessarily being told how and why. 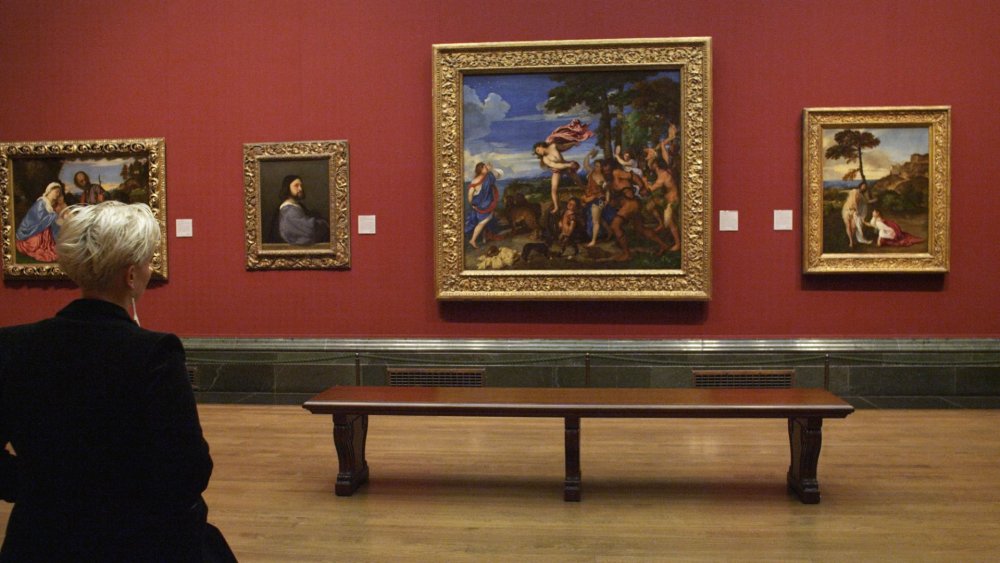 These swathes of the film are not at all unlike visiting the Gallery, or another huge museum, yourself; you don’t need Wiseman. The backstage time, however, is entrancing, in particular a curator’s detailed exegesis of the restoration process still being carried out on Rembrandt’s Portrait of Frederick Rihel on Horseback, and how a huge printed X-ray of the picture has revealed a completely different under-painting at right angles from the finished work, and ways in which the first painting shaped the finished product. In the meantime, Wiseman’s prowling camera is so unemphatically observational that you can be easily and profitably distracted by a background painting or a patch of gorgeous silk wallpaper or a particularly lovely museumgoer’s face.

It’s a relaxed afternoon of a film, and like Wiseman’s other late films, creates through its patience and duration a dawning awareness – of how our cultural lives are manufactured for us. Even if, as in this case, the sausage factory isn’t at all dismaying, the natural thrust is to recognise the bizarre gulf between the contrived, cultivated public enthralment we demand and the unglamorous, nitpicky and sometimes anxious work required to create it. Even the National Gallery is, to some degree, an artifice. This is not a fiercely new or profound realisation but it’s a valid dimension that the TV programme we see being shot in the same halls will surely omit. 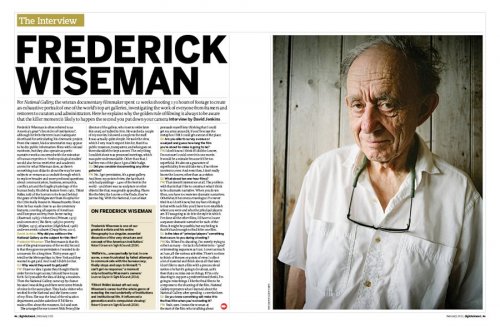 For National Gallery, the veteran documentary filmmaker spent 12 weeks shooting 170 hours of footage to create an exhaustive portrait of one of the world’s top art galleries, investigating the work of everyone from framers and restorers to curators and administrators. Here he explains why the golden rule of filming is always to be aware that the killer moment is likely to happen the second you put down your camera. By David Jenkins.

Related to Film of the week: National Gallery