Dropping out with Inherent Vice’s Paul Thomas Anderson, and the best of the awards season’s new American movies: Foxcatcher, Whiplash and A Most Violent Year. Plus Mike Nichols remembered, the low-down on modern masters Eric Rohmer and Chantal Akerman and the S&S Interview with Frederick Wiseman.

In print and digital from 2 January. 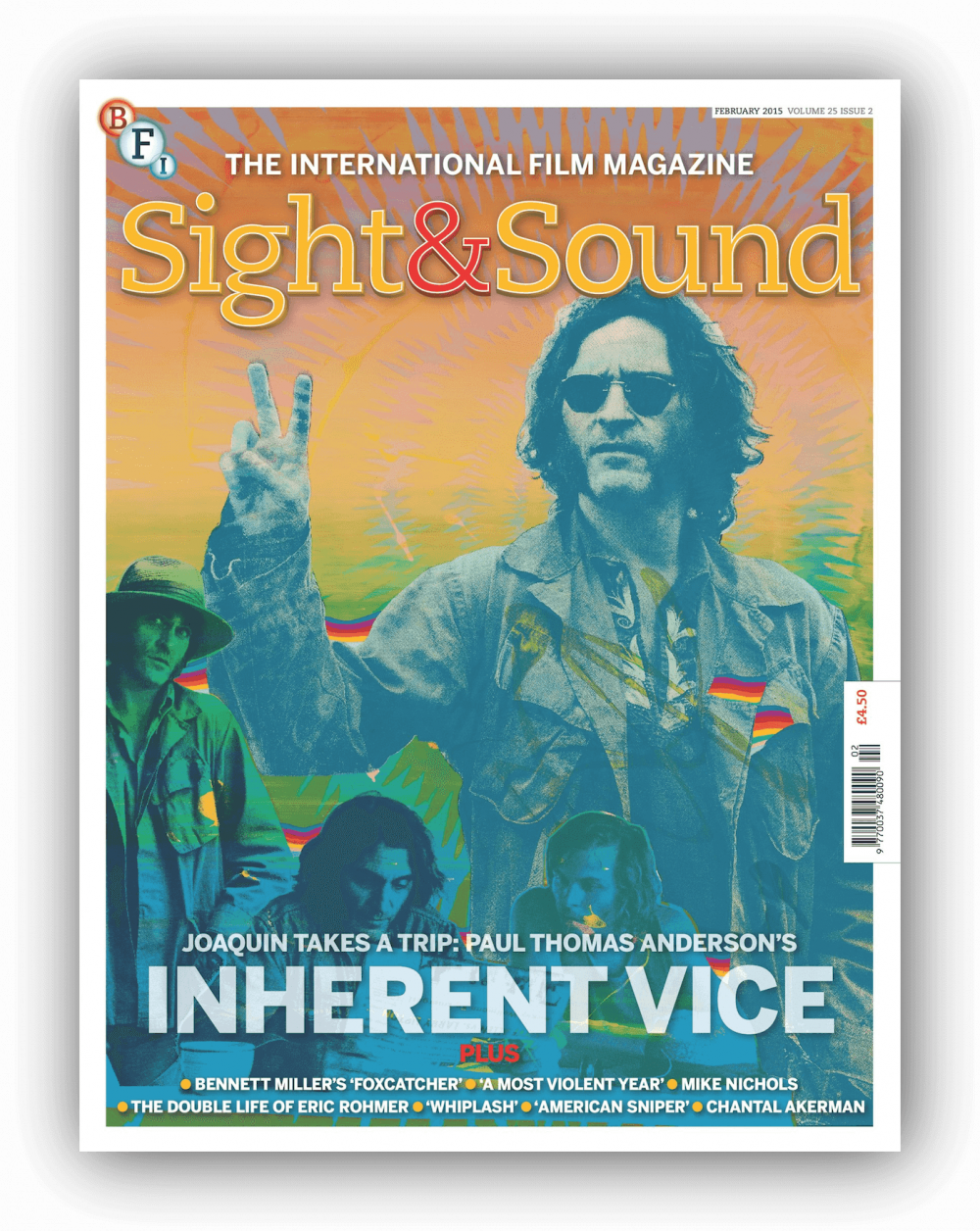 The latest from one of the most ambitious (his detractors say highfalutin) and formally inventive directors working today turns out to be an adaptation of Thomas Pynchon’s hippie-sleuth thriller Inherent Vice, set in a psychedelic 70s Los Angeles numbed and soured in the wake of the Manson killings. Joaquin Phoenix stars as a stoner private eye stumbling through numerous cases and getting entangled with the law after waking up next to a corpse in a massage parlour. Jonathan Romney tunes in to this rather un-Anderson “free-associative jam session, a succession of eccentric solos and spiky duets”, and talks to the filmmaker about, amongst other things, the influence of Neil Young, the talents of Pynchon, the appeal of 60s Playboy and why crane shots are a terrible waste of money, time and film.

A handful of other American filmmakers dominate our feature line-up this month:

They are joined by two emerging American voices:

Meanwhile, on the eve of a comprehensive Eric Rohmer retrospective at London’s BFI Southbank,  Geoff Andrew explores the life of the oldest leading light of the nouvelle vague, examining the remarkable and remarkably private man behind such classics as The Green Ray and My Night with Maud.

It was after watching Pierrot le fou (1965) by Rohmer’s New Wave compatriot Jean-Luc Godard that Chantal Akerman decided, aged 15, that her vocation was to be a filmmaker. Cristina Alvarez López and Adrian Martin pay tribute to the Belgium director’s restless experimentation with both fact and fiction, selecting highlights from her long career.

Paul Thomas Anderson’s Inherent Vice, a freewheeling adaptation of Thomas Pynchon’s picaresque novel, sees Joaquin Phoenix play a stoner detective against the backdrop of a Californian hippie culture soured in the wake of the Manson killings. By Jonathan Romney.

Slave to the rhythm

Whiplash is a film about the struggles of a young would-be jazz drummer that took Sundance, and then Cannes, by storm. Nick James takes five perspectives on the film  and, overleaf, talks to its fresh-faced director Damien Chazelle.

The double life of Eric Rohmer

The pseudonym adopted by the intensely private family man Maurice Henri Joseph Schérer was more than simply a name – it was a way to help him compartmentalise the very different sides of his life, an enigmatic duality he explored in semi-autobiographical fashion in his films. By Geoff Andrew.

Bennett Miller’s Foxcatcher, which tells the fateful true-life tale of a disturbed millionaire who takes over the training of a pair of down-on-their-luck Olympic wrestlers, is a troubling examination of the fiercely contested battlegrounds of class and male pride in America. By Sam Davies.

The director, who died in November aged 83, may not have made films with the distinctive personality of a true auteur, but he joins a formidable list of professional filmmakers alongside Vincente Minnelli and Stephen Frears who are celebrated precisely because of their versatility. By David Thomson.

J.C. Chandor’s follow-up to All Is Lost might fit the template of the generic gangster picture  in its tale of a Colombian ex-pat trying to make it in America, but there’s rather more  Gandhi and less Goodfellas than you might expect in a movie called A Most Violent Year. By Trevor Johnston.

For National Gallery, the veteran documentary filmmaker spent 12 weeks shooting 170 hours of footage to create an exhaustive portrait of one of the world’s top art galleries, investigating the work of everyone from framers and restorers to curators and administrators. He explains to David Jenkins why the golden rule of filming is always to be aware that the killer moment is likely to happen the second you put down your camera.

In the frame: Queens of comedy

Some of the funniest comics of the silent era were women –including some stars you might not think of as funny at all. By Lucy Porter.

As well as being sexually suggestive, the use of bananas in cinema taps in to a long history of racist imagery. By Hannah McGill.

As Whiplash hits UK cinemas, we go back to the classroom for five films focusing on the relationship between teachers and their charges. By Alice Butler.

For director Mariana Rondón, the story of a boy who wants straighter hair was a way of depicting the violence in Venezuelan society. By Mar Diestro-Dópido.

François Truffaut’s work as a critic helped fuel my love of film, so I decided it was time to dig out his first ever review and compare notes. By Mark Cousins.

Development tale: Into the Woods

It needed trimming, Disneyfication and changes in Hollywood fashion to get Sondheim’s sophisticated take on fairytales to the screen. By Charles Gant.

Brewster: If you build it…

If we want a thriving exhibition landscape in a generation’s time, we need investment to establish a younger, more diverse audience. By Ben Roberts.

With the London Film School’s move to a new site imminent, its director Jane Roscoe looks forward to a new chapter in its history. By Geoffrey Macnab.

IDFA: Life in the balance

Entries on the trauma of war and life on the margins of Russian society won awards, while a symposium assessed the status of women in film. By Nick Bradshaw.

Throughout her career, the director has pursued certain themes and ideas. Here, we offer a guide to some of the most important. By Cristina Álvarez López and Adrian Martin.

The transatlantic trade agreement known as TTIP could pose a threat to Europe’s long-cherished support of cultural pluralism. By Holly Aylett.

Soundings: The world is full of noise

Almost 60 years on, Louis and Bebe Barron’s ‘electronic tonalities’ remain among the strangest music ever created for a Hollywood film. By Geeta Dayal.

How digital technology led to the rediscovery of a missing film, more than a century old. By Oliver Gaycken.

American Sniper
Ex Machina
The Last of the Unjust

Annie
Beyond Clueless
Big Eyes
Big Hero 6
Exodus: Gods and Kings
Foxcatcher
The Gambler
Get Santa
The Hobbit: The Battle of the Five Armies
I Am Yours
Inherent Vice
Into the Woods
Kajaki: The True Story
La Maison de la radio
Montana
A Most Violent Year
National Gallery
Night at the Museum: Secret of the Tomb
Paddington
Paper Souls
Pelo malo
Penguins of Madagascar
Point and Shoot
The Pyramid
The Rendlesham UFO Incident
Rurouni Kenshin:  Kyoto Inferno
Selma
Son of a Gun
A Tale of Samurai Cooking:  A True Love Story
Testament of Youth
Trash
The Turning
Unbroken
We Still Kill the Old Way
Whiplash
Wild

When we dance: Les Blank – Always for Pleasure

Some say it was an apology for The Birth of a Nation. Far from it: Intolerance was D.W. Griffith’s  way of showing off. Reviewed by Pamela Hutchinson.

A mesmerising Beverly Michaels makes Russell Rouse’s tale of despair and desire much more than just another B-movie noir. Reviewed by Kim Morgan.

Boy Meets Girl
Come Back to the 5 & Dime
Jimmy Dean, Jimmy Dean
The Freshman
The Girl Who Knew Too Much
Jigsaw
The Killing Fields
Films by Mitchell Leisen and Preston Sturges
The Man Who Played God
The Hayao Miyazaki Collection
The Naked City
The Protagonists
Sidewalk Stories
Spione

Nice Work
Out of This World