Film of the week: Ex Machina

Androids – robots with human attributes – have featured in movies in a whole variety of guises, from the Evil Maria in Fritz Lang’s Metropolis (1927) through the hulking Gort in The Day the Earth Stood Still (1951), the loveable Robby the Robot in Forbidden Planet (1956), space-butler C-3PO in Star Wars (1977) and its sequels, the eponymous Terminator (1984), the cyborg RoboCop (1987), the mutant Iron Man in Tetsuo (1989), wistful young orphan David in A.I. Artificial Intelligence (2001), the terminally depressive Marvin in The Hitchhiker’s Guide to the Galaxy (2005) and Frank Langella’s larcenous pal in Robot & Frank (2012) – and we could toss Frankenstein (1931 etc), Blade Runner (1982) and plenty more into the mix. In all of these, the humour, drama or menace derives from the perceived lacunae between human and android behaviour: they may look like us, but to what extent do they think like we do? And what does it say about us that we’ve created them?

Ex Machina takes this well-used theme and rejuvenates it by crossing it with another quasi-scientific cinematic legacy: the various screen adaptations of H.G. Wells’s 1896 novel The Island of Doctor Moreau – first and most effectively filmed as Island of Lost Souls (1932) with Charles Laughton. Ex Machina’s Nathan (Oscar Isaac), creator and manipulator of androids, is the conceptual descendant of Moreau – an arrogant, control-freak alpha male ruling over his isolated realm, who exploits those around him and experiments on his creatures with no regard for their feelings until finally they turn against him.

Both these strands feed neatly into current paranoid concerns about the potential scope of AI, as expressed in Stephen Hawking’s recent warning that computers could soon start to redesign themselves at a rate far outstripping that of human evolution, and that “the development of full artificial intelligence could spell the end of the human race”. Nothing so new here, of course: back in 1920 Karel Čapek examined the possibility of hyper-intelligent machines rising up against their makers in his play R.U.R (which gave us the word ‘robot’), and some 60 years ago the SF writer Fredric Brown wrote his 250-word tour de force ‘Answer’, in which the ultimate supercomputer, a “cybernetics machine that would combine all the knowledge of all the galaxies”, is ceremonially switched on and asked: “Is there a God?” From a clear blue sky a bolt of lightning strikes down the machine’s maker and fuses the switch at ‘ON’ as the answer comes: “Yes, now there is a God.”

But with AI seemingly on the verge of equalling, if not surpassing, human capacity in many functions, and with Morten Tyldum’s recently released The Imitation Game foregrounding Alan Turing and his famous test (intended to probe whether a computer can ‘think’, or at least convincingly appear to think) in audiences’ consciousness, Ex Machina is nothing if not timely. The directorial debut of novelist-turned-screenwriter Alex Garland, author of The Beach and the screenplays for 28 Days Later… (2002), Sunshine (2007) and Never Let Me Go (2010), the film is a tightly choreographed four-hander. To Nathan’s Alaskan hideaway (the breathtaking landscape of Norway’s Valldal standing in for Alaska) comes young Caleb Smith (Domhnall Gleeson), a coder at Nathan’s search-engine company, who learns that he’s tasked with carrying out a Turing test on Nathan’s latest creation, Ava (Alicia Vikander). The only other resident is Kyoko (Sonoya Mizuno), Nathan’s assistant and bed companion, who never speaks and, Nathan tells Caleb, doesn’t understand English. 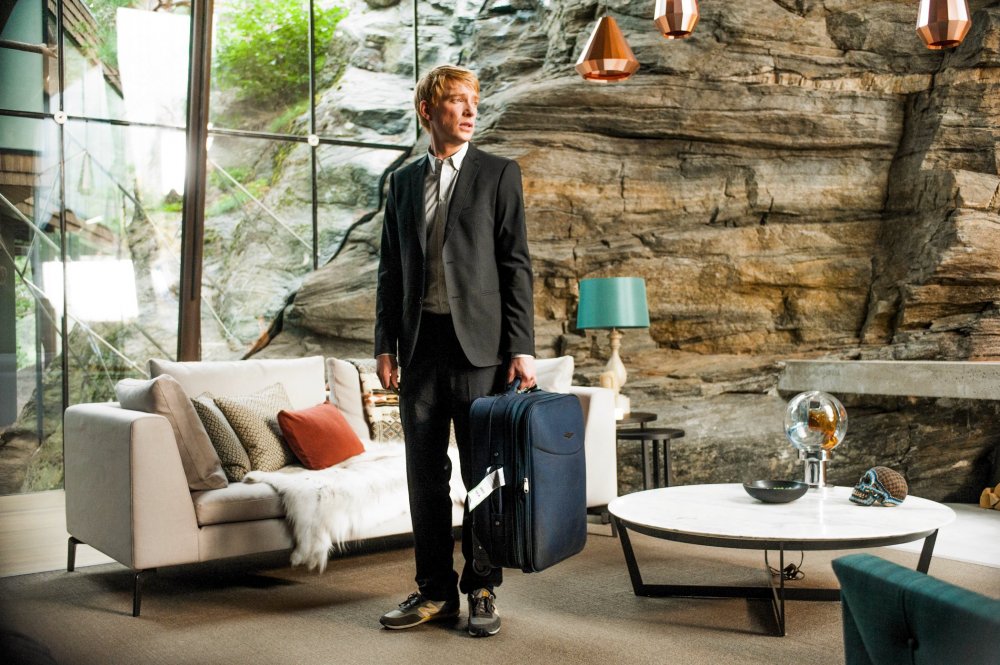 Even before entering the house – an edifice of cool organic modernism, all grey-stained wood-slats and floor-to-ceiling glass walls, built around rocks that intrude into the fabric – Caleb is wrong-footed. Trying to find a bell, he presses a button and a bright light flashes in his face. He’s been photographed, and his absurd grimace of shock is captured on his key-card – which, as he’s soon told, is a second-class laissez-passer, allowing him entrance only to certain rooms. His first sight of Nathan – and ours – shows what’s coming: stripped to the waist, Nathan is pummelling a punch bag, a role to which (in psychological terms) the younger man will now be assigned. Claiming, as of right, insight into Caleb’s thoughts and feelings – “I get the moment you’re having” – Nathan patronises him under a cursory facade of macho bonhomie.

The architecture of Nathan’s residence (“This isn’t a house – it’s a research facility,” he tells Caleb) likewise enhances the plot and simultaneously foreshadows its denouement. Caleb’s daily encounters with Ava take place in a glassed-in complex with a view on to a small, inaccessible garden; but paradoxically it’s Caleb who’s the more confined of the two, held in a small glass box within the space, while Ava is free to move around him. DP Rob Hardy works resourceful changes on this open-yet-closed environment, letting his camera roam around the dual captivity, modifying the lighting to foreground or disperse the characters’ reflections, playing on their tantalising situation, at once close to each other and separated. 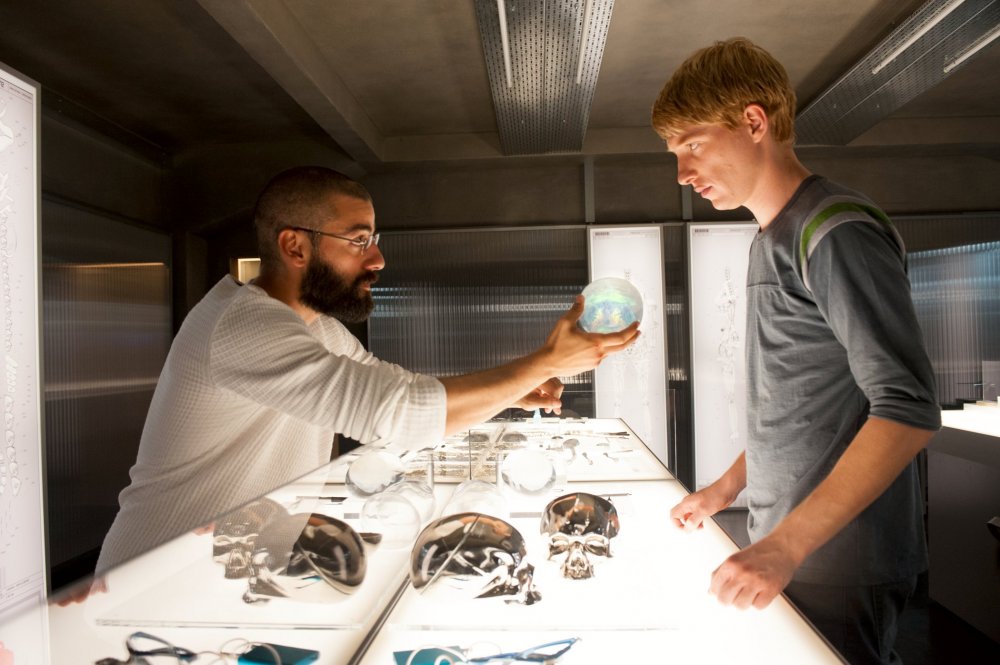 With his lanky, fresh-faced good looks, Gleeson is spot-on casting for Caleb, highly intelligent but none too clever, latching on too late to the way he’s been played from more directions than one. For, as Nathan reminds him, “consciousness cannot exist without intention”, and Ava has her agenda no less than her creator. Manipulated from both sides, his emotions tugged one way and his mind the other, Caleb becomes so discombobulated that at one point he slices into his own arm with a razor blade, fearing that he too may be an android without knowing it. This sense of uncertainty, of boundaries being elided, is enhanced by Geoff Barrow and Ben Salisbury’s shimmering, glissading score, slithering liquidly around quarter-tones to heighten the tension while never falling into electronic cliché.

Last year in Spike Jonze’s Her, a lonely writer (Joaquin Phoenix) fell in love with ‘Samantha’, his computer’s operating system (seductively voiced by Scarlett Johansson), only to be devastated when she confessed to multiple ‘infidelities’ and abandoned him to seek out ‘higher forms of consciousness’ than the merely human. Garland’s sharp, shrewdly paced film takes the next logical step, making Ava a physical presence and visiting an even crueller fate on her gullible admirer. (As in Never Let Me Go, Garland’s sympathies are ultimately with the android.) The final scene, with Ava in her newly acquired human carapace mingling undetectably with crowds on a city street, invites us to wonder: how many other ‘higher forms’ might soon be walking among us – and what happens if, or when, they all gang up?

Related to Film of the week: Ex Machina