Review: The Hobbit: The Battle of the Five Armies

After nearly eight hours of screen time, greed and goblins finally succumb to a coalition of the quasi-robotic good in the final chapter of Peter Jackson’s big-ticket 3D CG CinemaScopic paean to homespun virtues. Our late-to-the-carnage reviewer remains nonplussed.

To steal a line the late Gilbert Adair used more than once, I have to declare a lack of interest. Peter Jackson’s JRR Tolkien adaptations are held to have been somewhere close to the centre of popular culture for 13 years now yet I have somehow managed to avoid them. Bits and bobs – people saying “precious” in a funny voice, for example – get through but their meaning and import are a mystery to me. Not having seen the earlier instalments of this saga – three Lord of the Rings films and the first two entries in the three-part adaptation of The Hobbit – is a disadvantage. But one might ask how many of the place and character names ordinary viewers of last year’s The Desolation of Smaug will be able to recall.

At any rate, we begin in media res, with a giant dragon – Smaug himself – napalming a small island until he takes an arrow to the chest. The division of Smaug’s assets, kept in a mountain fortress, is in dispute. Bard (Luke Evans), the archer, has a case; but so do Thorin (Richard Armitage) and his band of dwarves, joined by the titular hobbit Bilbo Baggins (Martin Freeman, only nominally the lead), who have occupied the mountain. The elves also want a piece, and while they and the islanders are able to come to terms, Thorin holds out, and is still holding out when the awful orcs arrive to kill everyone. By my count that makes four armies, two (later three) of them acting in concert, but what follows is indisputably a battle.

Or slightly disputably: I am unsure whether the footsoldiers in the anti-orc alliance are meant to be automata but they certainly act like automata, making it largely a struggle of quasi-robots against monsters, at once extremely violent, almost bloodless, this being a family film, and uninvolving. 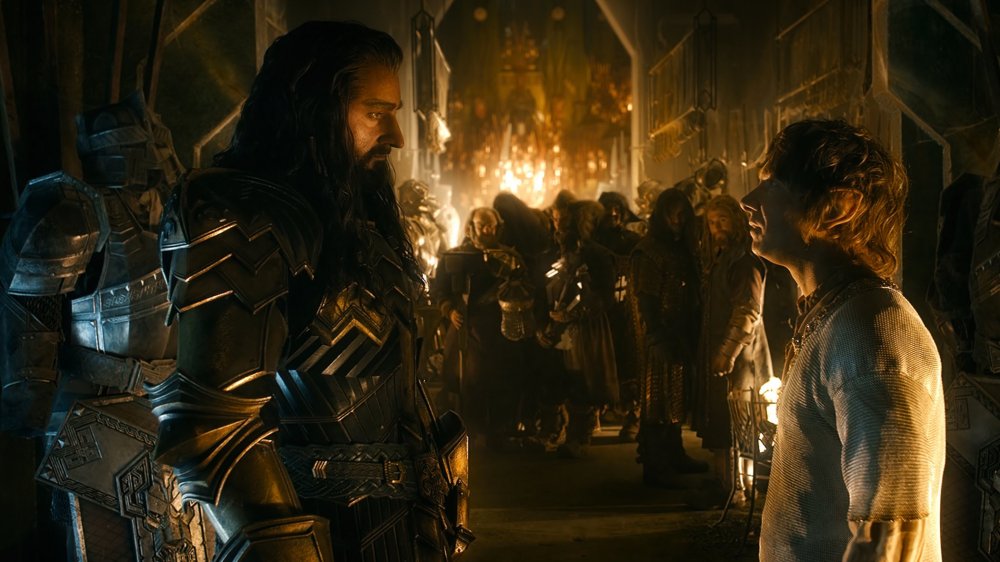 Though the main event is, as Edmund Wilson put it, “the drama of life as a showdown between Good People and Goblins”, there are questions of emphasis among the non-orcs, which are eventually resolved in favour of loyalty and love of peace and homeland, etc. – embodied in Bilbo – over greed, especially for gold.

This extolling of simple völkisch virtues, not exactly free from unpleasant resonances, is queried only once, probably not intentionally, when Bilbo returns home. A simple match-cut from Martin Freeman to Ian Holm, sitting in the same chair, more moving than anything else in the film, covers his whole life between the trilogies (as it were), and conveys a rather different sense: that he enjoyed his adventure more than the simple life that followed it.

Wilson’s other charge, that the books lacked “concrete reality”, applies in ways he could not have predicted to the film. The effect of 3D is to separate characters from backgrounds, as in bad back projection, shattering the obsessively wrought illusion. More importantly, it is a ludicrously naff thing to behold, and entirely without wit. The only funny line must be unintentional: it comes when two women are seen in the same shot, possibly for the only time. What do they say? “I say we stand with our men in death – as in life.”

Related to Review: The Hobbit: The Battle of the Five Armies