Avengers divide! Instalment 13 in the Marvel Cinematic Universe, and as a wedge is driven between them, our superheroes discover their common emotional vulnerability. Now read on…

from our forthcoming July 2016 issue

The Marvel Cinema Universe™ juggernaut rolls on in this 147-minute playground game of Who Would Win in a Fight Between…? The story parallels Batman v Superman Dawn of Justice, from the rival Warners/DC stable of superheroes. Again, a villain reasons he can’t beat the superheroes he hates but that they can beat each other and pulls strings (some very clever) to arrange what boils down to Iron Man v Captain America.

Marvel have established these takes on their flagship (indeed, flag-draped) characters in earlier Iron Man, Captain America and Avengers movies. Chris Evans and Robert Downey Jr now inhabit their roles so well there’s little need to rehash too much backstory (William Hurt’s Thaddeus Ross, unseen since The Incredible Hulk, hosts a highlights reel of super-scuffle carnage) before getting down to business.

In theory, DC has an edge over Marvel in that their big heroes crossed over into mass popular culture in the 1940s and are recognisable to audiences who can’t distinguish Cap’s armoured black ally (Anthony Mackie as the Falcon) from Iron Man’s armoured black ally (Don Cheadle as War Machine) or the colour-coded hot fighting chick on Steve Rogers’ side (Elizabeth Olsen as Scarlet Witch) from the colour-coded hot fighting chick on Tony Stark’s side (Scarlett Johansson as Black Widow).

It’s not much of an achievement that co-directors Anthony and Joe Russo (held over from Captain America the Winter Soldier) make a better film than Zack Snyder… but it’s worth noting that Marvel (corporation as auteur) have nurtured their characters (even in weaker films like Iron Man 2) to the point when they carry more screen weight than lasting icons Batman and Superman. However, repetition sets in and the escalation of set pieces reaches some sort of a peak here: there are good-to-great action, chase and fight scenes (Bryan Singer’s X-Men films still have an edge on depicting superpowers) but there’s also a limit to the number of times people can be kicked through walls before the scraps start to feel samey. 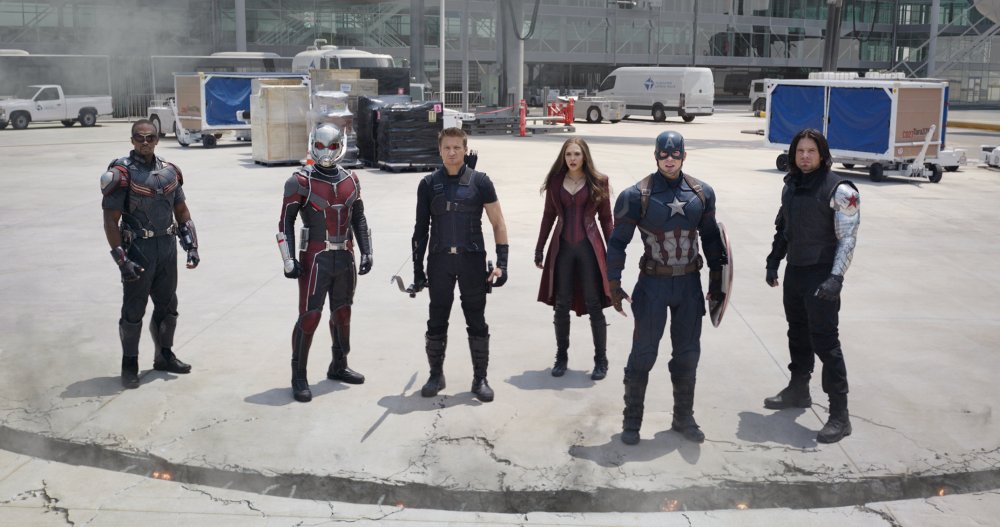 There are two big choreographed face-offs: a mid-film battle on a German airport runway with 12 differently-aligned combatants, and a climactic, more intimate (and genuinely painful) struggle which is more about character than gimmicks.

Comics writer Mark Millar’s Civil War storyline is only lightly referenced by screenwriters Christopher Markus and Stephen McFeely. Millar’s US Superpowers Registration Act is dropped in favour of the United Nations’ ‘Sokovia Accords’ that the real-life US (which doesn’t recognise the International Court of Justice, for instance) would never sign. Rather than debate individual responsibility, gun control, American domestic and foreign policy and civil disobedience (as Millar did), it all comes down to Cap doing everything he can to help his incredibly guilty-seeming best friend.

Building a plot around this issue means there’s an odd absence from this particular Captain America movie. Millar’s story is all about America, but this isn’t – most of it takes place outside the United States. The idea – inherent in the very concept of Captain America – that superheroes represent an American solution to problems that the rest of the world would find hard to live with is downplayed.

Timeouts allow for updates on simmering sub-plots like the developing relationship between Vision and Scarlet Witch (Paul Bettany and Elizabeth Olsen get more to do than in Avengers Age of Ultron) and the literally expanding powers of Ant-Man (Paul Rudd, a bit subdued). Other characters are brought on and primed for spin-offs: Tom Holland’s Spider-Man, the second big-screen reboot of Spidey this century, impresses in a chattery cameo; Chadwick Boseman’s Black Panther (a black character who isn’t primarily someone’s second best friend) is fluid in action and stiff out of costume in a potentially interesting way.

A persistent MCU problem is a lack of first-rank villains. Crossbones (Frank Grillo), one of the franchise’s few double-dyed bastards, gets an early look-in but is benched in favour of Zemo (Daniel Brühl) – who’s a typical MCU baddie in that he’s more grounded than his comic-book equivalent but considerably less interesting.

Civil War picks up on the greyish, drab-paranoid feel of Winter Soldier – there’s a lot of concrete, and even the colourful costumes are muted. It’s not as gloomy as DC’s recent efforts (few films are) and judicious doses of wit and charm relieve the angst and the smashing: Iron Man addresses Winter Soldier with “Hey, Manchurian Candidate”, Spider-Man irritates senior heroes with “Remember that really old film The Empire Strikes Back?” and Ant-Man poses as the voice of Tony’s conscience (“You don’t hear from me very often”). Next up, Dr Strange…