Archives online: Margaret Tait’s rooms of her own

Available to watch at the National Library of Scotland’s Moving Image Archive: 48 incandescent, unimpeded emblems of a cinema “what’s welling up in people to make”. Thirza Wakefield explores the prolific homespun filmmaking of the woman who said ‘no’ to John Grierson.

Established in 1976 and integrated into the National Library of Scotland’s Collections Department in 2007, the Scottish Screen Archive, as it was recently known, unveiled its new name this month. Containing over 1,700 full-length films and clips, the online catalogue of the now-called National Library of Scotland Moving Image Archive comprises newsreel, public information films, magazine films, educational dramatisations, documentaries and home video.

If all this is more or less to be expected of a national film archive, what distinguishes it is its commitment to chronicling the country’s rich film culture, and in particular the insight it offers into Scotland’s amateur film-production and -exhibition scene. The text accompanying this portion of the archive – best perused by ‘Biography’ – makes for beguiling reading, and is the result of the combined efforts of archive staff and students on placement from the History Department of Strathclyde University. Records range from the activities of lanternists (William Walker), film renters (‘Prince’ Bendon), projectionists (‘Joe’ Gray), showmen (Glasgow’s Green family) and cine societies (Edinburgh, Glasgow School of Art, Dawn).

Enrico Cocozza numbers among the amateur directors documented here: a by-turns surrealist and social realist filmmaker who also ran the Connoisseur Film Circle in the back of his parents’ North Lanarkshire café.

An excerpt of his screwball short Scherzo (1956) is free to view online, along with his ‘fiction-documentary’ Chick’s Day (1949/50), featuring nonprofessional actors local to where he lived. As the teen protagonist of this second film slumps against his own backdoor, bruised after a beating, the boy’s voice on the soundtrack – assumed to have been added later – delivers a bitter soliloquy in the West Central dialect. “I cursed the hell-rotten dump where I’d been dragged up; I cursed myself,” he moans, “poor, miserable bastard that I was; I cursed; I cursed; I cursed!”, as the camera pans up and over the roof of his mother’s house, showing beyond it more tiled roofs and the wind-lashed washing lines of a Wishaw neighbourhood. Cruciform telegraph poles put the finishing touches to this Golgotha. 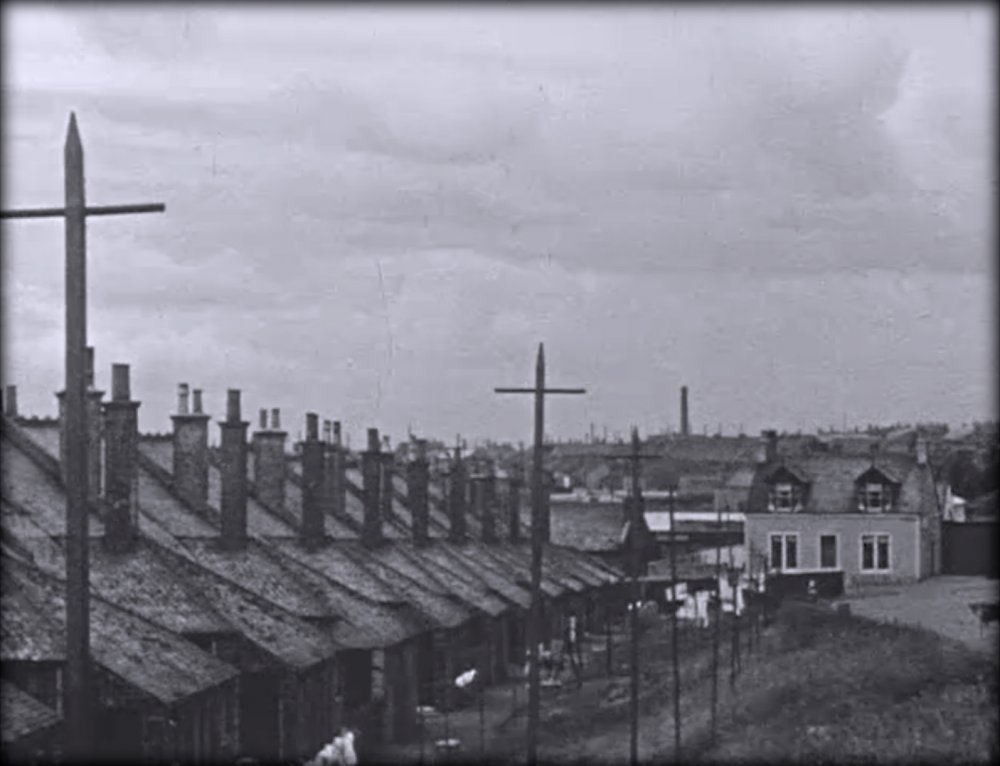 One filmmaker, in particular, stands proud of the group, with a towering 48 titles listed in the archive, and that’s Margaret Tait. This month’s film, These Walls (1974), is among the 28 of her works (or parts thereof) accessible online, and is another – like Cocozza’s – to show us chimneystacks silhouetted against the sky.

Tait’s film, however, hasn’t the doomsday overtones of Cocozza’s. Actually, it’s full of affection: a six-minute silent film taken of the interior of her first-floor studio on Edinburgh’s Rose Street. Number 91 was home to Tait’s production company Ancona Films, and had served as a base for Tait for around 20 years when These Walls was shot. What occasioned the film, it’s thought, was her vacating the property, perhaps forced out by the same redevelopment she films in progress across the street. As such, it’s a leave-taking tour of sorts, and yet has none of the sorrow or sense of loss one might expect of a parting ways. The clue is in the name, the film’s defiantly deictic title – these walls – stationing the filmmaker steadfastly within them, and if the film is an inventory, it is one she at least half-consciously conducted every working day she spent there. 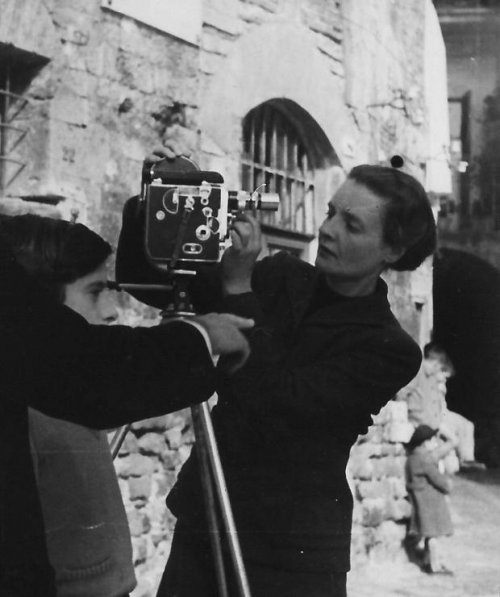 Tait was an independent filmmaker, and one – as acknowledged in the most recent issue of Sight & Sound – often overlooked. Where Tait’s contemporary Jenny Gilbertson – a Glasgow-born filmmaker and poet whose work is also collected here – sought the imprimatur of esteemed documentary-maker John Grierson and welcomed his shaping her career, Tait went her own way, refusing Grierson’s help when it was offered. Skeptical of the prescriptive commissions provided to filmmakers like herself by the second, post-war iteration of the Films of Scotland Committee, of which Grierson was a prominent member, she maintained, writing in the year before her death, that a “‘Scottish Cinema’ can only come of what’s welling up in people to make.”

This fostering of filmmaking talent by the Films of Scotland Committee turned out fine filmmakers of the likes of Bill Forsyth, whom Tait admired, but it was all in all, in own her choice words, ‘awful’. By working intermittently as a locum doctor – Tait was trained in medicine – she self-financed all but three of her films, all of them shorts bar a single feature, Blue Black Permanent (1992), which she began shooting aged 74. The cost of Tait’s closing the door on opportunities that improved the prospects of others of her generation was to consign herself to relative obscurity. The price of autonomy is anonymity, and Tait is still paying today.

Her going it alone – Tait’s independence – is what’s behind These Walls. The appointments of this private place, the yellow flowers on drawing paper, the film cans on the workbench, the satirical cartoon (“One detects a little sentimentality creeping into his recent work”), the black-and-white and sepia photographs stuck edge-to-edge on the wall – these were her standing committee. They looked back as much as were looked at, both witness to her working process and part of it. Tait’s free-ranging camera reenacts the act of looking, while her pausing – as at the glaucous concrete sill of the stairwell window – feels demonstrative of the firming up of an idea. Each frame of the film tells of a frame of mind that overtook her as she worked at cutting together 16mm film, for example, or applying bright, biomorphic shapes onto emulsion to create her experimental, hand-painted animations. 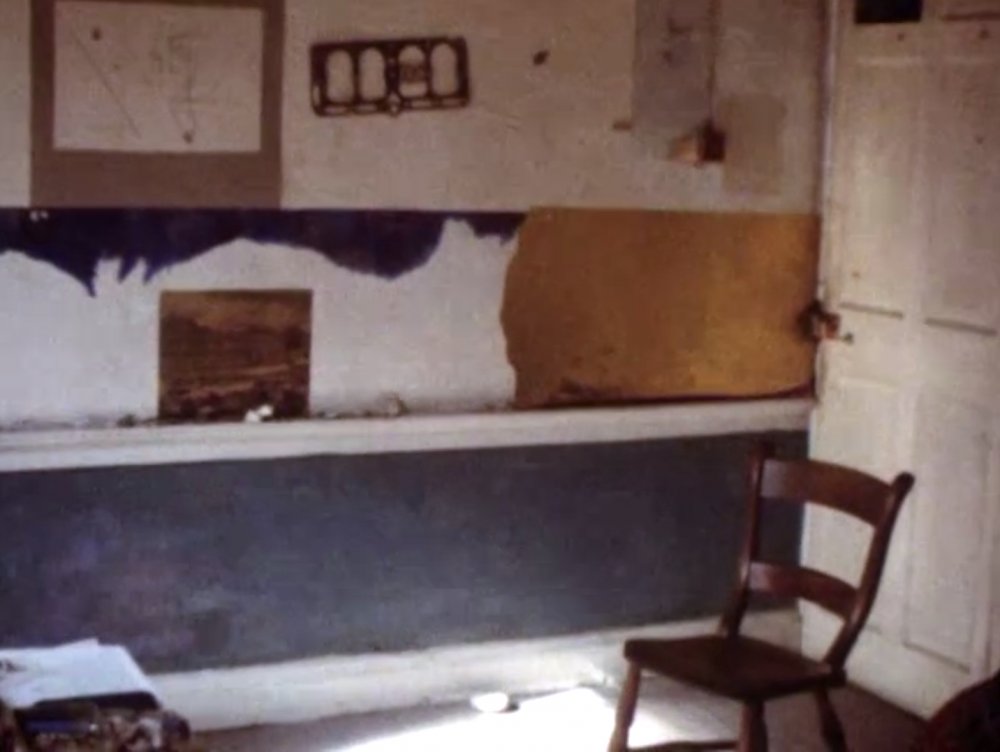 Owing to its slowness, the film takes on the appearance of a still life – albeit of a fluid composition – with the coarse-textured paintwork of the walls cementing this impression. Tait tests different frames: panning along the dado rail at 3m 47s, she swaps a blue border to the right of frame for a lick of red on the left.

These Walls isn’t the only film of Tait’s to treat of interiors (viz My Room. Via Ancona 21 (1951), or Where I Am Is Here (1964)), nor is she the only woman with a movie camera to marry the interior of a working environment with the interior workings of the creative mind. The latest documentary from director Barbara Hammer, for instance – Welcome to This House (2015) – explores the artistic practice of the poet Elizabeth Bishop by way of the houses she inhabited. This approach to gaining access to the character of Bishop’s work took its inspiration from Hammer’s experience as filmmaker: “The architectural structures in which I live and work influence the art I make.”

Tait’s Place of Work (1976) and its rumoured coda Tailpiece (1976) similarly survey her immediate surrounds, taking stock of the fixtures of her Orkney home. These “self-made films”, as she called them, share a preoccupation with passageways: doors giving onto other doors, the archway in her garden, the foot of her stairs leading up, elsewhere. The corridors or clearings she films inside the house are invariably striped with natural light filtering in from a nearby window. This recurring image and the pervasive stillness of all three of the aforementioned films seem expressive of a state of mind auspicious to invention: “incandescent, unimpeded”, as Virginia Woolf wrote in A Room of One’s Own. 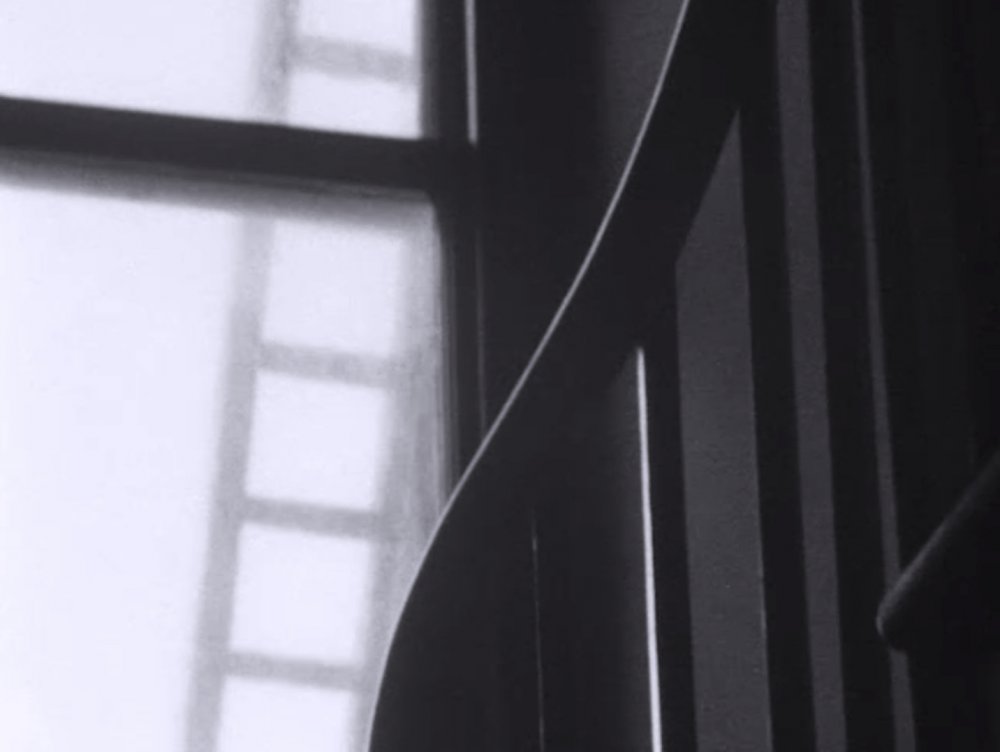 These ways-through or apertures that Tait was fond of filming take on a symbolic significance when one remembers that she forged her own entry into the filmmaking trade. Only in her element – these rooms of her own, equipped exactly as she wished them to be – did she stand a chance of producing that Scottish cinema welling up in her to make.

But making films was one thing, showing them another. In life, Tait struggled for an outlet, an exhibition space where she could screen her films to the people she “would like to like [them]”, as she wrote: “direct people, genuine people”. So much so that, in 1954, Tait was compelled to throw a free film festival at the Rose Street studio, which was attended, mostly and to her satisfaction, by curious passersby.

The National Library of Scotland Moving Image Archive makes a strong case for making public, in one place, the works of minority or marginalised filmmakers. It has furnished Tait, posthumously, with just such a space as she wanted, a platform whereon those that care for them can watch her films for free, and where they are at home, altogether.

The filmmaker and poet Margaret Tait was an uncompromising, singular talent and her work deserves to be more widely seen. By Nick Roddick.

☞ Buy Poems, Stories and Writings by Margaret Tait, edited by Sarah Neely with a foreword by Ali Smith at BFI Shop

Related to Archives online: Margaret Tait’s rooms of her own