Lang may yer lum reek: Glasgow at the movies

A new exhibition celebrates the city’s history of gallus film-going. 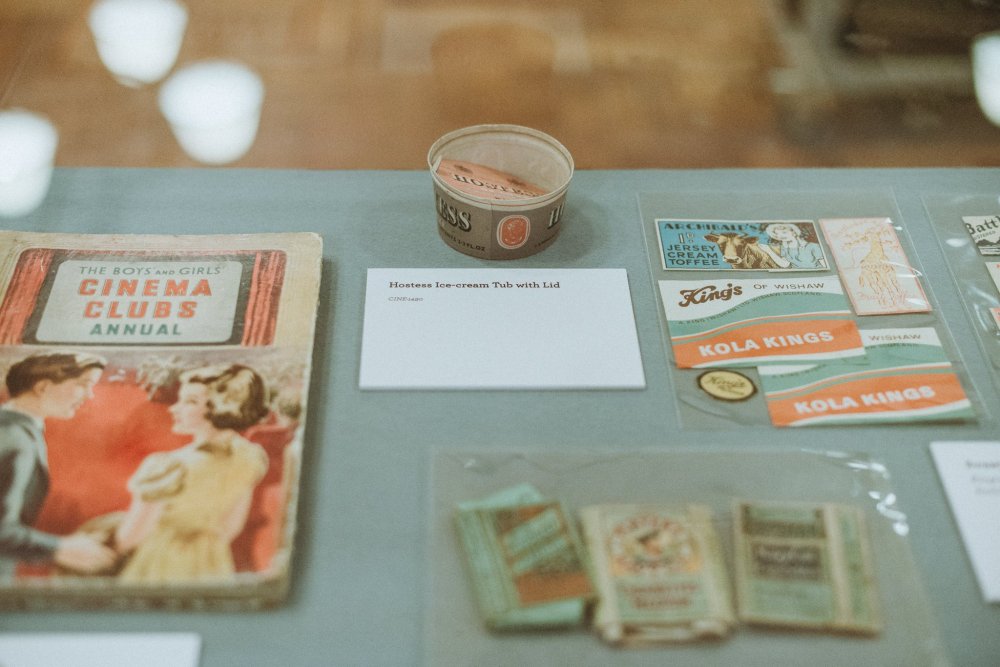 Cinema-going in Glasgow has hit the headlines in recent weeks. According to the Mirror, a rowdy Valentine Day’s screening of Fifty Shades of Grey culminated in vomiting in the aisles and a man being glassed by a group of women (the glassing aspect of the story was later refuted by police officers). The fact that this story made the national newspapers is perhaps because it plays seamlessly into Glasgow’s characterisation as a boozy, uncontainable, dangerous place, where even a Valentine’s date night at the pictures can end with blood on the seats.

In 1939 Glasgow housed 114 cinemas and had more cinema seats per head of population than any other city in the world. Listening to the accounts presented in the exhibition, the reason for this seems to rest on the combination of poor living conditions and the cheapness and accessibility of cinemas that also provided a dose of glamour and a place to dream (“the pictures was always the pictures … you went there to escape from a humdrum life”). 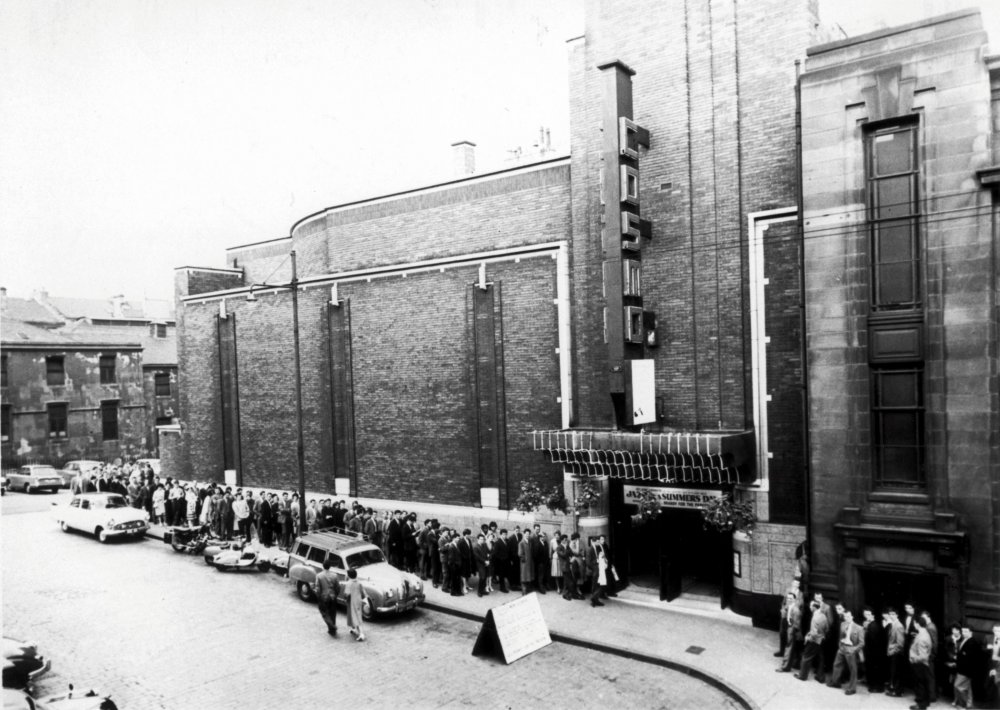 Tenement housing in pre- and post-war Glasgow was notoriously bad and overcrowding was rife. This context is not over-explained in the exhibition texts, but emerges through the accounts of the interviewees. One woman interviewed recalls how the children in her family had to take it in turns to go to the cinema or to the dancing to give privacy to the others. Another recalls how during the war shipyard workers would go to the cinemas for a sleep because this was much more comfortable than where they lived. She goes on to portray cinemas as beacons in a grey wartime city: “It was very foggy in Glasgow and you could hardly see your finger in front of you… but when you came to the cinema you seen the light, so that guided you. You knew you were alright, it was a kind of landmark for you.”

Cinemas were also cheap. The ‘jeely jars’ of the title refers to empty jam jars that could be returned to the supermarket for a ha’penny. If you took two to the cinema you could exchange them for entry. Perhaps it was the affordability that made the cinema feel like an extension of the home. One woman refers to going there as like being in ‘the close’, the communal staircase and landing within tenement flats. The close is shared and public but also homely.

But despite this homeliness cinemas were also places of glamour. Interviewees recall the plush carpets, the purple uniforms and epaulettes of the ushers, the grandeur of the buildings. And once you were in, they were places to dream. “It took you away from your tenement outlook: in your wee room and kitchen… it showed you the big houses in America and all the big cars and you’d say, ‘that’s marvellous’.” 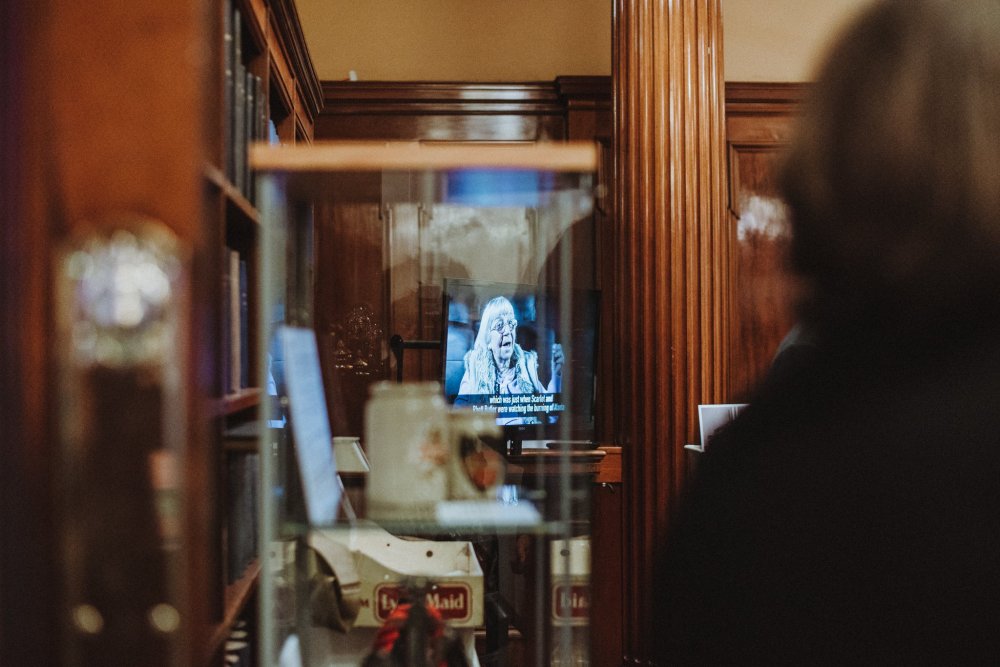 This experience of glamour, however, sometimes came with a dose of reality. One interviewee recalls a dinner-suited manager spraying disinfectant around the auditorium during the show.

There were also attempts made to use the cinema to civilise Glasgow’s children. The highly engaging John and Peter Douglas, identical-twin projectionists who worked in Glasgow cinemas for 44 years, recall the “community singing” that took place before the children’s Saturday morning show. Hated by the children, the singing culminated in a ‘club song’ about being a good citizen – performed in the exhibition word for word by the projectionists. The twins and other cinema workers give us the story from the other side of the box-office window, from the horror of having to climb up to manually operate a jammed cinema curtain in a packed house on a Saturday night to recollections of some of the lost materialities and rituals of cinema work, the cutting of massive reels of film, the ticket machines. These physical objects are also present in cases within the exhibition.

Cinema-goers’ memories are replete with emotion. These range from wistful stories of alternative lives (“I always thought it would be great to be a cowboy”), recollections of emotional upset, the woman in her 80s recalling her distress at watching Heidi because of its depiction of separation from a loved one, to the recollection of romance, one woman recalling the thrill of a first date and her boyfriend spending his ration vouchers on a gift of chocolates (“Parisian creams! I can still taste them”). 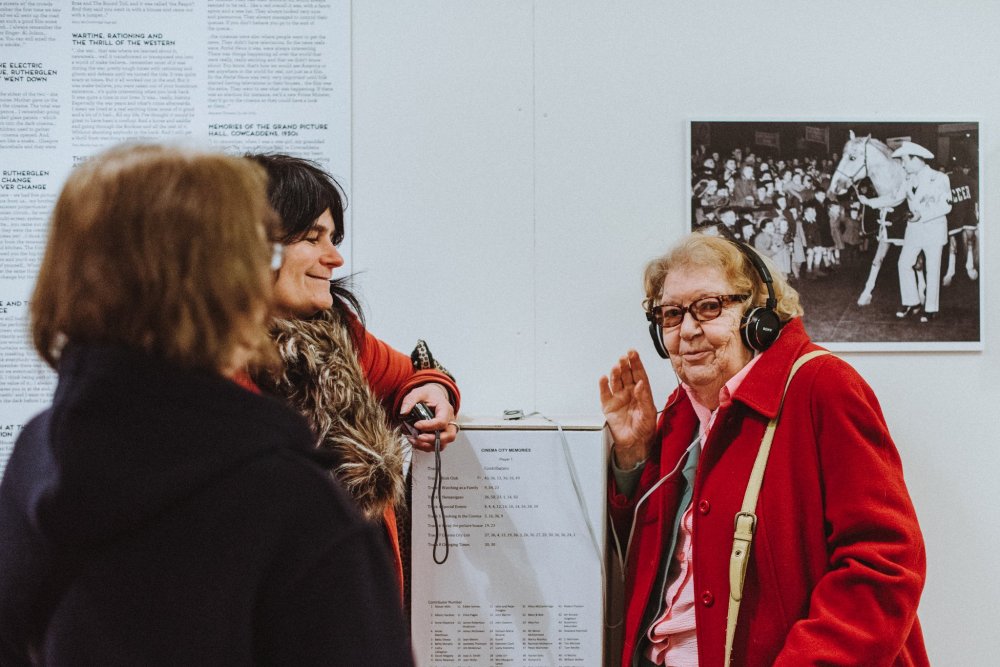 A visitor to the launch of Jeely Jars and Seeing Stars: Glasgow’s Love Affair with the Movies
Credit: Ingrid Mur

This emotional response isn’t merely presented but also conjured by the exhibition. On a Tuesday afternoon the exhibition was very busy with people laughing in recognition at the accounts on film and audio, and reminiscing about their own experiences. There’s also a memory board within the exhibition where people are encouraged to contribute their own tales of cinema-going.

The story of the rise of the cinema in Glasgow is told chronologically on boards (although the audio is presented thematically instead on mp3 players dispersed throughout the exhibition), but stops at its heyday. The audio clips on the other hand extend beyond this time period, as of course do exhibition visitors’ own reflections. This raises questions about cinema decline and demolition. What happened next to cinema-going in Glasgow?

What the exhibition does is to demonstrate the poignancy of cinema as an encounter with the extraordinary in everyday life. This experience is not exclusive to the over-60s. Kashif, aged 39 recalls:

“The creaky old curtain pulling back, the crackle and pop of the projector being cranked up, people smoking… A very emotional and very physical presence before the film even started… you were going to be taken on a journey, take far, far away. You would forget to breathe.”