John Beagles hears voices from the past around every darkened corner at the Glasgow International Art Festival. 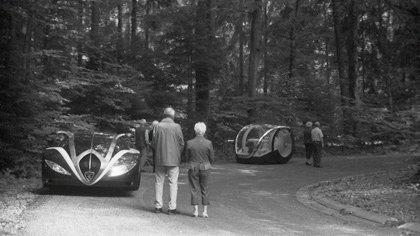 David Maljkovic’s Out of Projection (2009)

The spectral presence of moving images and sound ghosted this year’s Glasgow International Art Festival (GI). The curators’ thematic hook of past, present and future (a popularised take on hauntology) is specifically explored in installations by Gerald Byrne and David Maljkovic, while even in those shows where the moving image is absent, the cinematic imagination looms large (most obviously in Christoph Buchel’s spectacular immersive ‘film’ set, ‘Last Man Out Turn Off Lights’, at the Tramway gallery). As a whole, the festival provides an engrossing, partial representation of the art world’s complex engagement with – and attempts to create an alternative to – the habitual, mainstream protocols of moving-image consumption.

Specially commissioned for the festival, Gerald Byrne’s paradigmatic expanded-cinema installation ‘A Thing Is a Hole in a Thing It Is Not’ (above) revisits key historical moments in the evolution of Minimalism through contemporary footage and ventriloquised audio. On free-standing projection screens, with overhead audio, Byrne creates an ambience where the overriding sensation is of what the critic Jorg Heiser has called “affective uncertainty”, which he regards as common to the best contemporary video art. This sensation is achieved through the oscillating relationship between the exhibition’s moving images and audio (constantly shifting between being “in agreement, engagement and sympathy” with each other, as Michel Chion would put it, and being in “active antipathy”).

In one reconstruction, an actor’s narration of sculptor Tony Smith’s thoughts about the centrality of the American industrial landscape within his then-new work is layered with contemporary footage of a night-time drive through that very landscape. In another projection, obtuse shots of a contemporary radio interview are played against actors restaging a historical conversation between artists Frank Stella and Donald Judd. Elsewhere the sounds of Stella and Smith somewhat melancholically haunt footage of a glacial tour of a museum, which follows the indifferent consumption (by ‘art lovers’) of a recent Minimalist exhibition.

Immersed in the space, questions multiply and notions of ‘truth’ evaporate: is that Stella speaking? Is this new or old footage? When did this happen? This is a work (like the GI festival itself) suffused with the idea of hauntology. As the writer Mark Fisher has recently written, “hauntology isn’t about the return of the past, but about the fact that origin was already spectral.” This sense of nothing being certain or set permeates Byrne’s piece. The work’s rather narrow focus (how engaging is this art about art to anyone outside the art world?) is an issue, but its critical meditation on the instability of time past and time present, and the mutability of fact and fiction, is distinct from the empty nostalgia that blandly dominates much discussion of ‘history’. 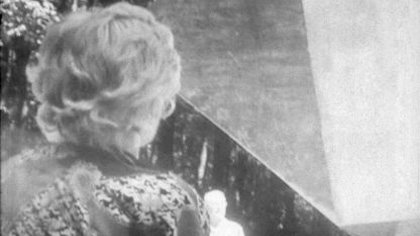 In Croatian artist David Maljkovic’s installation ‘Images with Their Own Shadows’ (above), the focus is on the “spectres of lost futures” (to borrow again from Fisher). Here the summoned ghosts channel and narrate the idealistic, utopian hopes of modernist architecture. Occupying the exhibition space are a series of free-standing and floor sculptures, photographic collages and film projections, which obliquely refer to the work of the Yugoslavian architectural group Exact.

As with Byrne’s piece, historical and contemporary images and audio are collaged, producing a similarly destabilising temporal vortex. Here the ‘historical’ audio text, in which a group member recounts his experiences at the 1958 Brussels Art Fair, is overlapped with contemporary shots of an iconic piece of architectural modernism, all stainless-steel, geometric, rational futurism. This surviving relic of the utopian past is set against portraits of contemporary youth, who stare plaintively into ‘empty space’ (their gaze away from the old modern monument’s presentation of a shiny future). This architecture’s hopes for a brighter, better, attainable tomorrow now seem alien and distant. The work seems to oscillate between tangible melancholia and latent anger at neoliberalism’s erasure of these kinds of promised future. It’s all the more pointed for being rooted in Croatia. 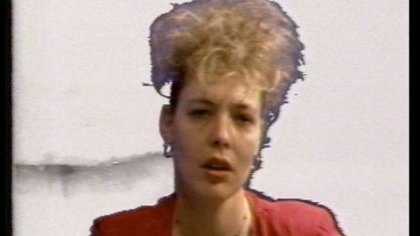 Street Level’s exhibition ‘Lost and Found’ (above) offers an interesting historical comparison with these works. Featuring work by Kevin Atherton, Stephen Littman, Pictorial Heroes, Zoë Redman, Stephen Partridge and Tony Sinden, this archival representation of key Scottish video pieces from the 1970s and 80s returns the viewer to a period when the radical promise of video art – to intervene in the fabric of the mainstream – still seemed a tenable proposition. The exhibition is right to assert the Scottish art world’s amnesia in relation to the history of these practices; in this respect, its act of historical recuperation is vital. However, it would be wrong to consign all of the work in this show to the security of the ‘past’.

Kevin Atherton’s new work ‘The Television – repeat’ uses archival footage of his own practice in a critical, candid and highly entertaining manner. Since the 1980s, Atherton has exhibited as a talking, frequently garrulous and amusing TV monitor. In the past his disembodied voice emanated from a monitor on a plinth; now he has ‘upgraded’ to a flat LCD screen on a chair. It’s a simple conceit – the TV that talks back – but while it may not possess the formal complexities of Byrne and Maljkovic’s trademark forms of expanded cinema, its tone and voice is both radically critical and entertaining – a position which isn’t oxymoronic for Atherton). Interviewed then and now, the TV ruminates on its previous hopes, and rails against the current horrors of the mass media. The voice is infectious and galvanising in its urgency, not least because time hasn’t blunted its desire and hope for change and resistance.

John Beagles is an artist and lecturer at Edinburgh College of Art.