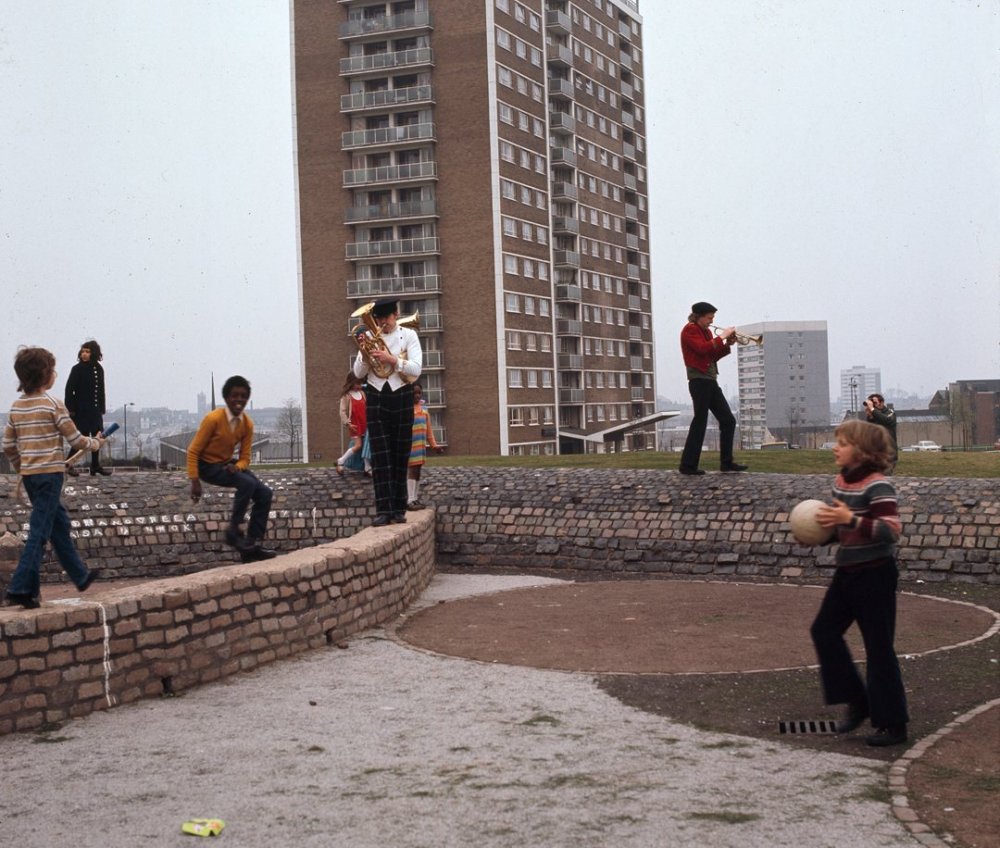 Fanfare in the community: young denizens of Birmingham’s Newtown cut loose with Mike Westbrook’s marching band, one of many spillover events from the Arts Lab
Credit: Tony Jones

‘It was ragged and naïve /
It was heaven’

– this was David Bowie’s experience of a Lab-run event at the Croydon Road recreation ground, commemorated in his 1970 single Memory of a Free Festival. It’s one of few traceable references to the 40 or so arts labs that sprang up across the UK in the late 1960s – unknown to most save a few devoted Bowie fans who will recall that he co-founded the Beckenham Arts Lab early in his career. We’re not likely to know about them because they all petered out after two or three years of poor management or not enough get-go or too few volunteers. In Yarmouth, Nottingham, Worthing and Norwich, the artistically curious came together with the idea of forming a counter-cultural, regional arts hub to rival the well-greased avant-gardist movement afoot in moneyed London. But not even Bowie – or Jones, as he was then – could turn his local Lab to any durable good.

The same year of Bowie’s valedictory ballad, leagues north the Birmingham Arts Lab was expanding with every month into its first permanent premises – a youth centre on Tower Street in Newtown. And as the sole survivor of the arts lab movement, it’s become the stuff of legend.

Ian Francis, founder of Birmingham’s Flatpack Festival, has been waiting for the opportunity to investigate it ever since he visited an exhibition of the Lab’s silkscreen posters at the Museum & Art Gallery, shortly after moving to Birmingham in 1997. So this year’s festival – running for ten days over Easter – is dedicated to the legacy of the Birmingham Arts Lab, which sighed its last in 1993. A programme of workshops, docs and an audio installation will authenticate the myth and celebrate the ingenuity of its founding members, whose precedent still inspires an active DIY arts scene today.

The genesis of the Lab can be traced to a meeting between five men (Tony Jones, Mark Williams, Dave Cassidy, Fred Smith and Bob Sheldon) who had all worked at the Midlands Arts Centre in Birmingham and grown fed up with its too-sensible agenda. They decided to create their own exhibition space that would permit them to display and explore experimental cinema, music, theatre and dance. For the first six months, they ran a series of fundraising events called Strange Days (after The Doors album) – featuring bands accompanied by Smith and Cassidy’s then-popular Amoeba Lightshow – while operating from Tony Jones’ bedroom at his mother’s place on Oakwood Road.

Jones’ interest was in film, and when the Birmingham Settlement offered them a share of the Tower Street building, he and his partner-in-purloining-crime Pete Walsh set to building a working cinema space. Jones – who moved on to Cambridge to programme its Arts Cinema, direct the Cambridge Film Festival, co-found the City Screen/Picturehouses network (sold last year to Cineworld) and now heads up the Cambridge Film Trust – remembers equipping the Lab’s gym-auditorium with materials fetched from building sites: “We used to pinch the scaffolding, the clamps, hardboard, chipboard, the industrial Sterling board – anything that was available. You’d just help yourself basically.”

They also inherited cast-offs from bigger, wealthier cinemas, and Jones paints an amusing picture of the magpie-team at work: “The Birmingham Film Society gave us their screen when they moved from the Crescent Theatre. They helped us take it down and we carried the frame complete – 20ft by 10ft – through the centre of Birmingham late at night…”

With a 16mm projector, which they operated themselves, they were able to show, in maiden weeks, Marco Ferreri’s surreal Dillinger is Dead and the Andy Warhol-Paul Morrissey collaboration Flesh. At this early stage, the organisers financed the Lab themselves – until they took a loan from the bank for £300 to upgrade to a 35mm projector. (With cumulative experience, they were later entrusted with regular funding from West Midlands Arts.) They had their own in-house communications organ: a printing press hand-built and worked by cartoonist Hunt Emerson. Simon Chapman installed a silkscreen printing facility with which artist Ernie Hudson produced his famous paint-and-photo posters to advertise forthcoming events.

This hands-on pragmatism en masse is easily overlooked when so many anecdotes exist to preserve the Lab’s more exuberant past. But clearly, for Jones, much of the enjoyment in running the Lab lay in the raw mechanics, which were in a constant state of evolutionary flux – and will be lost on most of us today. Initially, they used a carbon arc projector, which, by all accounts, is a delicate piece of machinery: it burns a green flame and had the potential, if not closely monitored, to set fire to the reel of film. (Among the many regular volunteers at the Lab, one man took it upon himself to hold steady the carbon arc controls for hours at a time. He didn’t speak much; they nicknamed him Dick Arc.)

As Jones recalls: “Underneath the staircase we had a huge old mercury arc rectifier, and we had to use that to strike up the carbon arcs. Then, when we transferred to Xenon lamps, we changed to different rectifiers altogether. We learnt a lot about the technical side of things, and would often speak to the projectionist at the Odeon Queensway, or at Scala in its heyday. They were showing Lawrence of Arabia on a long run there – so we’d watch and aspire to 70mm. Both Pete and I made sure we kept 70mm going, and when Pete moved to Dublin to join the IFI [Irish Film Institute] he insisted on their having 70mm projectors, and I had 70mm put in at Cambridge. We’re still two of only five venues in the UK and Ireland with the capacity to show 70mm film.”

If Jones and Walsh were matched in their mutual appreciation of the nuts and bolts (“To this day,” muses Jones, “there’s never been a quieter, more compact 35mm projector than the Philips FB7”), they also had their separate expertise. Where Walsh took charge of programme notes, Jones was a gifted and tenacious transactor. In acquiring films for screening at the Lab, there wasn’t a distributor or library he hadn’t had negotiations with. The legendary US film collector Raymond Rohauer lent Jones the complete works of Buster Keaton, which he screened back-to-back over the course of one evening while “playing badminton downstairs as well”. The filmmaker Jack Hazan paid a visit to the Lab when they showed A Bigger Splash: “We persuaded him by sheer force of persistence that we should be showing it… There wasn’t much we didn’t get.”

Eventually, the Lab outgrew its labyrinthine HQ at Tower Street, and moved to new premises on Holt Street on the Aston University campus. On paper, the venue appeared pleasingly similar to the first: an old brewery, repurposed, with potential for gradual expansion. But though the cinema flourished as before, they never received the adequate funding to rehabilitate the Lab’s theatre and music scene. There was talk of a disused garage on the complex that they planned to use as a second exhibition room, but it was much like waiting for Brigadoon – except it never materialised.

Jones left for Cambridge in 1979, whereupon Walsh took the helm of the film programme, which by then had overwhelmed the Lab’s other media outlets and was renamed The Triangle. Bending to funding criteria – in this, its last phase – the Lab adopted a repertory house-style, and stopped the progressive-contemporary fare of earlier days.

There was a sadness that attended the Lab’s decampment, which is generally considered the end of an era. For certain, it wound up the Lab’s famous double- and triple-billings, which fused together artists of disparate disciplines: one on occasion, it screened the René Clair short film Entr’acte with live piano-accompaniment by two pianists on one upright, “and then” says Jones, “we had some ballet and some avant-garde music.”

The comedian John Dowie, who cleaved to the Arts Lab from its inception in 68, and valued the support it provided young artists like himself, disdained the streamlined Lab-that-was at Holt Street: “I prefer my memories of the Lab to remain memories of Tower Street. I don’t think I would have enjoyed the transition of Arts Lab to Arts Centre; of multi-media activities to cinema only (as good as that cinema may have been), or of replacing a rough-hewn do-it-yourself approach to staging art of any kind to a glossy, government-funded method, which seems effective only in terms of killing the things that the rest of us love.” 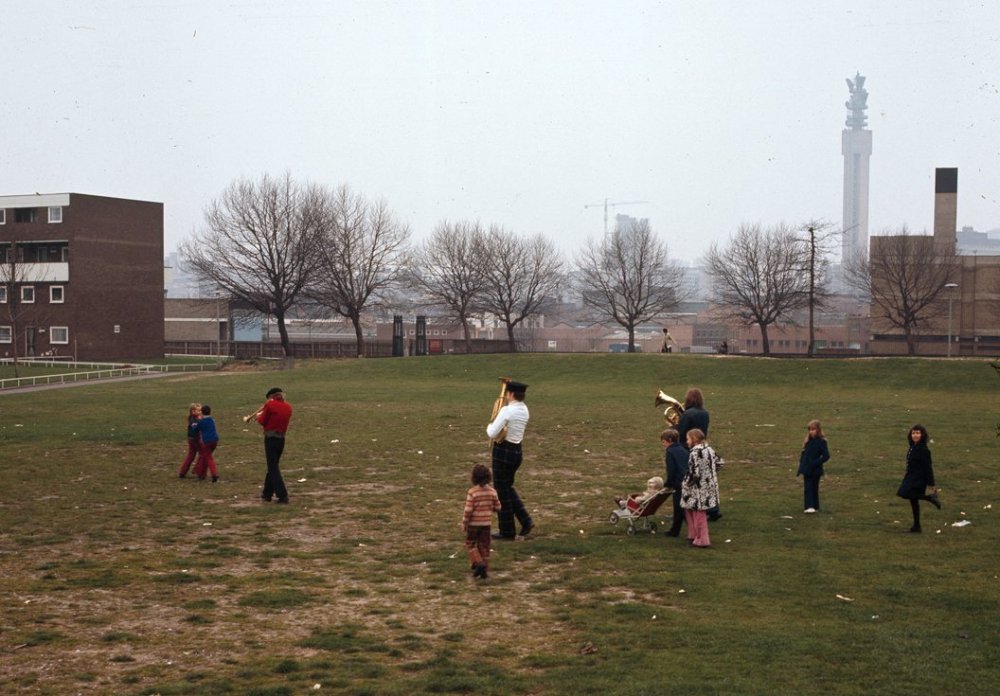 Those who had first-hand experience of the Lab at Tower Street – and there were many, it seems, who tried the door up the iron fire escape – remember it as much for the community it cultivated as for its open, inclusive, multi-disciplinary events programme that gave a window onto innovative and foreign art never before made accessible to rundown, provincial, auto-industrial Birmingham.

And it was always Birmingham – always for love of the city – that kept the Lab churning. Ian Francis at Flatpack, who found in the Lab’s first incarnation a transferrable tool-kit for setting up his own breakaway film initiative, attributes the longevity of the Lab to the city’s desperate need for the services it provided: “I think it was really important, especially if you’re somewhere like Birmingham and outside of the main centre of production. You get used to things coming down the pipe from somewhere else.”

[And indeed, the Lab poured itself into the local community. Such was its open-handed reputation, Peter Houghton, then-director of the Birmingham Settlement, appealed to Jones and company to try to integrate the disaffected kids into the Lab’s activities to keep them clear of the borstal. They snuck them onto the Arts Lab football team, joined a Saturday league, and won a cup.]

Tony Jones and Terry Grimley (another of the Arts Lab’s earliest members) both speak of the current state of film exhibition in Birmingham with the same impassioned/emotive intensity one suspects herded the Arts Lab to success all that time ago. Jones still registers dismay at the contrast in the cultural arts scenes in Cambridge and Birmingham: “Moving from one to the other, you realise what a job there is to do in Birmingham. The same sort of films would do three or four times the business [in Cambridge], and still will do so – even though you’ve got a city a tenth of the size of Birmingham.”

Thankfully, Flatpack flies the flag for independent cinema exhibition in the midlands. Francis is optimistic about the changed landscape of Birmingham’s arts scene, which favours small organisations over a single, dominant arts space: “That hasn’t meant it’s split up into silos: those small organisations all talk to each other and collaborate. That’s one of the nice things about Birmingham: its open, collaborative ethos. It’s not particularly cliquey, and people generally feel that they have more to gain by working together.”

And so it was in the 70s. In hindsight, it occurs to Grimley that the Lab was “a kind of Noah’s Ark which swept up a lot of talented, creative and/or odd people to help them survive a really drab low-point in Birmingham’s history – sandwiched between the demolition derby of the 1960s and the 1980s renaissance. Sadly, the renaissance now seems to be on hold again… and, of course, we’ve never had a successor to the Arts Lab and Triangle cinema.”