In print and digital from 6 June. 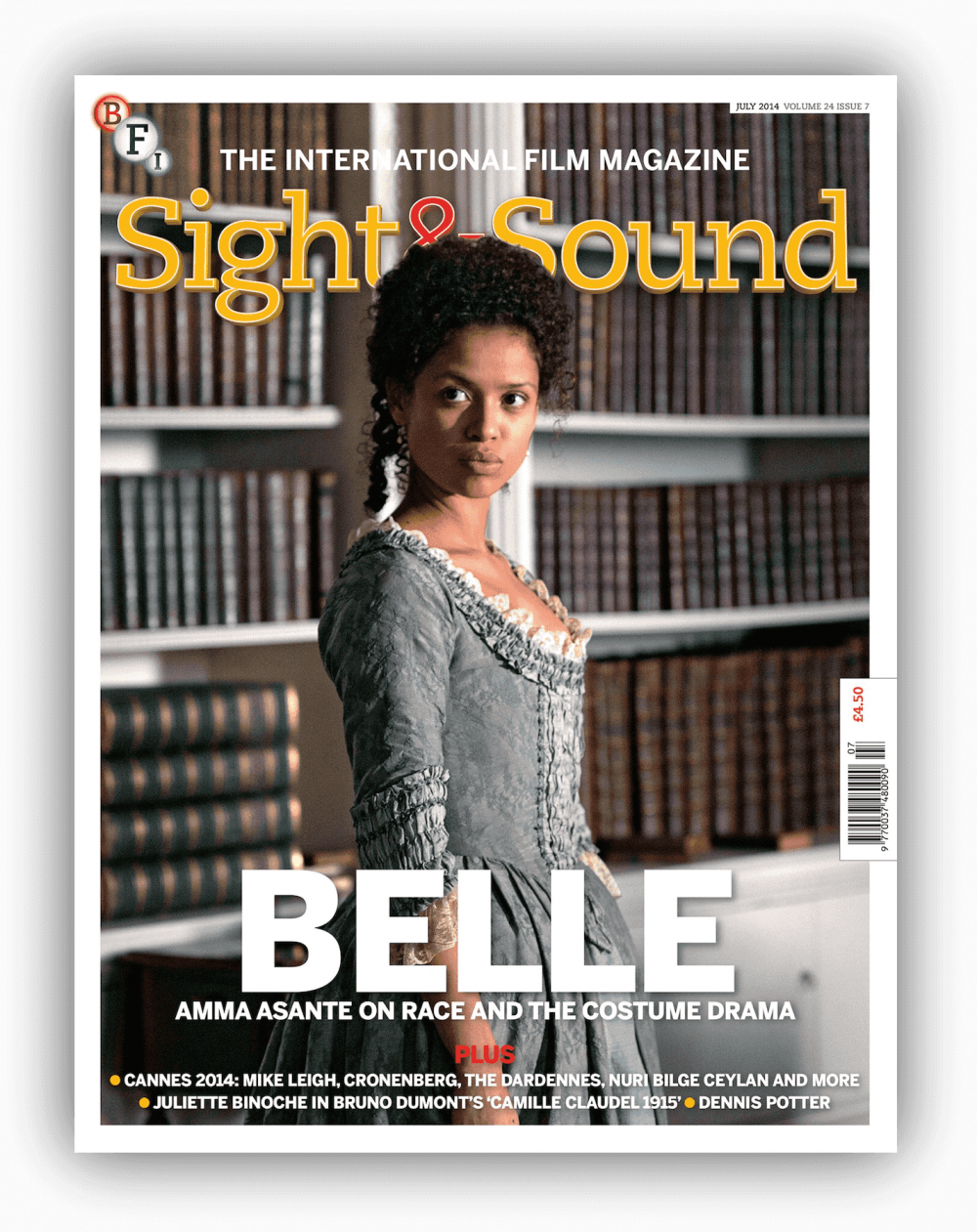 The British costume drama. It’s a phrase pretty much designed to make you grab your hat and head for the hills at the prospect of yet more bonnet-brandishing heritage horse-play. But the times they are a-changing, and costume dramas from these shores too it seems.

First there was Andrea Arnold’s visceral, pulpy rethinking of Wuthering Heights, which made no bones about Heathcliff’s racial origins and the racist society he inhabited. Even more exhilarating and boundary-busting is this month’s cover feature Belle, directed by Amma Asante and starring Gugu Mbatha-Raw, where matters of race are once again to the fore, empire and slavery not just subtextual undercurrents or overlooked backdrops but the actual meat of the narrative.

Set at the end of the 18th century as abolition was starting to flex its political muscles, Belle is a fictionalised version of a little-known story about mixed-race heiress Dido Elizabeth Belle, in which our heroine attempts to liberate herself and others from the constraints – social, romantic, existential – imposed by gender and skin colour. So deft and subtle is the playing out of this scenario that it’s hard to credit it’s only Asante’s second film. Ashley Clark chats to Streatham-born Asante about Belle’s gestation and her own obstacle-hurdling in an industry where faces of colour are still the exception.

Belle’s spirit of flinty independence, of challenging convention and expectations, is picked up in three other features this month. First up is a dissection of that titan of the small screen Dennis Potter, indubitably Britain’s greatest ever TV dramatist, whose memory is honoured by a BFI Southbank retrospective throughout July. As Graham Fuller notes in his analytical piece on Potter, his extensive corpus is “unmatched for the density of its interrelatedness and the range of its polemical concerns”. An auteur of the small screen, in other words, preoccupied like his literary forebears Blake and Lawrence with England’s capitulation to soul-crushing commercialism, amongst numerous other ills.

Fine as far as it goes, but what viewers of a certain age will most remember are, firstly, the electrifying shock of Potter’s formal innovations, his anti-naturalist subversions of televisual norms, particularly the loaded, ambiguous deployment of lip-synced pop songs; and secondly, his fearless, utterly remorseless self-interrogation and attempted self-overcoming, the thrilling dramatisation of all the tensions inherent in his anguished autobiography. It’s hard to imagine such a brilliant maverick ever being allowed to grace and dominate the small screen to such an extent again.

To celebrate the start of BFI Southbank’s mammoth five-month historical survey of Chinese cinema, Noah Cowan homes in on Second Generation director Fei Mu, best known for his masterpiece Spring in a Small Town. Arguably the greatest of a glittering bunch of directors to flourish in 30s China, Fei Mu was somewhat at odds with his Hollywood-inflected, leftist contemporaries, preferring formal experimentation, poetic symbolism and the promulgation of Confucian values. His traditionalism was espoused in a series of theoretical writings, the most celebrated of which argued for a director’s capacity to create ‘air’, the invisible yet crucial element that captures the viewer. Such subtleties eluded most contemporary critics, who found Spring in a Small Town to be decadent, boring and backward. Audiences too stayed away, and Fei Mu never made another film, although his influence is still keenly felt in other directors’ work, notably Jia Zhangke, Stanley Kwan and Wong Kar Wai.

Last of this month’s solitary pioneers is Bruno Dumont, whose magnificent L’Humanité was also ridiculed by critics unable to negotiate its raw strangeness. Somewhat improbably, Dumont’s latest, Camille Claudel 1915, stars Juliette Binoche as the eponymous artist, incarcerated by her dramatist brother Paul in a mental asylum where she would live out the rest of her days. Jonathan Romney pays tribute to the finely calibrated expressiveness of ‘le visage binochien’, juxtaposed controversially in this film with those of real-life psychiatric patients – while Dumont explains his views on mysticism and the sacred. “I believe that cinema is a tool for showing that behind something, there’s something else.”

And after all that, there’s still our Cannes coverage, eight pages unpicking the best of this year’s crop on the Croisette. By all accounts a strong if not absolutely outstanding edition, this year’s Cannes could boast striking new work by Jean-Luc Godard, Mike Leigh, David Cronenberg, Lisandro Alonso, the Dardennes, Fred Wiseman, Abderrahmane Sissako, Andrei Zvyagintsev and of course the eventual Palme winner Nuri Bilge Ceylan.

There were even a few more women filmmakers than usual, including Alice Rohrwacher’s The Wonders, which was awarded the Grand Prix. President of the Jury was Jane Campion, who found time during her busy viewing schedule to share with Isabel Stevens her thoughts on, amongst other things, the near-impossible process of selecting the winners: “How are you going to compare this orange with this banana?”

COVER FEATURE: Portrait of a lady

Amma Asante’s Belle presents a fictionalised account of the true tale of a mixed-race aristocrat in 18th-century England, a delicate portrait of the complexities of race and racism that strives to show that nothing in life is ever simply black and white. By Ashley Clark.

Angels and devils: the dark dreams of Dennis Potter

Britain’s pre-eminent television dramatist produced a body of work unmatched for the range of its polemical concerns. Pioneering the use of experimental techniques designed to shake viewers from their passive slumber on the sofa, his barbed, darkly comic work laid bare his own demons as he sought to shine a light on the nation’s spiritual longings, sexual anxiety and political malaise. By Graham Fuller.

Bruno Dumont’s austere evocation of the life of a troubled artist in a French asylum, Camille Claudel 1915, is driven by a complex, enigmatic performance by Juliette Binoche. Here the director explains why he urged her to ‘do nothing’ in front of the camera, and how the transcendent power of cinema helps transform reality to reveal the sacred in everyday life. By Jonathan Romney.

Love among the ruins

A nationalist who sought to promote Confucian values, director Fei Mu emerged with China’s Second Generation in the 1930s but rejected their leftist political agendas. Pursuing his own poetic, experimental trajectory, his cinematic voice found full flower in 1948’s Spring in a Small Town, the tale of a love triangle set amid the post-war devastation of the Yangtze Delta. By Noah Cowan.

In the frame: The weight of history

Dennis Hopper’s ‘lost’ photos from the early 60s present an oblique autobiography of a man in flux documenting a nation in transition. By Charlie Fox.

Object lesson: As time goes by

Among the innumerable ways of marking the passage of time in a film, nothing has proved more enduring than the simple calendar. By Hannah McGill.

Through his collaborations with, especially, Coppola, Pakula and Allen, the great DP changed the way films look. By Michael Brooke.

Ryan Coogler has been hailed as the new Spike Lee for Fruitvale Station, his tale of the final hours of a young black man killed by police. By Kaleem Aftab.

Why do we recall movies in static fragments when we remember the rhythmic flow of songs – and is there a lesson here for filmmakers? By Mark Cousins.

The UK Film Centre in Cannes had a lot to celebrate this year, but perhaps it’s not the best place to try to tout brand new projects. By Ben Roberts.

Certification: Life on the margins

New laws in the UK requiring the classification of previously exempt films risk adding to the financial woes of niche distributors. By Anton Bitel.

Netflix’s launch in Europe, with its monthly subscription model, threatens to overhaul the system of release windows on the continent. By Nick Roddick.

Cannes: Let there be light

For all the talk about the festival becoming a closed shop for a select group of directors, such as Godard, Cronenberg and the Dardennes, 2014 produced one of the best programmes in years, offering an incredibly varied range of films and at least half a dozen genuine contenders for the Palme d’Or. By Nick James.

Jane Campion, the Competition jury president, on the vexed issue of how to compare oranges and bananas in the selection process.

For the novice – and the old hand, come to that – Cannes offers a bewildering variety of experience, in and out of the cinema. By Isabel Stevens.

The spotlight on Filipino cinema at the recent Terracotta Film Festival in London revealed an industry in rude health, says Anton Bitel.

Preview: A fly in the soup

Soundings: I work the line

While the use of film dialogue in music is nothing new, the internet has transformed the way in which musicians approach such samples. By Frances Morgan.

At the British Silent Film Festival, long-forgotten stars once again enjoyed a brief blaze of glory. By Pamela Hutchinson.

Festival: In with the old

Aatsinki: The Story of Arctic Cowboys
The Art of the Steal
Bastards
Battle Company: Korengal
Belle
Blended
Brick Mansions
Camille Claudel 1915
Chef
Chinese Puzzle
Common People
Cycling with Molière
Devil’s Knot
The Fault in Our Stars
Godzilla
Grace of Monaco
The Hooligan Factory
In Secret
Leave to Remain
Mariachi Gringo
Miss Violence
Mistaken for Strangers
Oculus
Of Horses and Men
112 Weddings
The 100-year-old Man Who Climbed out of the Window and Disappeared
The Other Woman
Plastic
Return to Homs
Road
Secret Sharer
Seven Streets, Two Markets and a Wedding: Glimpses of Lost London 1930-1980
3 Days to Kill
Touchy Feely
When I Saw You
X-Men Days of Future Past
The Young and Prodigious T.S. Spivet

The films of Alain Robbe-Grillet,  standard-bearer of the nouveau  roman, are dark, subversive – and a lot more fun than you might think. By Ian Penman.

Despite its small-town setting and air of shiny Eisenhower-era prosperity, Violent Saturday is deeply steeped in noir. By Nick Pinkerton.

Roger Vadim’s vampire-themed art movie was the template for the stylish, self-aware horror pictures of the 60s and 70s. By Kim Newman.

Boomerang!, A Tree Grows in Brooklyn and Man on a Tightrope. Reviewed by Michael Brooke.

John Wayne: The Life and Legend
Garden of Dreams: The Life of Simone Signoret
Pola Negri: Hollywood’s First Femme Fatale
Lady in the Dark: Iris Barry and the Art of Film.

Under the Skin and body language; reasserting the male gaze; spoiling The Two Faces of January; A Touch of Sin and American capitalism.

The extended shot of Bob Hoskins’s London gangster being driven away by IRA killers caps one of the late, great actor’s finest performances. By Trevor Johnston.