Film of the week: Hors Satan

Bruno Dumont’s pantheist parable of a silent supernatural ‘healer’ has its inconsistencies – but also a berserk integrity. 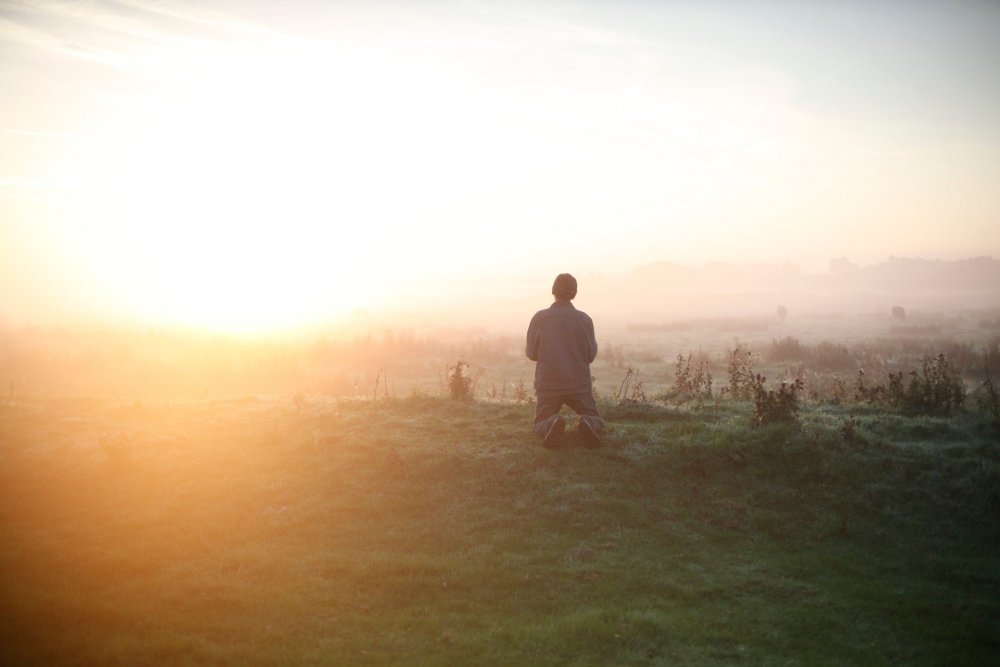 Spoiler alert: this review gives away a plot twist

Bruno Dumont is at it again, this time with faster cutting, more mannerist compositions and characters so gnomic they don’t even have names.

Hors Satan is a kind of secular parable about the divine – and the satanic – in man. Its protagonist is a taciturn loner who communes with the landscapes, seascapes and sunrises of the Pas de Calais and sleeps rough near a hamlet. He executes rough justice on two wrongdoers, and has evidently acquired a local reputation as a healer. His phallus (not shown this time; Dumont has moved on from the brutal physical frankness of his early features) rescues one girl from what may be a case of demonic possession and later gives another woman, a backpacker passing through the region, a life-changing experience of casual sex. If this guy is in some sense holy, then the hamlet also harbours his opposite, a fat, shifty-looking dog-owner who kills and rapes people in the woods. It all ends well: the bad guy is arrested, a dead girl comes back to life, and our antihero makes off with the bad guy’s dog. Absurd, of course, but also oddly impressive.

Dumont’s filmmaking ultimately rests on an anomaly. Most of his six features have been set in northern or north-western France, the region he knows best and loves most, and its landscapes are observed and represented so intensely that they become ‘characters’ in the films. But this very local specificity is offset by Dumont’s penchant for abstraction – some would say, wilful obscurity – in matters of characterisation and plotting. This anomaly is more of an issue in Hors Satan than it has been in previous films because the characters here are blanker.

The nameless protagonist (David Dewaele, a less expressive echo of Fassbinder’s actor Gottfried John) is so close to the landscape that he lives in it, needing nothing more than a nightly log fire to survive in the open. He rarely speaks, but his presence is imposing and his stare, alternately wondering and accusatory, is penetrating. His nearest analogue in European cinema would be Terence Stamp’s supernatural visitor in Pasolini’s Theorem, but Dumont has no time for Pasolini’s political/social/class questions. The guy here is simply an embodiment of the spirit of the landscape, beyond good and evil, just doing what a human cipher’s gotta do: punishing the wicked, exorcising the odd demon, mechanically giving a stranger the ultimate sex-death thrill, bringing an innocent victim back from the dead.

The trouble is that Dumont can’t bring himself to eliminate the social and psychological dimensions altogether. The village murders bring prosaic visits from the local gendarmerie, and a man hired to patrol the nearby conservation area puts in a few desultory appearances. Dumont feels the need to show us how his protagonist eats (he is evidently so revered locally that he has only to knock on some doors for unseen residents to proffer ready-to-go sandwiches or goodie bags of food), although oddly not how he defecates, keeps clean and shaves. The omissions provoke irreverent thoughts: surely this guy reeks? How can the others bear to come near him? 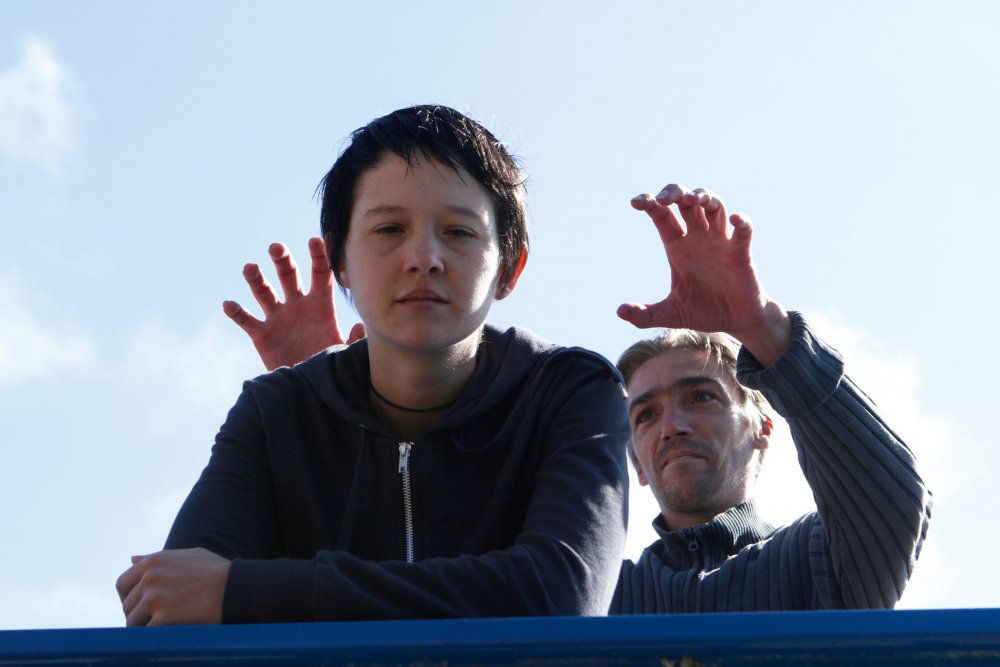 Worse, the central non-romance comes with heavy psychological signposts. The protagonist is adored by a goth teenager (Alexandra Lematre, all pallor and black clothes) who is being abused by her stepfather. They start out seeing each other as surrogate father and surrogate daughter; she turns to him for protection and with her connivance he shoots the stepfather dead. As the film goes on, the girl’s feelings for the guy become overtly sexual, and she asks him to take her virginity – a request he firmly rejects. It’s on the night when she finds him asleep by the embers of his campfire that she presses on into the woods, where she will be raped and killed. In short, the main characters are caught somewhere between their symbolic functions and a more or less credible reality. Dumont never quite succeeds in bridging the gap between pantheist fantasy and mundane village life.

He tries to sidestep the problem by restricting his CinemaScope framing to close-ups and fairly extreme long-shots, building a take-no-prisoners visual rhetoric which is designed to forestall scepticism. His only real aesthetic innovation is to combine wide-angle shots of his characters with close-up sound: we often see distant figures trudging across the landscapes while hearing their rasping breaths loud and clear. The visual rhetoric stands or falls on its own impact; there is no music of any kind, and Dumont prides himself on dispensing with the services of a sound editor, using only the original, direct sound.

Mostly the images are ‘monumental’, as if to assert that no other way of seeing these characters and situations is possible, but occasionally they slip into unwitting self-parody: a widescreen shot in which the guy’s rifle suddenly enters from off-screen looks like an idiotic pastiche of Sergio Leone, as does a later shot in which the conservation-area guard steps into frame, turning a long-shot into a close-up. The obvious point of reference for the overall approach is again Pasolini, particularly his ‘ethnographic’ versions of Christian and pagan myths. But Pasolini would have had no time for Dumont’s mysticism, and he always kept his fetishisation of strong, silent alpha males under better control. 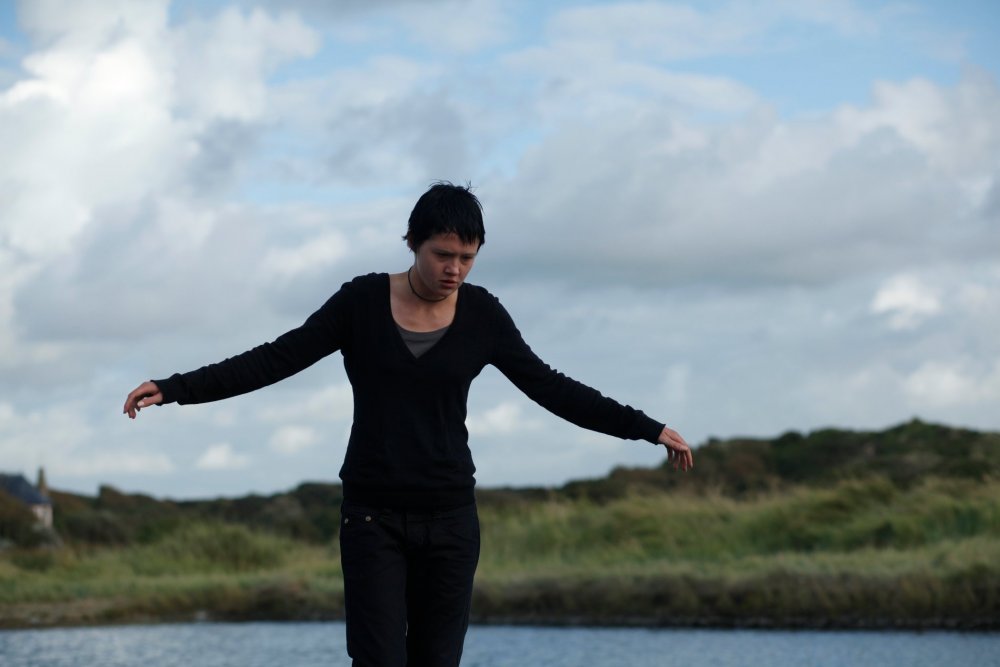 Avowedly atheist, Dumont acknowledges Emile Zola and the Catholic novelist Georges Bernanos as seminal influences. (He should obviously start reading D.H. Lawrence, whose pantheism and tendency towards phallic worship would be right up his street.) The fact that this is the third of his features to cite Christian mythology in its title – his 1997 debut was called The Life of Jesus and 2009’s Hadewijch was named after a 13th-century religious mystic – testifies to his abiding fascination with the profession of faith and the human impulse to seek the spiritual.

What Dumont himself is seeking, though, is a secular spirituality, closer to Taoist or Nietzschean philosophy. The protagonist of Hors Satan kills two ‘bad’ guys – the girl’s stepfather, the guard – with impunity, but suffers the mental agonies of the damned when he accidentally shoots a deer and has to batter its brains out with a rock to end its suffering. His survivalist code is rooted in his worship of nature (he kneels as if in prayer at the spectacle of the sunrise), and it’s the immanent power of nature which he trusts to effect the reanimation of the dead girl, giving the film its climax. Many viewers will be too cynical to accept this premise.

And yet, and yet… Whether you think Dumont is inspired, deluded or fraudulent, there’s no denying that his project has a certain berserk integrity. It coalesces in the two scenes in which the protagonist has sex. In the first he brings ‘sexual healing’ to a girl who has lapsed into catatonia, possibly a victim of satanic possession. In the second he services a passing backpacker, causing her to foam at the mouth. In neither does he evince the least sign of orgasmic pleasure himself; he’s simply following nature’s orders, transforming two women’s lives by giving them a quasi-divine experience.

Dumont puts his audience in the same position as those women, liberated by their encounters with a symbolic phallus. The sexual politics may be somewhat Neanderthal, but the aesthetic is as rigid and thrusting as any you’ll find in contemporary cinema. The film ends with its antihero taking to the road of life with the faithful dog he’s inherited from the bad guy, so the door is open for a sequel.

Related to Film of the week: Hors Satan