One-man wild landscape artist Scott Barley has been creating elegantly etherealised collages of nature’s sublime since 2012 – usually shot at dusk, sometimes including horses. “It’s when I feel most alive,” he says upon the release of his first feature, Sleep Has Her House – “to be in such awe that you’re rendered small, meaningless and afraid.” 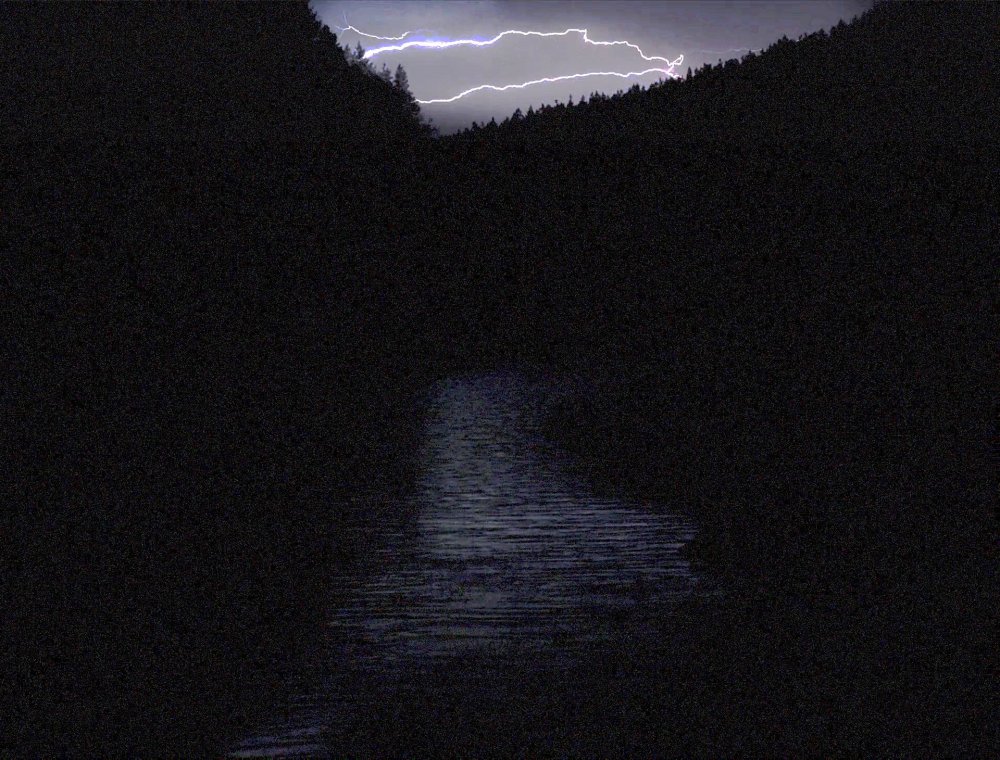 A frame from Scott Barley’s feature Sleep Has Her House

Some filmmakers innovate; others iterate. Some, such as Scott Barley – a young filmmaker who has spent several years making slow, concentrated landscape films on his mobile phone – manage to do both of these things; repeating and refining, reinventing when necessary.

Sleep Has Her House screened at Sheffield Doc/Fest on 11 June 2018. A screening at Deptford Cinema, London on 7 July has sold out, and an extra date added on 5 August.

Scott Barley’s films are available for digital viewing and cinema exhibition from scottbarleyfilm.com, along with his writings and more.

“In a way, I am making the same film over again,” Barley tells me by email, when asked about the consistency of the aesthetic of the films he has been making and posting online since 2012. “You build a house, brick by brick, and then once the house is built, it is done. Then you bulldoze that house, and build it again from those pieces, but the bricks are cemented in a different order, the windows and doorways are in different places, and the rooms lead to different rooms.”

From his first film, The Eternal Melancholy of Seeing Horses in the Cold (2012) – a straightforward, slightly absurdly titled short depicting several white horses standing eerily still, a thick fog descending on the scene as night falls – some kind of style has been apparent, or at least points of fixation. Barley’s description of the making of this film provides a good grounding in the way that he works – or rather, the state from which he begins. He recalls driving through the countryside on a particularly foggy evening, seeing horses stood so still as if “inside a painting”, and deciding to film them on the point-and-shoot camera he had to hand, shooting until it became too dark to continue.

“I suddenly realised how cold I was. I’d been outside, filming the horses for two hours… without much thought or sense of time.” Looking and feeling, becoming lost within the environment. “There was no conceit, no aim. It was just a case of responding to what was in front of me.” Everything Barley has made since, he says, has been a “continuation of that evening”.

The Eternal Melancholy of Seeing Horses in the Cold

Looking at just a few of the many short films he has made since, continuities are clear. Retirement (2013) and Nightwalk (2013) – two gothic monochrome films – are nocturnal landscape studies in a style that Barley regularly returns to, foundations for future work. The former cycles through brooding images – snaking tree branches, shimmering reflective surfaces, tumultuously stormy skies and other illusory imagery, the sort of captivating, enigmatic signifiers that run through Barley’s films – as the pressured sound of rain and rolling thunder is overlain. The latter tracks several ghostly figures in striking photo-negative as they skulk silkily through a seaside location. Hours (2015) is darker still, a grain-laden, scratchy black and white micro-short recording the movements of clouds passing over the moon in the small hours of the night.

It is Evenfall (2015), though – “a silent poem to celebrate the winter light” – that sits as the most direct companion to Barley’s first film. Also silent, also featuring horses, and also set in a fixed location and made spontaneously, it is a quietly precise study of crepuscular light. As a lone horse stands solemnly in snow beneath a hillside, the day’s first rays break over, filtering out the cold blue of near-night with a contrastingly warm yellow.

When filmmaking, Barley says his aim is to be “a witness to life, landscape, and light’s silence, unaware, almost unknowingly, innately trying to capture the essence of it”, and Evenfall is a crystallisation of this. “All I know is that when I’m outside, surrendering to the elements, thats when I feel alive, and when I feel in unison with everything around me,” he says.

Hinterlands (2016) marks a point of deviation, compressing tendencies seen in all that came before it into a single pressurised short that explodes with an intensity that foreshadows the feature that would follow. Shot from a moving vehicle looking up, fixed in perspective but featuring continual motion, the film features a rolling red shepherd’s sunset caught between two lines of trees, black shadows that punctuate the crimson streaks of cloud.

Before long, the sequence begins to fracture, a shuddering baseline accompanying the juddering frame, before erupting entirely into frenzy. The image strobes whilst the camera spirals, red lines blurring into haptic disarray. “I try to convey feelings… especially ones that I cannot rationalise, or understand,” Barley says, “and I try to translate that into cinema,” something that this film speaks to. Subjugated no more, with Hinterlands, that which had been felt quietly is now unleashed with a roar.

The feature, Sleep Has Her House (2017), is even more of a culmination, a project that offered “something to work through, and to see through” what the filmmaker describes as “a very dark period in my life.” It is a fittingly dark film, elementally black almost, both in terms of the images – many of which are filmed at the greatest depths of night or in such thick fog as to be almost indeterminable – and in the mood, one of mounting, crushing despair, or rather, fear in the face of enormity.

This sensation – as Barley explained – is oddly not altogether unpleasant. “I think that is what the sublime is: to be in such a state of awe at the beauty and vastness of all of this that you are rendered so small, meaningless and afraid.” Shot over four days across remote Wales and Scotland, with a post-production period lasting much longer, it is similar to the films that came before it but more impressive in almost every way. Here Barley showcases a sense of control that had eluded him before, creating consistently arresting images, commanding the pacing and building an atmosphere that shifts gradually but noticeably, from serenity towards chaos. The duration is essential too; it takes time for these sequences to have their effect, and really for the first time, they are afforded it. 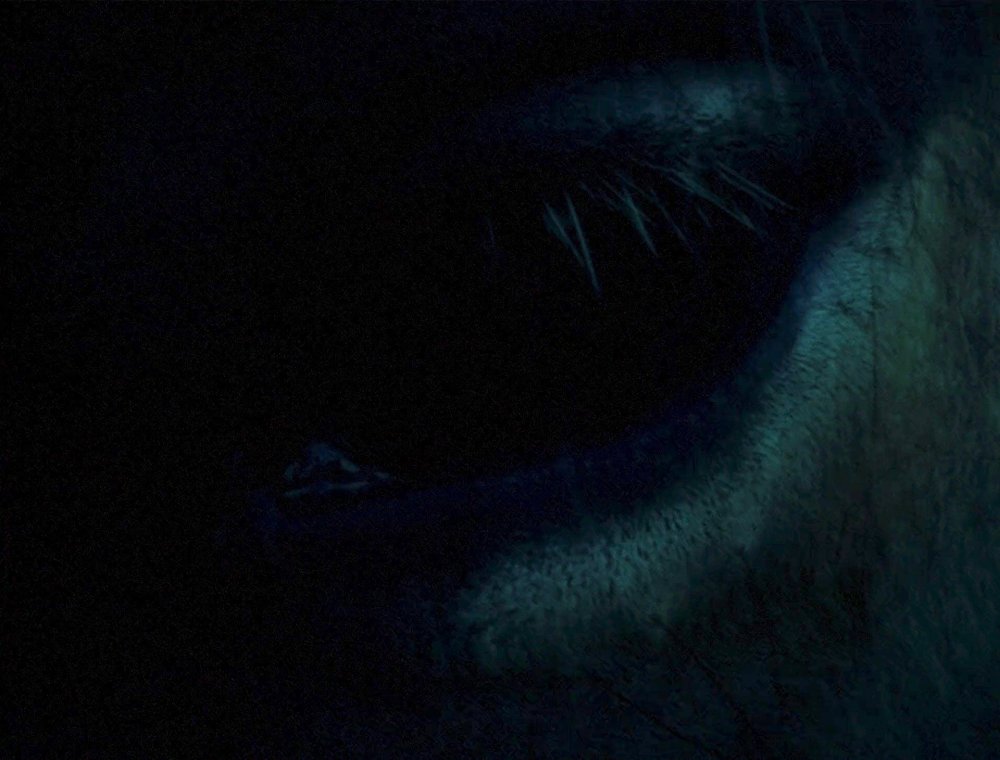 Fittingly for a film that feels like the zenith of the period before it, Sleep Has Her House opens with a shot focussed on a horse. Almost invisible in the night, the creature cuts a stark green outline against the void. Recognisable but only barely, real and also not (what horse is green?), it signposts the film to follow, a series of sequences that increase in magnitude, moving from nature’s splendour towards earthly terror.

Barley was originally a fine artist, and his filmmaking practice remains informed by his painting, recording individual images then layering them over each other into stacked plains, a “method that brings back a sense of texture and tactility that I loved from painting in a sculptural way, where I was painting with my hands with large amounts of oils, ash, spider’s silk, stone, tree bark etc.”

This technique produces a dimensionality in the image, and also a plasticity, the effect of which is often astounding, the real made ethereal through mounting and manipulation, hundreds of representational images layered to make something much more uncanny. Hard, fixed single images become soft and malleable through duplication. An early extended sequence focuses on a enormous waterfall, the blending of the veneered images creating a blurred effect like that produced by slow shutter speed photography, but in motion. The sequence transitions seamlessly between shots recorded at different distances, the cuts made invisible through layering, creating a long take that moves magically between perspectives. 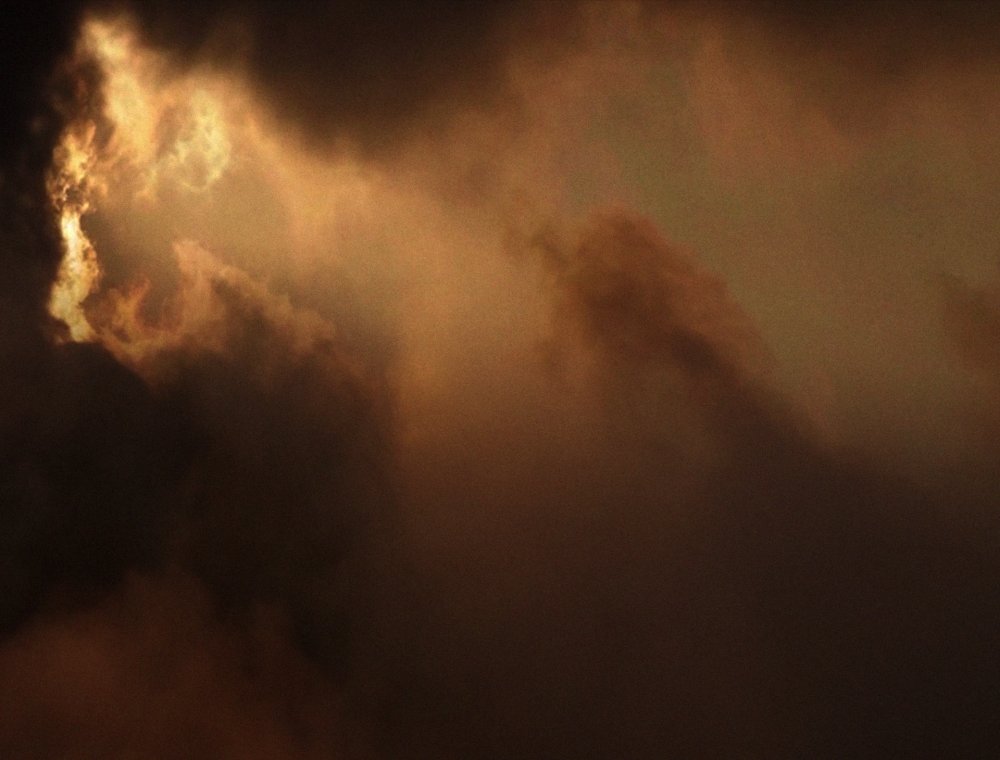 Two similar sequences stare at a sunset. One is fixed over a gently babbling stream and watches the retreating light in what feels like real time, the sun’s slight light cutting dancing flickers on the water, the night’s black swallowing the frame’s remaining white over time. A second focuses entirely on the way clouds are painted by the day’s last light, a billowing wash of soft colour that’s almost atypically bright and blissful amidst the film’s (and filmmaker’s) obsession with darkness.

Before long, these reprieves retreat, and in the subsequent sequences a sense of pressure rears again. The film concludes with violence, a great storm made from a collage of deafening sonic constructions and increasingly indeterminable, obfuscated images (most striking: closeups of a horse’s eye, whitened and fearful) giving way to total apocalypse. The film’s final cataclysmic stroboscopic image seems to directly reference the filmmaker’s earlier experiments with total abstraction, where chaos was welcomed. A reset button smashed at the first sight of familiarity or comfort.

From here, it is hard to think where the filmmaker – already well underway in the production of another feature film – can move forwards. “I think we have not even come to close to understanding and manifesting the potential of what image in tandem with sound can create as an experience. I want to keep driving for that, and see how far we can go,” he says. Sleep Has Her House shows a filmmaker who is both iterating and innovating, starting from what is familiar and creating anew. His storm snarls and screams, bludgeons and batters, and ultimately wipes clean. In the wake of disaster, the filmmaker can pick up the pieces and start a new film, begin to build a new house. “Sometimes new rooms open up that weren’t there before.”

Sleep Has Her House trailer