The cinema of Ulrich Köhler: slow-burn dramas of dislocation

As the ‘Berlin School’ writer-director’s work is celebrated in a short retrospective, we take a look at his four features to date, which all rotate around ideas of alienation and ambiguity, culminating in his speculative apocalypse tale In My Room. 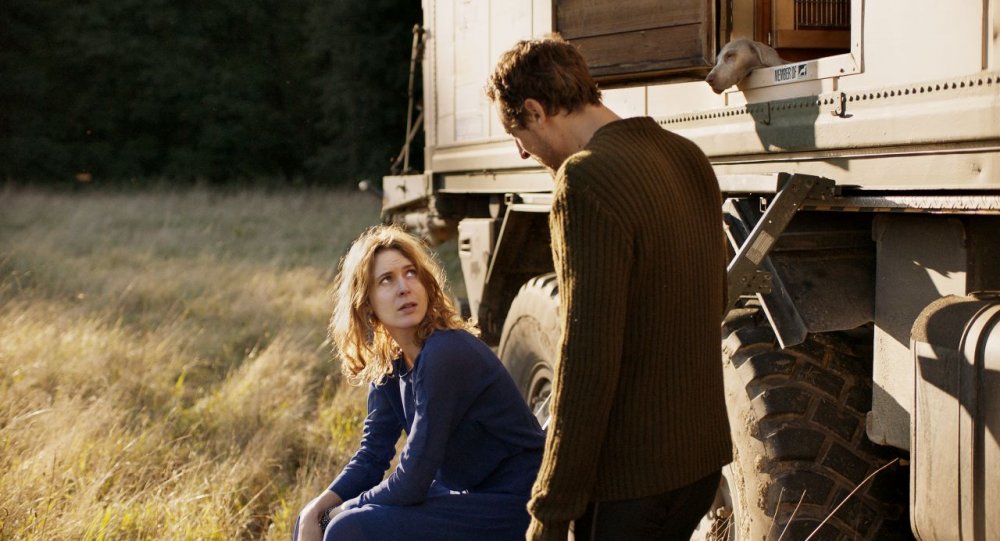 The ‘Berliner Schule’, the group with which writer-director Ulrich Köhler is most closely associated, is not a collective noun for a group of collaborators. It is not a card-carrying movement, a genre or even all that accurate as a two-word term. Instead, ‘Berlin School’ is a shorthand for a certain style, and though its moment has come and gone, and the moniker becomes less relevant as its ‘members’ are increasingly established, it nonetheless remains a descriptor more useful than it is limiting.

Ulrich Kohler’s In My Room made its UK premiere at the 2019 Glasgow Film Festival, and concluded Be the Cowboy: The Cinema of Ulrich Kohler at the Goethe-Institut on 27 February, programmed in partnership with Deptford Cinema.

While the reign of Rainer Werner Fassbinder, Wim Wenders and Werner Herzog can be tidily traced back to their signing of the 1962 Oberhausen Manifesto, the beginnings of the brightest lights of contemporary German cinema, those of the more modest Berlin School, may be more difficult to define. As well as a shared aesthetic, some of its members had ties to the film magazine Revolver, launched in Munich in 1998, while others graduated from Berlin’s prestigious German Film and Television Academy Berlin (dffb), where they studied filmmaking during the tenure of Hartmut Bitomsky and Harun Farocki.

Not long after the Berlin School’s first wave, which perhaps culminated in the early-00s and films by two DFFB graduates – Christian Petzold’s The State I Am In (2000) and Angela Schanelec’s Passing Summer (2001) – Ulrich Köhler finished his first film, Bungalow. In the two decades since, Köhler has made just four features, a body of work that, though small, is still singular. His films are distinctive in how they double as provocative and plausible thought experiments, four films that each go one conceptual, microsociological step further than the last. Köhler is one of the Berlin School’s most loosely associated members – he studied roughly 250 km removed in Hamburg – and remains one of its more underrated and underrepresented figures. After three back-to-back-to-back premieres at the Berlinale, he broke with tradition in bringing his most recent feature, In My Room, to the Cannes Film Festival last May. 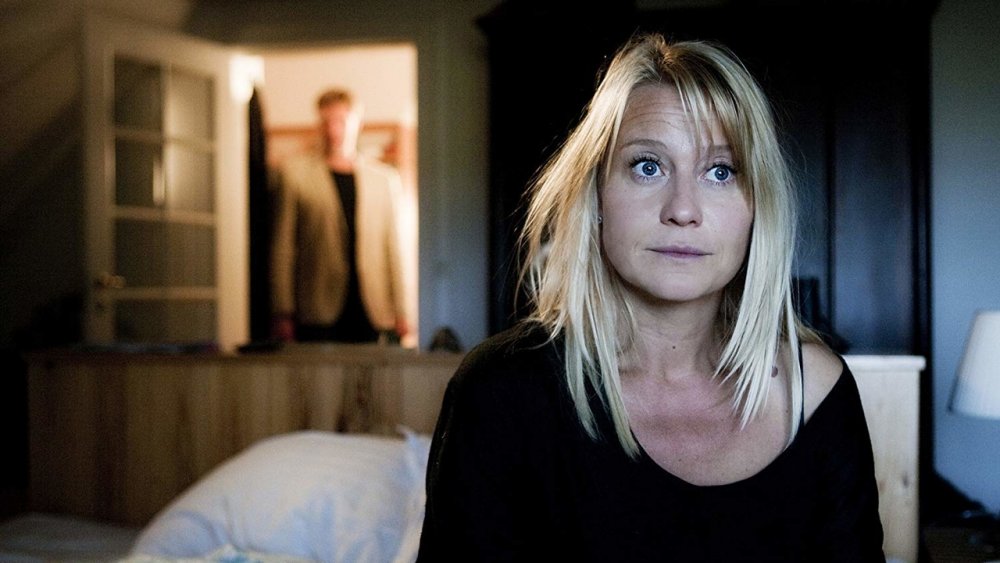 Trine Dyrholm as Lene in Bungalow (2002)

Like those of his compatriot-contemporaries, Köhler’s films have been behavioural studies, crafted in a familiar Berlin School style: both slow-burn and low-key, demonstrating a restraint and resistance to any broad or outward dramatisation. Though not Berlin-based, or even urban dramas, these films still explore ideas of anomie and alienation and, are almost in conversation with one another, with characters all in and out of conflict with their surroundings. Köhler’s films consider a similar, even shared sense of dislocation from a variety of vantages. As a surprising counterpoint to what has come before, In My Room has its protagonist exist eventually in isolation rather than alienation, outside of society rather than on its thresholds.

At Bungalow’s beginning, Köhler’s camera takes its time in finding the film’s protagonist, an adolescent or young adult named Paul, who the viewer glimpses first as just one soldier in a group of many. In parallel with the protagonist’s own thousand-yard stare, it’s a fitting start for a character study that is unusually impersonal, keeping its subject at distance, opaque and unknown to the end. 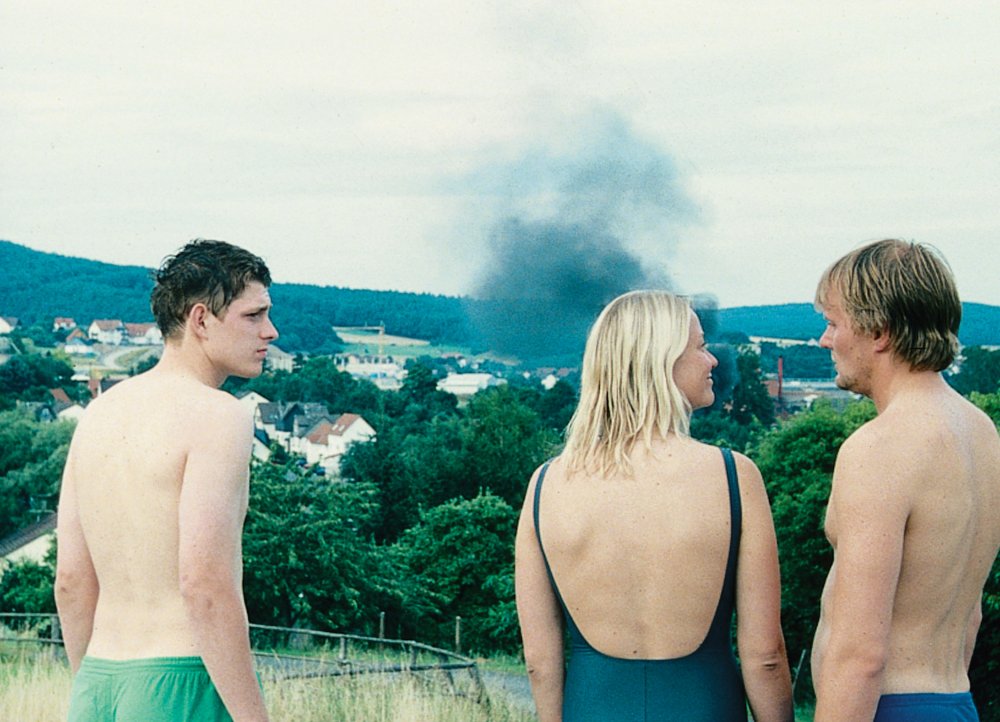 Lennie Burmeister as Paul, Trine Dyrholm as Lene and Devid Striesow as Max in Bungalow

An agent of the state, and absent without leave, Paul makes an increasingly indirect, almost accidental journey back to his family home. With too forceful a kick – perhaps indicative of the amount of time he has spent away – Paul smashes his front door, and when he misses his brief window to flee to a friend in Berlin, he strips out of his uniform to quietly and half-heartedly masturbate in his childhood bedroom. This, the film’s first moment of total privacy, is short-lived. Paul is later joined by brother Max, and Max’s girlfriend Lene, just in time for one to interrupt the plans of the other, initiating a series of passive-aggressive interactions that then encompass the majority of Köhler’s film.

Although Paul grows despondent with longing for Lene, his desire is not romantic, but rather a self-destructive impulse. Bungalow is considerably more complicated than the love triangle it might seem on its surface. Though the film is not exactly The Graduate or Rebel Without a Cause, either, Paul aims to provoke reactions from those around him, pushing at the bounds of what is and isn’t permissible. With time suspended, and his desire for solitude leaving him at this dead-end, Paul finds himself at neither a point of arrival or a point of departure, and Köhler’s film concludes, ambivalently and ingeniously, with an open-ended shrug. 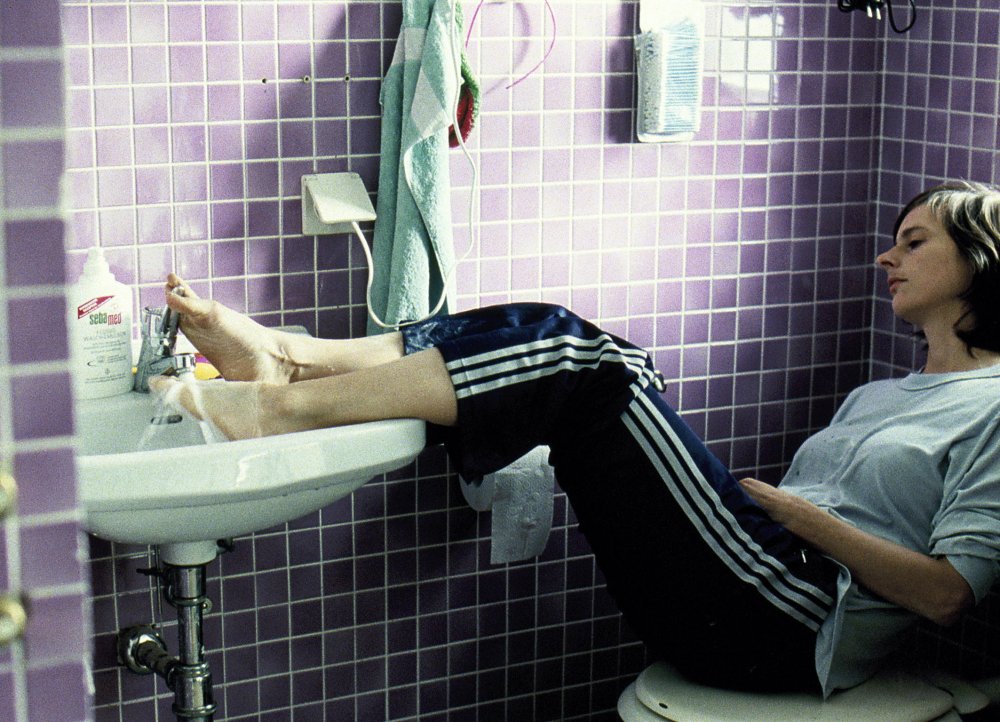 With Bungalow hardly offering resolution, Köhler continues the metaphor at its base in his second feature, Windows on Monday, a similarly bracketed, two-day digression in which an opaque protagonist ambles toward the certain time projected in the future. As if the complementary part of a dyad or diptych, the film inverts the most basic structural scenario of its predecessor. Its central character does not return to what was once a family home but instead, while constructing a family home, balks and walks away from the life she has been creating. Nina, a doctor, schedules two days’ leave from the demands of her profession to finish (with her husband and her daughter) the planned renovations on a new house. After an asthma attack, and the news of a possible pregnancy, she ups and leaves for the wilderness. That this departure goes unannounced is a given, completely demonstrative of Köhler’s style.

As is the case in Bungalow, what happens next seems to come about by accident. In a standout, and a strangely surrealistic sequence, Nina stumbles across a multi-storey Maritim hotel in the middle of the woods, newly renovated and wrapped in a big red bow. Walking and wandering first from its basement upwards to its penthouse, the viewer follows Nina’s voyeurism, with Köhler’s camera poised over her shoulder as she engages in her own form of existential window-shopping. For the viewer, and for the character, there is a temporary thrill to this new life of Nina’s, and though she can fashion a fitted sheet into a dress and eats one of the hotel’s leftover steaks with bare hands for breakfast, this transgressive reprieve is not sustainable. Unlike Paul, Nina does not take the wait-and-see approach. While her aim is uncertain, she is not aimless, and though ultimately unable to control her fate, she shows determination in the decisions she makes. 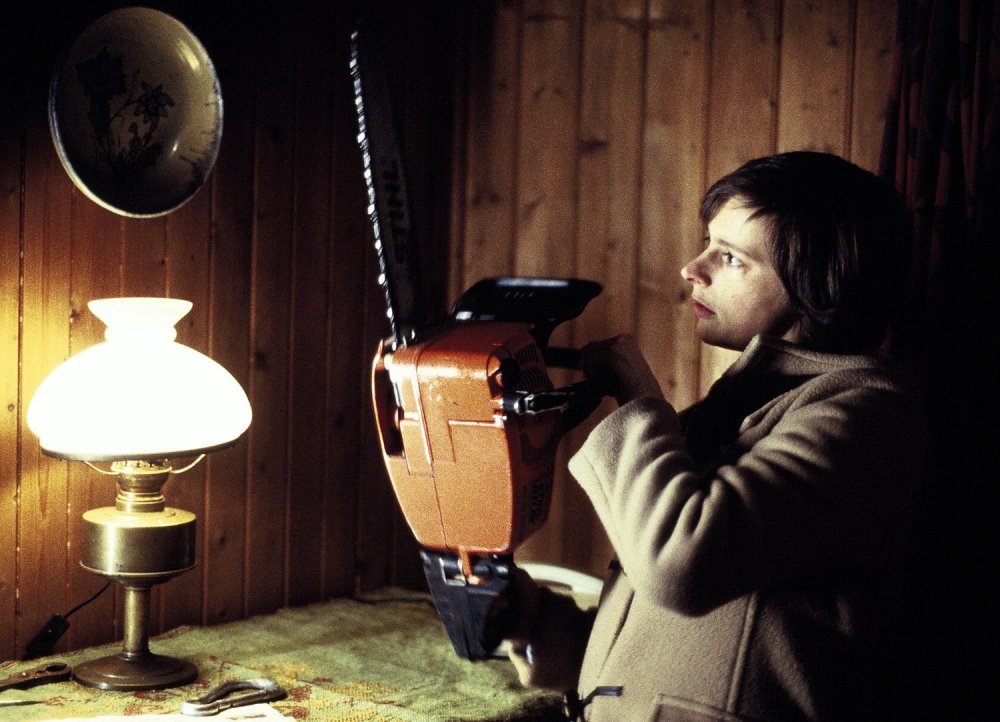 Menke in Windows on Monday

Though subversive and sensitive enough to perceive the limitations of certain social structures, Köhler’s film is, once again, more nihilistic than it is melancholy. As if the withdrawal of its protagonist is reflected in the film’s own unsympathetic approach, Windows on Monday stays numb, never exactly romanticising Nina’s unspoken sadness, never making a leap that might recognise beauty in the depth or even sublimation of her emotion, refusing to end with its protagonist emerging out of their existential crisis with some newfound appreciation of life.

Continuing a career-long critique of bourgeois society is Köhler’s more explicitly political third film Sleeping Sickness, for which he won the Silver Bear for Best Director at the 2011 Berlinale. Produced by Komplizen Films – founded in 1999 and more recently responsible for Valeska Grisebach’s Western and Maren Ade’s Toni Erdmann  – Sleeping Sickness sees Köhler working on a larger scale, its narrative spanning three years and two continents, following yet problematising the filmmaker’s essential earlier template. Typically, the film’s action is slow and almost imperceptible, progressing by degrees. What is unusual is the film’s three-year leap in its middle, an unexpected prolepsis that splits and shares focus between two characters. It’s not that these two men ultimately see one another from each other’s perspectives, but rather that they are seen first separately, and then together.

The two men are both Europeans in Cameroon, Africa, and both doctors working in development. Ebbo decides not to follow his wife and daughter back to Germany, while we never see Alex, sent from the World Health Organisation in Paris, return to his life in France. Though Köhler would not describe the film as political – his polemical essay Why I Don’t Make Political Films was published in Cinema Scope 38 several years prior – Sleeping Sickness still examines the entwined economic relationship between these two continents, albeit from an outsider’s perspective.

Sleeping Sickness is pessimistic about any idea of unification or collective utopia, and there is a movement in its reorientated second part that also signals how Köhler’s latest, In My Room, would make an even greater deviation from the Berlin School’s banal brand of ‘realism’. Venturing furthest into the realm of the hypothetical, In My Room proves at the same time the filmmaker’s most implausible and optimistic offering in spite of its dissatisfied and unhappy Armin – perhaps the most indecisive and least agentive of Köhler’s protagonists. 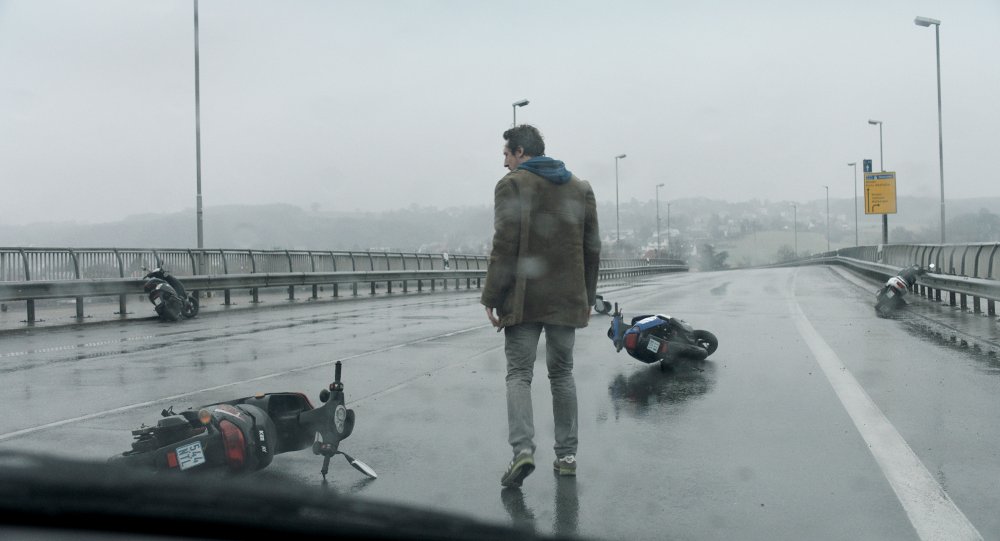 Hans Löw as Armin in In My Room

Inspired by Arno Schmidt’s Schwarze Spiegel (Black Mirrors), Köhler pulls us from ‘Winter’ to ‘Summer’ in a truly remarkable symbolic stratagem and the stuff of speculative science fiction: Armin is now the last man on earth. Fortunately, Köhler’s diversion into desolation in fact produces the exact criteria, conditions and circumstances for the film’s protagonist to thrive. In rendering and then upending every existing structure and system of its initial setting – what is, recognisably, contemporary late-capitalist society – In My Room finds some new synthesis. The before-and-after situation of its protagonist magnificently supersedes that of Bungalow, while Köhler’s newfound storytelling style asserts this Berlin School filmmaker’s singularity.

Related to The cinema of Ulrich Köhler: slow-burn dramas of dislocation