Film of the week: Western faces a cold frontier 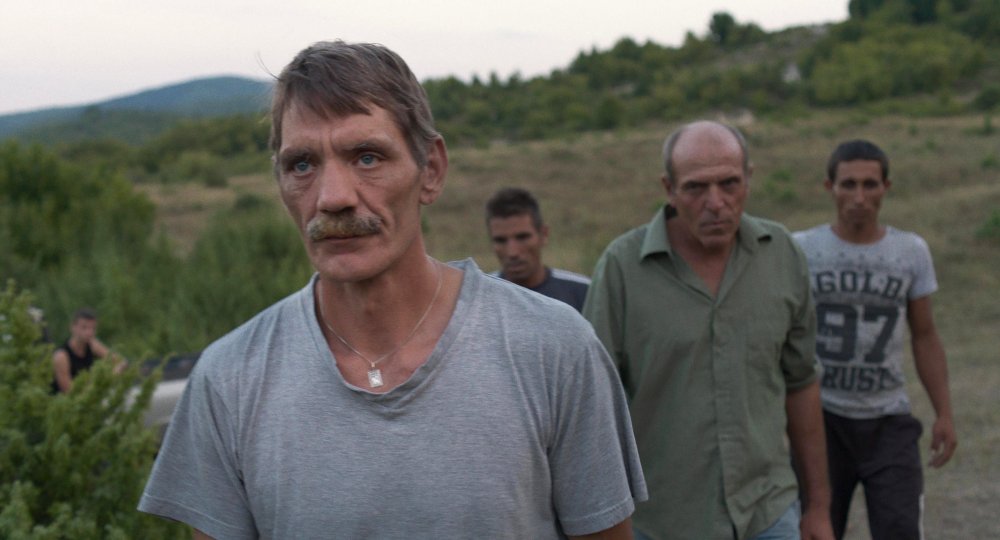 Western, Valeska Grisebach’s third feature, comes 11 years after her deeply moving film Longing sketched the tale of a village firefighter who has an extramarital affair while on a trip, and the agony that follows. Her latest concerns an expedition of German construction workers, tasked with building a hydroelectric plant in a rural part of Bulgaria, near the Greek border. In both, Grisebach’s sights are set on the reticent subjectivities of male characters. Her style falls between Bressonian precision and the Dardennes’ fulsome affect. Western is also allied to Claire Denis’s Beau Travail (1998) and Kelly Reichardt’s Old Joy (2005), which observe the intimacy of all-male spaces. Grisebach too explores the ways men labour, act and interact, their unspoken and brittle bonds.

Meinhard, who possesses a toil-etched face and confident gait, is the film’s taciturn if sympathetic protagonist. When not working, he and the other labourers kill time, drinking, joking, bragging, attempting to deflect ridicule. Bored, in a state of seeking, Meinhard slouches towards the local village, exploring Bulgarian daily customs. His movement between the world of his compatriots and the village portends a quandary of belonging.

The film’s title summons the wide-open expanses of the ur-genre, the Hollywood western, itself a masculine domain. In Grisebach’s hands, the epic scale of the genre – both the mythos of untrammelled frontiers and the violence of settler colonialism – is whittled down to an elusive tension. The film’s dramatic core is relocated to the fault lines of East and West, as deep as the histories of Europe itself, before and after the fall of communism. Colonial encounter is recast in largely economic terms, as infrastructure projects become forms of Western European investment in former socialist states. The German camp is framed as an outpost against the Bulgarian ‘outside’, with the villages, verdant hills and valleys that neighbour the worksite coded as an indeterminate threat. Early on, the workers attach a German flag to their ‘territory’, hearkening to manifest destiny. The flag soon disappears, re-emerging later, a symbol of wounded pride. 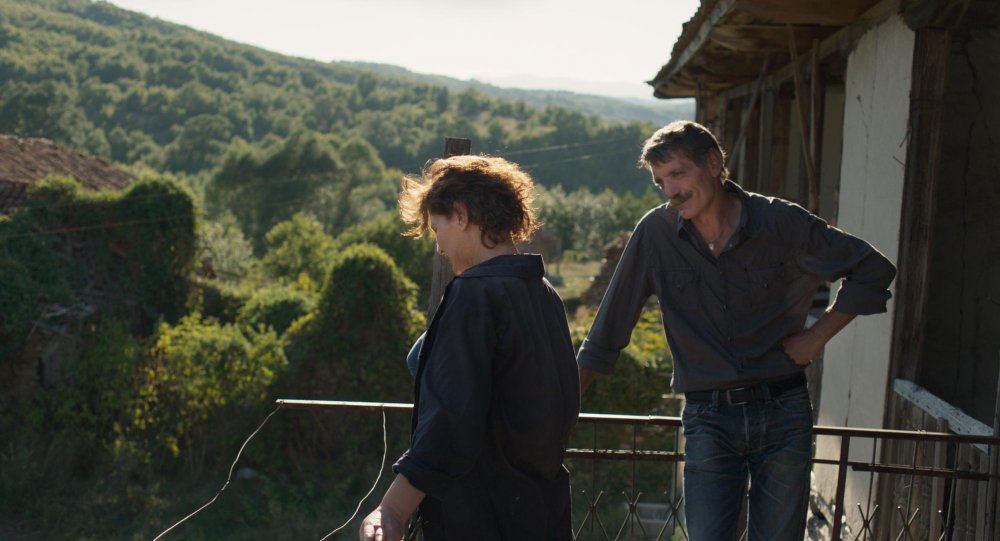 On a Sunday by the river, the German men catch sight of Bulgarian women across the bank. Vincent, the men’s swaggering foreman, catcalls and harasses a bathing Vyara, dunking her head under the water, absconding with her hat. This disrespect leads to simmering hostility between work camp and locals. Meinhard keeps his distance, acting as a go-between, his cool diffidence among his own a cover for other forms of yearning. Seemingly minor incidents – the lost flag, a white horse, a cigarette denied, the gift of a knife – reverberate as the film progresses.

Western is embedded in the rituals, postures and habits of the everyday, and constituted by small gestures and transitory moments of contact. Meinhard the initiate is taught to thread and dry tobacco leaves, cut stone, fashion a bridle from rope, build a retaining wall, as well as decidedly more ineffable things. “Every stone has its place,” quarry owner Adrian tells him, explaining how the rock used to build the wall is also named ‘face’. A film of obdurate faces, human and non-human, obliges a careful, pausing gaze. 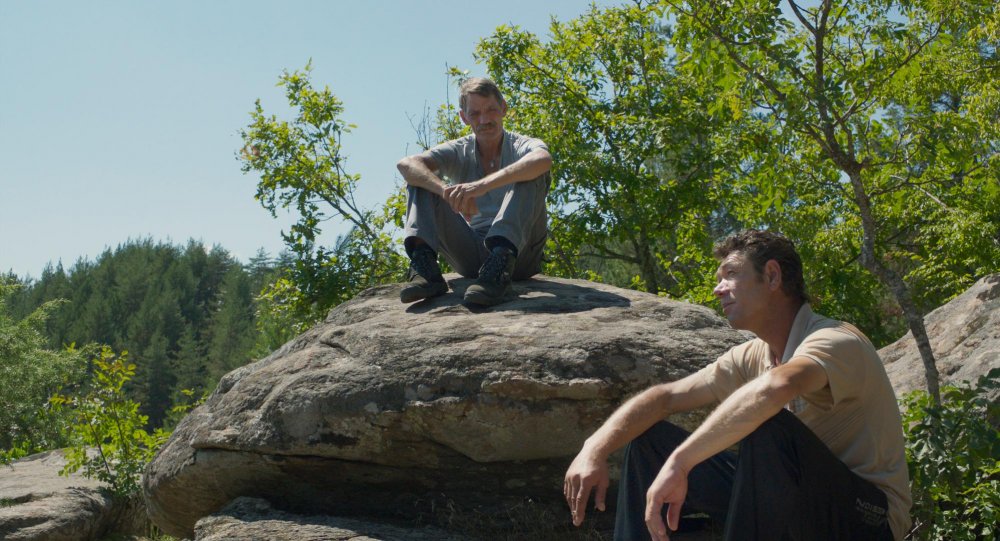 An uneasiness accompanies Meinhard’s interloping in the world of the Bulgarians, one that derives from his murky intentions – his own stone face – and whether his gestures will be understood. Hitching a ride with villagers, he tells them, perhaps to curry favour, that he is a soldier, a Foreign Legionnaire (one of several echoes of Denis’s film). They pantomime shooting a gun, asking if he has killed many men. Meinhard quietly implies that he has. As he befriends Adrian, he is dubbed ‘the bodyguard’.

Yet the chasm between cultures, and between relative economic prosperity and underdevelopment, serves as the stage for prevarication, male puffery, self-delusion. In an evening poker game, the villagers note to each other that Meinhard has little to lose because he is getting a good salary. Meinhard ungraciously wins the table. Germany, which occupied Bulgaria in World War II, remains a presence in the Bulgarian imagination. Seeking cigarettes, Meinhard is regaled with an old man’s story about the “orderly and neat” visiting German soldiers. The lingering romance with authoritarianism, the idealisation of brute force and ‘might makes right’, underpins the shows of masculine boast and bluster, lingua franca of male bonding.

In encounters between strangers, tales, embellished or not, must be told. Language is a vessel of uneven communication, its crossed wires augmented by gestures, pantomimes. Through subtitling we see what the characters are saying, but it is evident that what they understand of each other is limited. Countenances and feelings remain. Bulgarian words are acted out for Meinhard, and he slowly comes to use them – water, face, world, nothing. When Adrian talks of svoboda – freedom – or when Meinhard speaks mournfully of a dead brother and Adrian replies, “I am your brat [brother],” the film veers towards plaintive irony. Meinhard’s solitariness, his svoboda, is alternately enviable, ominous, tragic. Asked “What is it that you are searching for here?” Meinhard can neither comprehend nor answer. The time bomb, that opaque thicket of male emotion, lies within. 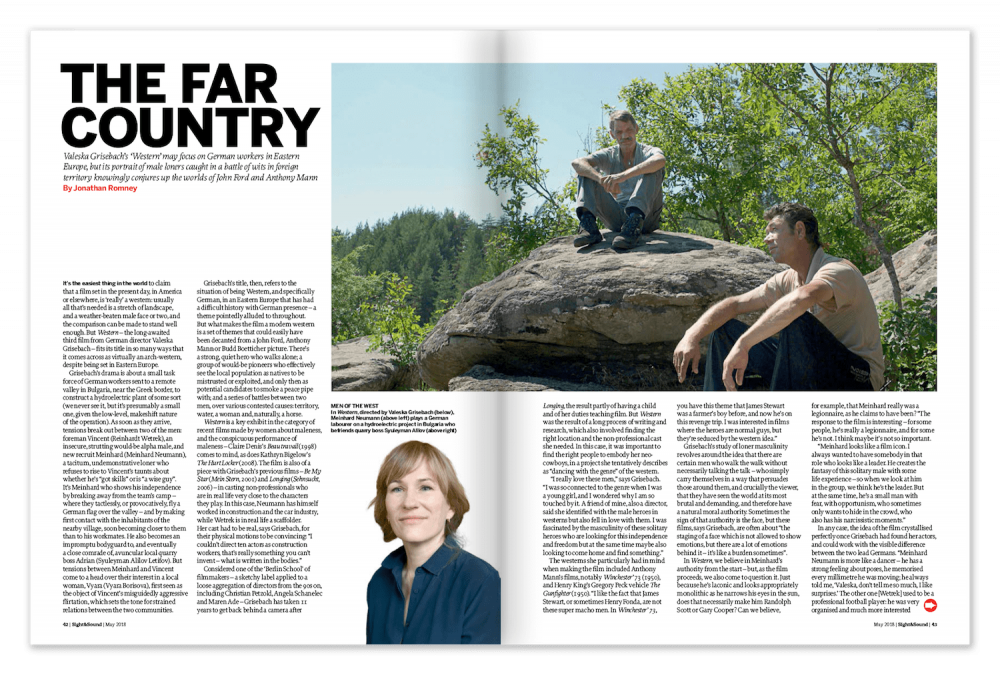 Valeska Grisebach’s Western may focus on German workers in Eastern Europe, but its portrait of male loners caught in a battle of wits in foreign territory knowingly conjures up the worlds of John Ford and Anthony Mann. By Jonathan Romney.

Related to Film of the week: Western faces a cold frontier