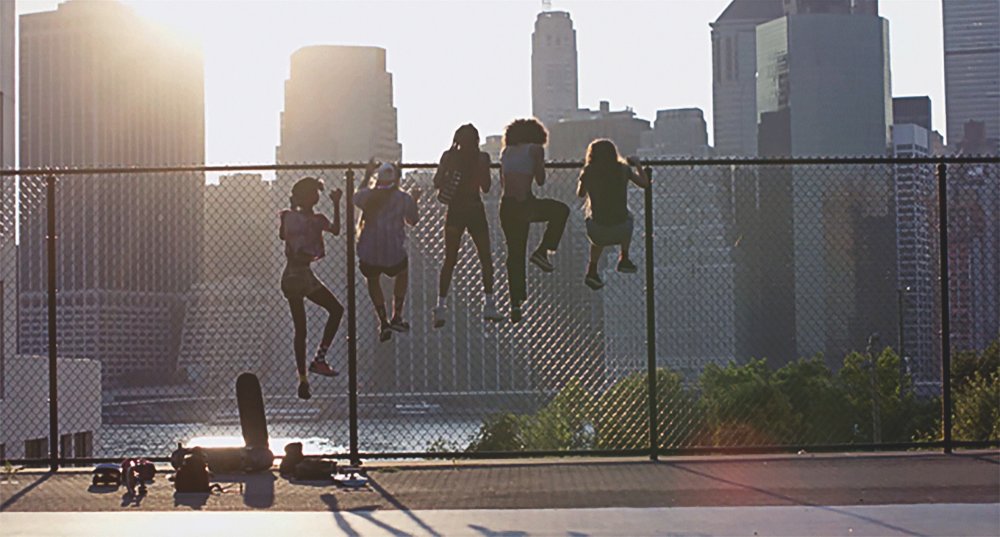 Skate Kitchen simultaneously embraces and censures the world of skateboarding. As much as it highlights the elegance of skateboarders on screen, its coming-of-age story is an open critique of contemporary skate culture.

Skate Kitchen is on a regional preview tour of the UK before its release on 28 September 2018.

Mid90s and Minding the Gap are likely to be released in 2019.

Though skateboarding is deservedly praised for channelling activist youth cultures and human rights movements, a haughtily conservative spectre also moves through it. Recently founded queer collectives such as Doyenne, Skateism and Unity are tackling some of its most pressing issues, yet the repercussions of transphobia, racism, bigotry and censorship remain staggering. Cinema might make itself an ally in this fight.

This year brings three socio-political films on skateboarding. Bing Liu’s documentary Minding the Gap bridges the overlooked chasm between skating and family life (including domestic violence and teenage pregnancy); Jonah Hill’s directorial debut Mid90s challenges the often nostalgic outlook on Southern California as the birthplace of skate culture; and Crystal Moselle’s Skate Kitchen works towards a more inclusive environment for women and people of colour in skateboarding. The films may be timely in their thematic approach, but what exactly has the world of skateboarding to offer to cinema? 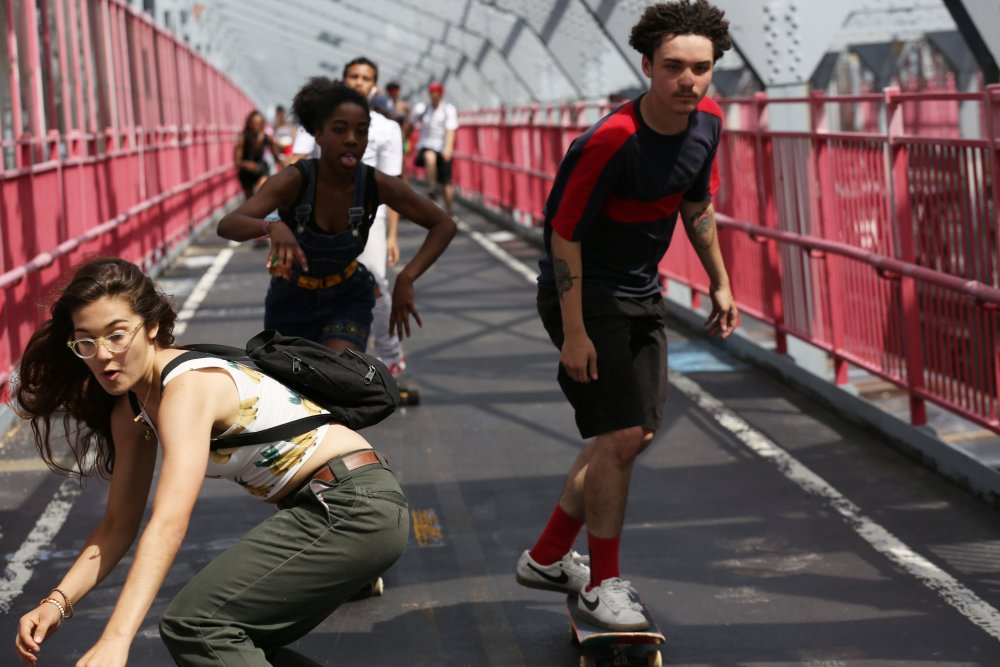 Skate Kitchen opens with a modernist soundscape, if only to reassure skateboarders that this is a legitimate representation of their culture. From the screeching of polyurethane wheels on asphalt to the tapping of aluminium alloy trucks on polished granite ledges, the film embraces the instantaneously recognisable sonic traces of skateboarders. It’s attuned to the sensory density of skating – a rarity in cinema.

Compare with Lords of Dogtown (2005): Stacy Peralta’s celebration of his own legendary SoCal skate crew the Z-Boys at times feels like a compilation of polished music videos from the 1970s (Nazareth, Deep Purple, Black Sabbath), rather than cherishing the sonic quality of skateboarding. The same goes for other skate classics in fiction film, including Thrashin’ (1986), Grind (2003) and even Gus Van Sant’s Paranoid Park (2007).

Skate Kitchen hits the right tone, and might offer one of the richest soundscapes in contemporary cinema. Its warm colour scheme and narrow depth of field likewise advance a visual texture that is unlike most skater-made videos. Where conventional videos move hastily from trick to trick and place to place, Skate Kitchen takes its time to approximate skateboarding’s everyday lived experience. No fisheye lenses or accelerated montage techniques here; instead, the film celebrates the execution of delicate routines and stylised rituals via long shots and gentle camera movements. 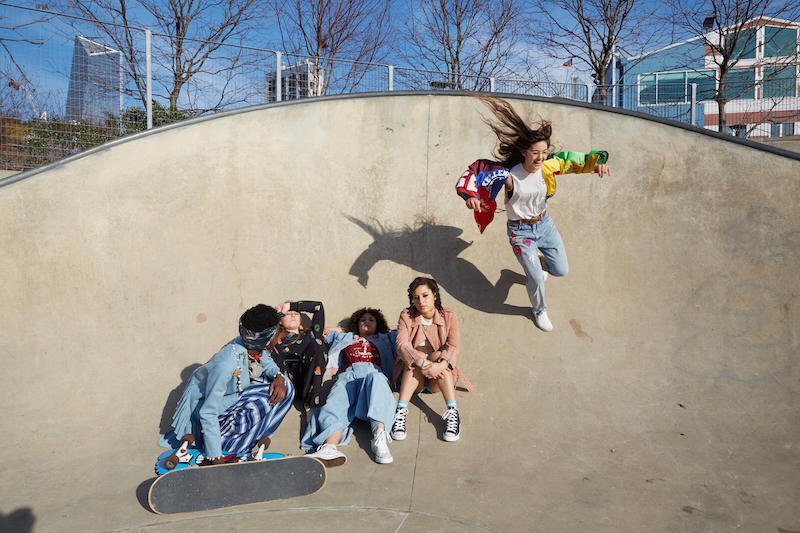 But Skate Kitchen doesn’t shy away from addressing the discomfort, exclusivity and inequality that go hand in hand with some of these refined yet standardised rites of passage. It’s all about how you carry yourself, or so Moselle seems to suggest – from the way you hold your board to where and with whom you skate. And, sadly, gender and ethnicity are still defining factors in this normative framework. So for better or worse, the film presents skateboarding as a subculture, with its own rules and regulations. But it does so from a more inclusive viewpoint so as to explicitly question such norms.

Skate Kitchen chronicles a couple of months in the life of Camille (Rachelle Vinberg), a teenager from suburban Long Island who is in awe of a New York City skate crew called The Skate Kitchen. Despite her mother (Elizabeth Rodriguez) insisting she quit skateboarding after a potentially harmful injury, she decides to travel to LES Coleman, a recently rebuilt popular skatepark in the Lower East Side of Manhattan.

Then, a few close-ups of young (shirtless) men, skateboards, stairs and rails. Coleman skatepark breaths a completely different atmosphere from Camille’s hometown, which feels empty and desolate compared to Coleman’s ebb and flow of sharp sounds, rapid movements and sweaty bodies. What is amplified here is a noisy city in motion.

Initially, Camille seems to be the only woman at Coleman. She undergoes a couple of spoken and unspoken intimidations by local male skaters, as is hardly uncommon in skateboarding. Then, two young skateboarders approach her – whom she recognises as riders of the all-women Skate Kitchen collective. The gaze is returned: “You look familiar. I follow you on Instagram, bro… she’s mad good.” It’s the starting point of a caring friendship – framed by the anticipation of a majestic skate life in New York City. 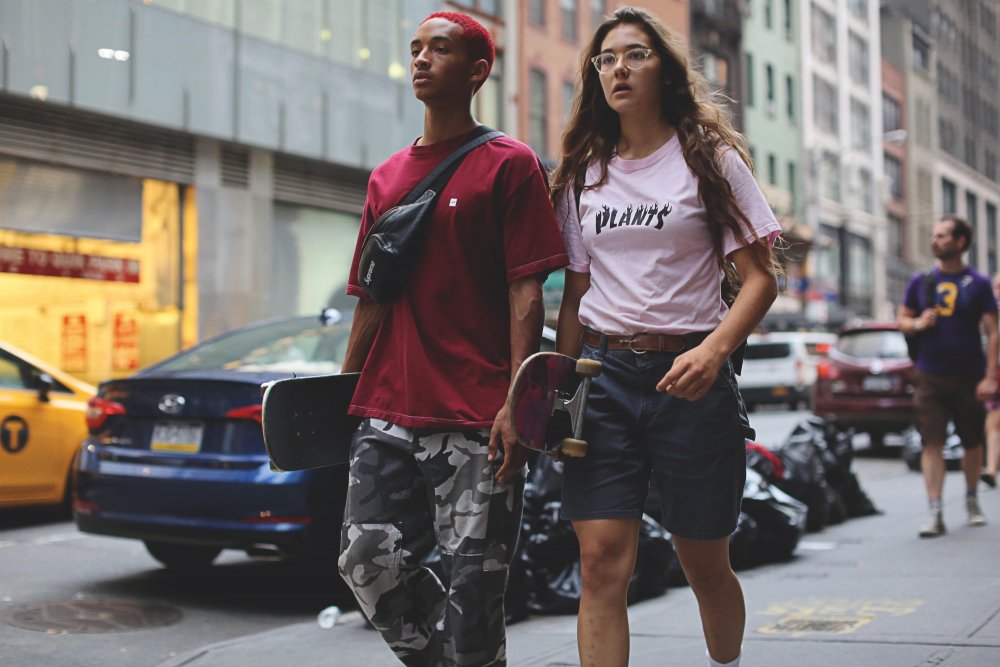 In the city of dreams, the collective – which is in part based on the real, eponymous skate group – indubitably faces male gazes, not to mention blatant sexism and latent homophobia. But this takes place in a social and urban context that is a tad more progressive than Camille’s hometown. In fact, the Skate Kitchen crew encourages her to overcome structural barriers and taboos. In New York City, there’s room to explore her sexuality and identity; here, the ‘provincial’ norms of her oppressive mother and absent father don’t apply. Camille soon feels as though she can skate whenever she wants, with whomever she likes, in whatever environment she pleases.

Within a couple of skate sessions, Camille weathers her timidity and notices how much she enjoys skating the empty streets of a city at night alongside her allies, rivalling a male crew. These nocturnal sequences are some of the film’s most striking: the confidence with which the Skate Kitchen crew explores New York’s architectural landscape resonates with a mundane yet ecstatic experience of everyday skateboarding. As Kyle Beachy writes in his poetics of skateboarding, “A source of joy for me is to push down this boulevard and pop tiny ollies over these sewer caps, sometimes barely scraping my tail, other times popping hard and pulling my knees up to my chest. These are not tricks proper, just ways to see and engage with the street’s reality… this pushing down the boulevard, the single most fun I have in any given day, is not a scorable act of skateboarding. It is worth zero and it is worth everything.”

It’s uncommon for a fiction film to portray skateboarding in such an undiluted and thus slow-paced fashion. Skate Kitchen hardly focuses on big tricks that seem beyond human ability, nor does it echo Thrasher’s infamous mantra ‘skate and destroy’. Instead, the film chronicles the lives of six talented souls who are paving a way for themselves (as women, as people of colour, as skateboarders) in an environment that by and large fosters a boys’ club mentality. Sometimes, angles are twisted and hearts broken. At others, the crew’s feminist stance costs them dearly.

But above all, the film presents (fictionalised) allies in recognising and supporting a broader gendered and ethnic landscape in skateboarding. In an era of burning Nike shirts, this is a big deal. 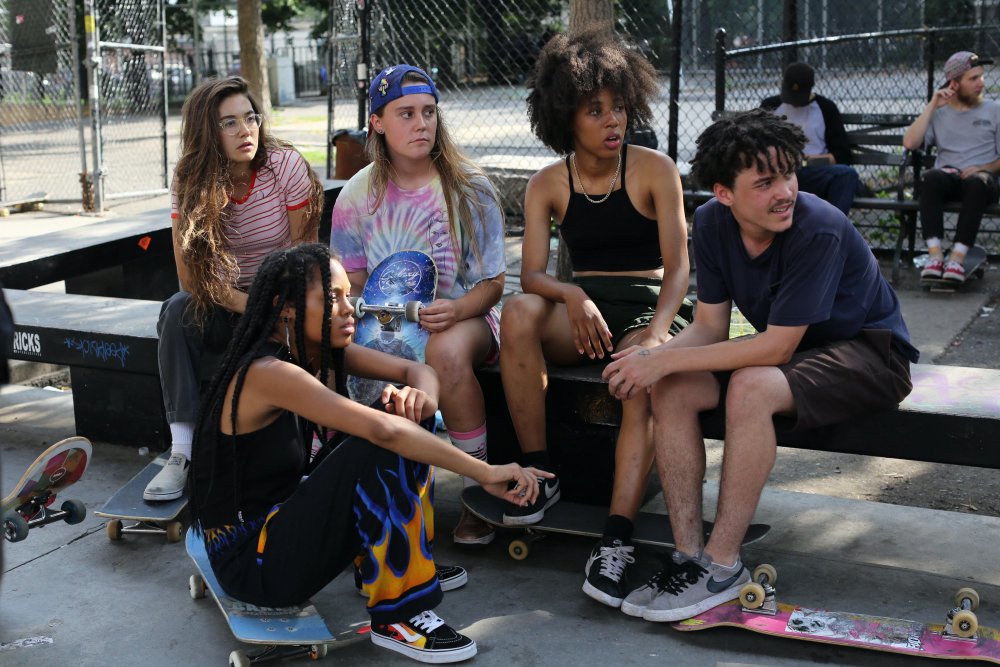 In fact, skateboarding seems to operate as an emancipatory catalyst for those involved in both the fictional and nonfictional version of the collective – who, in turn, hope to inspire those who face similar challenges outside of cinema. With Skate Kitchen, Crystal Moselle dares to propose an activist form of filmmaking, introducing a new wave of inclusive skate initiatives to cinema. As Jules Lorenzo, one of the collective’s skateboarders, says in an interview for Fashionista: “The Skate Kitchen is important to me because many of the girls in our crew, including myself, are people of color. We’re able to show that girls of every color do exist within the skating world, whether they’re mixed, Latina, black, Asian, etc.”

Skate Kitchen does so by testing the parameters of filmmaking. It’s not entirely a documentation of skate culture, yet the majority of the film’s cast are skilled skaters with hardly any acting experience. This vérité-like approach renders Skate Kitchen daring and timely. By stretching the limits of fiction film, Moselle challenges the conventions of coming-of-age stories, whilst proposing an alternative to skateboarding as a homogenous, masculine subculture.

If anything, then, Skate Kitchen works towards a diverse spectrum of skateboardings. This is exceptional within the skate world, let alone cinema. Over the past couple of decades, cinema has fetishised skateboarding as a masculine and turbulent counterculture. Skate Kitchen calls out the toxic consequences of such an approach, echoing recent progressive movements within skate culture. But above all, it’s a tale of mild optimism: skateboarding is slowly changing for the better, and perhaps cinema can, too.

Related to Skate and awake: how Skate Kitchen confronts skateboarding’s wall of machismo