Film of the week: The Wolfpack

Six caged Mowglis raised by the movies come good in this buoyant snapshot of postmodern quarantine and breakout. 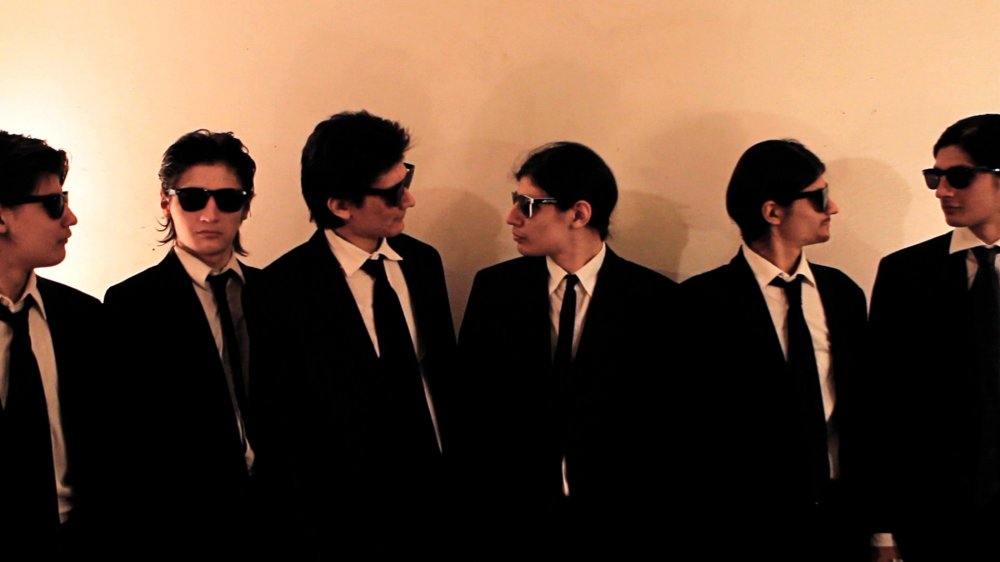 Documentaries are a curious animal – they are naturally as subject as any other cinema to filmmaking personality and perspective, but at the same time their frisson and power are nearly always contingent upon their raw ingredients. The genre is, after all, a matter of witness, and sometimes just showing up with a camera at the right place, and rubbernecking with a little panache, is most of what’s required. Nearly anyone with a camera, you could argue, might make a remarkable film out of Resistance veterans, or Werner Herzog in the jungle, or Holocaust survivors, or what have you. If there is an auctorial force at work, it’s frequently in the form of the friendship, dedication and self-sacrifice demonstrated by the filmmaker off screen; often, a doc can, and must, be weighed as a craft of relationships, like espionage, with most of the real work done in private.

Certainly, the heart of Crystal Moselle’s The Wolfpack is a freakishly remarkable thing – a family of six young brothers, products of a Peruvian father and a Midwestern mother, who grew up almost entirely sequestered in their cluttered Lower East Side apartment, hidden from the world. There’s no reaching the bottom of our fascination with the ‘feral child’ archetype whenever it appears – from Kaspar Hauser in the early 19th century to Samira Makhmalbaf’s The Apple – in regards to both the end result of such abuse/neglect (particularly in popular myth, when a child is ‘raised’ by wild animals) and the unfathomable abuse itself. But Moselle’s film is a modern – even postmodern – take on the paradigm: the six Angulo brothers are not feral, just home-schooled, sheltered from reality, heavily bonded as siblings and absurdly saturated in Hollywood movies, videos of which flowed into their home in a ceaseless stream. 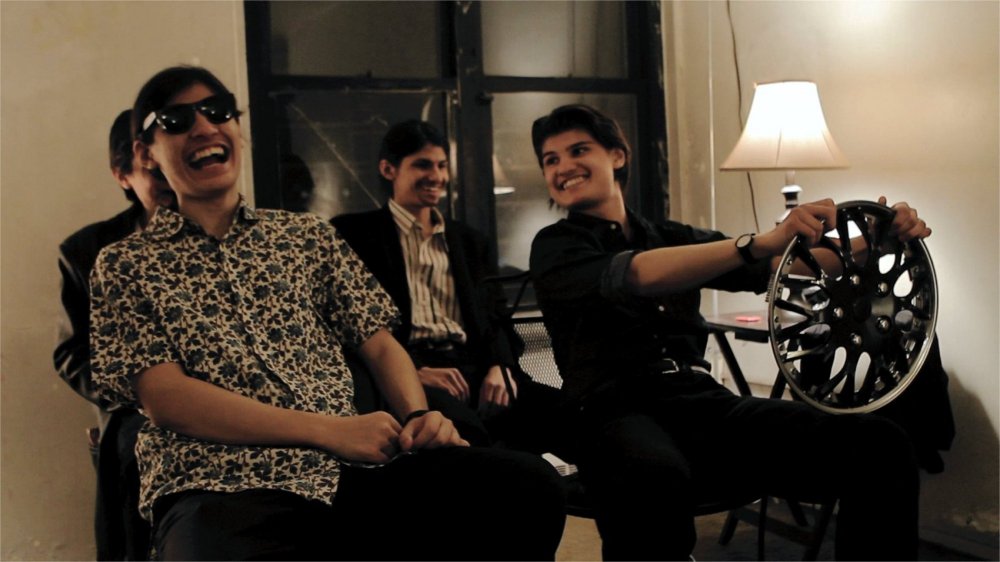 They’re also fabulously charming, with big relaxed smiles, serene dispositions and a zest for performance that puts them perfectly at ease in front of this stranger’s camera. (The eldest, and seventh, sibling, a daughter with learning disabilities, is barely glimpsed.)

Their plight is purely the father’s engineering. Nominally a Hare Krishna follower and apparently some kind of monomaniac, Oscar Angulo wooed the pliant mother, Susanne, at Machu Picchu, and insisted that their subsequent children grow their hair waist-length and be given ancient Sanskrit names (Bhagavan, Govinda, Narayana, Mukunda, Krsna, Jagadisa and Visnu). Defensive, autocratic and bitter about modernity, Oscar decided that his children would have no intercourse with the world, and was the sole guardian of the apartment’s key. The man’s epic antipathy towards civilisation extends to his own habits – he considers work to be beneath him, and so the family and their rent-controlled home are sustained solely by the municipal grants the city of New York send Susanne to support her home-schooling. Oscar eventually grants Moselle a few uncommunicative sit-downs, but the very fact of her presence is a thorn in his side with which he wearily struggles to make peace. 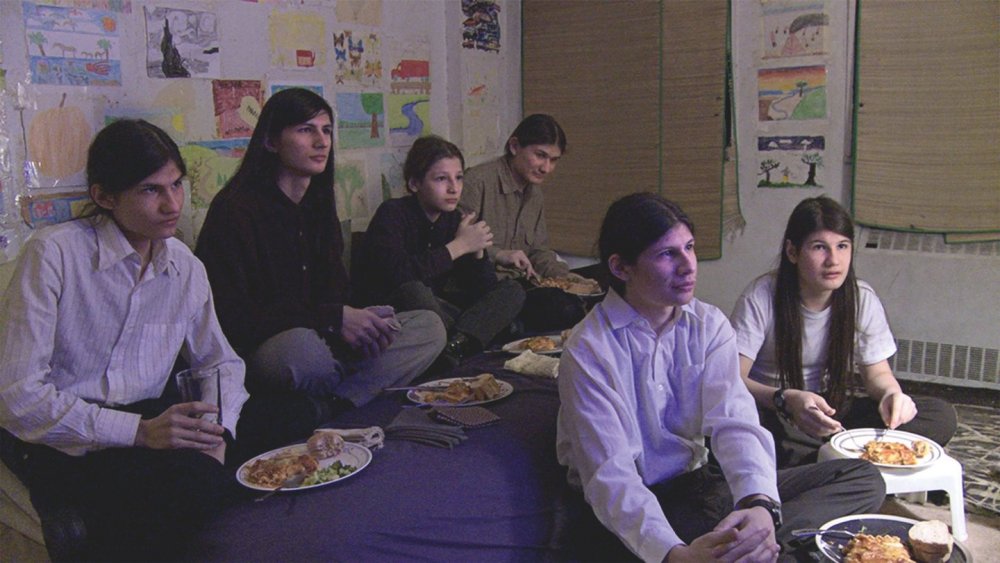 The Angulo brood, with their six sets of matching black warrior hair, first caught Moselle’s eye during one of their rare visits to the sidewalk; filming thereafter took nearly five years. (Unfortunately, Moselle doesn’t attempt to clarify for us the passing of time, or even to distinguish one brother from another.) However surprising her intimate access to the family is, given the decades of hermetic isolation that preceded it, her interloping makes perfect sense – the years of filming correspond with five of the six brothers entering into, struggling with or emerging from adolescence, and the bell-jar existence the family was leading was destined to shatter. The filmmaker’s presence had to help, but the boys themselves began breaking the mould – the pivotal moment, off screen, was when one of them exited the house without permission wearing a Michael Myers Halloween mask (the anonymity seemed like a good idea) and promptly got arrested, exposing the Angulos to municipal daylight and all manner of (sketchily outlined) bureaucratic interference.

Another peaking crisis, unfilmed but described by the brothers in hushed tones, was when a Swat team raided the house with a search warrant, looking for illegal weapons. But the police, after handcuffing everyone, found only the elaborate mock movie guns the brothers had lovingly crafted out of cardboard and duct tape – a perhaps fitting capper to the brothers’ compulsive and passionate relationship with films, which they would transcribe into scripts and then, in full handmade regalia, re-enact. 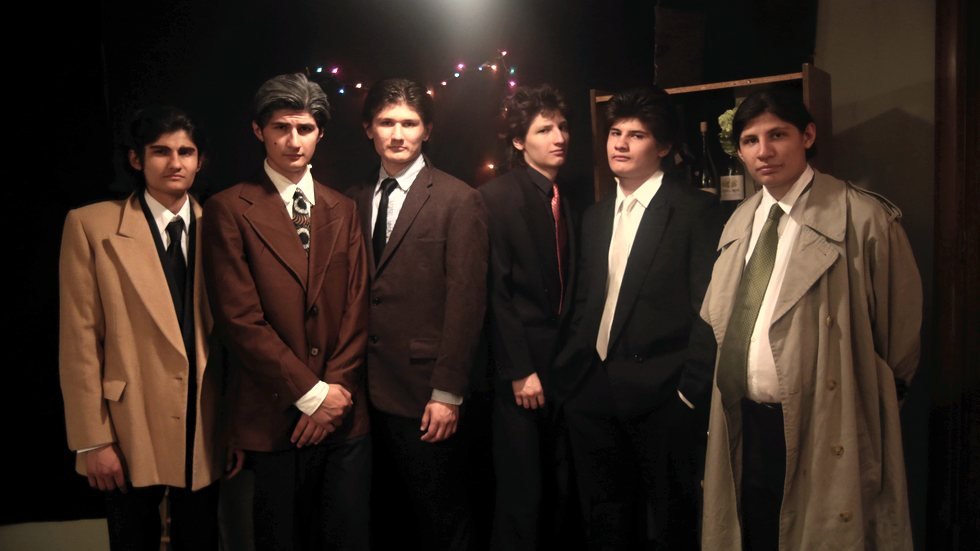 Moselle captures a handful of these movie remakes, and it’s a shame there aren’t more. At times The Wolfpack plunges into the movies-as-play dynamic of Zachary Oberzan’s sublime Flooding with Love for the Kid (2007), in which the novel First Blood is recreated in a small Manhattan apartment with the director in every role, resembling nothing so much as a little kid scrambling across the floor acting out a tear-ass action-melodrama that’s really only in his head. (Godard pioneered this childlike, stripped-down self-consciousness in his 1960s films.) Running up and down their hallway brandishing fake pistols, the Angulos are whole-hog cinephiles and cineastes and merry children all at once, living and breathing the let’s-pretend essence of the medium.

Moselle very occasionally edges as well towards the genre-morphing films-within-the-film of Joshua Oppenheimer’s The Act of Killing (2012), capturing the Angulo sextet hitting the streets together in suits and sunglasses à la Reservoir Dogs, or filming one brother in his elaborate Batman suit brooding by the window in a moment right out of The Dark Knight (2008). (The Angulo patriarch wanted to shield his children from the horrors of the outside world, but obviously never thought twice about the films he brought them.)

Alas, it’s underexplored terrain. The film remains a testament to movie love, and how acculturated, against all odds, you could become on a steady diet of Hollywood product. But in contrast to, say, Makhmalbaf’s semi-fictional sleight of hand, Moselle largely misses the opportunity to see the Angulos’ strange life through the looking glass of movies – to view their chilling society-deprivation experiment, and her exploration of it, as another form of cinema, as tainted by rampant movie-watching and recreating as Tarantino and Burton (and Godard), but lost in the funhouse without the solvent of irony. 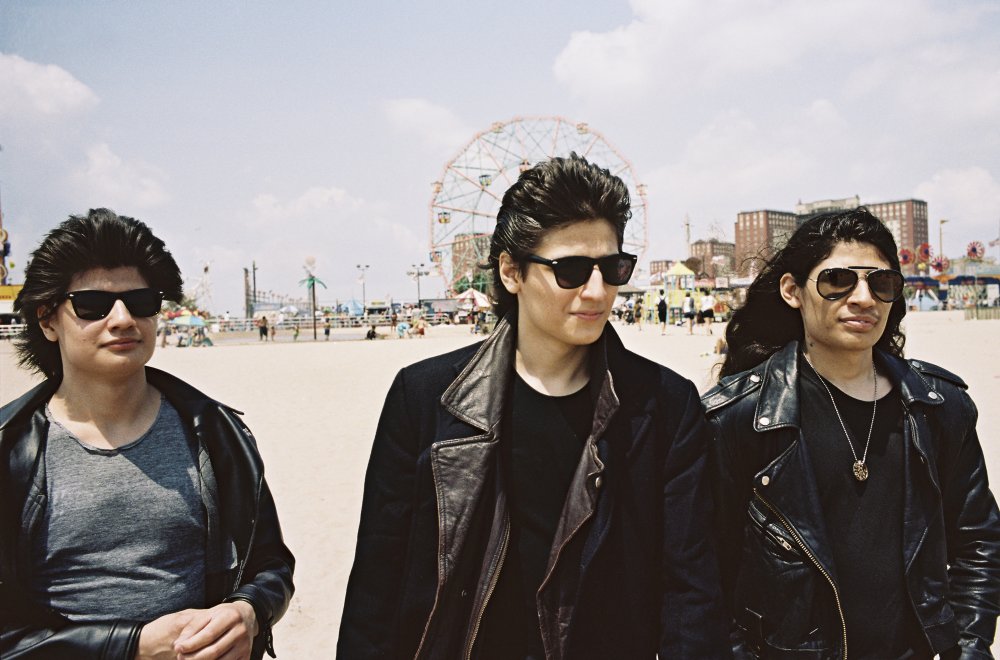 Instead, Moselle seeks to normalise the boys, and The Wolfpack climaxes with a kind of earnest Hollywood ending, as the various brothers begin to break out of the cocoon, get jobs, meet people and tentatively enter the social whorl. (She takes them to their first movie theatre – to see The Fighter – as well their first public beach.)

We may well guiltily resist her efforts – the Angulos’ developmental Otherness, terribly odd to us and yet immersed in the pop culture we all know just as well, is the film’s primary allure. At the same time, the poignancy of what’s undeniably on hand here – the bros’ unspoken tribal cohesion, and the way their captivity pressurised and metastasised their creativity – is also fading, as they disperse and grow up. Things change, alas.

Related to Film of the week: The Wolfpack