Looping around limitations: the experimental shorts of Tezuka Osamu

As the British Museum celebrates manga in a blockbuster exhibition, we take a look at some of the most intriguing and low-key work by the man who invented Astro Boy. 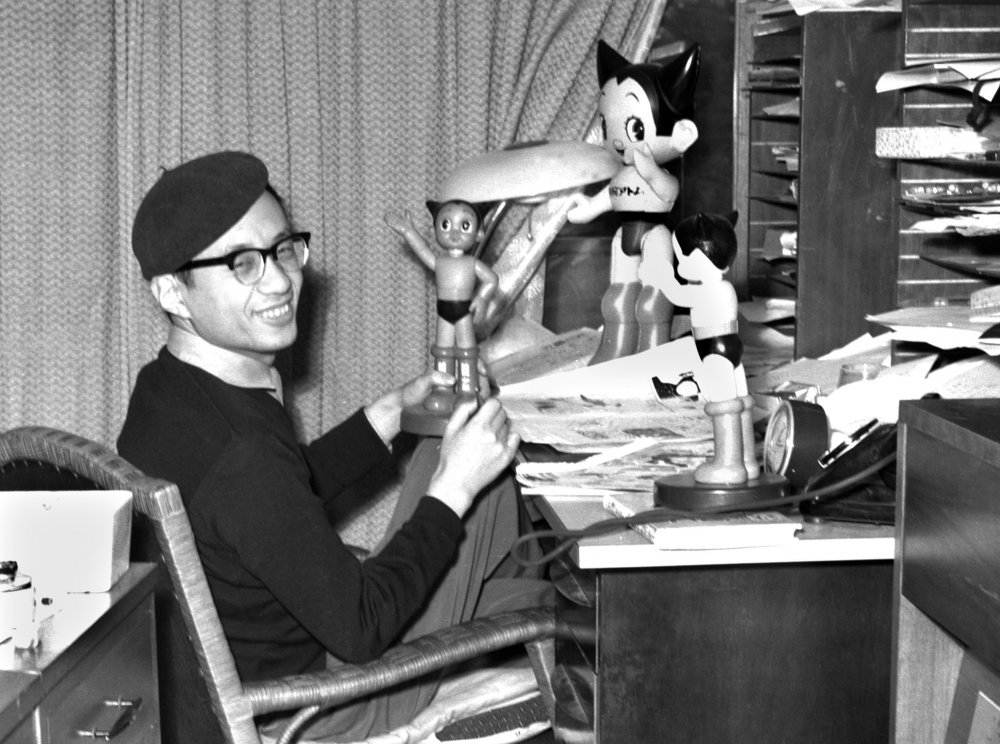 Tezuka Osamu at play with his Astro Boy puppets

Tezuka Osamu made 13 experimental animated shorts in his swift, blazing career. That he found time to produce them at all is remarkable. Churning out 700-odd volumes of comics would have kept a lesser artist busy, but Tezuka, not content with dominating the postwar manga world, set about kickstarting Japan’s TV animation industry too. The business model he pitched to wary broadcasters was founded on a pioneering approach known as ‘limited animation’. Through such techniques as recycling drawings and cutting the number of original frames per second, his studio Mushi Production was able to keep budgets comparable to those for live action.

Manga runs at the British Museum until 26 August 2019. Helen McCarthy will lecture on The art of Osamu Tezuka: god of manga at the Museum on 11 July.

The premiere of the series Astro Boy in 1963 brought the fruits of this approach to the Japanese public, and set the aesthetic blueprint for modern anime. What audiences didn’t know is that Tezuka had already explored these techniques in Tales of a Street Corner (1962), his first experimental short. It shows the denizens of a Parisian-style backstreet – including a wall of posters that come to life – trying to go about their modest lives under the yoke of a military dictatorship. As well as flaunting Tezuka’s ever-present pacifism, the film displays his limited animation at its crudest: the characters move jerkily and the storylines loop redundantly. The film doesn’t fill its 39-minute runtime.

Tezuka learned to distract from these limitations with bold designs and witty scripts, or even to integrate them into the narrative. In Mermaid (1964), another cautionary tale about the perils of totalitarianism, a dissident is repeatedly tortured until he toes the line. He is shown writhing on the floor in an animation cycle that’s repeated over and over, underscoring the crushing monotony of torture – and saving Tezuka’s team some work. Taking after Modest Mussorgsky’s piano suite, Pictures at an Exhibition (1966) strings together ten satirical vignettes, one of which portrays an ascetic monk who continues to meditate as storms rage around him. The joke is that, even when we expect him to move, he remains inanimate.

Muramasa (1987), Tezuka’s most radically minimalist short, almost dispenses with animation altogether. The film takes its cue from a Japanese legend about a cursed sword that inspires bloodlust in the bearer. The story is mostly told in still images, with isolated elements sometimes highlighted through motion: a glowering eye here, a quivering blade there. Dynamic compositions and lurid colours supply much of the narrative energy, and some of the static frames burst with suspense. The impression is of a filmed storyboard – or manga.

The film stands out in another way, too. With its shakuhachi score and folkloric subject matter, it’s an overtly Japanese work; all Tezuka’s other shorts bear the imprint of Western graphic arts. They embody a quality he called ‘denationalisation’: a geographical non-specificity found also in his series, which made them easier to export and thus set a precedent for anime. The scarcity of dialogue in his shorts, and their broad humanist message, only bolster their universal appeal.

Tezuka made much of his admiration for Disney – his writings almost present his manga career as a stepping stone to the ultimate goal of emulating Uncle Walt. Fantasia (1940) is clearly the model for Pictures at an Exhibition as well as the unfinished Legend of the Forest (1987), which was conceived as a four-part anthology film set to Tchaikovsky’s Symphony No. 4. Adapting one of his own manga, Tezuka spins a didactic yarn about man’s despoliation of an idyllic woodland. One of the two completed episodes ends with a scene that inverts the dynamic in Bambi (1942): as a lumberjack hacks away at a camphor tree, a vengeful flying squirrel starts a fire that kills him.

More interesting is the film’s playful self-reflexivity. As it introduces the forest’s inhabitants, the opening scene progresses through a rapid-fire sequence of visual styles, each of which pays homage to a pioneer of animation. Tezuka effortlessly pastiches Emile Cohl’s chalk lines, Winsor McCay’s rocking motions, the Fleischer Studios’ flamboyant caricatures, and of course Disney. Significantly, he only references Western artists.

If Tezuka’s 1960s shorts sought to make a virtue of their crudeness, the ones he directed in the 1980s (after a long hiatus) often embraced ‘fuller’ animation, exhibiting fluid movement and formal sophistication. Like the opening of Legend, Broken Down Film (1985) is about its very medium: a Fleischeresque cowboy’s attempts to save a damsel in distress are complicated when the film stock itself purportedly disintegrates, interrupting the action and baffling the characters. Its anarchic silliness makes it a cousin of Chuck Jones’s Duck Amuck (1951).

At their worst, Tezuka’s works are either glib or moralistic. His finest short, Jumping (1984), avoids both these vices, and remains a striking demonstration of what animation can uniquely do. We adopt the viewpoint of a child who can jump very far, and uses this skill to hopscotch between ever more dismal corners of the world. The transitional moments of flight are deftly animated (without CGI or rotoscoping); they also eliminate the need for cuts. Through the continuity of the action, Jumping asks us to consider the progression from industrialisation to militarisation to annihilation. It’s a remarkable film: slick, innovative and rich in subtext.

Even as Tezuka was deified as a creator of manga and television series, his shorts remained largely unseen. This may not always have bothered the man. As scholars have noted, pioneering films such as Street Corner generated a buzz that reached far beyond their audience; they were probably intended above all to spread word of his studio’s production capacities. Indeed, not everyone who saw Street Corner was entertained: Hayao Miyazaki, the great antagonist of limited animation, recalls being “so disgusted that chills ran down my spine”.

By the 1980s, Tezuka’s legacy as an industry innovator was secure and he had more time on his hands. With his later shorts, he was perhaps seeking to burnish his credentials as an animation auteur. These ambitious films found a dependable platform in the Hiroshima Animation Festival, which was launched in 1985, and won prestigious prizes abroad. They only reached the wider public this century, via DVD. Ironically, to a viewer outside Japan, they are now the most accessible part of the Tezuka canon. Whereas his series are generally long, untranslated and hard to track down, the shorts await on YouTube, bite-sized and dialogue-free.

Related to Looping around limitations: the experimental shorts of Tezuka Osamu