The now-expat star of Selma and A United Kingdom demanded changes at the top to redress the systemic whitewashing of British histories on screen in a heartfelt speech to the London Film Festival’s Black Star symposium. Directors Noel Clarke, Amma Asante, Julie Dash, Barry Jenkins and others then joined Oyelowo on stage to discuss how to progress beyond these sort of debates. 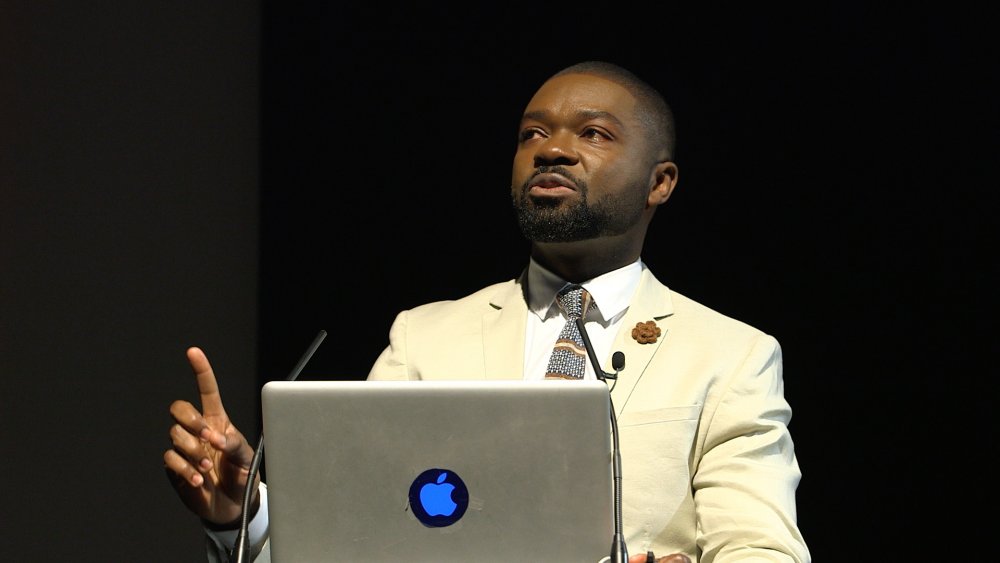 In his keynote address at the 60th London Film Festival’s Black Star Symposium, a sharply suited David Oyelowo spoke about his experience making Kevin Macdonald’s The Last King of Scotland (2007). Oyelowo explained that in the film’s original script, Idi Amin had been a peripheral character – and that the film “had” to be re-shaped in the edit due to “the sheer force of Forest Whittaker’s performance”. This – the way black actors have challenged, subverted, shaped and reclaimed otherwise ‘white-authored’ films – is the thesis that sits at the crux of the BFI’s forthcoming Black Star season.

Resistance was also at the core of the three-hour industry conference on ‘diversity’ (this time as the word pertains to race, following last year’s Gender in Media symposium presented in collaboration with the Geena Davis Institute). Oyelowo’s opening statement? “I’m really, really tired of talking about diversity.”

To Oyelowo I say, me too. As somebody who attends a lot of these sorts of events (and is frequently called upon to write about them too), I have often found them to be repetitive, circular and draining – too focused on berating the problem and not enough on how best to illuminate the ‘diverse’ filmmakers making interesting, daring work. Cultural curator Gaylene Gould, who chaired the second of two sessions, was smart to note that these kinds of conversations are “deeply emotional” – and, in Black Star programmer Ashley Clark’s words, “often exhausting”. (“These talks take energy and time away from what I really love to do – which is storytelling,” said Oyelowo.) Yet sitting among the many people of colour in the audience, watching these power players of colour share anecdotes, advice and affirmations of the anxieties so many black and brown people working in this industry also experience, felt like a generous extension of solidarity.

Oyelowo discussed a treatment that he wrote for a period drama about black boxer Bill Richmond, and the frustrating feedback he received from one financier, whose ominous email argued that audiences would only be interested in stories that were either “a familiar title or a piece of history ripe for a revisit”. “If my indisputable British history has never been visited,” demanded Oyelowo, “where does that put me?”

In person and in his films, the actor is a commanding – and entertaining – orator; yet while much of his speech was delivered with cheery humour, Oyelowo ended on a sombre note. He confessed tearily that it was the hostility of the UK film industry towards black actors that compelled him to leave the country for Los Angeles. “Please stop this talent drain,” he pleaded – before receiving a standing ovation.

Data was not the focus of the symposium, though the BFI’s Creative Director Heather Stewart did follow Oyelowo’s speech with a brief presentation of unsurprising statistics [presented in the November 2015 issue of Sight & Sound]. These were pulled from a sample of black actors across UK films across the past ten years, including British co-productions like 12 Years a Slave (2014) and Selma (2015). The sample of 1,172 films threw some facts and figures into sharp relief; namely that just 13 per cent of films feature at least one black actor in a leading role (a figure that’s remained static over this period) and the even more troubling statistic that 59 per cent of these films contained no named roles for black actors at all. Indeed, half of all leading performances for black actors over this period are concentrated in 47 films – which makes up less than five per cent of the total output of films across this timespan.

This presentation was followed by two conversations in panel format. Ashley Clark led a panel that featured Oyelowo, filmmakers Julie Dash and Noel Clarke, Channel 4 Diversity Executive Ramy El-Bergamy and the actor Trevante Rhodes. Dash, whose recently restored Daughters of the Dust screens in the festival’s Treasures strand, was “thrilled” that a whole new generation would have the opportunity to experience her film on the big screen. Speaking of the film’s legacy and the difficulties she had getting subsequent feature films made, Dash said she felt that “because it was an all-black cast, and in dialect, and about traditions, and myths, and all of these things that some people found not accessible”, wider audiences were “frightened” of the “diverse” content she had created.

According to Oyelowo, “Part of the exhaustion with the diversity conversation is that the film gets ghettoised, it gets compartmentalised… It’s not seen as something for everyone.” (“Mine are a little ghetto anyway,” interjected Clarke.)

El-Bergamy conceded that “Diversity is a bit of a dirty word,” though he stressed, “If there aren’t more diverse people making content, there’s not going to be more diverse content on screen.” Oyelowo emphasised the importance of intentionally backing diverse talent at development stage, citing the blocks that Ava DuVernay faced before being hired to direct Selma. The film’s executives wanted a black director – but one who had worked at a budget level of $20 million (her previous film, 2012’s Middle of Nowhere, was made for just $200,000). “By doing that,” said Oyelowo, “you have immediately cut off [sic] 99.9 per cent of every black director on the planet.” Diversity, he argued, has “got to be baked into the foundations of where the ideas come from.”

Elsewhere Clarke clashed with programmer and chair Clark, flagging the fact that his films had not been selected as part of the Black Star programme. Clark responded thoughtfully, maintaining that the Black Star’s British selection is meant to correct the country’s collective “cultural amnesia”. He elaborated that the BFI wanted to “pay dues to the fact that black people have lived in this country [and been on film] since 1910, 1920”. This echoed Oyelowo’s earlier words that people of colour have been expunged from Britain’s history – and that “as a proud African, as well as a very proud Brit, I know that black people’s history in the UK did not start with the Windrush.”

In an interlude between panels, MediaCom’s Karen Blackett extolled the Rooney Rule, a HR practice borrowed from American football that mandates the inclusion of candidates of colour on the shortlist for every senior role.

Jenkins talked about how the context had changed since he made his first feature Medicine for Melancholy for $13,000 dollars eight years ago. “Something happened four, five years ago,” said Jenkins of the recent surge of black filmmakers making interesting work. “It’s the fact that our president is black.” He continued: “The situation has been turned on its head after Ryan Coogler and Ava DuVernay have just proven that there is an audience for these very personal stories about people of colour, people who are queer, anyone who considers themselves Other. Literally, the company that financed Moonlight [A24 Films] did not exist in 2008, they started in 2012.”

Of the political climate in the UK, Nwokorie was cynical. “I don’t see diversity in the national discourse. In America, there are voices on TV. In Britain, they’re just not here,” he lamented.

British director Asante quipped back, maintaining that films can “walk people through a pathway and open these windows on discussions and reach people who may not be watching Newsnight, who may not be reading the Guardian”. This is precisely why she made period dramas Belle and A United Kingdom: “It allows you to smuggle your ideas, as Scorsese says. It allows you to be subversive in what you’re doing; it allows you to bring something to an audience. You tell them they’re going to see a love story and they come out with a whole load more information and it contributes to a discussion. It allows us to see once again how far we’ve come or not.”

On the other hand, Jenkins – whose Moonlight avoids easy didacticism by telling a story that is intimate, personal and textured – seemed to operate from a different agenda. “I just want to see interesting shit, so I’m trying to create interesting shit.”

There is of course value in a diverse (!) range of approaches to filmmaking from writers and directors of all ethnicities. What still stands is Gould’s call for tangible jobs rather than preparation for potential opportunities – in response to Roberts’ admission that much of the rhetoric around ‘diversity’ starts and ends at training.

Indeed, when asked what it was that helped her achieve success, Asante replied: “It was definitely financing. I was not short on ideas.” And as Gould said in her closing remarks: “We don’t need training. We’re good.” 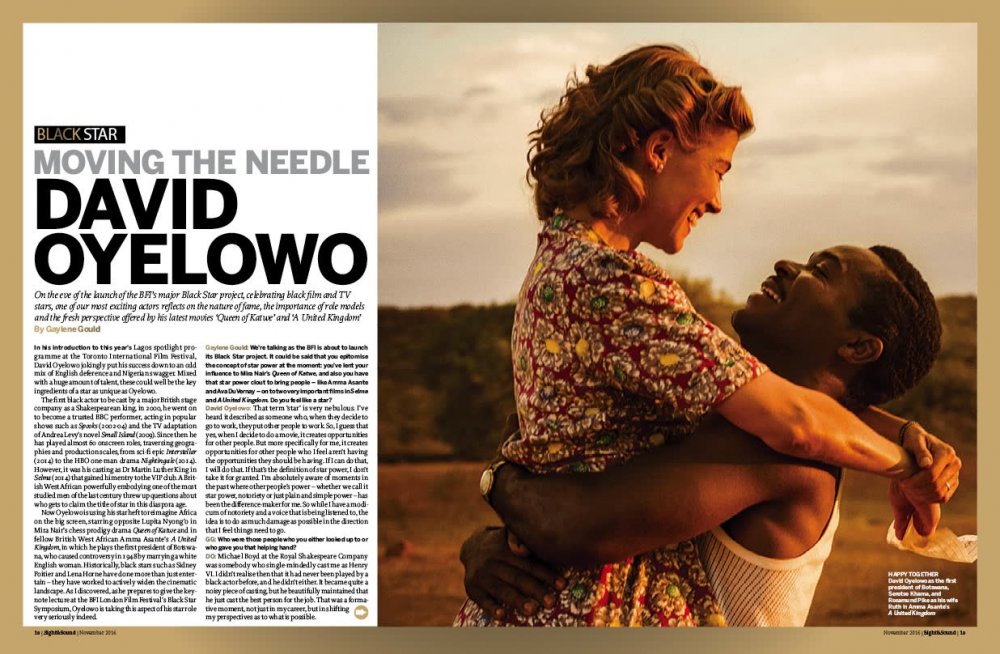 On the eve of the launch of the BFI’s major Black Star project, celebrating black film and TV stars, one of our most exciting actors reflects on the nature of fame, the importance of role models and the fresh perspective offered by his latest movies Queen of Katwe and A United Kingdom. By Gaylene Gould.

+ Scenes from a marriage

Director Amma Asante relates how David Oyelowo tipped her off to the interracial love story A United Kingdom, and explains why the tale held such a personal resonance for her. By Gaylene Gould. 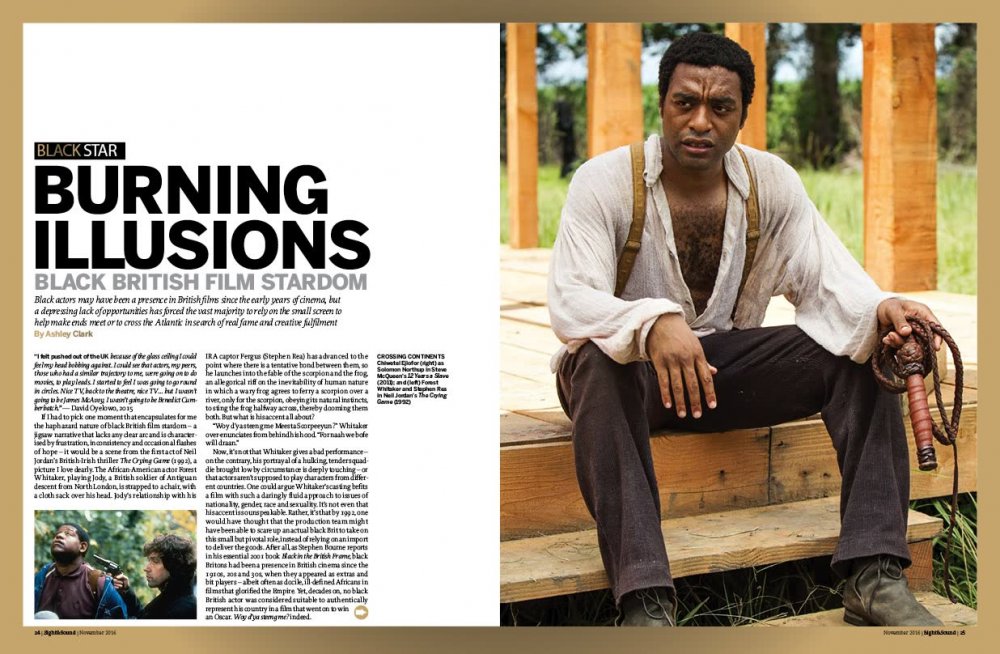 Black actors may have been a presence in British films since the early years of cinema, but a depressing lack of opportunities has forced the vast majority to rely on the small screen to help make ends meet or to cross the Atlantic in search of real fame and creative fulfilment. By Ashley Clark. 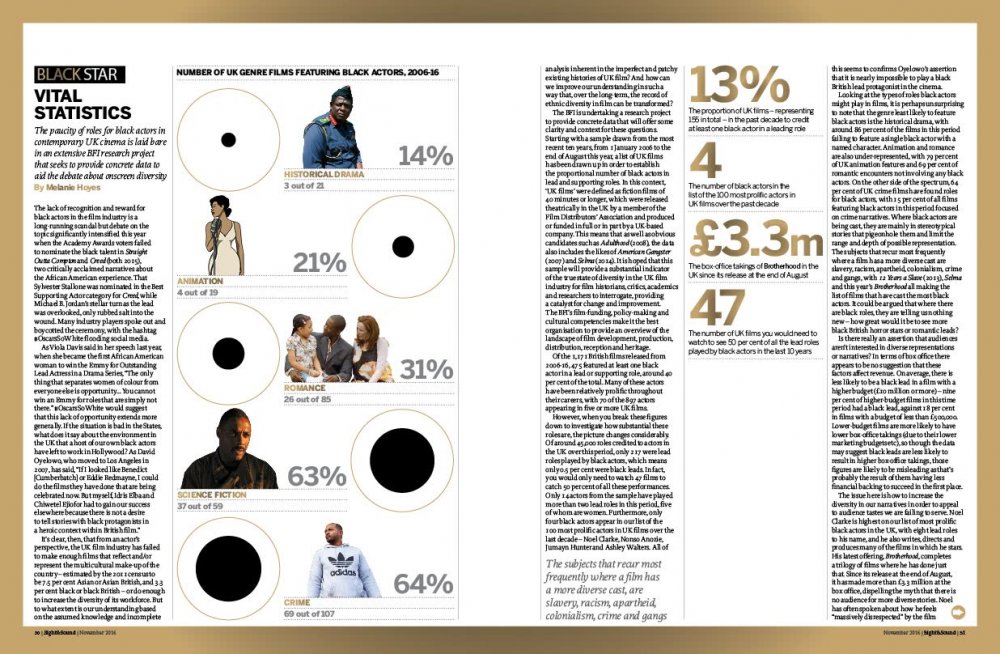 The paucity of roles for black actors in contemporary UK cinema is laid bare in an extensive BFI research project that seeks to provide concrete data to aid the debate about onscreen diversity. By Melanie Hoyes.

Get our Black Star special issue