Amma Asante brings out more British colonial skeletons, and dusts off the woman’s picture, with this retelling of the post-war, inter-continental love story between Seretse Khama and Ruth Williams. 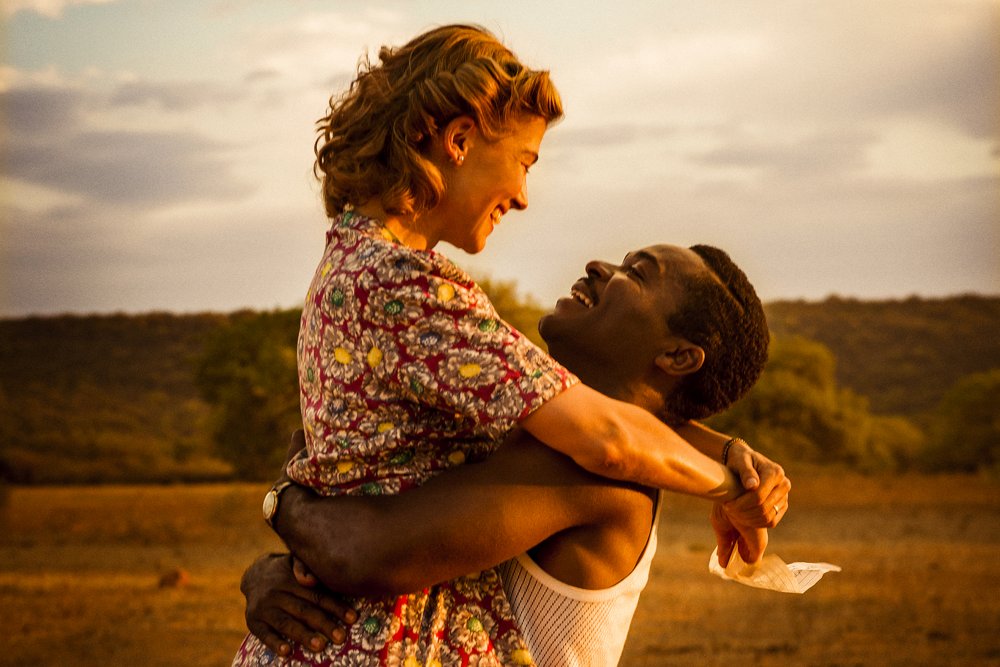 In her third feature, Amma Asante takes the origin story of interracial power couple Seretse Khama and Ruth Williams and coats it with high-sheen Hollywood gloss. Based on Susan Williams’ book Colour Bar and set in London and Bechuanaland (now known as Botswana) in the late 1940s, A United Kingdom is Asante’s second historical romance and as rich in detail and design as her 2013 costume drama Belle.

When Khama (David Oyelowo) and Williams (Rosamund Pike) lock eyes across a crowded, smoky room, their attraction is instant – and instantly dangerous. Though Oyelewo’s Seretse – a handsome law student, recreational boxer and actual prince – is clearly a catch, the socially-sanctioned racism displayed by Ruth’s family and south-east London neighbours mean that her decision to eventually marry him is a weighty one. Ruth relocates to Bechuanaland with Seretse, receiving an unwelcome reception from her husband’s homeland. Yet this is never framed as unjustified and Asante is careful to balance the concerns of Sereste’s community and his responsibility to his own people with her heroine’s personal journey. Asante assigns no qualities of overt moral goodness or progressive political agenda to Pike’s Ruth, who is painted as an ordinary (if resilient) young woman with ordinary concerns. In this instance, whiteness is a fact and not a virtue; by consciously avoiding the ‘white saviour’ trope that so often colours these sorts of colonial dramas, Asante gently shuffles the typically conservative genre into a more progressive position while managing to maintain most of its traditional pleasures.

Though at just shy of two hours A United Kingdom is not terribly long, it feels much longer; there may be a lot of life compressed into the film’s timeline, but it might’ve benefitted from punchier plotting. Still, Oyelewo and Pike hit all of their emotional beats, and it’s hard not be moved when the pair are reunited on screen after an unavoidable, months-long separation in the film’s latter half. Both actors offer polished performances; Oyelewo is a commanding orator (similarly demonstrated in Ava Duvernay’s Selma, where he played Martin Luther King, Jr.), while Pike proves herself to be a high-calibre character actress, trading her usual frostiness for something sweeter and more relatable. Compared to her turn as Gone Girl’s Amy Dunne, she’s positively girlish here.

A high-stakes romantic melodrama of this nature won’t be to everyone’s tastes – its ‘feelgood’ freeze-frame ending is predictably saccharine. Yet, Asante’s take on the genre still offers a few subtle twists. In many ways, Asante’s feminine perspective is the most interesting thing about the film: she gives voice to otherwise secondary female characters, highlights the everyday office sexism experienced by Ruth (“I’m not a typist!”), and casts her male lead as the tearier, more sensitive partner in their marriage. By carving out space to track the development of the relationship between Ruth and Sweste’s disapproving sister Naledi (Terry Pheto), Asante demonstrates a deeper understanding of what a woman’s picture might need to encompass in a contemporary context.