We go once more over the threshold with Guillermo del Toro – further honing his gothic gifts with the wonderful Crimson Peak; with Andrei Tarkovsky – the Russian film seer who opened whole new realms of film poetry for others to follow; and with Yorgos Lanthimos, the young Greek satirist whose latest spiky parable The Lobster comes studded with stars.

Plus: back to the barricades with Carey Mulligan and Suffragette; across the US-Mexico borderlands with Denis Villeneuve’s Sicario; and out of the box with a revival of British television documentaries from the 1950s and 60s. 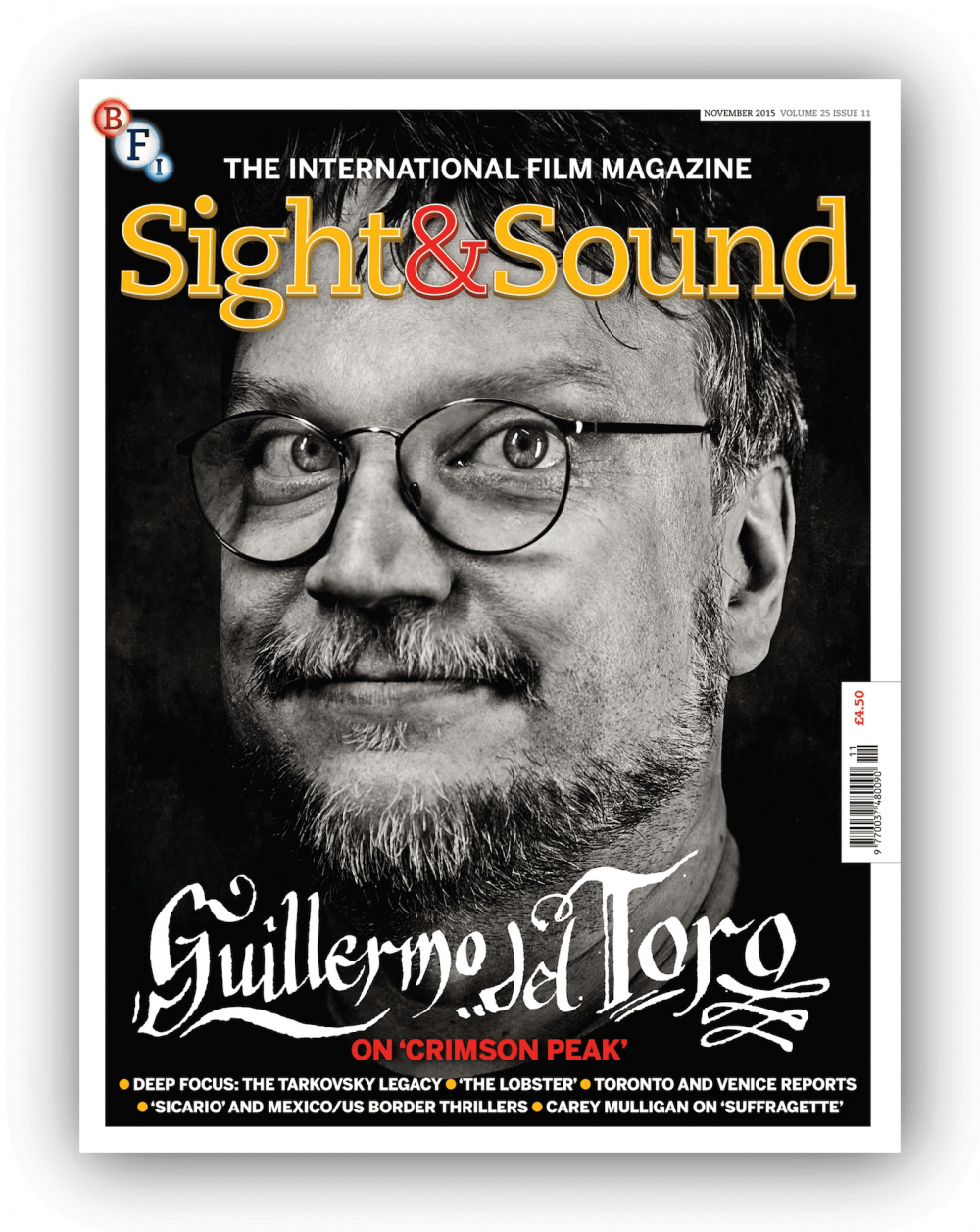 Our November issue ventures into the haunted netherworld of gothic cinema as we speak to Guillermo del Toro about his magnificently spooky new film Crimson Peak – which stars Mia Wasikowska as a young American woman who in the early 20th century travels to a grand, ornate mansion in the Lake District, home of the mysterious baronet Sir Thomas Sharpe (played by Tom Hiddleston) and his icy sister Lady Lucille (Jessica Chastain).

Del Toro has long drawn inspiration from the deep well of the gothic, not least in his earlier masterful ghost and fantasy tales The Devil’s Backbone and Pan’s Labyrinth, but Crimson Peak is the Mexican director’s most richly gothic movie yet – and a creative triumph that may be his best film so far. He talks to Mar Diestro-Dópido about how he wanted to capture the same atmosphere as the big Hollywood gothic fantasies of the 1940s – films such as Hitchcock’s Rebecca and Lean’s Great Expectations – and about his own encounters with ghosts.

Andrei Tarkovsky may never have explored the Gothic tradition, but in his seven films he helped to create a new space in cinema that reached beyond realism and the everyday and into a more poetic realm. As the BFI Southbank holds a full Tarkovsky retrospective and an accompanying Sight & Sound Deep Focus season that explores the Russian director’s legacy, Nick James considers how Tarkovsky helped to redefine the possibilities of arthouse cinema, and traces the threads of his influence through 12 films by different filmmakers who, in varying ways, owe him a debt – from Lars von Trier and Terrence Malick to Claire Denis and Béla Tarr.

The Greek director Yorgos Lanthimos’s latest film The Lobster takes a rather different approach to exploring a cinematic terrain beyond straight realism. It’s a wry, satirical fantasy about a world in which singletons are forced to pair up or face being turned into animals. Lanthimos talks to Trevor Johnston about making his first film outside his native Greece, and about working with stars like Rachel Weisz and Colin Farrell.

Our other features this month concern films or subjects more rooted in the tough realities of real life. Michael Atkinson considers how Denis Villeneuve’s new drug cartel drama Sicario sits in a growing line of films set amid the violent and unstable US-Mexico borderlands. Isabel Stevens talks to Carey Mulligan about her role as a radical advocate of women’s rights in Sarah Gavron’s new film Suffragette; and John Wyver explores a new BFI-curated programme of little-seen television documentaries from the 1950s and 60s, and finds them fascinating not only for the window they give onto a vanished past, but also how personal and experimental such nonfiction television work could be in those years. Many of such TV films were directed by figures who went on to work in cinema – men such as Ken Russell, John Schlesinger and Peter Watkins; but there were also others who are yet to receive their due – something the forthcoming BFI Southbank season and two DVD boxsets will go some way to putting right.

Elsewhere in the issue, we report on the big titles that premiered at the Venice and Toronto film festivals in September – from Ben Wheatley’s J.G. Ballard adaptation High-Rise and Terence Davies’s Sunset Song to Charlie Kaufman’s Anomalisa and Luca Guadagnino’s A Bigger Splash.

Our Wide Angle section features a profile of Valeria Sarmiento, whose own work has often been overshadowed by her collaborations with her late husband, Raúl Ruiz. And Stewart Lee takes time out from his current stand up tour to pen a tribute to his “favourite British filmmaker”, Andrew Kötting.

Finally, David Thomson rounds out the issue with a consideration of the memorable final scene of Terrence Malick’s The Thin Red Line. All this and more… 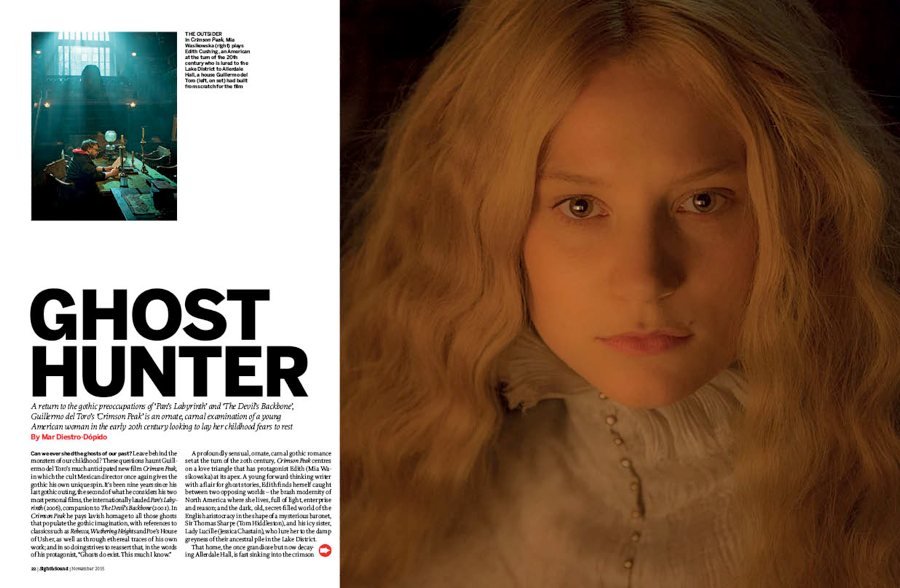 A return to the gothic preoccupations of Pan’s Labyrinth and The Devil’s Backbone, Guillermo del Toro’s Crimson Peak is an ornate, carnal examination of a young American woman in the early 20th century looking to lay her childhood fears to rest. By Mar Diestro-Dópido.

☞ Read Guillermo del Toro on ‘children of the night’ in the BFI compendium Gothic: The Dark Heart of Film

☞ Read Guillermo del Toro’s essay Lessons in Darkness in our August 2012 issue or in the BFI compendium 39 Steps to the Genius of Hitchcock. 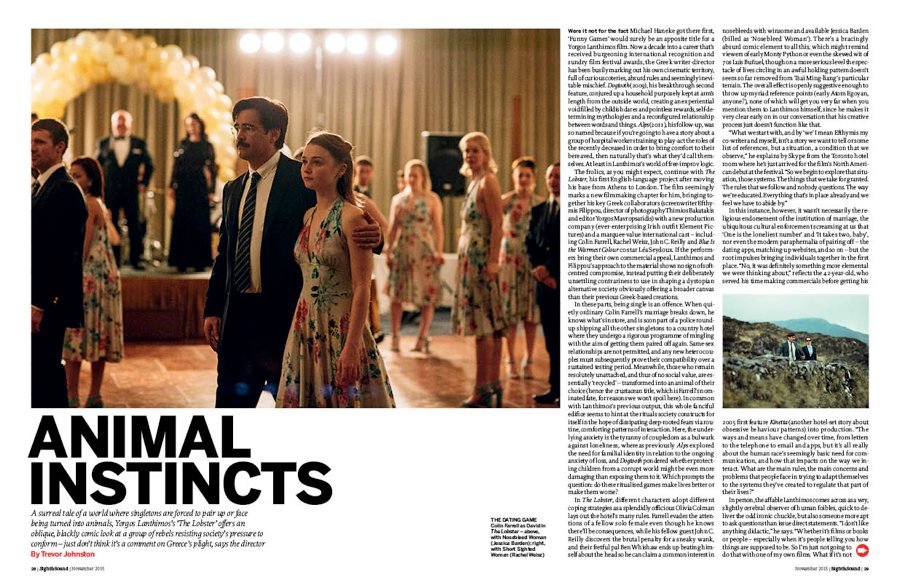 A surreal tale of a world where singletons are forced to pair up or face being turned into animals, Yorgos Lanthimos’s The Lobster offers an oblique, blackly comic look at a group of rebels resisting society’s pressure to conform – just don’t think it’s a comment on Greece’s plight, says the director. By Trevor Johnston. 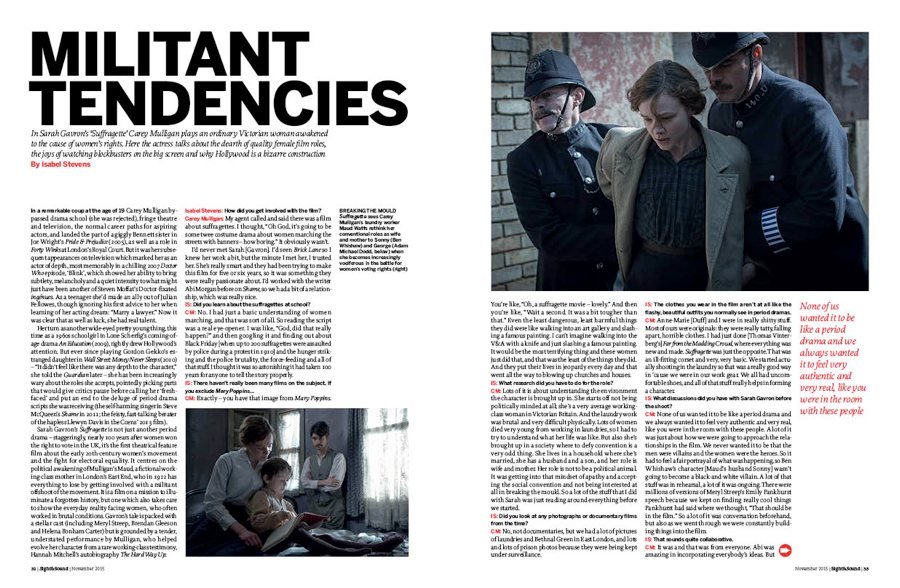 In Sarah Gavron’s Suffragette Carey Mulligan plays an ordinary Victorian woman awakened to the cause of women’s rights. Here the actress talks about the dearth of quality female film roles, the joys of watching blockbusters on the big screen and why Hollywood is a bizarre construction. By Isabel Stevens.

An anthology of films documenting the rise of the women’s suffrage movement in the UK offers a fascinating portrait of shifting gender roles in the early years of the 20th century. By Pamela Hutchinson. The Way We Were

The revival of a number of long unavailable television documentaries from the 1950s and 60s reveals how daring, personal and experimental nonfiction television of the time could be – as well as offering a poignant glimpse of Britain during a time of great change. By John Wyver. 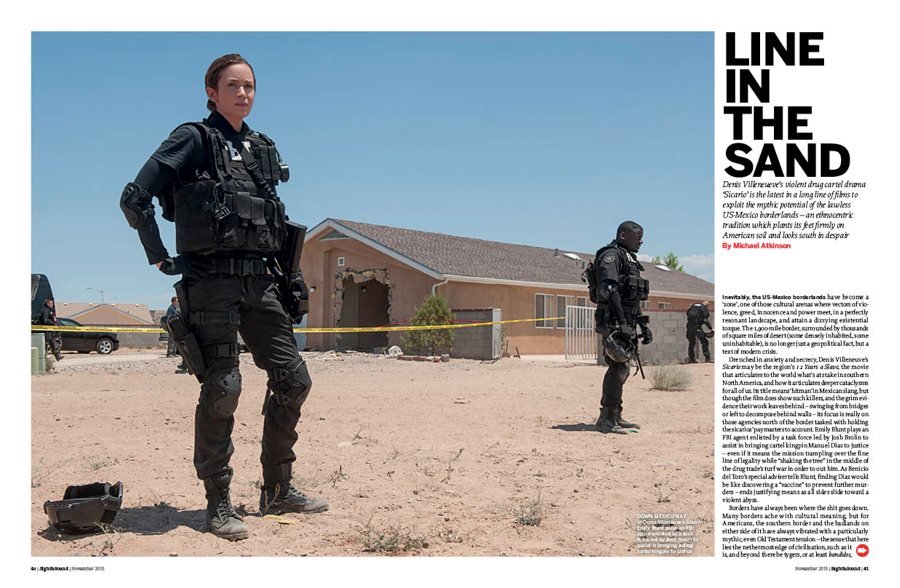 Line in the Sand

Denis Villeneueve’s violent drug cartel drama Sicario is the latest in a long line of films to exploit the mythic potential of the lawless US-Mexico borderlands – an ethnocentric tradition which plants its feet firmly on American soil and looks south in despair. By Michael Atkinson. 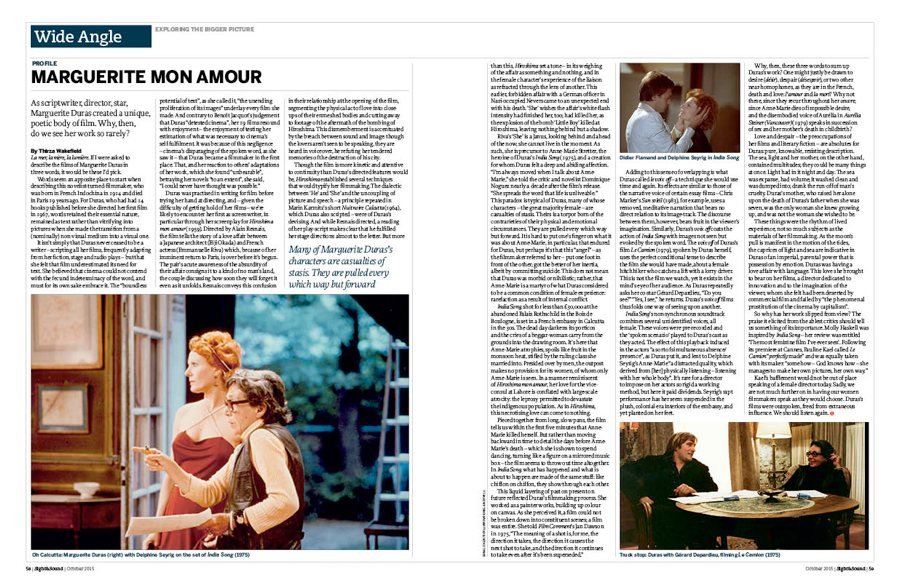 The slim body of work produced by the great Russian director Andrei Tarkovsky (1932-86) – seven transcendent, spiritual films marked by exquisite visual imagery, mesmerising long takes, a near-pantheistic reverence for landscape and nature, and a seamless blending of real time, dream and memory – helped redefine the possibilities of arthouse cinema. His enduring influence can be seen in the eclectic array of filmmakers of the past 30 years whose work, in different ways, owes him a debt, from Lars von Trier and Terrence Malick to Béla Tarr and Claire Denis. By Nick James. 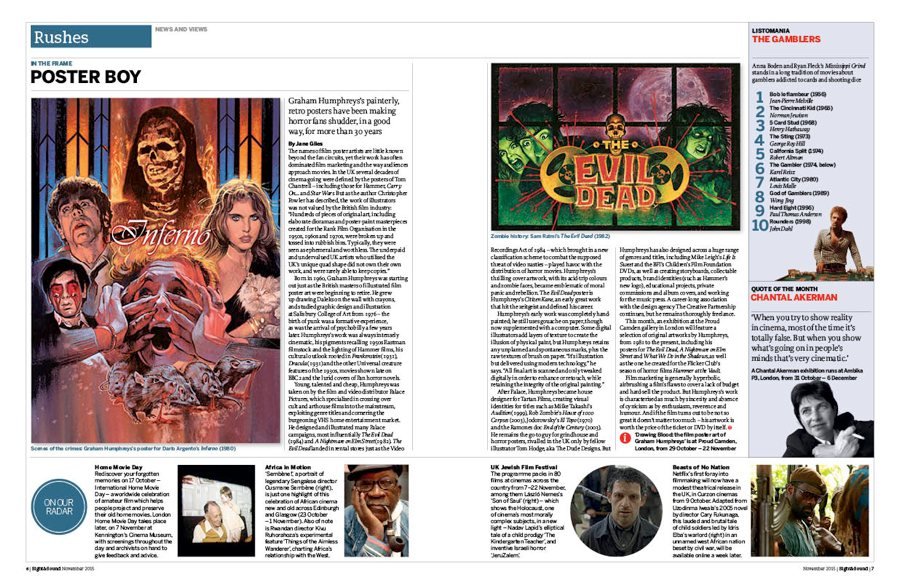 In the frame: Poster boy

Graham Humphreys’s painterly, retro posters have been making horror fans shudder, in a good way, for more than 30 years. By Jane Giles.

The hamburger phone in Juno follows a tradition of ironic teen accoutrements in US indie comedy – but what’s all that irony hiding? By Hannah McGill.

On an island, in the desert, at sea or in space – the lone individual struggling to stay alive can make for gripping drama. By Nick Pinkerton.

Dispatches: Time for a change

Transgender is suddenly a popular subject – but transitions of all sorts, crossing boundaries, are at the heart of film. By Mark Cousins. 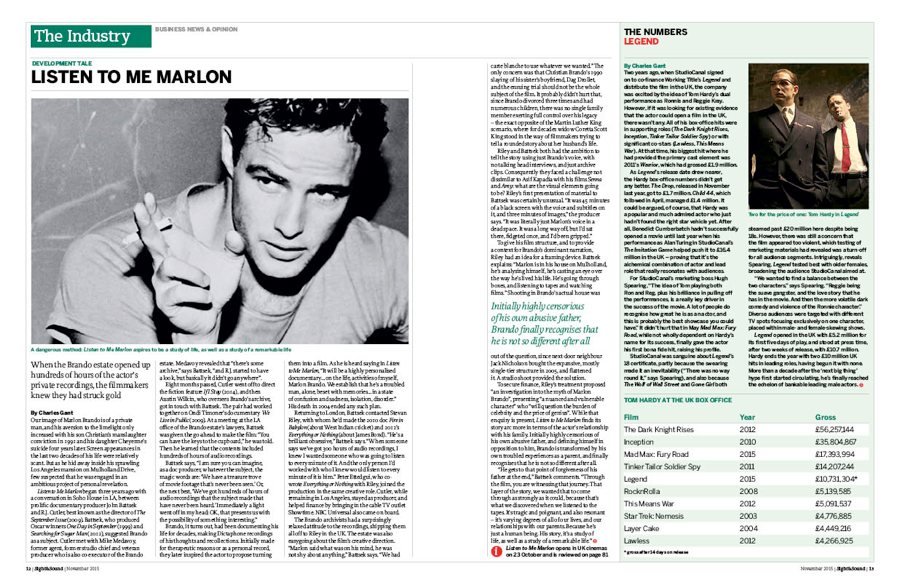 Development tale: Listen to Me Marlon

When the Brando estate opened up hundreds of hours of the actor’s private recordings, the filmmakers knew they had struck gold. By Charles Gant.

Tom Hardy at the UK box office, by Charles Gant. 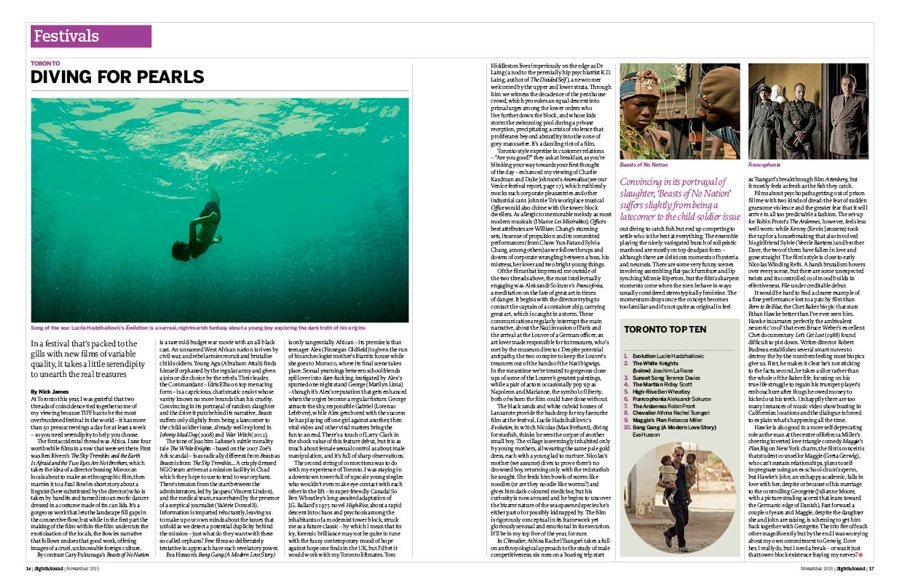 In a festival that’s packed to the gills with new films of variable quality, it takes a little serendipity to unearth the real treasures. By Nick James.

This year’s Venice Film Festival had its bland moments – but it was certainly better than the one the Competition jury went to. By Jonathan Romney.

The dominant theme at this year’s festival seemed to be the sense of being trapped, mentally, physically or, most often, both. By Kim Newman. 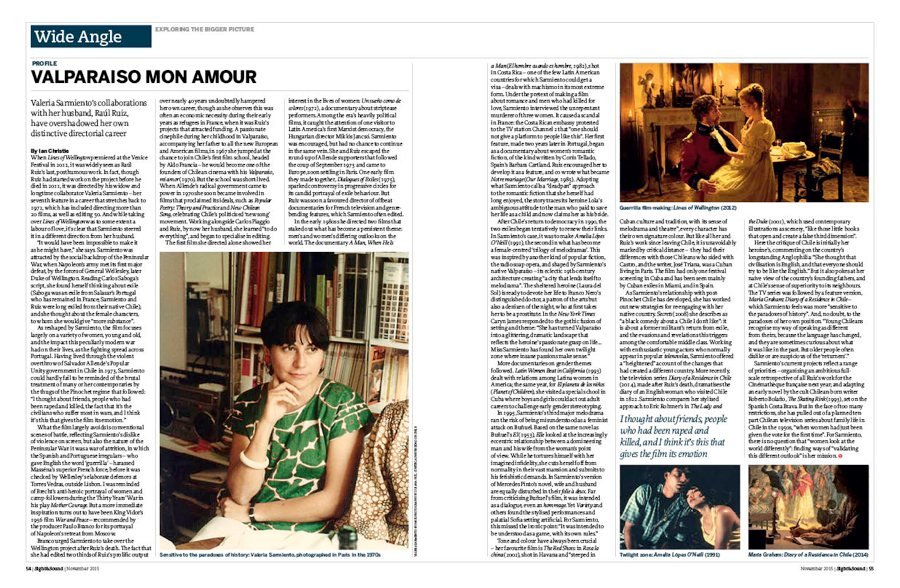 Valeria Sarmiento’s collaborations with her husband, Raúl Ruiz, have overshadowed her own distinctive directorial career. By Iain Christie.

Two new documentaries tracing the origins of the industrial music scene suggests that it wasn’t all nihilistic destruction. By Colm McAuliffe.

In his first film, Anthony Asquith lampooned the excesses of the film industry – and declared how much he adored it. By Bryony Dixon.

The banal-sounding premises and mysterious motivations of Andrew Kötting’s films contain a world of beauty and genius. By Stewart Lee.

Facing official disapproval at home, the Beijing Independent Film Festival is flourishing in a new guise in New York. By Sukhdev Sandhu. 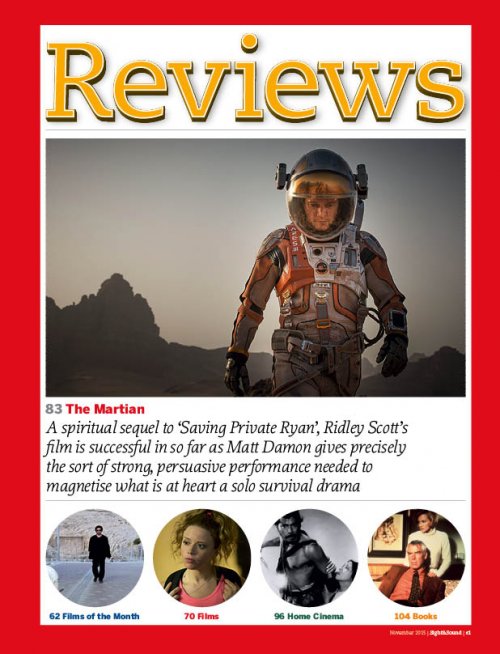 Addicted to Fresno
The Black Panthers: Vanguard of the Revolution
Captive
Censored Voices
Convenience
The Death and Resurrection Show
A Dozen Summers
The D Train
Everest
Fresh Dressed
A Haunting in Cawdor
Hellions
Hitman: Agent 47
The Intern
Lessons in Love
Life
Listen to Me Marlon
The Lobster
Made You Look
Make More Noise! Suffragettes in Silent Film
The Martian
Maze Runner: The Scorch Trials
McFarland, USA
Miss You Already
Mississippi Grind
The Nightmare
The Program
Red Army
Sicario
Sinister 2
The Sound of Fury
Suffragette
SuperBob
They Will Have to Kill Us First
The Transporter Refuelled
The Visit
We Are Your Friends 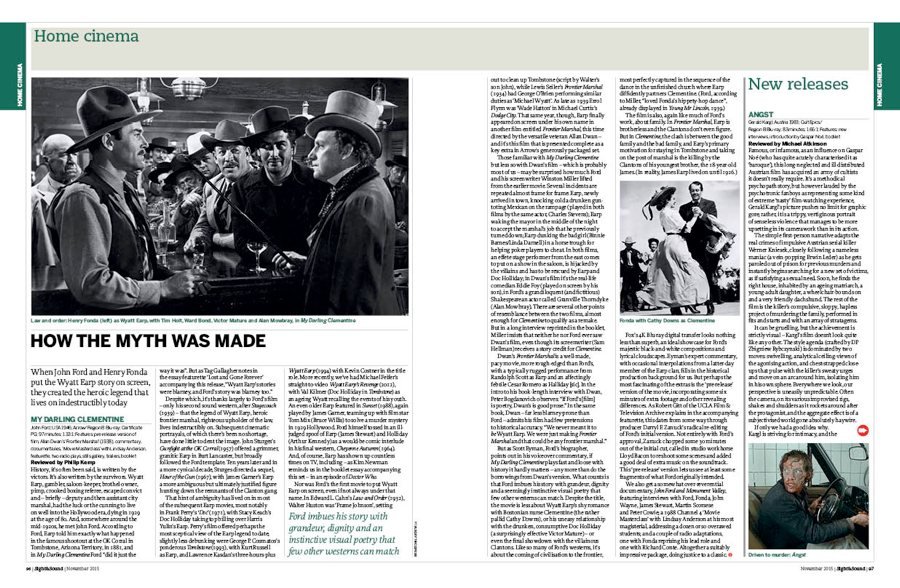 How the myth was made: My Darling Clementine

When John Ford and Henry Fonda put the Wyatt Earp story on screen, they created the heroic legend that lives on indestructibly today. By Philip Kemp.

Revival: Night and the City

Jules Dassin was himself fleeing the anti-communist blacklist when he made this on-the-run movie in a seedy post-war London. By Kim Newman.

A uniquely Mexican take on The Taming of the Shrew mixes macho action, screwball comedy and rapturous romance. By Philip Concannon.

The Green Man
The Knick
Microbes and Men 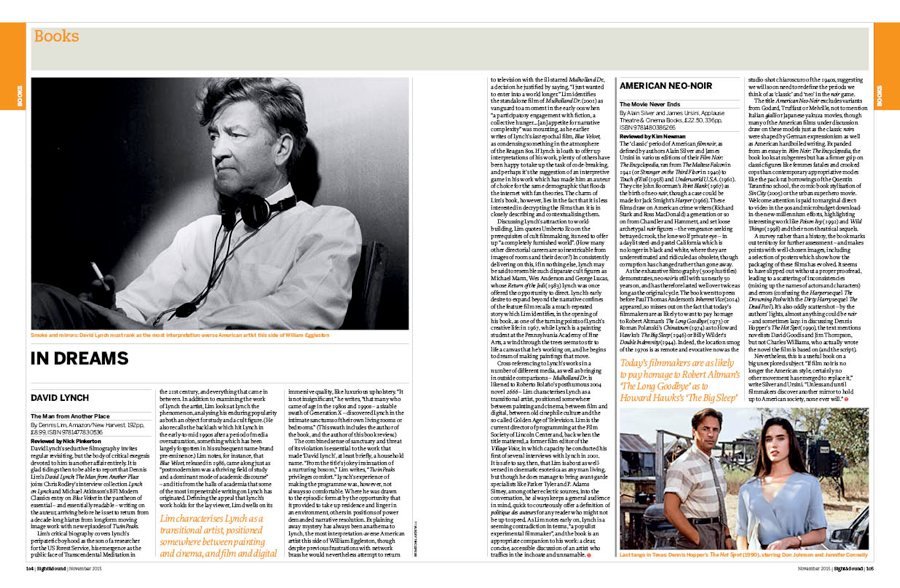 David Lynch: The Man from Another Place by Dennis Lim (Amazon/New Harvest) reviewed by Nick Pinkerton.

Studios Before the System: Architecture, Technology, and the Emergence of Cinematic Space by Brian R. Jacobson (Columbia University Press) by Ian Christie. 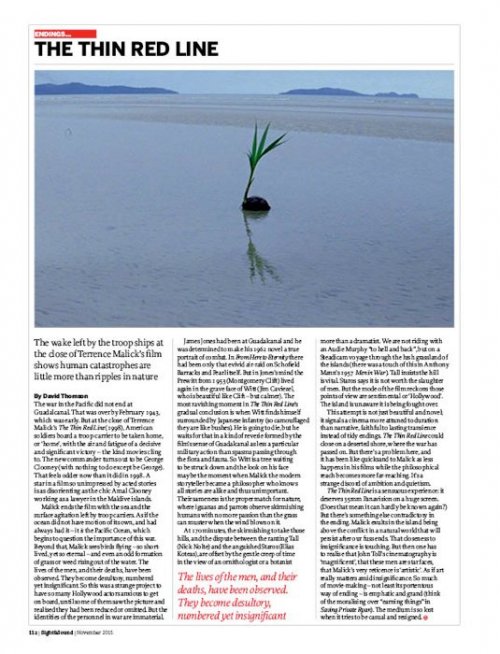 The wake left by the troop ships at the close of Terrence Malick’s film shows human catastrophes are little more than ripples in nature. By David Thomson.