Bodies and film: Experimenta 2015 at the London Film Festival 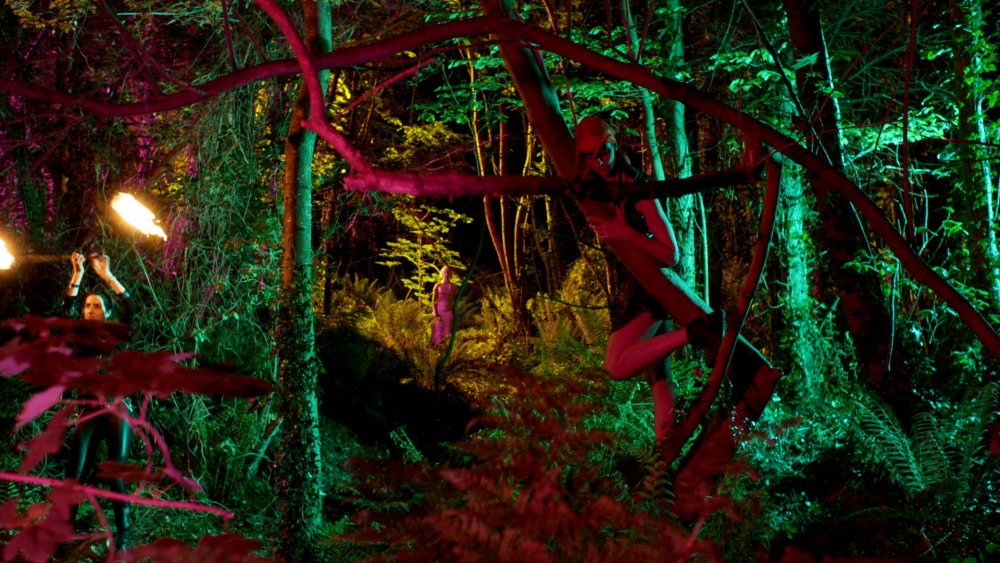 New commissions and archive screenings, British premieres and international discoveries, extended durations (Kevin Everson’s 480-minute Park Lane) and dizzyingly rapid miniatures (Paul Bush’s Five Minute Museum, which covers 10,000 years of human history): Experimenta 2015 consistently straddled dualities, and constantly set them in productive dialogue. Perhaps the strongest binary was that between embodiment and disembodiment – generically speaking, between the traditions of the no-wave diary film and performance art, on the one hand, and those of structuralist, minimalist, conceptual work on the other.

Two feature-length films by British artist-filmmakers cross the divide: Tacita Dean’s Event for a Stage, performed and filmed at the 19th Biennale of Sydney, and Sarah Turner’s Public House, screened in the Documentary competition but produced by FLAMIN, Film London’s experimental movie fund. Both films manifest their complex conceptual frameworks through immediately engaging screen work. In each case, the performing body provides the medium through which cinematic experiment – with 16mm, the pan and editing in Dean’s case, and with multi-layered sound in Turner’s – is projected towards the audience, a connection point that allows us to feel the film deeply. 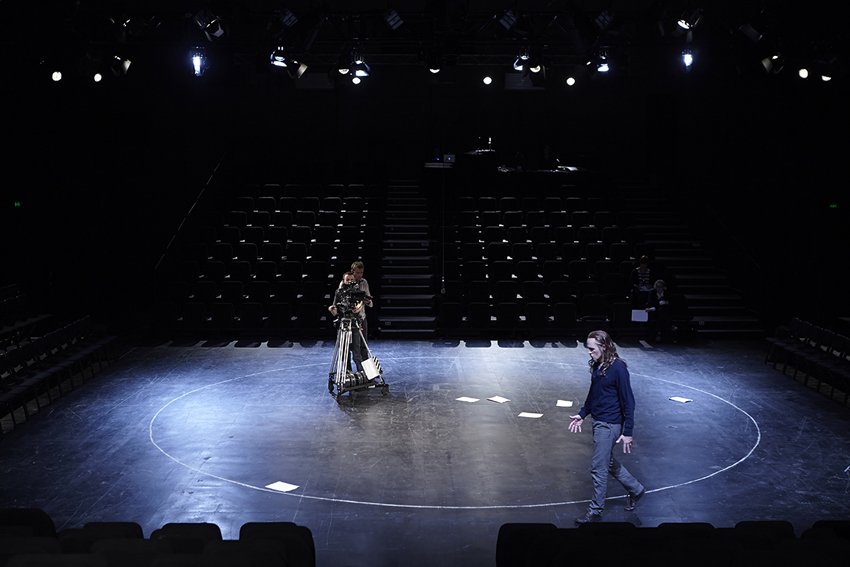 Stephen Dillane in Tacita Dean’s Event for a Stage

Stephen Dillane’s performance(s) for Dean (the production was staged and filmed four times, for four different audiences) takes in The Tempest and Heinrich von Kleist’s On a Marionette Theatre – which he reads, in darkness, into a hanging radio mike. Dillane’s professional status and range makes the film an interesting inversion of Gillian Wearing’s Self Made; here, the investigation is into the trained performer’s self-consciousness, and the audience’s awareness thereof. The filmmaker sits at the edge of the stage in the prompt seat, handing the performer his pages as he delves into seemingly intimate anecdotes of family bereavements. Stopping mid-story to announce the end of reels, Dillane draws attention to the craftedness of acting and film editing, but the crystalline elegance of the concept means we are compelled rather than distanced.

Turner’s film takes a diametrically opposite approach to create a similar sense of implication: hers is a communitarian film on all sides, with no individual star. Public House re-imagines cinema as a truly public house, reminiscent of the street-side cameras of Mitchell and Kenyon acting as an invitation to their subjects to view themselves, communally. Turner’s subjects are the pubgoers and staff of the Ivy House in Peckham Rye – or possibly Nunhead: there’s a classic Londoners’ debate, one of the many moments in which the film’s choral voiceover manages to give voice to community as united but not homogenous. Ivy House was the first pub to be listed as an Asset of Community Value, saved from developers by community shareholders. While the film offers a toolbox for future campaigners, it’s also a participatory portrait, particularly in the poems that give the film its spine. It’s the community who are truly the asset, suggests the film in post-Occupy spirit. Its combination of the choreographic and choral offer a dazzlingly unique form in which to make the collective cinematic. 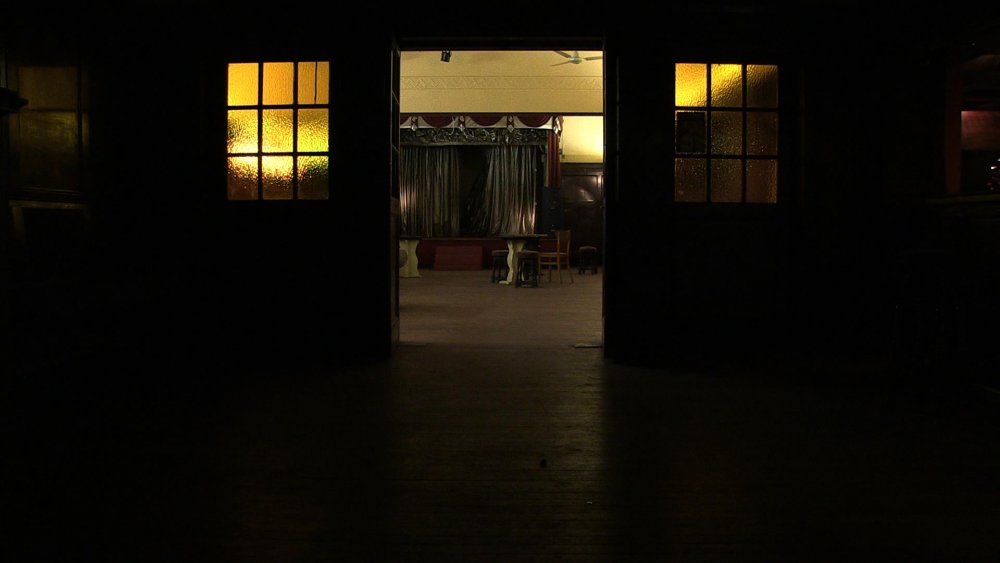 Performance’s ability to negotiate productive tensions between individual embodiment and the collective also marked Beatrice Gibson’s Crippled Symmetries, another FLAMIN-funded project. Here the chorus is composed of schoolchildren engaged in Fluxus music projects, staged to amplify and disrupt the silent mysteries of global capital, part of a coherent programme focused on sonic experimentation. Laida Lertxundi’s more abstract visual compositions in Live to Live re-introduced the body on the soundtrack, with recordings of heartbeat and orgasm, a palpably fascinating response to avant-garde feminist cinema’s continual wrestling with the question of representation.

Tensions between sound, image and process also framed the Dream Worlds and Nightmare Visions programme, which moved from human evolution in Bush’s Five Minute Museum, a damning record of imperialist plunder, to the non-human (canine) in Jenny Brady’s Bone and Tessa Power’s Trickster, then the post-human in Cao Fei’s La Town, whose sensory and affective demands – in the context of its use of toytown figurines – make it experimenta’s The Lego Movie. How you feel about La Town may be determined by how you feel about the visceral yet cynical postmodernity exhibited by both films. 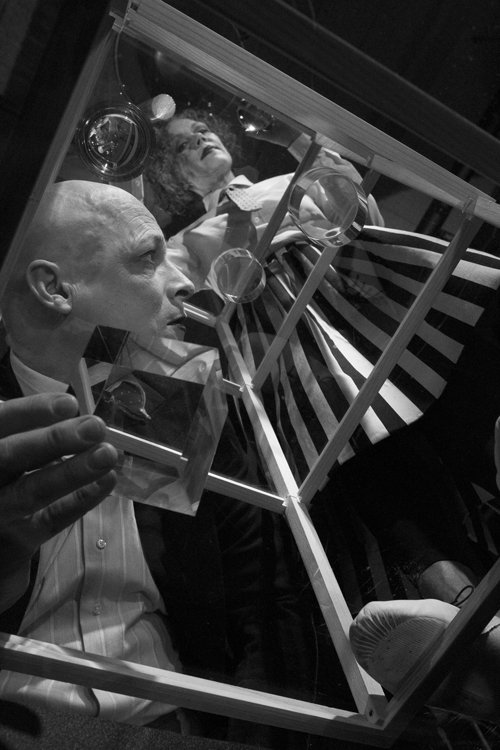 The programme also featured the intelligence of Sergei Eisenstein’s thinking about capitalist America, recovered and recorded in Zoe Beloff’s Glass House, whose use of silent film and its re-performance was reminiscent of the work of Janie Geiser. Its inventive, telling use of archival material to suggest both a counter-historical cinema and the connection between Eisenstein’s era and our own was echoed by Miranda Pennell’s The Host, which opened a more personal archive to consider the continuing investments (in the literal financial, and psychic/cultural, senses) of the modern British nation in colonialism. The Anglo Iranian Oil Company and EuroWestern anthropological fantasies of the ‘origin of civilisation’ are discovered and unpacked through fragmentary records that implicate Pennell’s parents but also the audience. Pennell’s previous concern with the body and performance feels absented here; to integrate the two modes of her filmmaking – ritual performance and political research – could produce something spectacular.

Moyra Davey’s Notes on Blue, commissioned by the Wexner Center in response to the work of Derek Jarman (as the filmmaker notes in her narration), has that combination. Davey quotes Fassbinder early on saying “the more honestly you put yourself into the story, the more that story will concern others”, and her dispassionate clarity raises a standard of honesty in artists’ film. She carefully positions her response to monocular blindness resulting from multiple sclerosis as less urgent than Jarman’s burning response to HIV/AIDS in Blue, but that response is both disciplined and liberated by her relationship to her body, which centres the film, as narrative presence pacing back and forth in her apartment, and in the distinctive tremor of the camera as she shoots friends and family performing around the LRT in New York. 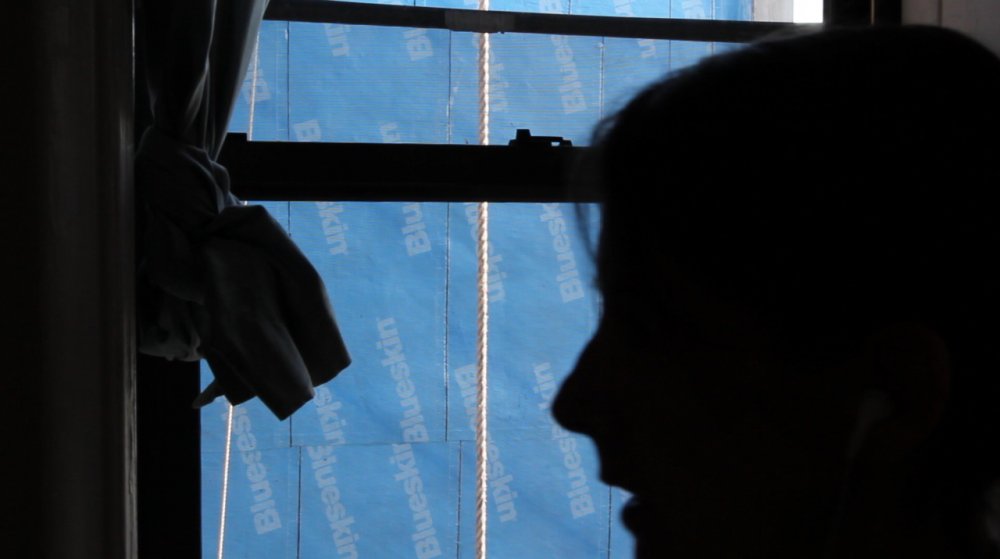 Although Davey doesn’t refer to either the diary film or the performance document, it’s clear that her film embraces both modes of the American avant-garde. Both also clearly influenced Marie Louise Alemann, a German-Argentinean filmmaker and curator who screened work by artists including Paul Sharits at her salon, co-programmed with Narcisa Hirsch, in Buenos Aires in the mid-1970s. Federico Windhausen, who rescued Alemann’s films from her closet, offered a vision of a cultural figure as unique as her films: part of the wealthy European élite, Alemann used her contacts to create space for a primarily queer avant-garde film culture and to bring New German Cinema to Latin America, all the while eluding the attention of the dictatorship.

In Sensación 77: Mimetiso, Alemann prowls through a heavily forested area near Buenos Aires (known as a refuge for political activists escaping the government) in full camouflage, wielding binoculars and wearing headphones, as if to spy on those spying on her. It’s the most overtly political film in the programme, although Escenas de Mesa (1979) is like the end scene of Daisies played out as some kind of experimental torture. 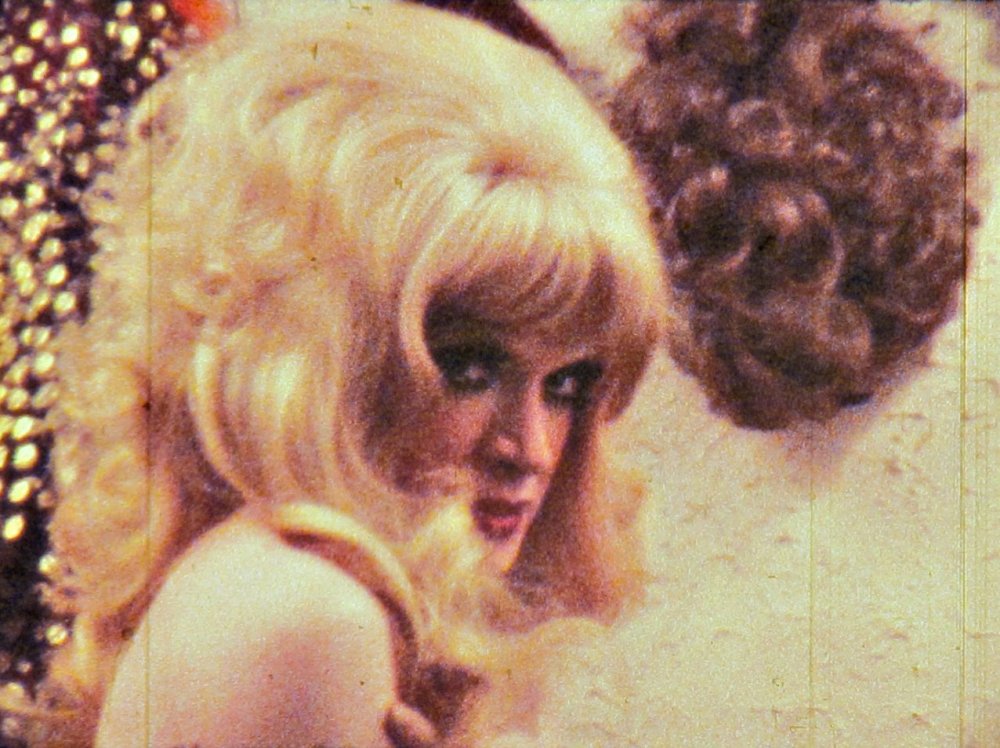 Vanessa (1974) and Umbrales (1980) both foreground queer culture and desire in a Jarmanesque way. Vanessa captures a vivid drag culture, but Umbrales is a gay male Emak Bakia in which dance language and film language intersect poetically to pull us into a mysterious house of many staircases traversed by many men, played by other experimental filmmakers. With an expanding emphasis on recognising the diversity of the avant-garde, Marie Louise Alemann is a welcome Southern Hemisphere inclusion in transnational experimenta.

As is Joanna Margaret Paul: the second Experimenta archive screening brought her diary films from New Zealand, accompanied by a programme of six responses to her work. Filming predominantly in domestic, suburban locales in the 1970s, Paul appears to have instinctively developed a practice resonant with Margaret Tait’s. Both artists discarded the conventional dynamic of centre/margin to recentre on their own locations and domestic preoccupations. In Aberharts House (1976), there’s a smart cut (all of Paul’s films were edited in-camera) between a female figure in the kitchen cutting a sandwich and a male figure in the garden applying a chainsaw to a log. The activities are presented as equal value, and her focus is firmly on the former. 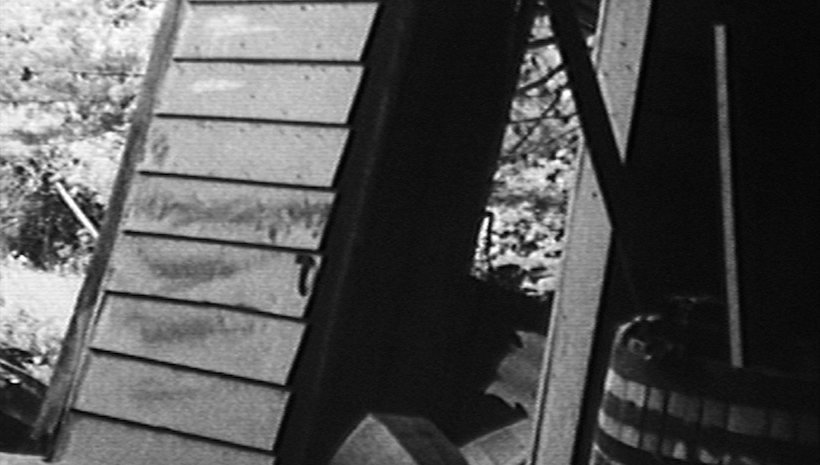 The tender, funny Sisterhood (1975) was shot at a radical separatist women’s house with artist Allie Eagle, whose correspondence with Paul is included in A Woman’s Picture Book, the beloved catalogue of NZ women artists edited by Marian Evans, Bridie Lonie and Tilly Lloyd. Paul’s paintings and photography are well known in a gallery context, and Mark Williams of CIRCUIT is doing crucial work equally aligning her within the experimental film tradition. Of the contemporary films, Rachel Shearer’s plangent I Am an Open Window and Sonya Lacey’s peacefully dystopian By Sea seem particularly responsive to Paul’s genius for attention, the freshness of her camera-eye and its absorption in the shapes and colours of the world.

That freshness saturated the final programme, Girls at Play, featuring new work by Vivienne Dick, Mike Kuchar and Jennifer Reeder. Queerly performative, all three films also had a strong sense of avant-garde history, starting with the homage to Jack Smith and Kenneth Anger in the stunning opening scene of Dick’s Red Moon Rising. Emerging from her knowledge of local cabaret performers – translated from their usual urban barroom setting to the Irish woods – Dick’s film melds an operatic grandeur with a self-aware wit that lets it play with goddess and fairytale archetypes strategically and sinuously. 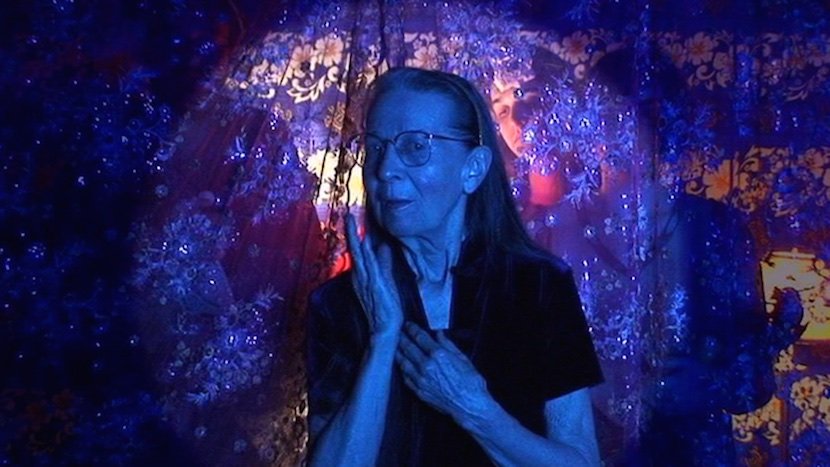 Kuchar’s Rat Nest was similarly at play, as the programme’s title captures, albeit in the more claustrophobic surrounds of the avant-garde poetry scene. Full of anachronistic video work (screen peels, neon frames) and stagily amateurish performances, Rat Nest is unabashedly fun and funny, a rare quality in experimental cinema – one it shares with Reeder’s multi-award-winning Blood Below the Skin.

Set in a palimpsest of the 1980s, 1990s and 2000s – one character’s iPhone has Deniece Williams’ Let’s Hear it for the Boys as its ringtone – the latter is an unfamiliar take on an instantly familiar story: the school prom. Joni (as in Mitchell), Joan (as in Jett) and Darby kiss, tell, appliqué, exercise psychic powers and find true love. An apparently linear narrative, the film dispenses with the ligatures, exposition and psychological realism of conventional teen films, drawing on our shared bank of knowledge to excerpt and hold up shining shards of story. Consciously foregrounding class, race and sexuality, it tells individual stories connectedly, invoking the choral power of community when Joni’s friends diss her (now ex-) boyfriend with a devastatingly harmonised cover of Bigmouth Strikes Again. It’s an exhilarating way to end the Experimenta programme – and look ahead to the experimenta programming in the Love season. Resolving temporal dualities, Blood Beneath the Skin captures the way in which Experimenta looks back by moving forward.

Related to Bodies and film: Experimenta 2015 at the London Film Festival