VR ‘screenings’ at the Encounters Short Film Festival highlighted the ambitions of the new form, but also its limitations for the disembodied viewers swivelling through new sensory worlds. 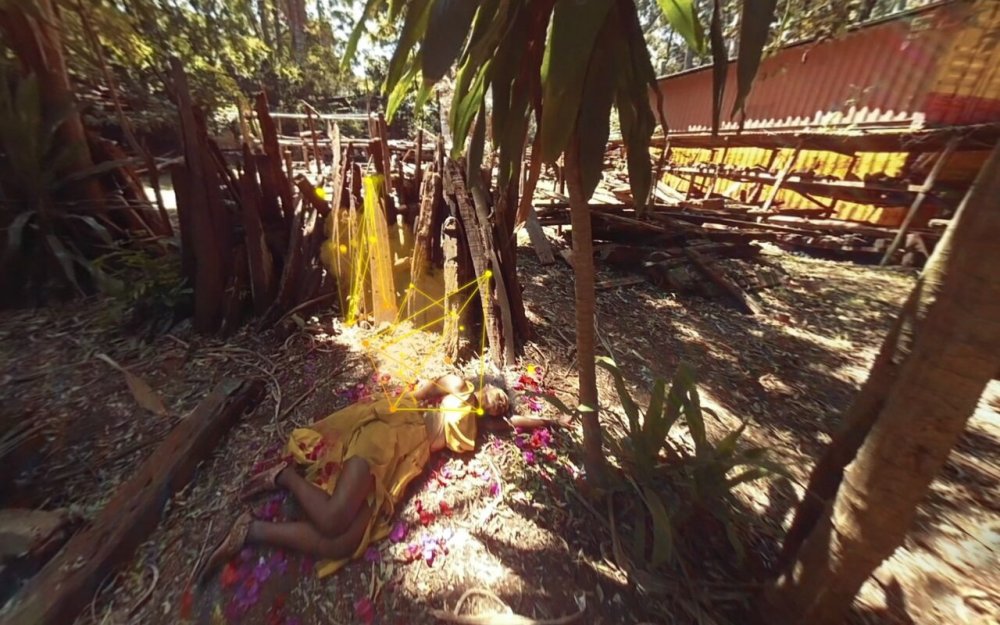 As few as 16 per cent of people in the UK have tried VR, according to independent research undertaken by VR producer and curator Catherine Allen. Its reach will remain limited until it’s more affordable to experience at home (currently, high-quality kit will set you back almost £1,000) or dedicated VR arcades are commonplace. In the interim, access to the sensory technology has increasingly taken up residence at film festivals, with Sundance and Venice paving the way for a potential partnership between cinema and virtual reality.

Encounters dabbled in VR exhibition back in 2014, when the technology was still largely seen as a novelty. Headsets were set up in the café-bar at Watershed for punters to casually ‘have a go’. Virtual reality isn’t a theme-park ride, though, so that’s not a satisfactory setup, long term. That said, I’d argue that the films edge closer to simulation than representation.

The blueprint for VR as a cinematic format became a real-world reality last year when Amsterdam opened the world’s first dedicated Virtual Reality cinema. As early adopters of Betamax and LaserDisc will tell you, it pays to hold out until the industry has its preferences sorted, so most exhibitors have yet to provide ‘screening rooms’ for VR. However, this year VR was given a dedicated event space at Encounters, where the content was curated and programmed at specific session times, just like its flat-screen films.

Festivalgoers arrived to watch rather than try VR in sessions that were closed to passersby and accommodated groups of up to 30. But the space wasn’t quite right. As we filed in, the person behind me blurted out, “It looks like a café for lonely people.” He wasn’t wrong; unlike auditorium seating that knits viewers in line, the VR seats were carefully spaced out: each viewer seated alone. Still, if cinema is the collective act of watching something in the dark – in the same space at the same time – then this offering came close.

The greatest challenge comes from isolating two major senses, sight and hearing. This allows knowledge rather than an awareness of the collective experience at play. Unlike in the traditional cinema space, there’s no real-world peripheral vision; you won’t be able to notice another person physically recoil or shift in their seats, nor will you hear them gasp or giggle in unison when something surprising happens. One potential option would be collective sound – if individual earphones were removed and the audio was pumped into the space, sensory awareness of fellow VR-goers would follow. For now, the most collective moment is when you remove the VR headset and earphones at the close of the session – this mirrors the effect of the house lights fading up in an auditorium.

Despite some impressive attempts, VR fails in its endeavour as a cinematic form when it comes to the body. Still working out where to position the viewer’s perspective within the 360-degree immersive world, many of the films seemed to forget or ignore implications for user embodiment when choosing the placement of their camera. What’s simpler about flat-screen cinema is that no matter where the camera is placed, the audience has a static position from which to engage with it. Here, the position is somewhere inside the image, yet most films do not give the viewer a body within that world. Instead, the embodied experience is one of twisting and swivelling in real-world seats, outside of the experience.

For the one film that did give its audience a body, the results were dire. Avril Furness’s The Last Moments (2016) attempts to place the viewer in the position of a person undergoing assisted suicide. Ethical implications aside, the technology fails on a practical level. Watching 360-degree filmic VR allows the viewer freedom of visual movement within the space: it is possible to look behind your body, in an Exorcist-style head spin, and even to look down at where your body should be. Here, the artifice of the experience is revealed: atop the body there is no head. Instead, there is a slightly blurred graphic, where the camera has been erased in post-production. These digital blurs, visible in many of the works, constantly break immersion and further disembody the viewer from the experience. 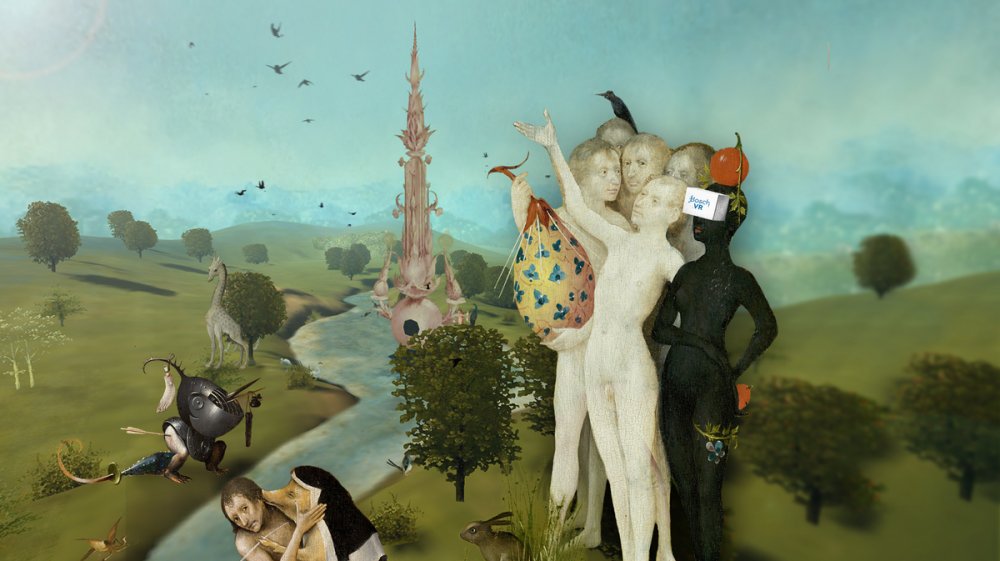 The immersive capability of VR showcased at Encounters was at its best when it was experimental, and when it used computer-generated imagery and animated graphics rather than live action in isolation. John Durrant’s Bosch VR (2016) and Munro Ferguson’s Minotaur (2016) both offer fluidity and movement within the experience, something the live-action films, owing to the necessity of a static camera, cannot achieve. For live action, movement is only possible in the edit or in the viewing; as one image fades into another, cuts rapidly or, randomly at the viewer’s behest as they move their head and adopt an alternative view.

Ng’endo Mukii’s Nairobi Berries (2017), awarded the Immersive Encounters Grand Prix, successfully brought live action and computer-generated imagery together to create a sense of immersive chaos. Performers move through the space in a mesmeric dance as the outlines of three-dimensional prisms and other shapes meet and mingle. The rhythmic movement simulates other sensory delights; the taste of berries explodes on to screen in lurid colour and the touch of feathers brushes past in a haptic blur. Nairobi Berries positions the viewer as within but still outside of the art it creates, enabling an encounter instead of an experience. 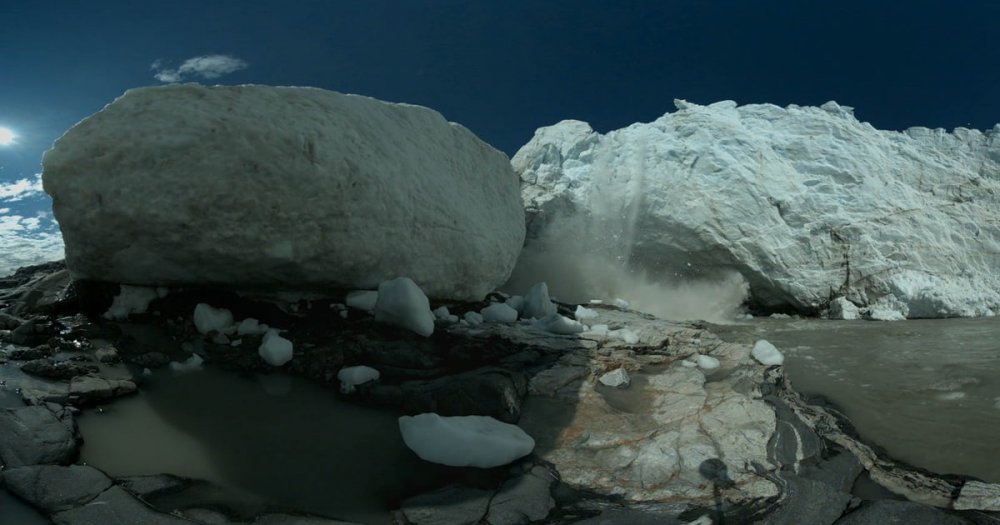 Danfung Dennis’s Melting Ice (2016) also allows the viewer to sit inside the experience, in a style that recalls IMAX 3D’s educational documentaries. Far-reaching worlds such as deep space and underwater kingdoms are most successfully explored in this format, and here Al Gore takes viewers out on the melting ice caps, offering the alarming experience of seeing climate change close-up.

VR isn’t an entirely cinematic experience yet but, as Allen predicts, its boom time will only come after the current “trough of disillusionment” runs its course. Technology writer Bill Thompson echoes her views, suggesting VR might also have to weather the inevitable “moral panic” that comes first. For now, virtual reality is reaching out in every direction, even if it’s not quite sure what to do about the bodies it touches.