Horror gets real: the limits of fantasy at FrightFest 2019

For many, horror is defined by the fantastic: those monsters or supernatural elements that serve as in-your-face avatars of a more elusive or allegorical subtext.

This year’s FrightFest – the 20th since the festival’s inception in 2000 – certainly admits through its creaking doors all manner of fantasy: the medical vampirism of Cronenberg’s original Rabid or the Soska sisters’ new reimagining; the domestic demonology of Chelsea Stardust’s Satanic Panic, Matt Bettinelli-Olpin and Tyler Gillett’s Ready or Not, Josh Lobo’s I Trapped the Devil or Brian Hanson’s The Black String; the clairvoyance of Tony Dean Smith’s Volition or Magnus Wake’s Dark Sense; the alien interventions of Jason Axinn’s To Your Last Death, Bobby Miller’s Critters Attack! or Carl Stathie’s Dark Encounter; the Frankenstein’s monster of Larry Fessenden’s Depraved; and the spectres of Travis Stevens’s Girl on the Third Floor, Chad Archibald’s I’ll Take Your Dead or John Adams and Toby Poser’s The Deeper You Dig.

Yet there has long been a strand of the genre that eschews fantasy, preferring to focus on purely human horrors and our own innate or acquired potential for depravity, delusion and destruction. This is where the genre gets real, tackling social, psychological or political anxieties directly, without any need for the filter of ghostly metaphor.

Maybe it is because there are horrors enough in the world right now for filmmakers not to have to invent their own, or maybe it is a reaction to the fanciful escapism of current cinema’s Disney-dominated mainstream, but right now a lot of fantasy-free horror is being made, and that is reflected in its ample representation at FrightFest 2019, including the festival’s opening and closing films (Come to Daddy; A Good Woman Is Hard to Find). Of course mileage may vary from one viewer to another as to whether such ‘realist horror’ is really horror at all – but there is no better place to explore what constitutes a genre than at its boundaries. Here are ten of my favourite films of this kind from this year’s festival.

“Trust me, you’ve got no fucking idea what’s happening here,” Norval (Elijah Wood) is told when he arrives at his estranged father’s ‘UFO’-like cliffside home. Those words apply to the viewer too, as this directorial debut (and FrightFest opener) from indie horror producer extraordinaire Ant Timpson (The ABCs of Death, Turbo Kid, The Field Guide to Evil) itself proves to be something of a UFO (albeit without any actual aliens).

It begins with urbanised manchild Norval on a quest for lost identity and legacy as he attempts to reconcile with the daddy who abandoned him aged five – but the aggressive macho drunkard (Stephen McHattie) who greets him at the door seems confused as to why he summoned his son there in the first place.

As the plot thickens and the genre keeps shifting, this will turn out to be a funny, violent, increasingly unhinged caper of simple men (including Martin Donovan, of Simple Men) and bad dads (featuring Michael Smiley from Kill List, also about errant paternity). Poor Norval will never be the same again.

A Good Woman Is Hard to Find 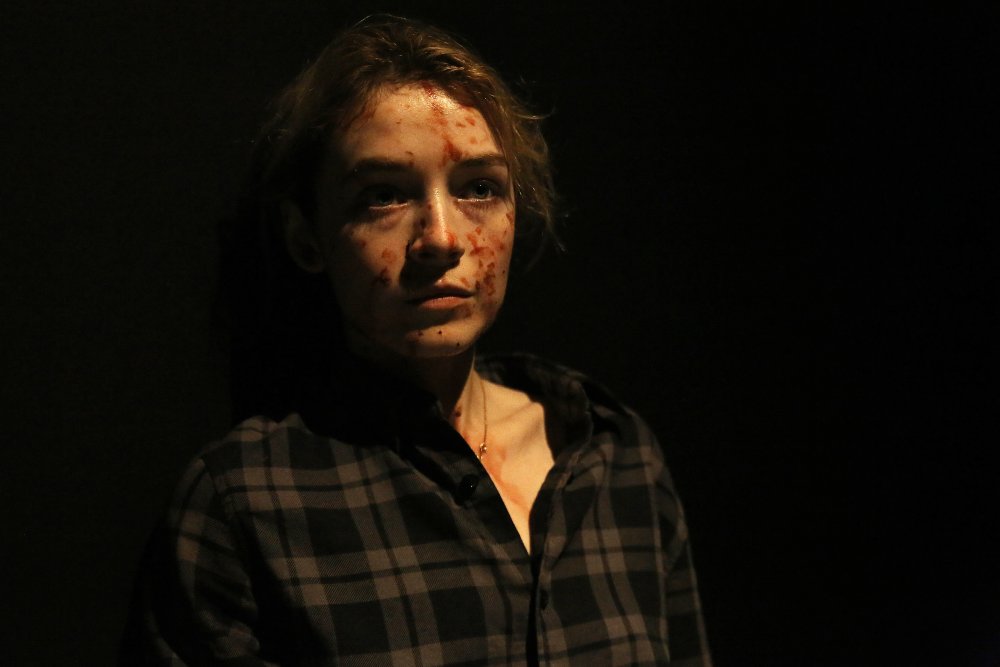 Much as Ken Loach’s films like Ladybird Ladybird and I, Daniel Blake arguably deal in contemporary social horror, Abner Pastoll’s ‘real horror’ festival closer is Loachian in theme (deprivation, marginalisation) and setting (a crime-ridden Belfast estate). There, widowed Sarah (an electrifying Sarah Bolger) struggles to keep her two young children safe after their home is ‘cuckooed’ by local drug dealer Tito (Andrew Simpson). Gradually, Sarah will transform from meek victim to daring agent, finding the good woman within, without ever quite stepping beyond the limits of her naturalistic circumstances.

Sarah remains an utterly credible character, while psychotic/pedantic gangster Leo (Edward Hogg) keeps pushing the narrative towards genre-bound excess – even as Pastoll’s multicoloured lighting scheme is more suggestive of giallo or neo-noir than sink estate drama. This is a delicate dance, testing the neighbourhood boundaries between straight-up realism and genre’s more sensationalist tropes of survival and revenge, while dramatising truths about the systemic marginalisation and oppression of impoverished women. 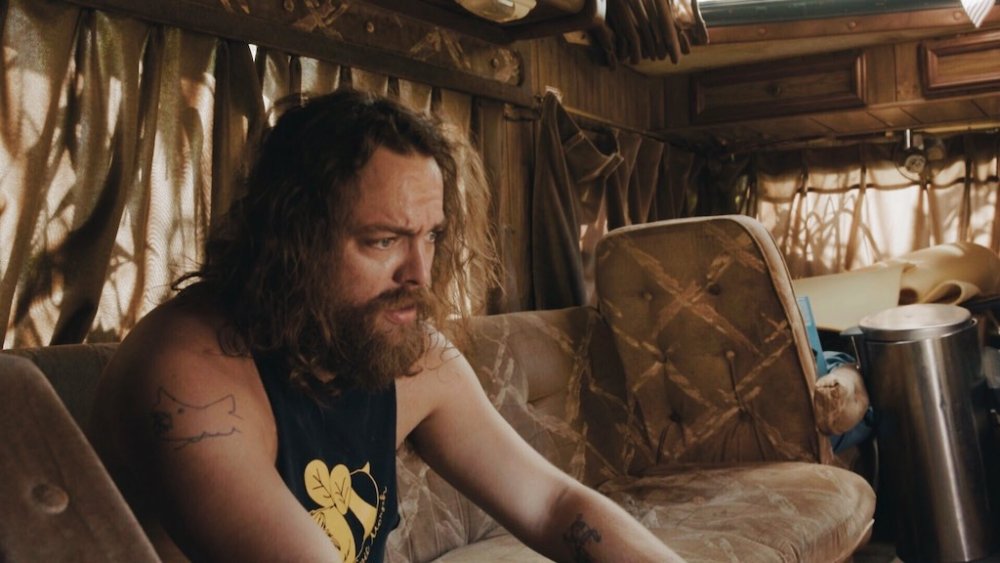 In Ortiz’s mannered film, the only monster is fear. Amanda (Sabina Friedman-Setz) suffers crippling phobias about other people’s perceived bodily imperfections. Meek programmer Walter (Stan Madray) is terrified of the two masked men who keep visiting his home and, for no obvious reason, cutting off his fingers. As Amanda seeks self-help advice for her anxieties from a quack therapist (Michael Richardson), her delusions will gradually spread like an infection to others like Walter, creating a criss-crossing narrative of Coen-esque confusion.

The presence here of actor Michael St. Michaels, familiar from Jim Hosking’s The Greasy Strangler, fixes the deranged tone of Ortiz’s film. As Amanda sets out to destroy her monster, on a manic journey of staged encounters, personal interventions and violent recovery, Fingers becomes a strange satire of both therapy culture and a pathologised America succumbing to psychosis as it chases its own tail on the quest for a redemptive cure.

There is, as they say, no place like home. Maria José (Valeria Giorcelli) and her brother Jesús (Pablo Sigal) have been living in the same Argentine apartment since childhood, and now, as arrested adults, continue to engage in childlike game-playing and fantasy, inspired largely by Maria’s obsession with The Wizard of Oz. Yet with the death of their father, estranged older sister Magdalene (Agustina Cerviño) returns from Spain to oversee the sale of the apartment, and ends up a crippled captive to the siblings whose infantilised idyll she threatens.

Named for an elimination game whose three elements are essentially incompatible and mutually destructive, Macarena García Lenzi and Martín Blousson’s claustrophobic, darkly comic thriller recalls Grey Gardens (1975), Misery (1990), Braid (2018) and especially Shrew’s Nest (Musarañas, 2014) in showing a dangerous domestic dysfunction that, for all its unhinged exaggeration, may strike a dissonant chord with anyone who has family.

Set in the ‘community’ of Harrison Homes, this feature debut from writer-director Cameron Macgowan shows how little would be required to unravel the supposedly civilised fabric of America’s middle-class suburbia. As Melanie Edwards (Dawn Van de Schoot) and her two children settle into their new house on “just another boring morning”, red letters mysteriously arrive at every door, instructing each resident to kill a named neighbour, or risk being killed themselves. This quickly triggers paranoia and brings petty resentments bubbling to the surface, and pretty soon, as game theory sets in, a murderous chaos descends upon the entire block.

Taking its cue from The Purge (2013) and Assassination Nation (2018), this grimly allegorises a country all too easily polarised against itself, street by bloody street. For once those letters have arrived, everyone goes postal.

Its very title advertising that strange nexus between fantasy and reality, this twisty thriller traces the complicated engagement between reclusive, washed-up horror novelist Caleb Conrad (Jason Cassini) and aspiring writer/‘number one fan’ Avery Malone (Sara Garcia) – whom he has hired as assistant in his isolated residence. Since both conceal agendas, and there appears to be someone else (or more) with them in the house, hard lessons will be learned about the nature of the creative process, the inspirations for horror and the role (play) of celebrity in artistic endeavours.

Itself apparently inspired in part by Michael Powell’s Peeping Tom (1960) and Rob Reiner’s Misery (1990), Braden Croft’s film explores the boundaries between fear and fiction, authority and imposture. The tense interplay of writer and Muse offers constant reflexive commentary on the way in which horror is at its most effective when it gaslights, manipulates and misdirects before revealing its true face. And there’s not a ghost in sight – unless ghostwriters count.

While Jarvis claims fearlessly to expose uncomfortable truths about the nation’s political class, he adopts an altogether more postmodern, subjectified attitude towards truth when it comes to the details of his own life. His willingness to cover up and lie, his verbal gaslighting and bullying and his ability to keep rising to the top no matter what horrors emerge from his history make Jarvis a very Trumpian brand of human monster – and in case the point is missed, Trump himself is duly name-checked over the course of the film. The grim reality here is fake news.

Starting with an unusual (if plausible) premise, Gridley privileges script and performance over whizz-bang effects, staging a claustrophobic drama – with a high body count – in which everyone’s ethical emptiness is brutally played out. Meanwhile Al Anderson and Bennett’s Morricone-esque score marks Criminal Audition as a revisionist oater whose showdowns are staged as pure theatre.

Why Don’t You Just Die!

This is a confidently mounted blur of different filmmaking styles, ethical codes and generational clashes that welcomes the viewer to laugh, wince and gawp at its messy excess, while cheering on a young antihero who surely cannot survive his ordeal to the end. Realistic it is not – but the only monsters here are larger-than-life humans.

My favourite film at this year’s FrightFest, writer-director Jennifer Reeder’s Knives and Skin is difficult to categorise, except in negatives. Full of mostly pink colour-coding, hyperreal lighting, flamboyant costumes and eccentric characters, it is too stylised to be called realistic. Despite its title and an opening sequence that seem to promise giallo or a psychothriller, it hardly meets many, even any, of the standard criteria for horror.

It is like TV’s Twin Peaks, but without the central murder mystery. It is like Sam Levinson’s Assassination Nation, but without the defining ultraviolence. If it seems wispy and ethereal and elusive, that is because absence lies at its very core. Like Laura Palmer, 15-year-old Carolyn Harper (Raven Whitley) dies by the water in a small town – but unlike Laura’s body, Carolyn’s stays there, undiscovered for many days, while the community of Big River struggles to cope with not knowing where she is or what has happened to her.

This is a story of one missing girl and several lost ones, as Carolyn’s classmates and their families try to navigate their way through a modern American landscape ever littered with the debris of patriarchy, and to find new ways of singing old (specifically 1980s) tunes. It is a magical realist panorama of a nation still coming of age and to terms with itself, while longing for the possibility of change or escape. Rich and strange, funny and profound, this dreamy film conjures the ghosts of an irrevocable past and the shimmering mists of an uncertain future.