David Lean’s much maligned adaptation of a true-life 19th-century murder case, with Ann Todd as a woman accused of poisoning her lover, is a slippery melodrama whose upper-class trappings mask a subversive rape-revenge core. 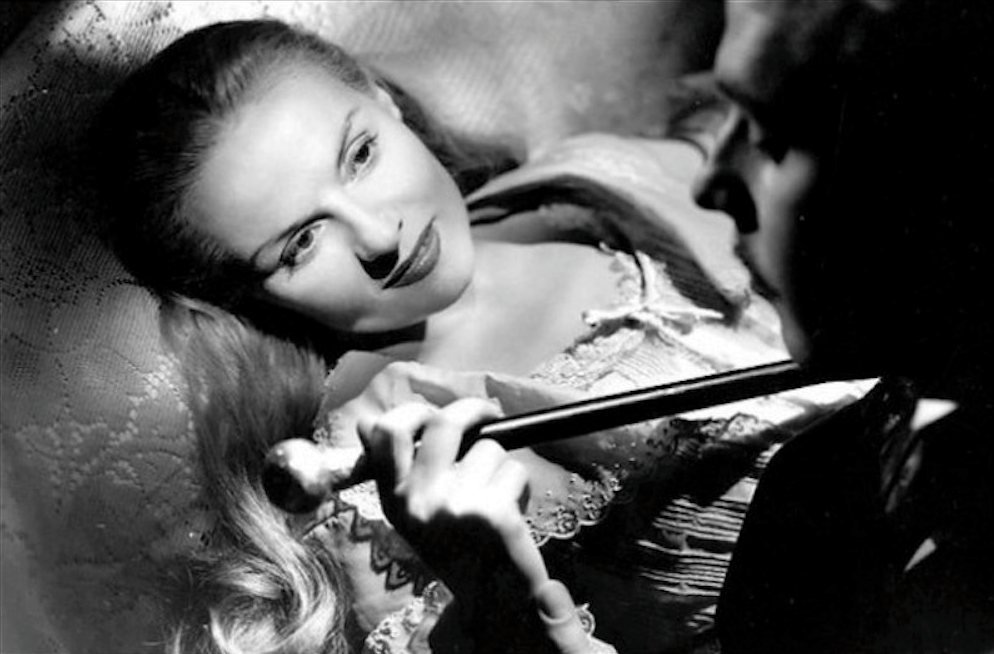 Madeleine (1950) is generally regarded as one of David Lean’s rare failures, with even its creator insisting “Madeleine was the worst film I ever made.” Yet it seems to me not only among Lean’s richest works, but also a key title in the history of British cinema.

Madeleine is available on DVD and via BFI Player.

Madeleine tells the (mostly) true story of Madeleine Smith (Ann Todd), a young Scottish woman who, in 1857, was tried for having poisoned her lover, Emile L’Anglier (Ivan Desny). The jury eventually declared this charge ‘not proven’.

If the real Madeleine Smith spent the rest of her life in an indeterminate space midway between innocence and guilt, the film based on her trial occupies an appropriately analogous position, existing in a state of constant tension with the culture that produced it. Madeleine’s complexity derives from its refusal to be confined within the boundaries of a specific national cinema, and it is hardly surprising that Lean would soon start working on the international stage.

There are echoes here of film noir and women’s melodrama, particularly those titles which, as Andrew Britton writes in the Movie Book of Film Noir, feature “female protagonists whose very monstrousness allows the director to propose a critical analysis of the social conditions which have channelled powerful energies and a formidable intelligence into destructive, and self-destructive, forms”. 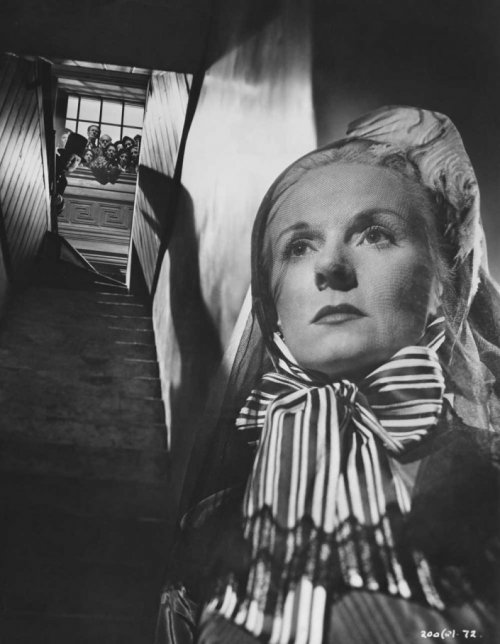 Like the protagonist of Lean’s Lawrence of Arabia (1962), Madeleine’s determination to act in the best interests of British society causes her to embrace a course of action which will bring her into direct conflict with that society. T.E. Lawrence’s effort to resolve his personal dilemma by burying it within a larger national one is doomed to failure, the ‘clean’ desert ultimately revealing to him precisely those ‘dirty’ masochistic and homoerotic aspects of his personality he had hoped to escape. Madeleine’s dilemma is of a similar kind, her attempt to avoid having her sexual relationship with Emile made public leading to that relationship being exposed on a much wider scale than she could possibly have imagined.

The notion that one can only be a good bourgeois by committing murder is positively Hitchcockian, and like Hitchcock, Lean seems to have been influenced by Freudian theory; he had been undergoing psychoanalysis since 1947, and saw much of his imagery as derived from Freud. Kevin Brownlow’s David Lean (Faber and Faber, 1996) quotes the director’s secretary Mary Benson as saying: “He told me that he used some of these (Freudian images) in Madeleine. L’Angelier drops his walking stick when he and Madeleine have a love scene on the floor. This was meant to indicate an orgasm.”

Madeleine’s phallic imagery is indeed overt, and strikingly recalls the passage from Charles Dickens’ Great Expectations (a book Lean adapted for the screen three years previously) in which Joe Gargery talks about his youth to Pip while compulsively manipulating a poker, whose “round knob” he uses to rub his eyes. Joe’s association of the poker with his childhood implies that the abuse he suffered was both violent and sexual, and in one of the novel’s most extraordinary passages, he claims that when his father “were overtook with drink, he hammered away at my mother, most onmerciful. It were a’most the only hammering he did, indeed, ’xcepting at myself. And he hammered at me with a wigor only to be equalled by the wigor with which he didn’t hammer at his anwil. – You’re a listening and understanding, Pip?”

Madeleine’s problems are caused by both her father and her lover, and though these men (who never meet, at least onscreen) detest each other, they represent two sides of the same coin. The nature of Emile’s desire is suggested by the gesture with which, upon entering the hallway of the Smith home, he thrusts his cane into a receptacle containing several canes owned by Mr Smith. Emile wishes to marry Madeleine because doing so will give him access to the world of the bourgeoisie while simultaneously identifying him as a phallic male; she will be living proof that he is a successful Oedipal challenger who has taken the patriarch’s prize possession. The essential point about these characters is made by the images introducing them: Madeleine is first seen juxtaposed with a ‘for sale’ sign, while Emile announces himself via his twirling cane. 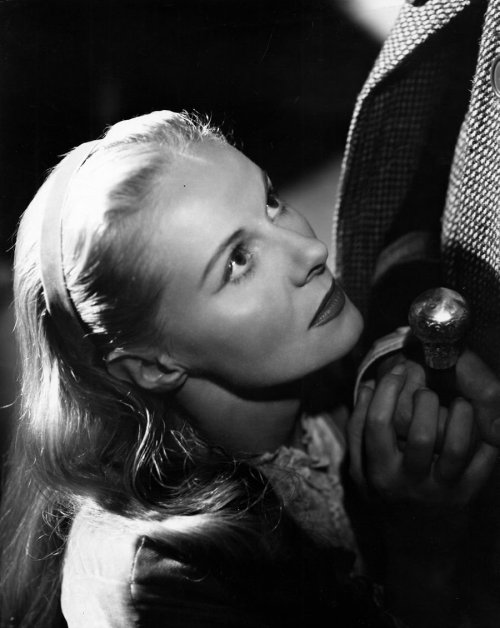 This cane is central to the film’s most astonishing scene, which shows Madeleine leading Emile to an isolated spot overlooking a village. Hearing music playing in the distance, Madeleine begins dancing, begging Emile to join her. Emile is initially reluctant (“Here?”, “I do not know how”), preferring to watch Madeleine while repeatedly tapping his cane against his palm.

As Madeleine draws Emile into the dance, she abruptly takes hold of his cane (“You can’t dance with that in your hand”) and throws it away. Angered by this, Emile violently grabs Madeleine’s wrist. As her appropriation of the cane (symbolically an act of castration) suggests, Madeleine’s insistence on initiating a sexual act problematises Emile’s possession of the Phallus, and it is only after reestablishing his masculine dominance that he can make love to her.

Nor is Emile portrayed as an isolated case, an unusually bad example of masculinity. His apparent ideological opposite, Madeleine’s wealthy fiancé William Minnoch (Norman Wooland), appears to exist outside this nexus of power relations, but is deeply implicated in them; Emile’s use of the receptacle in the Smiths’ hallway precisely reproduces a gesture made earlier by Minnoch (though there is no way Emile could have known this), while the ring Minnoch gives Madeleine is explicitly rhymed (via its phallic crossbow crest) with Emile’s cane. Minnoch’s veneer of easygoing tolerance, the only thing differentiating him from Emile, is entirely the product of his privileged class position, and proves merely skin deep; when details of Madeleine’s affair are revealed in court, Minnoch walks out and is never mentioned again.

For much of the last third, Madeleine is denied a voice, the arguments that will determine her fate being conducted by male lawyers while she silently observes the proceedings. But all this is merely a set-up for the final shot, in which Madeleine’s silence is redefined as a form of power. While she is being driven away in a carriage, the (significantly male) narrator, who had previously spoken exclusively to the audience, suddenly addresses Madeleine herself: “Madeleine Smith, ye have heard the indictment. Were ye guilty or not guilty?” In response, Madeleine looks directly at the camera, perhaps attempting to suppress a smile. 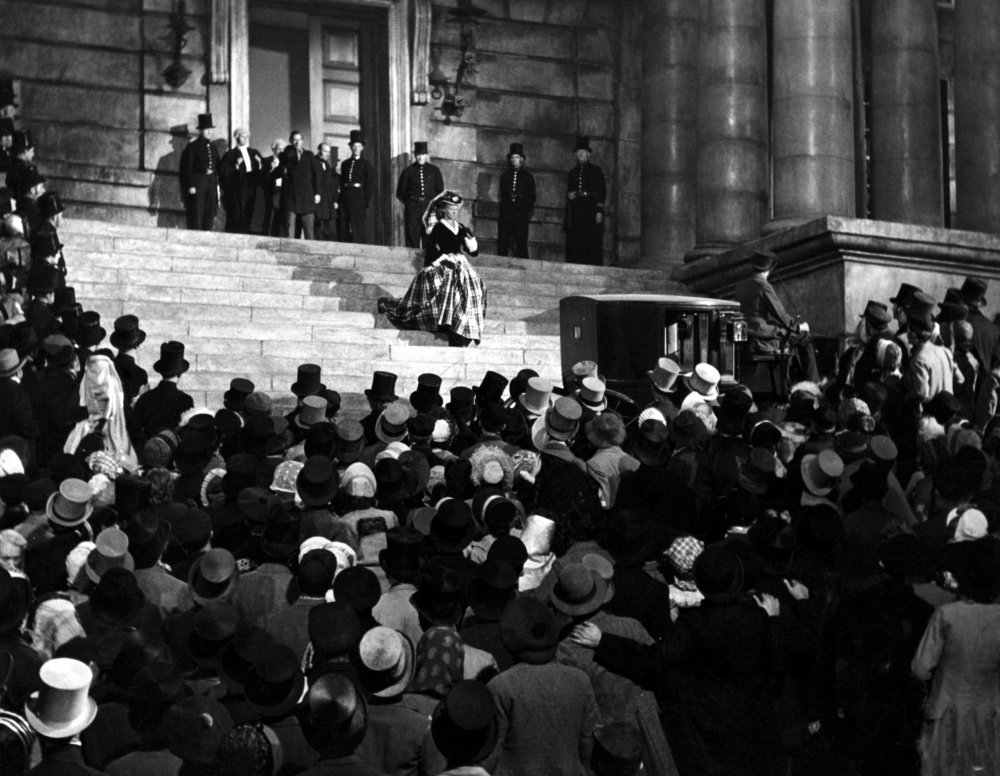 According to Kevin Brownlow’s biography, Noël Coward believed Madeleine’s failure was due to Lean’s uncertainty: “I don’t think that you can make a film in which you, the writer-director, don’t know in your own mind what was the outcome. In other words, did she do it or didn’t she? And you’ve never said. You’ve left it open for the audience to choose and I think that is unsatisfactory.”

Yet Madeleine seems to be reaching towards something quite different from, perhaps even concealed by, this uncertainty. The final act of sexual intercourse between Madeleine and Emile, though described by Mary Benson as a “love scene”, is clearly a rape, the shot of Emile’s cane lying on the floor indicating not an orgasm, but rather the brutal triumph of phallic masculinity. The cut from this to Madeleine’s first attempt (via a servant) to purchase poison is as meaningful as the cut from match to desert in Lawrence of Arabia, the film’s real ambiguity being linked less to the question of whether or not Madeleine killed Emile than to a suspicion that she might have been justified in doing so.

Despite its connections to Lean’s subsequent epics, to Hitchcock, to women’s melodrama, to noir, Madeleine’s deepest secret, hinted at in the heroine’s barely repressed smile, is that it is actually one of those disreputable revenge-for-a-rape movies, such as Meir Zarchi’s 1978 I Spit on Your Grave (whose penultimate shot resembles Lean’s closing image), wherein filmmaker and audience gleefully collude with a female protagonist who takes the law into her own hands and gives her violator his just desserts.

Related to The Freudian revenge of David Lean’s Madeleine