Get the digital edition, buy a print edition or . 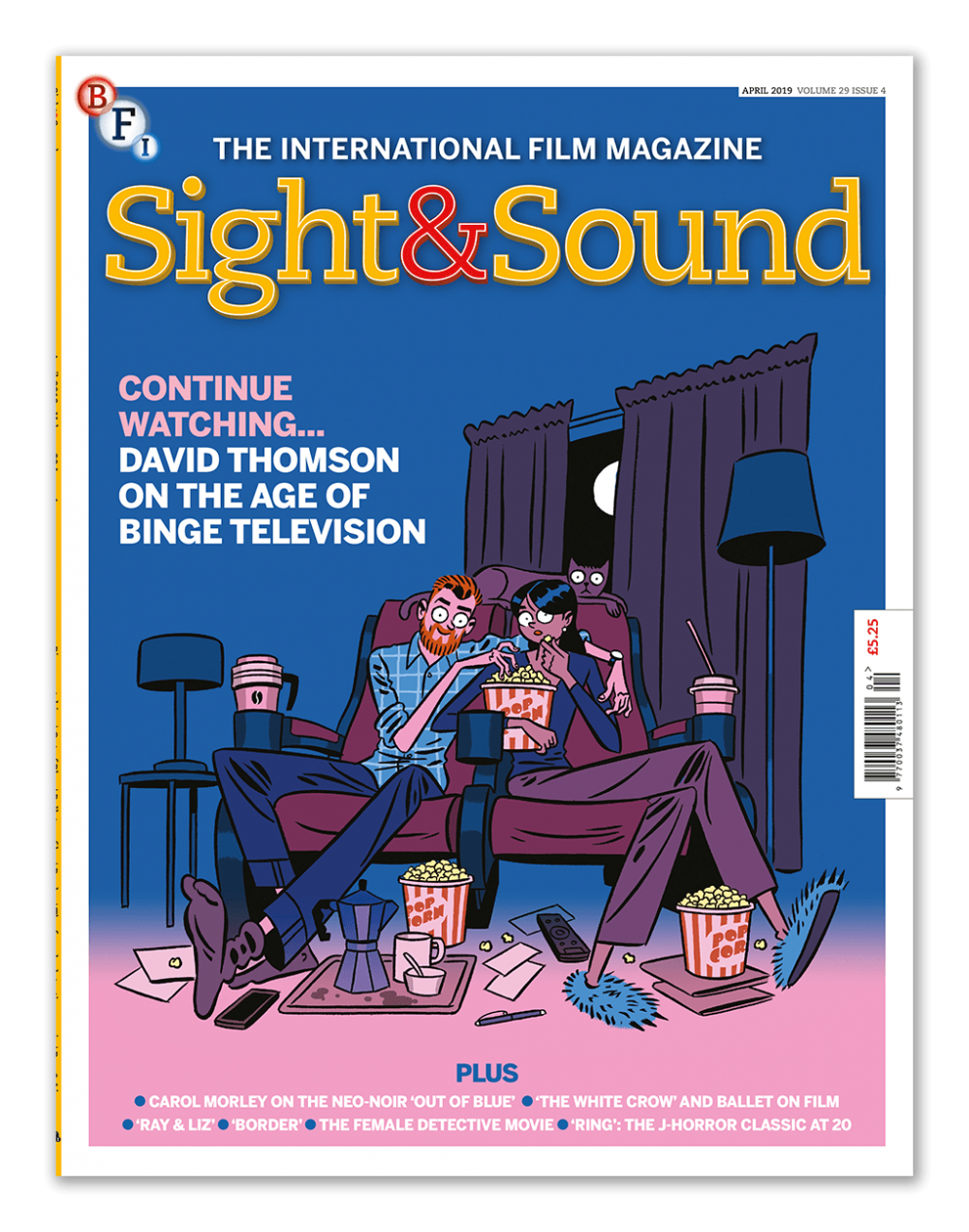 To binge or not to binge? That is one of the key questions of our lives today – at least when we’re sofa-bound at the end of the day. Splurging on TV series has taken over how we consume moving images. And who has the willpower to resist the next episode countdown?

Sight & Sound’s cover feature has a surprise in store for you: an unapologetic convert to team binge is cinephile David Thomson, who in this issue sings the praises of devouring TV series over (gasp) the rarefied big-screen experience. The compulsive, rapturous thrall in which TV shows hold us is something to be celebrated, and the mark of a new age, he argues. He charts his relationship with the thrills of streaming from Breaking Bad to Babylon Berlin, comparing the fervour he feels for them now with his passion for movie-going in South London in the 1940s.

We’re betting you won’t see a stranger film in cinemas this month than the Swedish folkloric fable Border, about a customs officer with preternaturally acute senses. Jonathan Romney talks to Iranian-born director Ali Abbasi about his hugely inventive, barely categorisable feature and the complex issues about identity at its heart.

On the occasion of Ralph Fiennes’s portrait of Soviet dancer Rudolf Nureyev The White Crow, David Thompson explores films that place ballet centre stage. Taking his subject seriously, Fiennes employed former Royal Ballet principal Johan Kobborg as his advisor and cast a real dancer, Oleg Ivenko, as Nureyev. As a result, The White Crow never shies away from underlining the sweat and toil of the classical dance world. Thompson journeys back to cinema’s early days and highlights the directors and their films – from Powell and Emeric Pressburger’s The Red Shoes (1948) to Herbert Ross’s The Turning Point (1977) – who respected ballet and found new ways of deploying cinema’s toolkit to capture it.

Putting a twist on kitchen sink social realism – British cinema’s bread and butter – is photographer turned filmmaker Richard Billingham’s first feature Ray & Liz. The autobiographical film is a finely textured, unsentimental portrait of working-class life in the Black Country, exploring the director’s memories of the hardships and isolation of his childhood and his parents’ lives. “I tried to avoid the tropes and clichés and generalisations of working-class portrayals” says Billingham, talking to Adam Scovell this month. “I shot as much as possible from lived experience to give it a different perspective on that British story.”

Carol Morley’s new neo-noir Out of Blue, about a New Orleans cop investigating the murder of renowned astrophysicist, gave us the perfect excuse to muse on the female sleuth. Imogen Sara Smith investigates women solving mysteries on screen and traces a long history of lady detectives from those little old ladies “who view corpses as agreeable diversions on a par with Sunday crossword puzzle” to those who do double duty as intrepid heroine and woman in peril. More recently, with The Silence of the Lambs’s Clarice Starling and Top of the Lake’s Robin Griffin, she identifies a trend of female detectives with troubled pasts. Alongside, Nick James talks to Morley about her meditative and dreamlike adaptation of the Martin Amis novel Night Train.

Our reviews section covers all the latest important releases, including deep dives into Lukas Dhont’s Girl, controversial for Dhont’s casting of a cis-gendered actor in this coming of age tale of a trans ballerina, and David Robert Mitchell’s Hollywood mystery Under the Silver Lake. Other films reviewed include Steven Soderbergh’s Netflix basketball drama High Flying Bird, the skate documentary Minding the Gap and Asghar Farhadi’s kidnap drama Everybody Knows.

Turn to our Home Cinema pages for an exploration of cinema as archaeology in Bill Morrison’s Dawson City: Frozen Time and Ross Lipman’s Notfilm plus a consideration of Nakata Hideo’s J-Horror classic Ring 20 years after its first release.

That’s not quite all folks: elsewhere Ken Loach details his favourite cinema, the fiercely independent Phoenix in East Finchley; Pamela Hutchinson explores the heyday of the American film serial; Nick James surveys the hits and misses from the Berlinale and Kieron Corless reports from Rotterdam; Thirza Wakefield pays tribute to Albert Finney and Jamie Dunn unpicks how Arthur Penn’s Night Moves captures the uncertainty of the Watergate era. 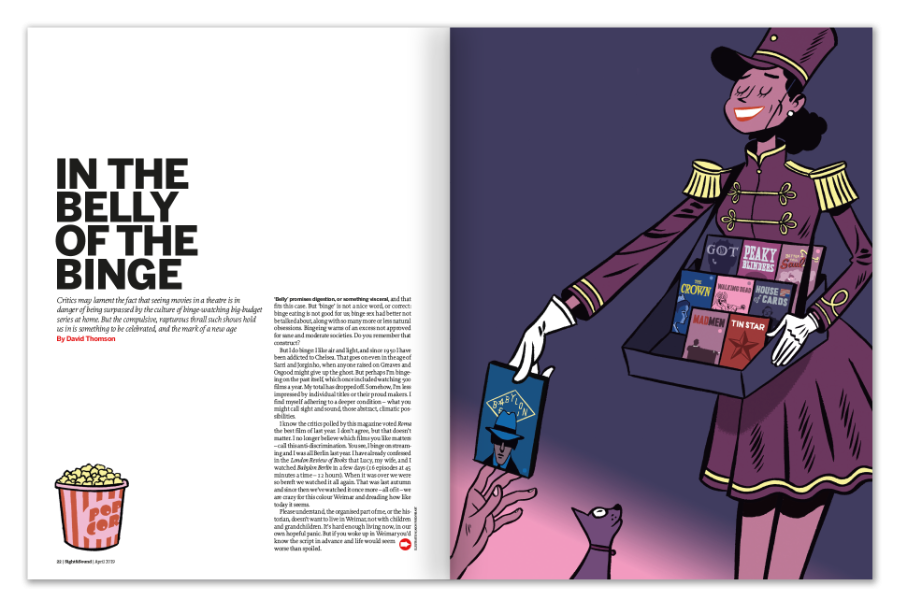 In the Belly of the Binge

Critics may lament the fact that seeing movies in a theatre is in danger of being surpassed by the culture of binge-watching big-budget series at home. But the compulsive, rapturous thrall such shows hold us in is something to be celebrated, and the mark of a new age. By David Thomson.

Netflix has ripped up the rules around release strategies, scheduling and syndication, and is helping change the way we consume TV. By James Bell. 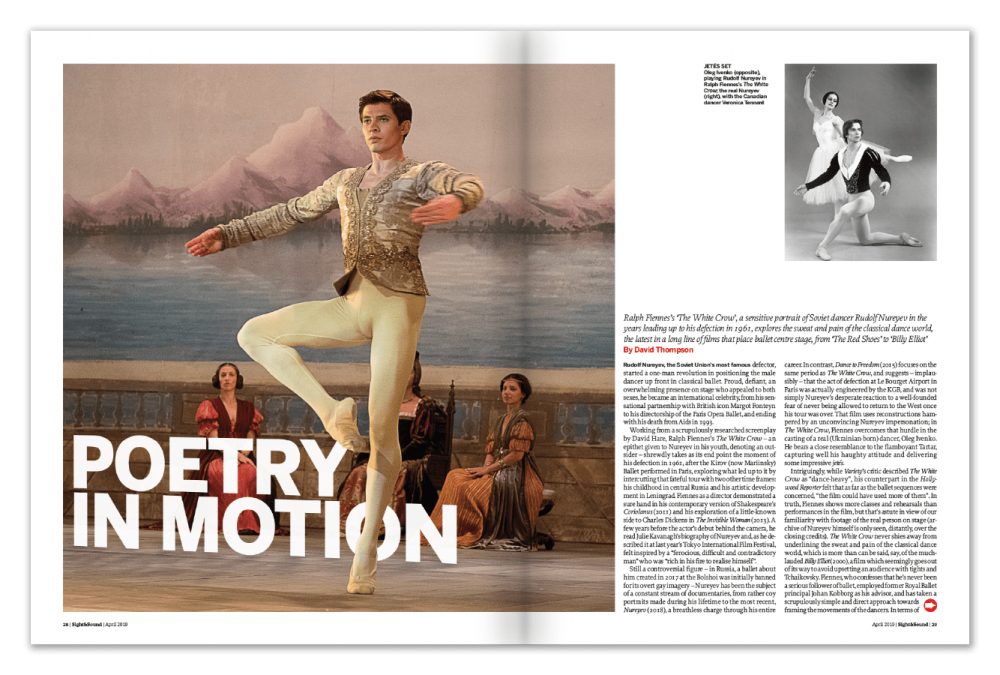 Ralph Fiennes’s The White Crow, a sensitive portrait of Soviet dancer Rudolf Nureyev in the years leading up to his defection in 1961, explores the sweat and pain of the classical dance world, the latest in a long line of films that place ballet centre stage, from The Red Shoes to Billy Elliot. By David Thompson. 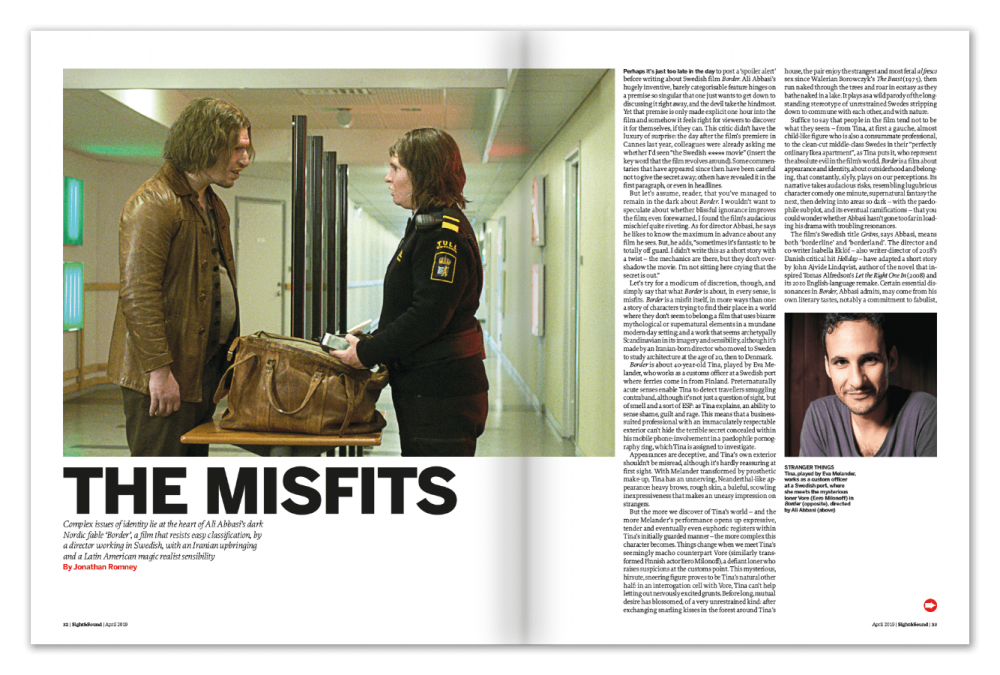 Complex issues of identity lie at the heart of Ali Abbasi’s dark Nordic fable Border, a film that resists easy classification, by a director working in Swedish, with an Iranian upbringing and a Latin American magic realist sensibility. By Jonathan Romney. 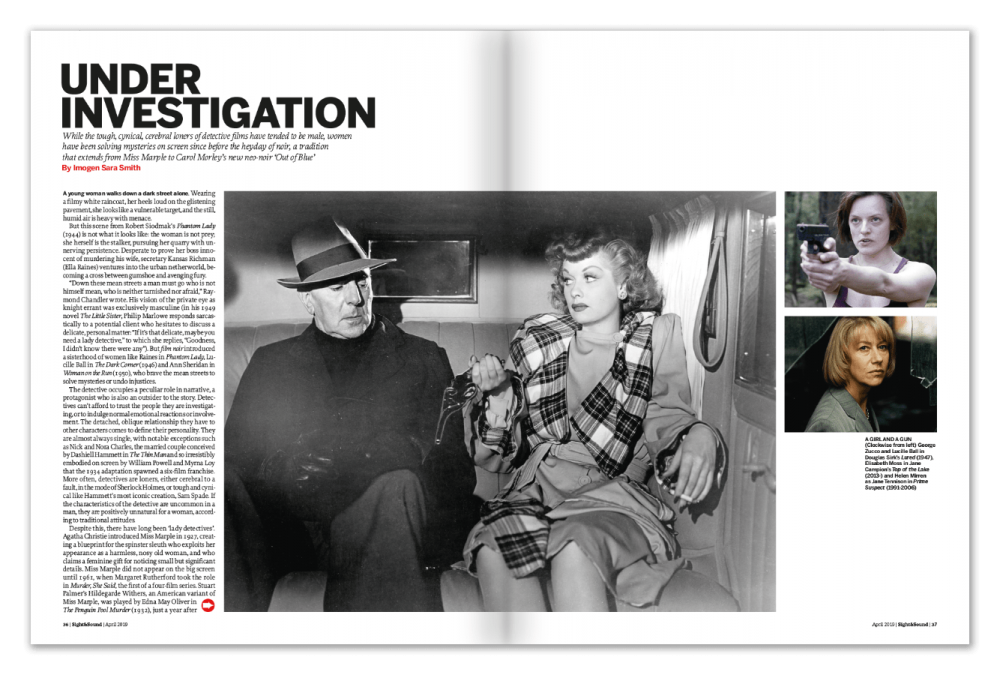 While the tough, cynical, cerebral loners of detective films have tended to be male, women have been solving mysteries on screen since before the heyday of noir, a tradition that extends from Miss Marple to Carol Morley’s new neo-noir Out of Blue. By Imogen Sara Smith.

Carol Morley’s Out of Blue taps into classic film noir and TV cop series in a dizzying exploration of murder, metaphysics and quantum mechanics. Interview by Nick James 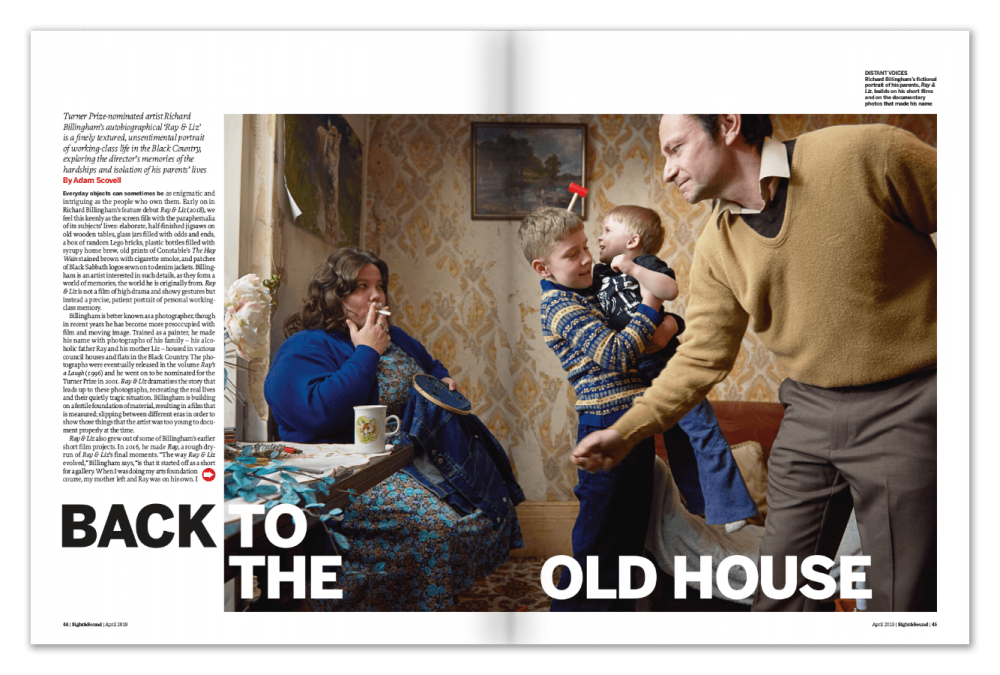 Back to the Old House

Turner Prize-nominated artist Richard Billingham’s autobiographical Ray & Liz is a finely textured, unsentimental portrait of working-class life in the Black Country, exploring the director’s memories of the hardships and isolation of his parents’ lives. By Adam Scovell.

Pauline Kael and Agnès Varda side by side Poetry in Motion: contemporary Iranian cinema, plus what to visit, buy, read, stream and listen to.

An actor noted for his incredible generosity of spirit, he will always be fondly remembered for his role in Saturday Night and Sunday Morning. By Thirza Wakefield.

The I, Daniel Blake director salutes a historical treasure, which has recently resisted the homogenising threat of a corporate takeover. By Ken Loach.

The numbers: the awards season

The Favourite seized the crown at the box office during awards season, but 2019 has been notable for lacking other obvious big films. By Charles Gant. 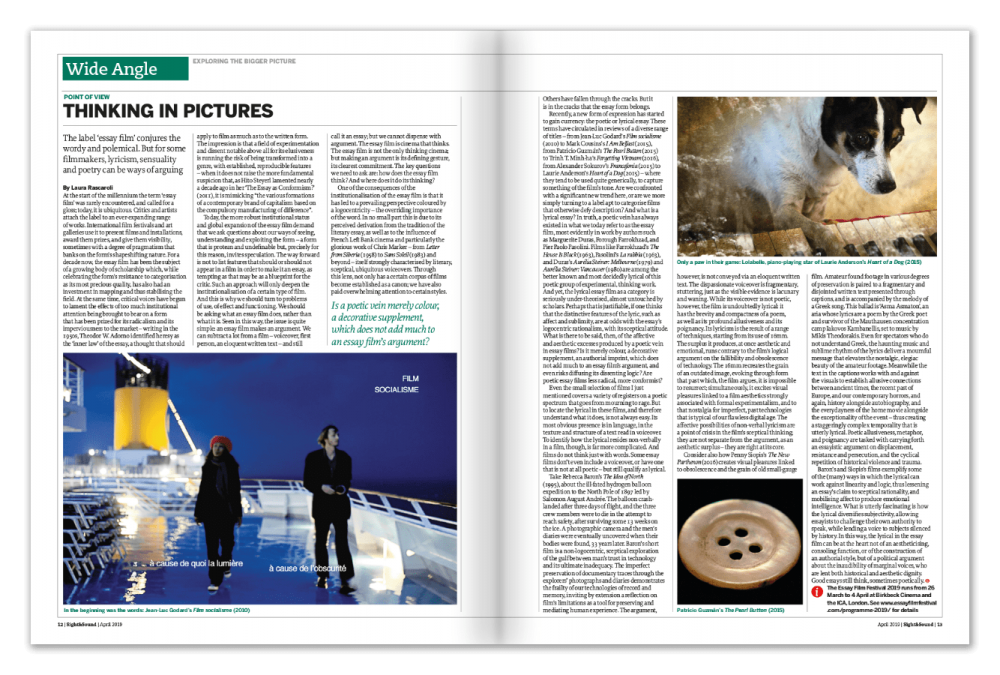 Point of view: Thinking in pictures

The label ‘essay film’ conjures the wordy and polemical. But for some filmmakers, lyricism, sensuality and poetry can be ways of arguing. By Laura Rascaroli.

Primal screen: In the loop

Early cinema’s fascination with the serial form has left an enduring legacy, influencing many of today’s action and superhero franchises. By Pamela Hutchinson.

Even when dealing with enclosed, intellectual or abstract subjects, the film works of Dora García offer the viewer a dose of reality. By María Palacios Cruz. 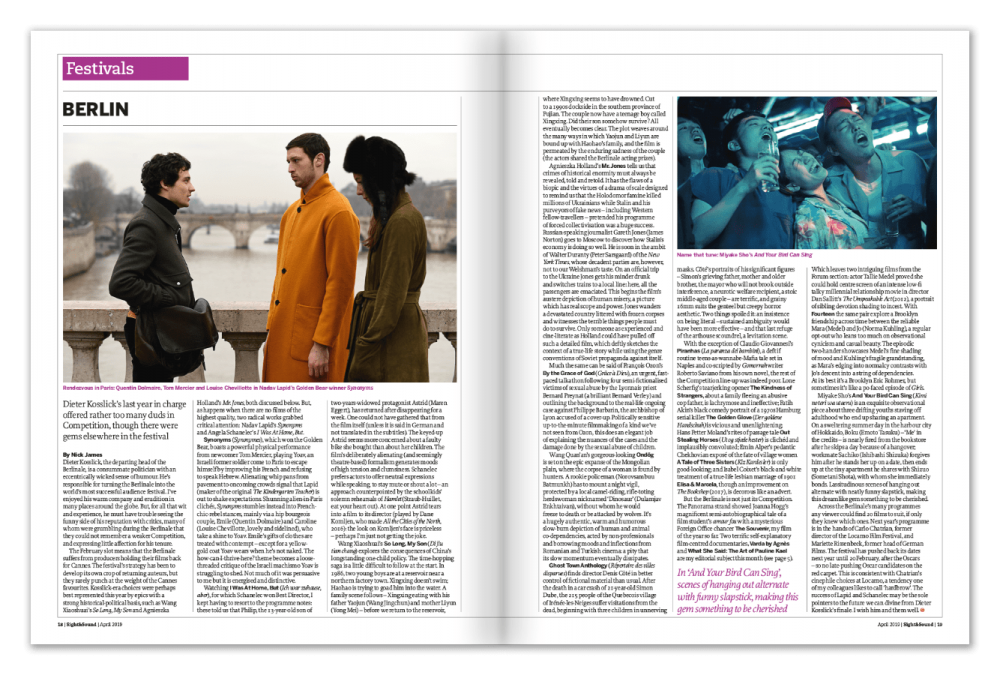 Dieter Kosslick’s last year in charge offered rather too many duds in Competition, though there were gems elsewhere in the festival. By Nick James.

A trio of outstanding films at the IFFR explored the traumas and injustices facing marginalised communities across the globe. By Kieron Corless.

To save and project

The eclectic choice of restorations screening in the archive festival at New York’s Museum of Modern Art was a cinephile’s idea of heaven. By Bryony Dixon. 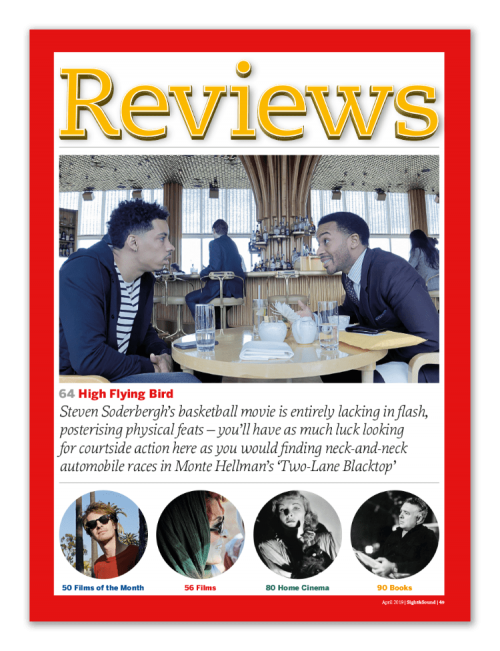 The Aftermath
Alita: Battle Angel
At Eternity’s Gate
Being Frank: The Chris Sievey Story
Benjamin
Border
Burning Men
Cleft Lip
Cold Pursuit
Everybody Knows
Happy Death Day 2U
High Flying Bird
The Hole in the Ground
How to Train Your Dragon: The Hidden World
The Kid Who Would Be King
The Kindergarten Teacher
The Lego Movie 2: The Second Part
Maiden
Minding the Gap
Miss Bala
Old Boys
Out of Blue
Piercing
The Prodigy
Ray & Liz
Rosie
Serenity
3 Faces
A Trip to the Moon
What Men Want
What They Had
The White Crow 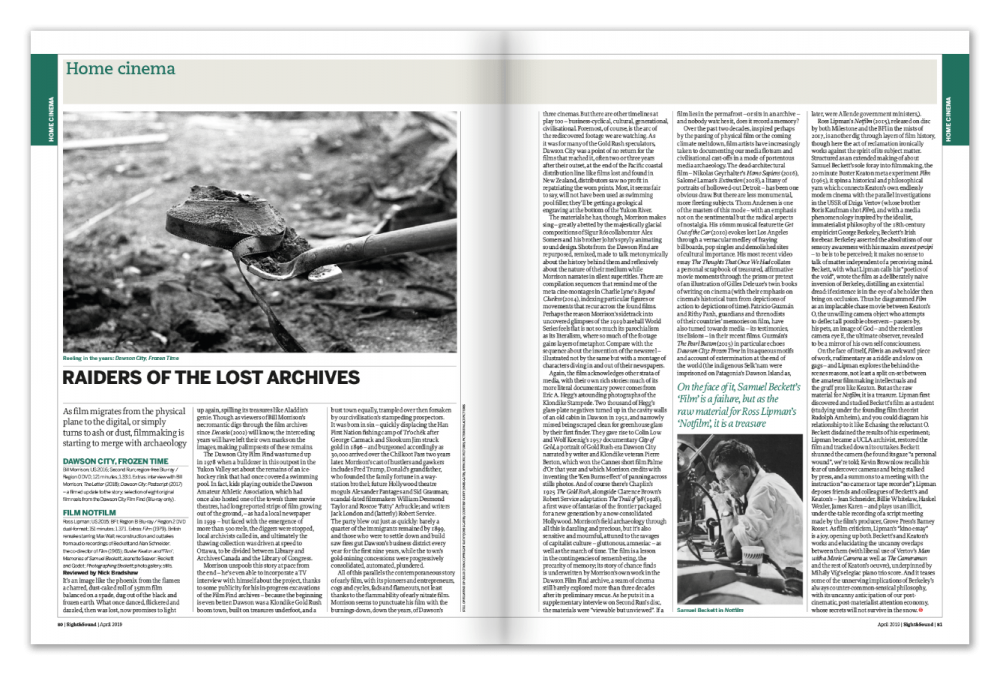 As film migrates from the physical plane to the digital, or simply turns to ash or dust, filmmaking is starting to merge with archaeology. By Nick Bradshaw.

In the final analysis: The Last Movie

Brutally criticised on release, and hardly seen in more than 40 years – does Dennis Hopper’s film maudit live up (or down) to its reputation? By Trevor Johnson.

Technology has moved on since the VCR-based horror of Ring first hit our screens, but the ghost in the machine doesn’t get less terrifying. By Anne Billson.

Too transgressive for Japan, too hard to pin down for the West, Yanagimachi Mitsuo’s film hasn’t found the audience it deserves. By Alex Dudok de Wit.

Peter O’Toole is far more convincing than Walter Pidgeon, the leading man in Fritz Lang’s version; and at least early on, he is more plausibly ravaged.

‘Trust no-one’ is the lesson of the noirish Homecoming, starring Julia Roberts as a case-worker at a shady facility for disturbed military vets. By David Thomson. 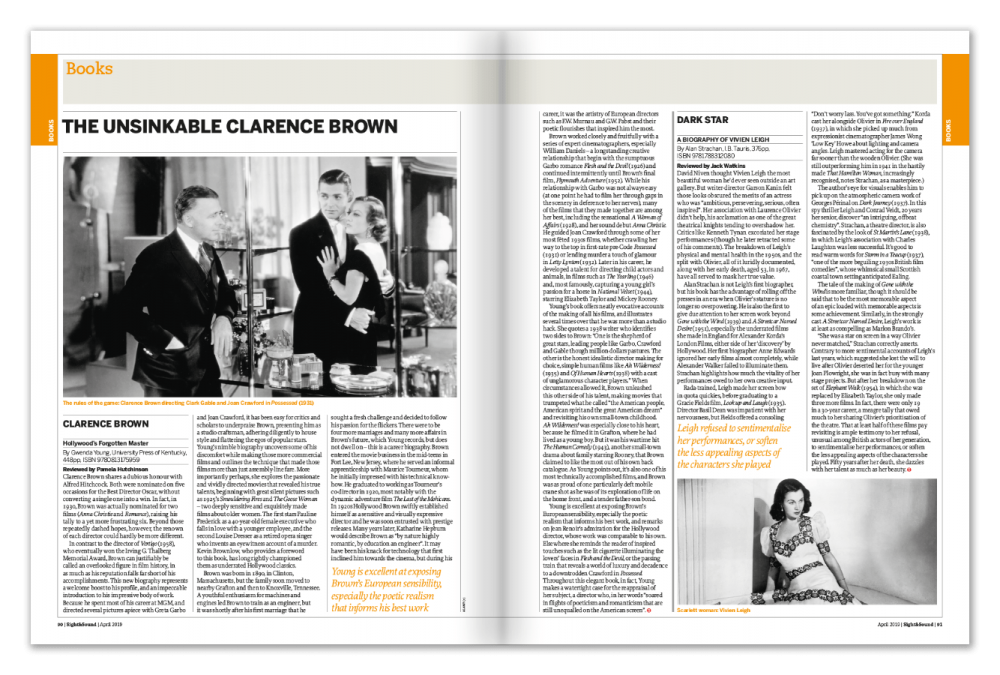 The breaking of Michael Powell’s Age of Consent 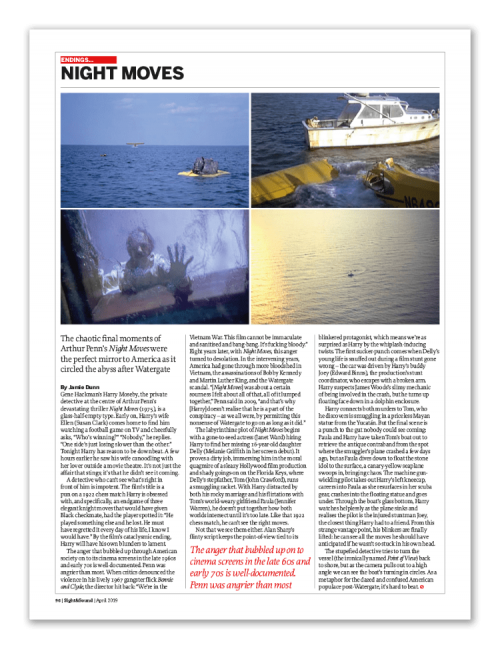 The chaotic final moments of Arthur Penn’s Night Moves were the perfect mirror to America as it circled the abyss after Watergate. By Jamie Dunn.