Willem Dafoe plays the visionary painter as a gnarled and lonesome mystic in the latest of Schnabel’s portraits of tortured greats. 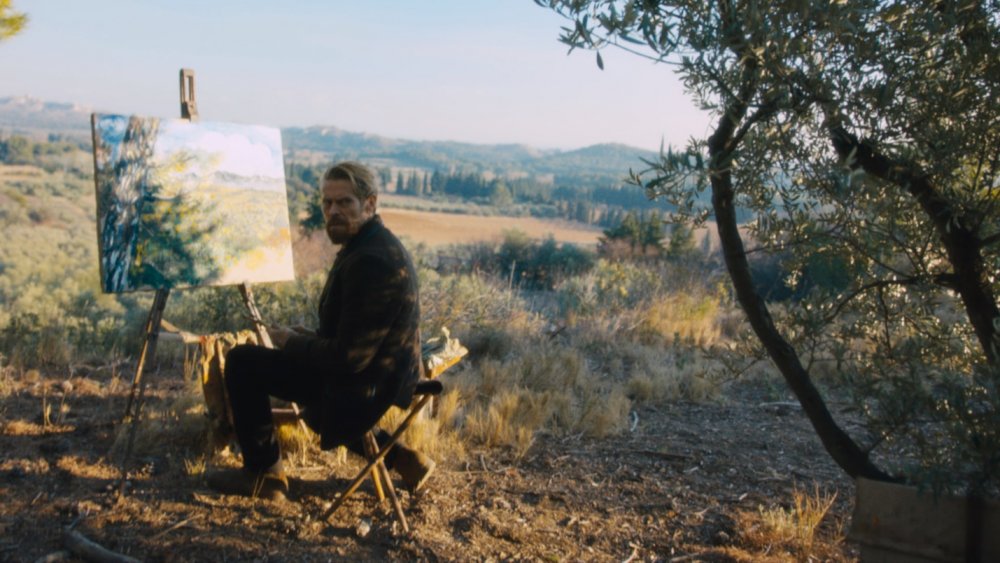 Willem Dafoe as Vincent van Gogh in At Eternity’s Gate

More intimate than the films about Vincent van Gogh directed by Vincente Minnelli, Robert Altman and the married duo Dorota Kobiela and Hugh Welchman, the artist-filmmaker Julian Schnabel’s At Eternity’s Gate attempts, more successfully than most movies that probe the creative process, to get inside the artist’s head, to understand how his thoughts and feelings spontaneously transmitted themselves to the canvas; Paul Cox’s empathetic and impressionistic Vincent (1987) is its nearest analogue. Scored to melancholy minimalist piano and violin music, two sequences showing Willem Dafoe’s van Gogh exploring the Provençal countryside convey his sense of nature’s numinous power, which inspired much of his late work. Shots of him dropping earth on to his face and stretching out his arms in a Christ-like pose border on the bathetic, but also suggest the religiosity in Vincent’s pantheistic fervour, which he later verbalises in his conversation with the priest running the Saint-Paul asylum: “I feel God is nature and nature is beauty.”

The same charged conversation, which launches Vincent into the last ten weeks of his life, underscores the religious theme via his identification with Jesus. Almost mystically cognisant of his future fame, he speculates that God “made me a painter for people who aren’t born yet”, and explains that Jesus wasn’t “discovered” until decades after his death. Whether these sentiments originate in van Gogh’s self-belief or in Schnabel’s desire to let him glimpse his posthumous glory, the director and his co-writers, Jean-Claude Carrière and Louise Kugelberg (Schnabel’s partner and co-editor), qualify them by indicating that the painter was paranoid. Having reminded the priest, stonily played by Mads Mikkelsen, that Pontius Pilate didn’t want to crucify Jesus but was obliged to because “everything Jesus said incriminated him”, he says, “I too have to be careful.” 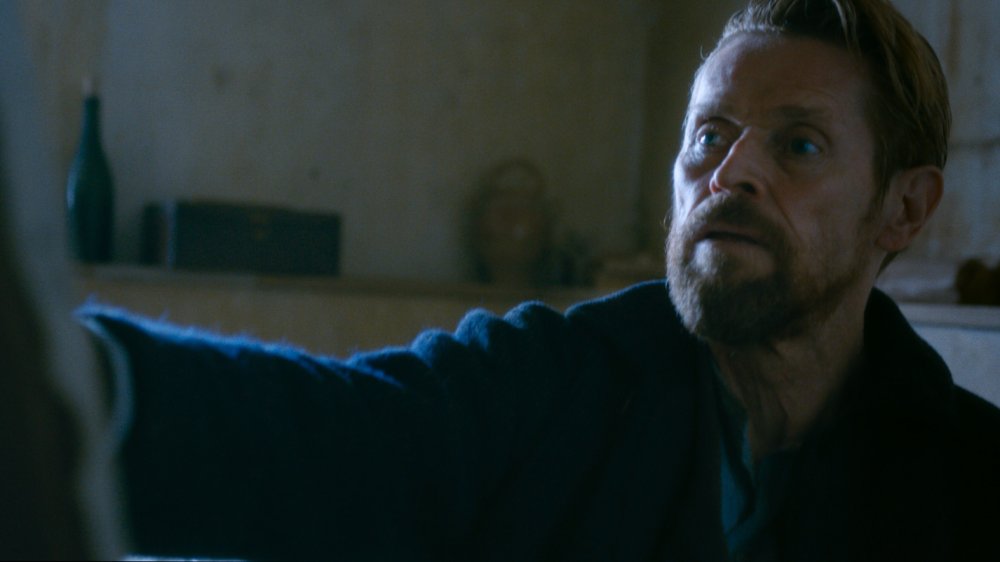 Whatever physical factors did or didn’t contribute to van Gogh’s mental state, the film implies that he had a form of schizophrenia – he tells his brother Theo that he has visions and hears voices, and says to his doctor Félix Ray that he is beset by a menacing figure who makes him want to cut out his heart. His severing of the lobe of his left ear can be construed as a feint at doing this, as well as a sublimated self-emasculation.

At Eternity’s Gate appears to be following Minnelli’s Lust for Life (1956) in ending with van Gogh’s suicide, so it comes as a surprise that Schnabel – subscribing to the theory put forward by Steven Naifeh and Gregory White Smith in their 2011 van Gogh biography, as did Kobiela and Welchman in Loving Vincent (2017) – instead depicts his shooting by a teenager, René Secrétan, who was dressed as Buffalo Bill. Van Gogh had been an outcast in Arles and the proposition that he was killed, casually or accidentally, by a bullying youth in Auvers has the effect of romanticising the isolatedness that haunted him.

Haggardly embodied by Dafoe, Vincent is an ingenuous, socially alienated figure aghast at the suffering he must endure. He is the fourth tortured creative male that Schnabel has focused on in his five narratively fragmented fiction films, following the protagonists of Basquiat (1996), Before Night Falls (2000) and The Diving Bell and the Butterfly (2007). Schnabel hadn’t originally intended to make a van Gogh biopic, but following Vincent from December 1887 until his death in July 1890 provided a structure for the film’s simultaneous meditation on his artistic inspiration and emotional struggle. It downplays the alleged tempestuousness of Gauguin’s nine-week stay with van Gogh in Arles. 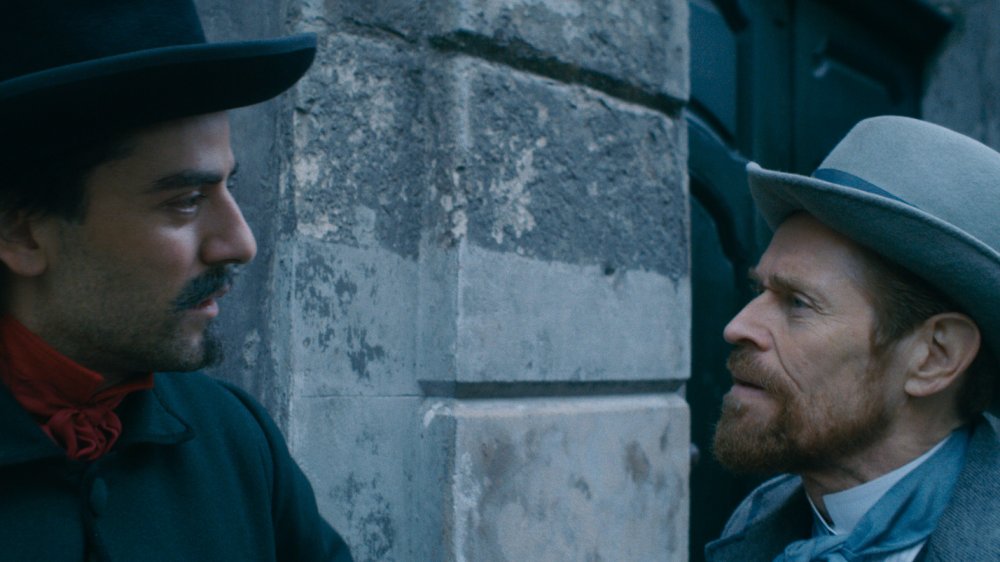 Like Anthony Quinn in Lust for Life, Oscar Isaac’s Gauguin proselytises to Vincent about painting what he sees in his mind rather than from nature – notwithstanding that van Gogh does both – but in a more naggingly critical way. Vincent’s devastated response to Gauguin’s decision to leave is that of a man crushed by the thought of loneliness; earlier in the film he had asked café owner Madame Ginoux if she would stay with him if he paid her 50 francs, not because he wants to have sex with her but because he craves companionship, as he remarks in a reasonable tone over a black screen at the start of the film.

Vincent’s immediate reaction to Gauguin’s news, delivered in a church, is to flee to the adjoining graveyard and weep. The centre of the screen becomes blurry, suggesting Vincent’s tearful point of view, though cinematographer Benoît Delhomme also uses the effect, sparingly, on non-subjective occasions. He and Schnabel have unsurprisingly opted for handheld camerawork throughout to evoke Vincent’s instability. Oblique views of him removing his boots prior to painting them, wide-angle shots – of a field of dead sunflowers, for example – a single black-and-white shot and fleeting use of yellow filters (for van Gogh’s ‘high yellow’ period) combine to express both the painter’s turmoil and the forging of his unique aesthetic.