Screen painting: Randall Wright on his portrait of David Hockney 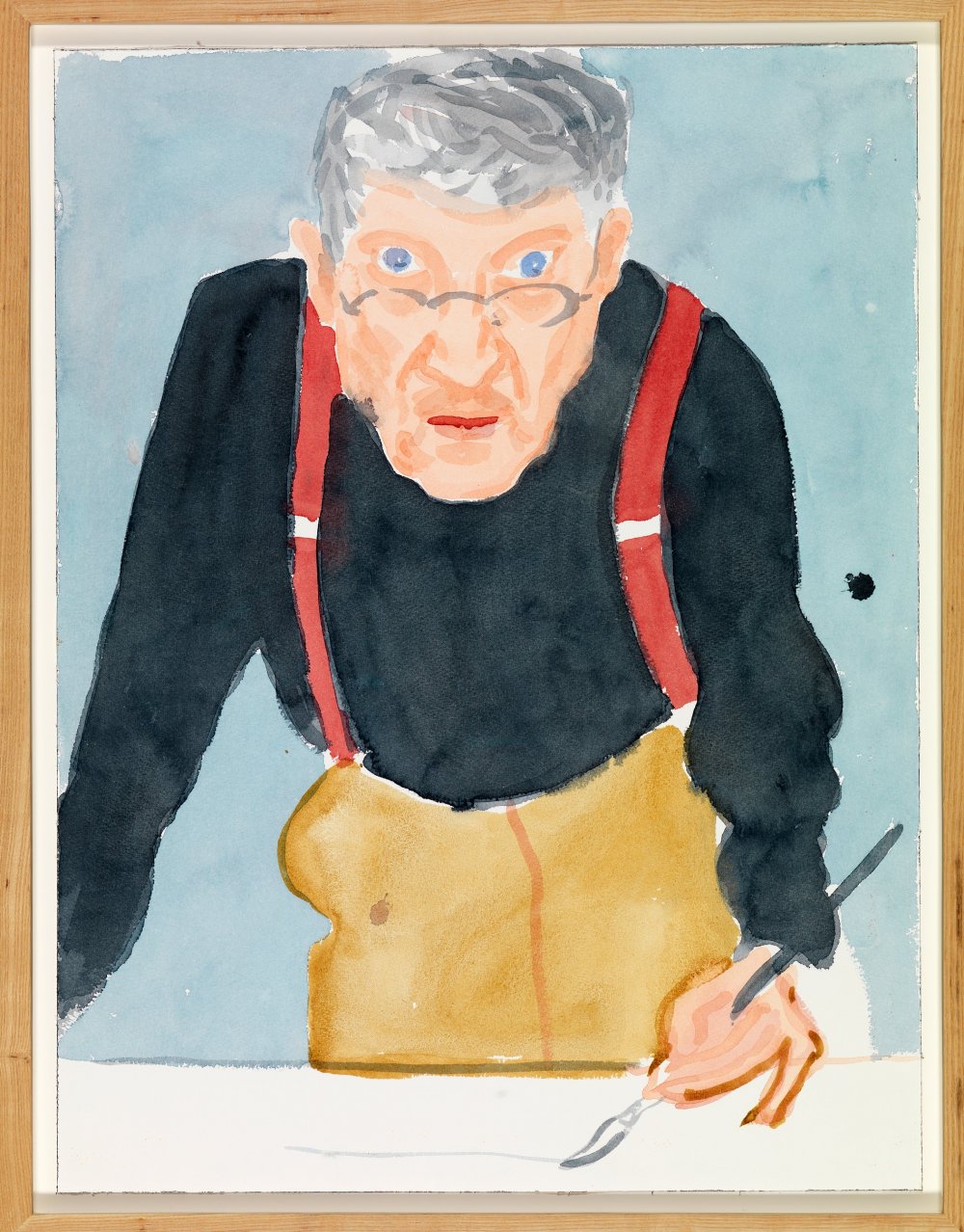 It would be an understatement to say that David Hockney is no stranger to documentary filmmakers’ cameras, but Randall Wright’s ‘visual diary’ Hockney (which is receiving a limited theatrical release prior to its BBC debut in 2015) offers a number of refreshing novelties even for the artist’s long-term fans. As Wright explained, “the pitch relied on access to David’s personal video collection, and his closer friends hadn’t been interviewed before. And this special evidence of a private David is also very deeply connected to what he’s trying to do as an artist, which is to subvert the mainstream media as well as to be a traditional artist using oil and acrylic and etching and drawing techniques.”

Hockney now released in UK cinemas and reviewed in the December 2014 issue of Sight & Sound.

This is Wright’s second Hockney-fronted documentary, so what are the differences between it and David Hockney’s Secret Knowledge (2003)? “That was about his deep concern with the domination of photography, which led him to the discovery that artists used cameras hundreds of years before photography. Indeed, the earliest cinema from his point of view is Giambattista della Porta’s ‘screenplay’ written in 1550 and projected into a room in a Renaissance palace. So Secret Knowledge is about his way of thinking about how an artist should combat this very dominant phenomenon of photography, and Hockney is about his spirit, the person, his character, his attitude, his spontaneity and play and rebelliousness”.

One of the new film’s many pleasures is seeing roughly 200 of Hockney’s works rendered on the big screen in high definition. Was Hockney conceived as a cinema film from the outset? “Yes, because the spirit of David is against formula, against the restrictions that television currently insists on, so it needed to embrace a much freer form of storytelling. I was inspired by Thirty-Two Short Films About Glenn Gould (François Girard, 1994), and I wanted to show the many facets of David, each of which is enormously important to understand him, but without ever removing the mystery. Although it’s broadly chronological, within each theme we’ve given ourselves permission to go backwards and forwards, which is exactly what David does. We didn’t want to have commentary, we didn’t want dates and painting titles, the visual mess that distracts from people looking at the work itself.” 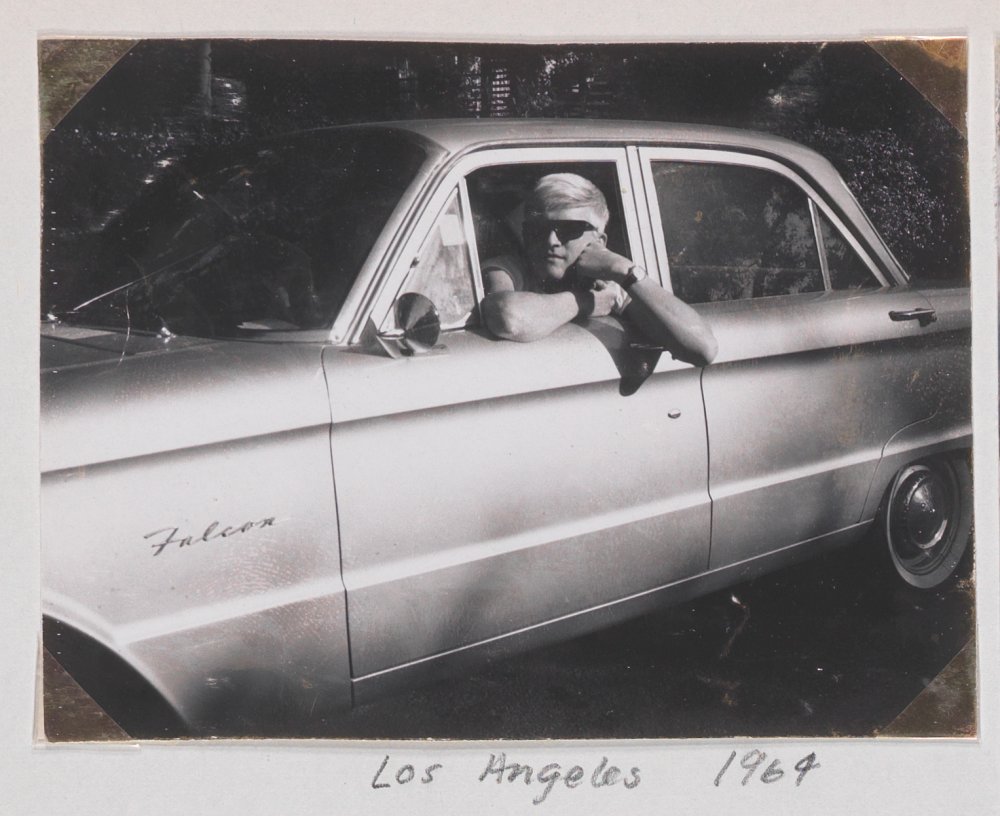 Hockney in Los Angeles in 1964

Although Hockney has always seemed relaxed and open about his private life, the film delves into comparatively unexplored areas, such as losing two-thirds of his friends to AIDS. “Ironically, a lot of his work is about his private life, but the fact of his private life is very closely guarded. I think David’s a lonely person, I think there’s quite a lot of emptiness in his life, but instead of letting that overwhelm him, he fills the emptiness. I once talked to him about Michael Landy’s Break Down (2001), in which he destroys all his belongings. David was very interested in that, and the point he made is that when we’ve accepted the mess of our lives and cleared it all out of the way, what do we do next? And one of the things that David does is that he looks out at the world, a wonderful, positive place to explore, and there’s always something else to see. And I think it’s that investigation that rescues him.”

“This film is much more revelatory, there’s no embarrassment, we’ve some nudity, but we’re kind of reactivating it in a way, because we’ve taken it out of A Bigger Splash (Jack Hazan, 1974), and the footage that Arthur Lambert, one of David’s friends, gave me. We haven’t picked up any of those issues, we haven’t tried to label people as being gay or to define the kind of gay person they are: all that seemed to me regressive. David gets very angry about being called a gay man, he says [Wright adopts a strong Bradford accent] ‘I’m not a gay man, I’m a man! In the 18th century you could fuck who you like!’. Whereas now people very much build their identity around their sexual orientation”. 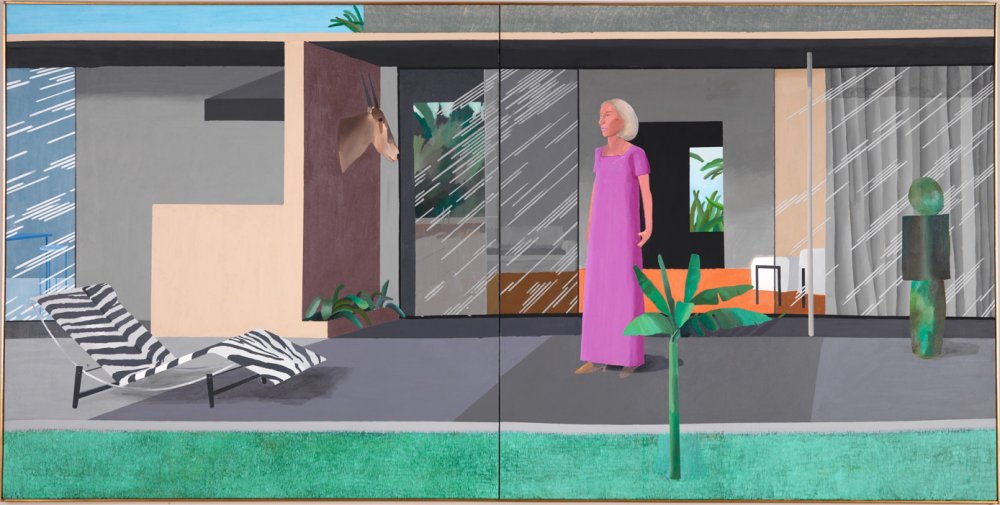 The film also reveals much about Hockney’s native Bradford in general, and his relationships with his parents and siblings in particular, sometimes via Hockney’s own home movies. “Don’t you think it’s wonderful, that game of Scrabble, the way he shot it, the way he constructed it with the opening title made up of Scrabble pieces? And also he’s captured something of that ordinary, rather dull afternoon with the family. It’s very English, but he’s fascinated by those ordinary things”. This Englishness also permeates his overtly American paintings, such as Beverly Hills Housewife (1966) – it’s hard to imagine an American painter giving it that title. “That painting looks amazing on screen, incredibly beautiful, and it’s CinemaScope ratio, Hollywood in its dimensions as well as its subject matter. He’s very influenced by cinema, he’s very influenced by the power of those big images. When he was a boy, the biggest, best images were on the silver screen, that was the window on the world. It’s a period of his painting that Scorsese talks about being influenced by, and I think it’s the high eyeline, slightly above the heads of the figures, so you have this crystalline, floating, dreamlike reality to the picture, which is very filmic”.

The film has a lot of interplay between Los Angeles and Bradford, the contrasts and some surprising similarities. “It’s very very key, that acknowledgement that there was something better somewhere else, somewhere where he could escape labels. At that time it wasn’t easy to be a gay man in Bradford, it wasn’t easy to be working class in London, it wasn’t easy to be a figurative artist because art was moving on to minimalism and conceptual art. And it was true in New York too, so Los Angeles was an empty space. But it was also, as David calls it, the Florence of the twentieth century, the place where the biggest and best images were being made. Most other artists had decided that they weren’t going to compete with photography or with films, but David took it all on”.

“This is how I hope the whole film will rub off on people, I hope they’ll remember that he is fundamentally guiding us to see the world for ourselves, to realise that a lot of the obscurantism in art is a kind of veil and actually that you can sweep it aside and just deal with the conundrum of looking. Take the Yorkshire painting Three Trees Near Thixendale (2007): it’s a very ordinary view, a hedge with trees, with gently rolling hills behind. But what you start to see is that each tree is like a different character, they’ve grown in very different ways, and what you see is something extraordinary in the ordinary. The complexity and depth grows and grows the more you see them. This is the process that was very much there in picture-making up to the invention of photography, but now most of what we see in the world is seen with the depression of a shutter, and we’re not engaged with it or attached to it in the same way”. 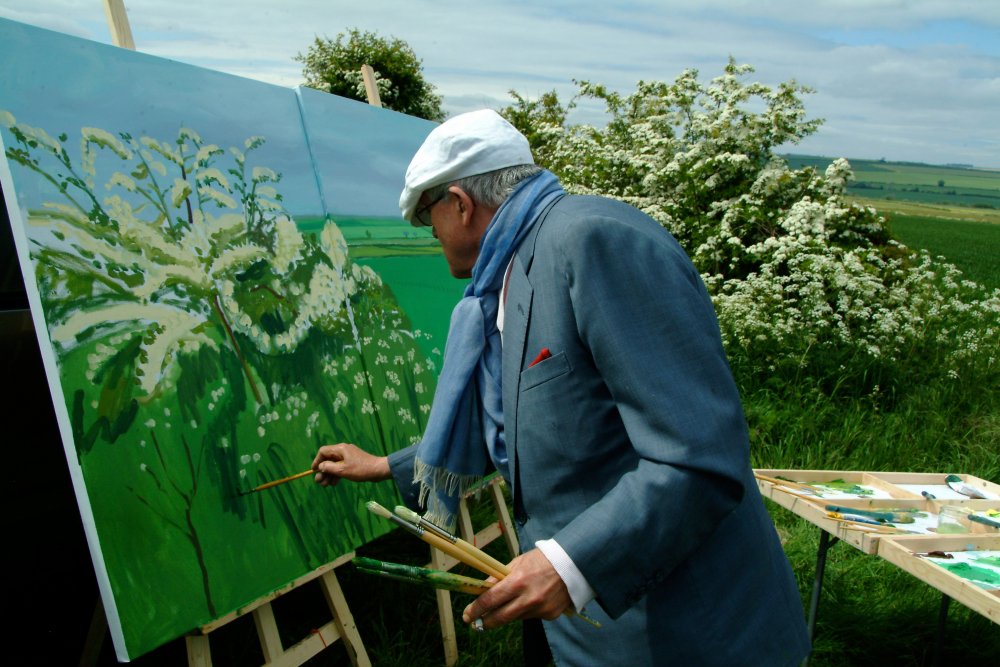 Although the film is clearly ‘authorised’, Wright takes care to establish early on that it won’t be a gushing hagiography. “I think in this country people see David as a kind of music-hall act, he’s a curmudgeonly, sometimes boring presence, droning on about cigarettes or whatever his issue is, and his friends love him so much, and he’s known them for so long that they really feel free to make fun of him. What I’m trying to do with this film is show people a much more complex and serious David Hockney, and to remind people that the optimism, which a lot of people misinterpret as a kind of hedonism, is a response to a knowledge of the unvarnished truths of life. Apart from losing two-thirds of his friends, he’s been extremely anxious about all sorts of things, about nuclear war, which is in the section leading up to the painting of A Bigger Splash (1967), the connection between the splash and the explosion. His life starts with bombs landing on houses two doors down from him”.

“He’s a very unusual artist: you have to go back to Matisse or Bonnard to find someone who paints the joys of life and now we prefer Lucien Freud with his paint made flesh – these aren’t beings who might fly away as angels. The fashion now is to see that as the profound hair-raising truth, but that’s not the complete story of human nature. We’re capable of extraordinary things – we’ve just landed a washing machine on a comet! – and David’s thing is yes, let’s understand the obscenities of the Second World War, but let’s work out how we’re going to live, let’s not drag ourselves through that angst day after day. He’s a tough person, he’s a difficult person, but he’s remained very real and very grounded. He’s very unpretentious and he’s very vulnerable, but he’s got a very very strong message to us, which is ‘just look at the world’”.

Related to Screen painting: Randall Wright on his portrait of David Hockney