Andrew Garfield as Sam in Under the Silver Lake

What starts as a deadbeat noir develops into a woozy, Ready Player One-style musing on American pop culture in It Follows writer-director David Robert Mitchell’s third feature, Under the Silver Lake.

Andrew Garfield’s lead Sam is the sort of underachieving, underemployed dude that could comfortably stand alongside his elder burnout brothers Jeff Lebowski (The Big Lebowski) and Doc Sportello (Inherent Vice), and he boasts the overactive imagination of the busy-body, wannabe detectives of the millennial-skewering TV show Search Party. He lives in an apartment he can no longer afford, residing alone save for his discarded guitars, classic movie posters, old Playboy magazines and retro video games.

One day he develops an infatuation with his bonny new neighbour Sarah (Riley Keough). After they get together for a viewing of 50s romance How to Marry a Millionaire – under the watchful eyes of Sarah’s custom Marilyn Monroe, Betty Grable and Lauren Bacall Barbie dolls – a relationship seems to bloom. But the next day Sarah is gone without a trace. Desperate to find her, Sam uncovers conspiracies, cults and urban legends that may have a link to his dear, disappeared gal. Could Sarah be connected to the serial dog-killer terrorising the city? Or perhaps the disappearance of a local celebrity billionaire?

Garfield is terrific as Sam, a gangly, gawky youngster still boyish in looks and adolescent in outlook despite heading into his 30s. In his search, Sam ventures through a kaleidoscopic underworld of novelty bars (the Crypt Club, where tables are fashioned after famous gravestones), outdoor film screenings and rooftop gigs, as Mitchell stirs up a gumbo of philosophical concepts and leftfield pursuits, from psychogeography and urban exploration to hunting for subliminal messages in popular media and documenting local mythology. In Under the Silver Lake, Los Angeles plays itself: a city where the past simply refuses to cede ground to the present.

To match this thematic drive, Mitchell bakes post-modern flourishes into the film itself: It Follows composer Disasterpiece pastiches 1950s Hollywood orchestral scores for his flowery, foreboding soundtrack; whip-pan camera moves, slow-fade transitions and painted backdrops evoke the filmmaking craft of yesteryear; and the production design details cram the frame with telling clues to the poly-stylistic affectations of this mixed-up, confused generation. These range from the playful (a glimpse of former Peter Parker actor Garfield casually leafing through a yellowing Amazing Spider-Man comic book) to the nail-on-head obvious: Sam, whose daily routine leaves ample time for intentful voyeurism of any woman within view, has a poster for Alfred Hitchcock’s Rear Window hanging proudly in his living room. 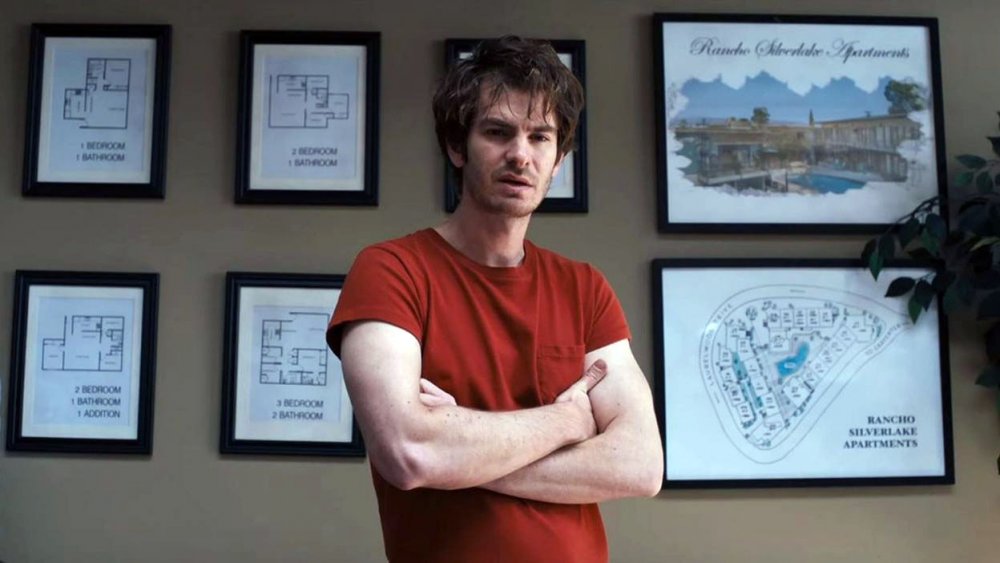 Under the Silver Lake’s weakest thread is an attempted critique of the male gaze. Each and every female character is gawked at by Mitchell’s camera. Most appear topless at one point or another, and each are given about as much depth and dimension as Sam’s arrested worldview allows (read: very little). Even Keough’s distant object of desire never quite develops beyond the idealised and objectified image in our protagonist’s head. A halfway point deep-dive into the ways that consumer culture has satisfied straight male desire through advertising, pornography and movie stardom attempts to turn the tables on what has come before; but you can’t condemn effectively while still perpetuating.

It’s a shameful mis-step, for the film otherwise presents a thoughtful and ambivalent view of grown-up fanboys. It even wrings some pointed humour out of their hopeless, unhealthy obsessions. “I really need to get a family,” sighs a zine-making truther played by character actor Patrick Fischler (Mad Men, Mulholland Drive), who serves as Deep Throat to Garfield’s Bob Woodward, as he surveys his kingdom of dusty tat. “Someone to leave all this to.”

Silver Lake’s darkest depths find its characters diving for pearls when they should be diving for dear life. They are searching for meaning in a modern world, reassessing the ephemera that they have spent a lifetime consuming, and reckoning with the tall tales told to them by the flashy fantasies of the big screen. Oddly shaped, oddly profound, and full of fascinating (or, equally, frustrating) flaws, Mitchell’s idiosyncratic shaggy-dog story is destined to become a warts-and-all cult favourite.

Related to Under the Silver Lake first look: David Robert Mitchell casts a voyeur into pop’s hall of mirrors