from our forthcoming June 2018 issue 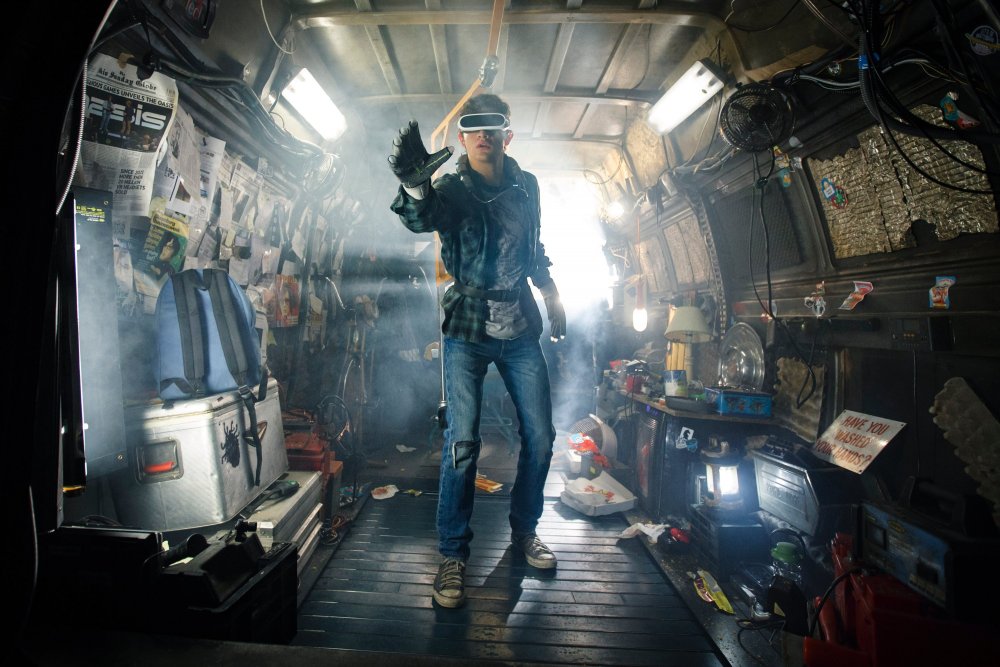 Tye Sheridan as Wade in Ready Player One

Steven Spielberg’s latest mournful vision of suspended childhood is drenched in consumerist nostalgia. Ready Player One, adapted from a novel by Ernest Cline, comprises two worlds. First, the dystopian Earth of 2045, ravaged by “bandwidth riots” and “corn syrup droughts”, typified by the grotty vertical trailer park where teenager Wade (Tye Sheridan) lives. Embedded in this world is online Virtual Reality platform OASIS, where Wade retreats, along with his neighbours, as shown Rear Window-style in a vertical panning shot that catches residents playing while blinkered and alone.

Although Wade promises that in OASIS “the limits of reality are your own imagination,” it’s no Eden. In what reads now as a dig at the cryptocurrency rage, you can earn “serious coin” in OASIS, and the best way to do that is by fighting or racing, grabbing gold that hovers in the air or cascades from severed limbs, platform-game style. Conversely, the worst that can happen to you there is virtual bankruptcy or “losing your shit”.

To win the ultimate prize, control of OASIS, described by the CEO of ruthless corporation IOI as “the world’s greatest economic resource”, you must complete a fiendish challenge set by its dead creator James Halliday (Mark Rylance) to find an Easter Egg. The only way to solve Halliday’s puzzle is to follow clues from his own history and to be absorbed in his idiosyncratic tastes, largely solidified in his isolated 1980s childhood. In OASIS life has become gamified, and only geeks shall inherit the Earth.

Mark Rylance (on the screen) as Halliday

Halliday, as Wade’s gamer pal and love interest Samantha (Olivia Cooke) sees before he does, is really a tragic figure – who never kissed a girl and lost his only friend, business partner Ogden Morrow (Simon Pegg). The Easter Egg hunters (Gunters for short), comprising Wade, Samantha and friends as well IOI, which plans to sell advertising in the OASIS, can search Halliday’s memories in a database, but it is advantageous to be conversant in his now-dated pop culture references. IOI employs a laboratory of brainstorming nerd-researchers, but Wade’s gang, who quiz each other on Halliday’s favourites, are enthusiastically fluent in brands popular decades before their birth.

Ready Player One is a pageant of these references, an elaborate feat of CGI and copyright clearance, with images from games and movies speeding past, to the tune of Van Halen and A-Ha. The players must be as adept at playing Atari 2600 games and Street Fighter and throwing Madballs as they are nimble in VR. Even canonical films Citizen Kane and The Shining are mined for puzzle-cracking shorthand, the latter hosting an entire set-piece in which the gamers comb the Overlook for clues. The most affectionate film references are reserved for the Back to the Future trilogy, produced by Spielberg himself, and well-matched to this retro-futurist caper. What should be a gleeful rush of nostalgia soon becomes exhausting, though – the Lego movies handled their barrage of references with much more aplomb – and ultimately it’s only as nourishing as the Halliday-approved diet of Tab soda and Froot Loops.

Despite so many moments better relished in a freeze-frame, there are cinematic thrills in this echo chamber – notably an eye-searing drag race through warped New York streets, featuring both King Kong as an end-of-level boss and an ingenious work-smart solution. Nothing else matches this burst of visual adrenaline; elsewhere the giddy camerawork and eerie weightlessness of the CG imagery are more unsettling than exciting. Visually, the film runs the fine line between homage and cliché. The non-CG images of earthbound players thrashing about during their visual adventures are more striking, but this idea was better developed in Nacho Vigalondo’s Colossal.

Post-Gamergate, there’s a toxic element to any celebration of geek culture, which Ready Player One is acutely aware of, even beyond Rylance’s poignant portrayal of Halliday as a loner with a half-lived life. Samantha proves her gaming mettle is equal to Wade’s (she sees more action than she does in the book), and there’s a significant pause after the plot reveal that an apparently male character is really a butch woman of colour – which may be one in the eye for the Ghostbusters backlash mob. Wade himself is no misogynist dude-bro, but he is a yawning blank, especially next to Cooke’s brave, rebellious Samantha. Ben Mendelsohn provides a slimy and technologically challenged villain as the IOI CEO, but his virtual heavy i-Rok has sharper gags, delivered by T.J. Miller in a dour parody of geek banter.

A film this desperate to recreate the pleasures of cult fandom, while warning that life is better lived off-screen, treads on shaky ground. Sadly, Ready Player One offers mostly surface pleasures, while encouraging audiences to dig for borrowed gold.