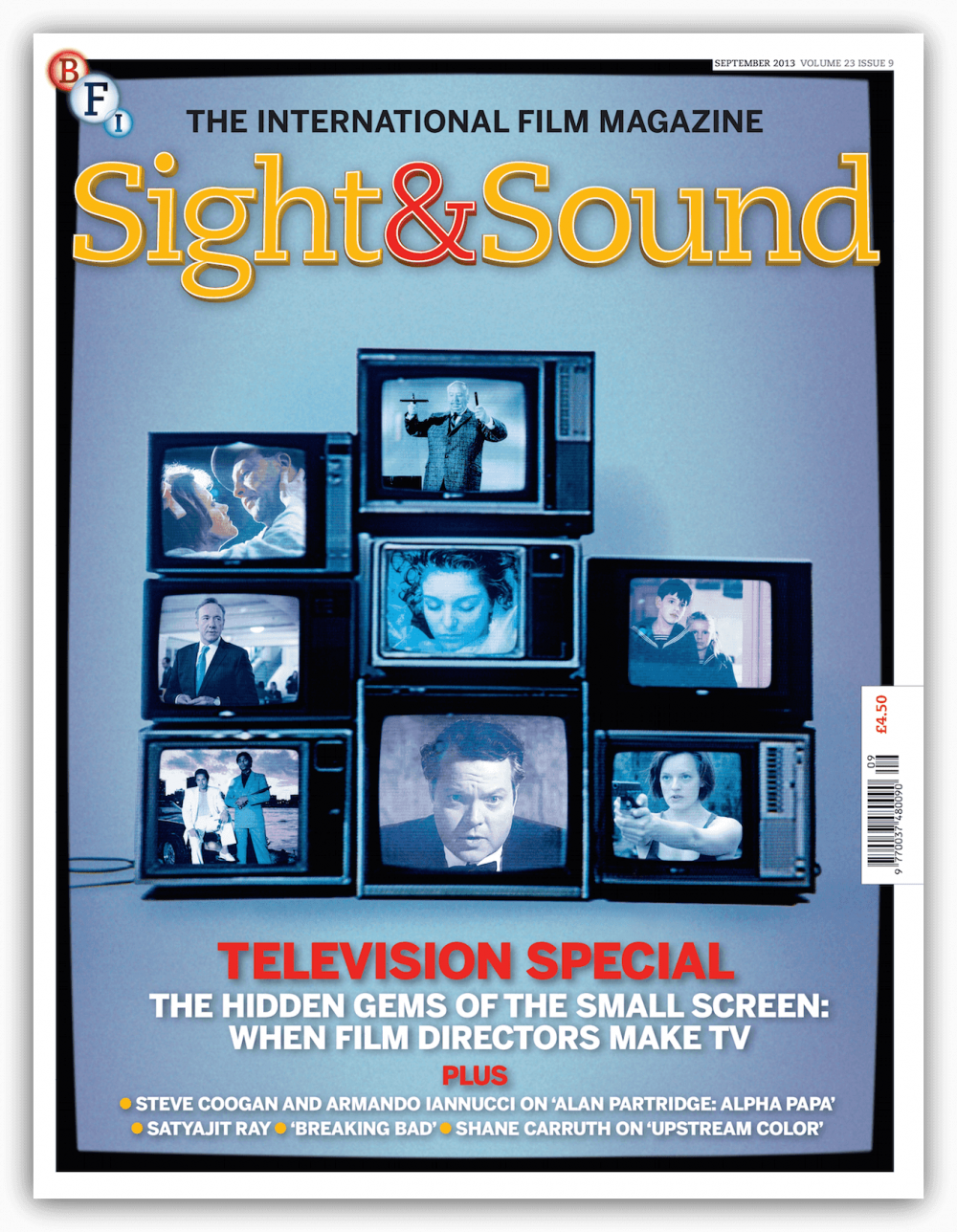 This month we proudly announce our Television special, which is not just a survey of the best of today’s television drama but more. We’ve encouraged a bunch of our finest writers to look at the television work of 50 major film directors, from Robert Altman to Orson Welles (with more to come online later), taking in the likes of Twin Peaks, The Sopranos, Berlin Alexanderplatz and many many other great series and one-offs.

Of course this cabinet of curiosities is partly inspired by the recent TV works of Steven Soderbergh, Jane Campion, Martin Scorsese and others. Henry K. Miller’s incisive introduction takes us through the world of the showrunners and how the DVD box-set phenomenon has come to rule our thinking about quality drama onscreen. But he also also delves back into television’s early years, if only to prove that cinema and the small screen have been a two-way street for as long as they’ve both co-existed.

Among the finest of recent television series is Breaking Bad, the long-building tale of Walter White (Bryan Cranston), the chemistry teacher who turns to a life of crime, cooking crystal meth, after being diagnosed with terminal cancer just as his wife discovers she’s pregnant. At the moment when the show is about to broadcast its final eight episodes in the US, series aficionado John Wrathall analyses the origins and peculiarities that led to this astonishingly eccentric thriller series becoming a world-conquering reality.

Alan Partridge: Alpha Papa is the feature film breakout of an altogether different kind of television creature. Beloved for his evocation of the most cringe-inducing aspects of UK celebrity culture, Steve Coogan’s signature character Alan Partridge has haunted UK domestic screens in multifarious ways for decades. Having talked to Coogan and co-creator Armando Ianucci, Ben Walters here unwraps the character’s rich and disruptive history with a touch of awed admiration.

On the more traditionally filmic side, and to coincide with a retrospective at BFI Southbank, we have a specially collated interview with the great Satyajit Ray garnered from several meetings he had with author and Ray enthusiast Andrew Robinson. Alongside this we’re delighted to present some of Ray’s graphic art works, with a descriptive article, also by Robinson.

The last two of our features are devoted to more outré cinema offerings. Few films are as enjoyably puzzling as Shane Carruth’s unclassifiable conundrum Upstream Color, one of the big successes at this year’s Sundance festival. An invasive experiment on Kris (Amy Seimitz), a kidnapped young woman working in the film industry, destroys her ongoing life and much of her future prospects. Then she meets up with Jeff (Carruth), who seems to have suffered similarly and slowly, painfully they become lovers and team up to investigate what happened to them. It’s a fascinating conceit in which identity possibly becomes an illusion.

In an entirely different vein of experiment comes artist filmmaker Jem Cohen’s lovely, meditative Museum Hours, which is about transience, art and how we explain the world to each other. Anne (Mary Margaret O’Hara), an aging Canadian woman, comes to Vienna because an old friend has gone into a coma. Needing to find the hospital, she recruits Johann (Bobby Sommers), a museum guard at the Kunsthistorisches Art Museum to help her, and they become considerate archivists of each others sensitivities. It’s as lovingly done as we hope this issue is.

While in recent years Hollywood has turned its back on serious drama, US cable series like The Wire and Mad Men have scaled new heights. At the same time, directors who made their name on the big screen have been embracing the creative opportunities offered by the small: Jane Campion with Top of the Lake is just the latest example. But is this phenomenon just a culmination of the cross-fertilisation between the two media that’s been going on since the 1950s? After all, TV has always provided a space where directors eager to work on the big screen could learn their craft. What’s less often looked at is the reverse route whereby established masters of cinema – Hitchcock, Welles, Fellini – turned their hands to the distinctive formats of TV. Though the results are less celebrated than their big-screen movies, they’re no less compelling – and more readily available than ever. Over the following pages S&S examines the fascinating work made for TV over the past 60 years by the world’s greatest filmmakers. Introduced by Henry K. Miller.

At a time when television drama is reckoned to be superior to most film releases, we look at how 50 top-drawer film directors, from Robert Altman to Orson Welles, made their impact on the smaller screen. Introduction by Henry K. Miller.

An Alan for all seasons

Alan Partridge’s promiscuous appearances on numerous media channels – via radio and TV series, chat shows, awards ceremonies and webisodes – perhaps made his big-screen debut inevitable. But they have also created a rolling satire of the media landscape over the last 20 years. By Ben Walters.

The secret life of Walter White

Climaxing this month with the US broadcast of its final block of eight episodes, Breaking Bad has become one of the most discussed and revered shows on television since its first season aired in 2008. A rich mix of film noir, sitcom and western traditions, it is above all a tragedy of Shakespearean proportions, centred on the unlikely figure of a 50-year-old chemistry teacher in suburban New Mexico. By John Wrathall.

To coincide with a three-month BFI retrospective of Satyajit Ray’s work and the release of five of his films on Blu-ray, the following interview has been compiled from a long series of conversations Andrew Robinson had with the great Indian director while researching his biography Satyajit Ray: The Inner Eye, in the years before Ray’s death in 1992. By Andrew Robinson.

In Museum Hours experimental filmmaker Jem Cohen looks at how we look at each other and make connections in a transient world with images of the past and the present. By Sophie Mayer.

In the frame: The once-angry boys

The films of John and Roy Boulting looked into every corner of post-war British institutional life with scorn warming to affection. By Geoffrey Macnab.

While manchildren dominate US comedy, South-East Asian cutesiness has affected the men in Wong Kar-wai’s hip world. By Hannah McGill.

As René Clément’s Plein Soleil is re-released into UK cinemas, we examine the sharpest adaptations of Highsmith’s pitiless thrillers.

Dispatches: A letter to Paul Schrader

Development tale: The devil and the flesh

Charles Gant on a lean summer box-office for arthouse films

There is a strong showing from emerging women filmmakers in the latest round of projects to receive Lottery funding, but we are still committed to established talents such as Mike Leigh, Ken Loach and Lone Scherfig. By Ben Roberts.

Profile: Life in the fast lane

Scandinavian documentaries and archival treasures come together in a unique festival in the Arctic Circle. By Richard Porton.

Artists’ film and video: Flickerings on the Lido

The proliferation of artists’ film and video at the Venice Biennale points up differences between the screen in the gallery and in the cinema. By Craig Burnett.

The Thames has inspired less than its share of notable filmmaking but a current exhibition showcases a raft of stimulating new work. By Sukhdev Sandhu.

Profile: Melting with the world

Soundings: Music from beyond

Often dismissed even by their composers, 1960s horror scores in fact constituted a rare mainstream showcase for musical modernism. By Frances Morgan.

Trivial details of daily life and cute cats – YouTube and the first home movies have more in common than we think. By Edward Anderson.

+ other releases reviewed in this issue

Rediscovery: The Many Loves of Dobie Gillis

Fifty years ago, a teen sitcom about a wholesome all-American hero became the surprising template for later satires of suburban malaise. By Nick Pinkerton.

+ other new DVDs reviewed in this issue

Difficult Men: Behind the Scenes of a Creative Revolution: from The Sopranos and The Wire to Mad Men and Breaking Bad

The famous last scene for one of television’s most complex characters is poorly served by a debate about its literal meaning. By Matt Zoeler Seitz.