Film of the week: What Maisie Knew

Scott McGehee and David Siegel’s modernising of Henry James’ child’s-eye divorce study swaps the master’s scalpel for a spoonful of sugar – but does give Julianne Moore and Steve Coogan room to humanise their monstrous parents. 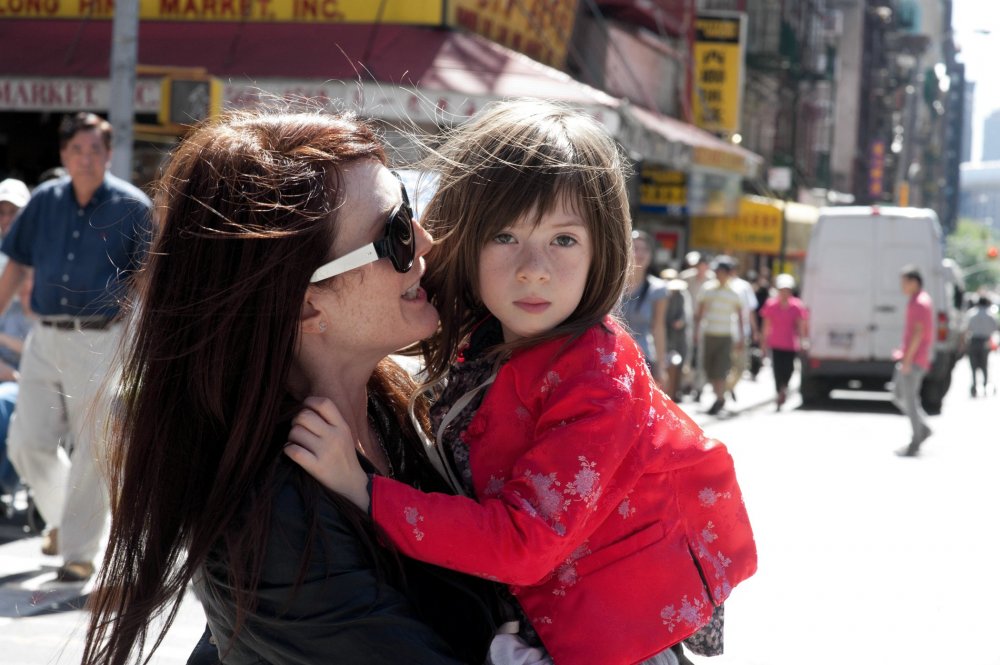 In the late 1990s there was a rush of film adaptations of Henry James – Jane Campion’s The Portrait of a Lady, Iain Softley’s The Wings of the Dove, Agnieszka Holland’s Washington Square, Paul Unwin’s The American, James Ivory’s The Golden Bowl – and one might at a stretch include, as a conscious variation on The Turn of the Screw via Jack Clayton’s The Innocents (1961), Alejandro Amenábar’s The Others (2001). Since then there has been a steady trickle of dubious adaptations of The Turn of the Screw, and some obscure, intriguing-sounding European TV or low-budget versions of other James tales (The Friends of the Friends, The Third Person, The Private Life) – but nothing that has reached the mainstream until now.

What Maisie Knew, an adaptation of the expatriate American’s 1897 novel of childhood and divorce, modernised and repatriated from late-Victorian London to contemporary bohemian New York, has been something of an arthouse success in the US, partly no doubt because of the attractive star casting. This handsome film, by the directing team of Scott McGehee and David Siegel, from a script by Nancy Doyne and Carroll Cartwright, boasts, in fact, excellent performances: from Julianne Moore as Susanna (James’s Ida Farange), Maisie’s glamorous, egotistical, monstrous mother, here an ageing rock star rather than an idle, billiard-playing society beauty; Steve Coogan as Beale (James’s Beale Farange), her handsome beast of a father, here a somewhat desperate art dealer rather than a leisured ex-diplomat haunting the clubs of “perpetual Piccadilly”; Alexander Skarsgård as Lincoln (James’s Sir Claude), Susanna’s second partner, here a highly sympathetic, unworldly, quite childlike bartender instead of an impecunious and rather ineffectual aristocrat with a weakness for women; and appealing young Scots actress Joanna Vanderham as Margo, Maisie’s loving and also childlike nanny, who becomes Beale’s second partner and then, through a shared affection for Maisie, ends up with Lincoln.

It gives some measure of the film’s difference from the book – softening, sentimentalising, de-eroticising – that Margo is very unlike James’s Miss Overmore, Maisie’s first nanny, who turns, when she marries and becomes (to her circle) ‘Mrs Beale’, into almost as formidable a beauty and manipulator as Ida. Mrs Beale is pitted against and contrasted with second nanny Mrs Wix – older, poorer, uglier and more moralistic – who takes on the role of protector of Maisie’s ‘morality’ amid the decadent goings-on of a set James probably based on that of the Prince of Wales, Edward VII-to-be. Mrs Wix appears in the film – unnamed save in the credits – for a minute at most, hired by Susanna to replace Margo, and very ancient and severe-looking in a film where youth and informality dominate – but she is swiftly despatched again when Maisie finds her scary and complains that “she smells funny” (it’s as if the film agrees).

The real star of the movie, at any rate – present in every scene – is the delightful, tiny, attaching six-year-old Onata Aprile as Maisie Beale (Coogan’s Beale seems to have the same first and last name). Her sweet, slightly raspy voice and great naturalness and intelligence make it interesting and touching to sense her reactions when she watches the appalling behaviour of her parents.

It is, however, a major difference between movie and book that Maisie remains essentially the same age throughout the film, which was shot over 35 days – whereas James’s novel stretches over years and charts a process of increasing exposure to adult rancours, desires, complications and weaknesses that carries its heroine to a new maturity. In fact, James wrote in a letter in 1898 that in the novel “my climax, arrived at, was marked by, and consisted of, the stroke of the hour of the end of [the girl’s] childhood”. One might say that in the film the end seems to mark instead the start of the girl’s real childhood proper – away from New York noise and parental awfulness in a seaside idyll with two sweet young parent-substitutes, ready to take a boat trip on placid waters. Nothing in the script invokes the dubious future. 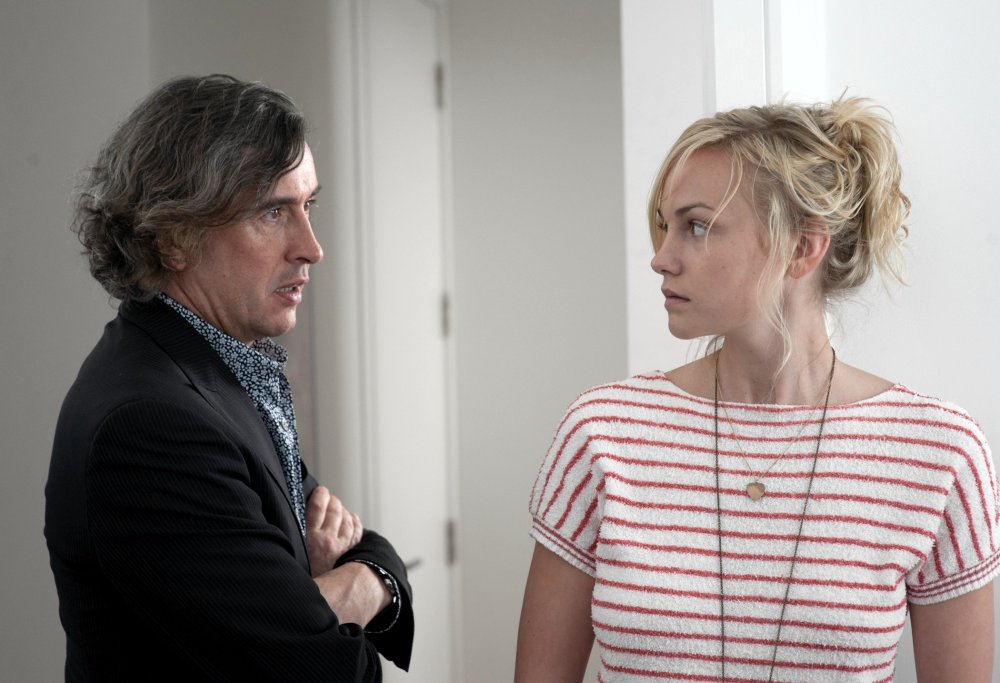 The film succeeds best as a fable, an affecting fantasy in which an unloved child can replace unsatisfactory parents with new improved ones brought together by love of her. This Maisie never gets old enough to be suspected of manipulativeness, as James’s does (excusable though her manoeuvrings are). The absence of voiceover, and the fact that there is little attention given to Maisie’s patterns of behaviour in ways that might give us access to her inner life, leaves us on the surface with a wonderfully touching performance but no real equivalent of the deep feeling of responsibility of James’s Maisie, or of the crisis of her so-called ‘moral sense’ at the novel’s climax.

However, enough remains of the traumatic events in James’s story to give the film a spine; one worries for Maisie and her young carers, and the sugaring of innocence with which the action is served up makes the nightmare of childhood abandonment palatable – whereas in James’s novel it’s as much the controlled indignation and irony in the extraordinarily supple third-person narrator’s voice, filtering Maisie’s perceptions, that keep the horror at a distance.

One can see a continuity with McGehee and Siegel’s films since their striking debut with the ambitious, schematic identity/amnesia thriller Suture in 1993 – and perhaps particularly the glossy Berkeley-set drama of spiritual crisis Bee Season (2005), with its sensitive, observant 11-year-old heroine (gifted at spelling, hence the title) watching parents Richard Gere and Juliette Binoche and brother Max Minghella almost fall apart (it could have been called What Elly Knew).

Parenting was also the central focus of their Ophuls remake The Deep End (2001), a sensitive but contrived family thriller in which Tilda Swinton so cares for her gay teenage son that she hides his blackmailing lover’s body in Lake Tahoe after an accident. In their most recent film, Uncertainty (2009), a generically uneven variation on Kieslowski’s Blind Chance (1987) starring Joseph Gordon-Levitt, the whole family-drama plot hinges on a decision whether to abort a pregnancy or become parents. 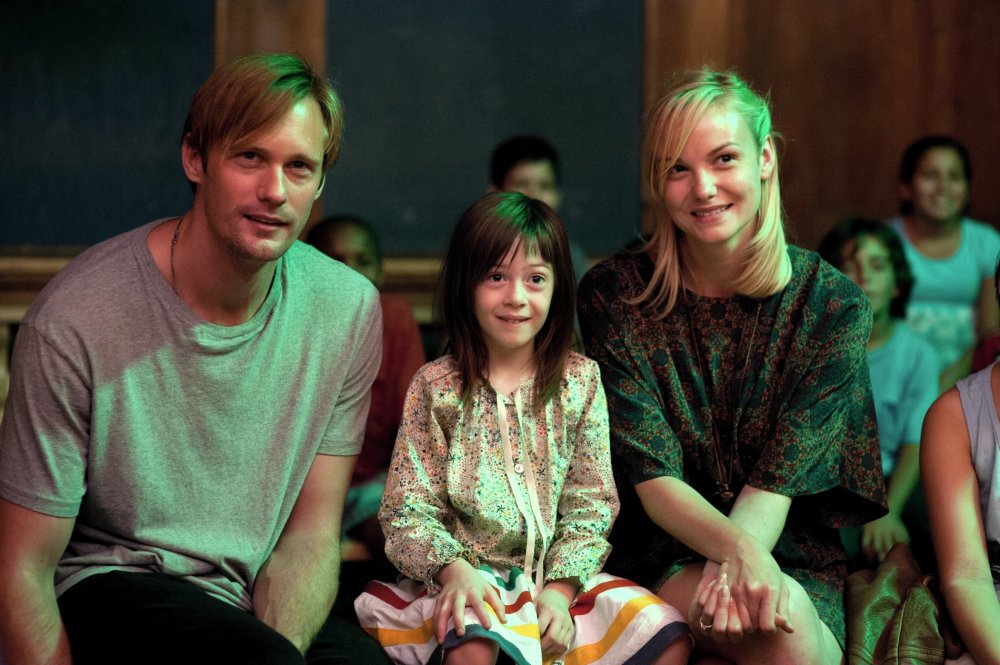 Maisie in the middle: Aprile with Alexander Skasgård as Lincoln and Joanna Vanderham as Margo

Looking through their oeuvre – decent in feeling, liberal, sensitive, intelligent, gravitating (in the last three films) towards a tasteful, observational naturalism, increasingly overlaid by a New Age-ish melancholy-but-uplifting indie-movie score that seems to say we’re in the groove of American Beauty or Little Miss Sunshine – it’s easier to see why the ferocity and irony of James’s novel wouldn’t fit their bill, and why the Doyne-Cartwright version appealed to them. James wrote when divorce was rare and Maisie’s treatment an isolated outrage; in our much changed world it’s unusual to find a person without direct experience of family break-up. For James, the selfishness of Ida and Beale is symptomatic of the abdications of a whole upper class; the film’s Susanna is a rock star and its Beale a shitty Englishman, both exceptions to the rule of general niceness (their demanding careers also give them some excuse for their neglect).

For a sharper, more richly satisfying film about children and the damage of marital discord, one could go to, say, The 400 Blows, Fresh, The Squid and the Whale or A Separation. But soft-centred and bland though it is as a version of James, the McGehee-Siegel What Maisie Knew is worth seeing for the performances – especially those of Coogan and Moore, who manage to suggest something human trapped inside the carapace of monstrous compulsions – and for the way it captures something of the moral urgency of the original about the vulnerability of childhood.