In this issue: Danny Boyle, Kristin Scott Thomas, Carlos Reygadas, Point Blank and Beyond the Hills.

In print and digital from 8 March. 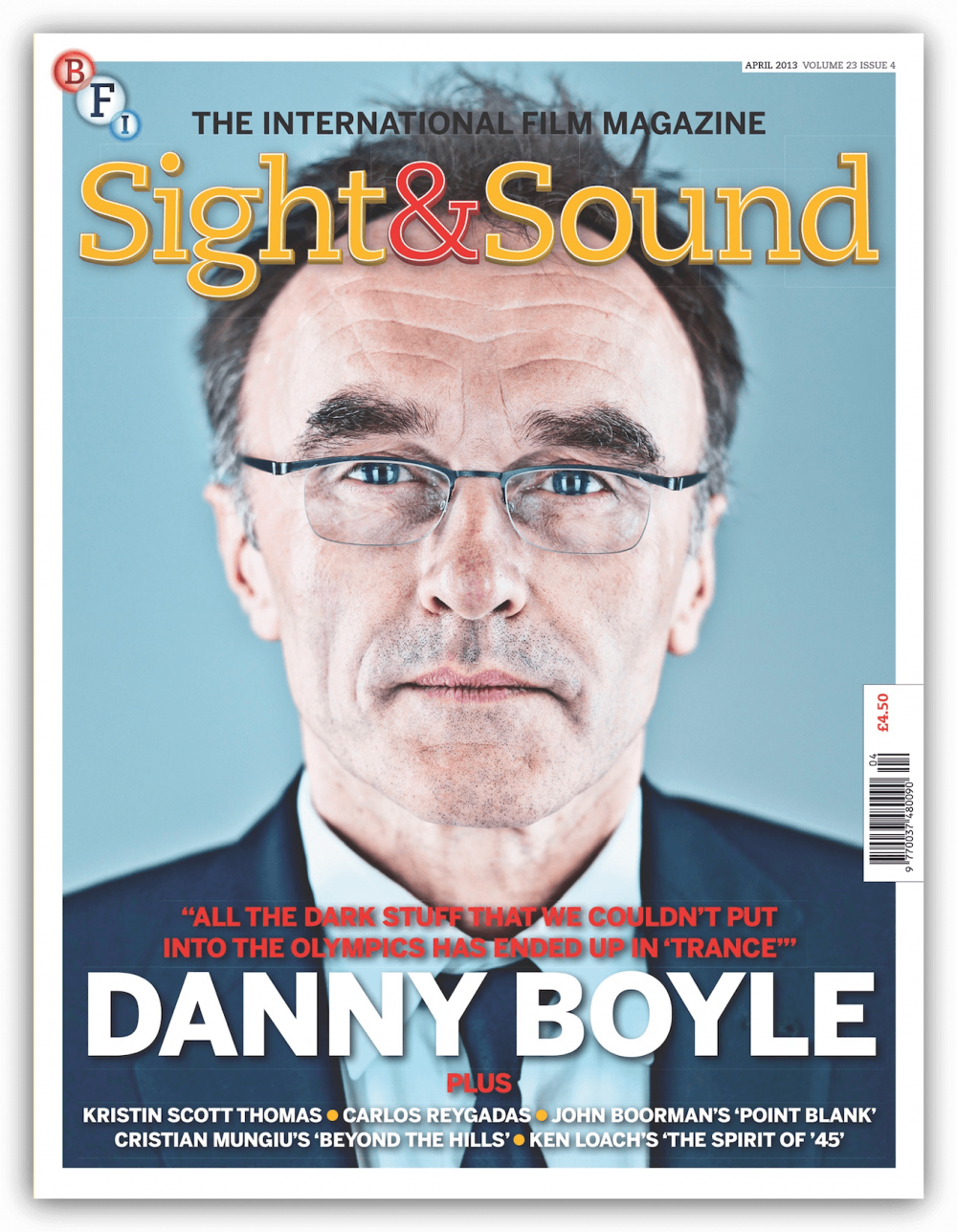 No one has done a better job of presenting Britain in an international context than this month’s cover star Danny Boyle, as he did magnificently with last year’s Olympics opening ceremony. The director fills our special S&S Interview slot just in time for the release of his new London-set film Trance, a complex thriller about an amnesiac art auctioneer (James McAvoy) who enlists Rosario Dawson’s hypnotherapist to help him remember where he stashed a Goya he helped Vincent Cassel’s gangster to steal.

Made under the influence of Nic Roeg, Trance is Boyle’s “murkiest” film yet, according to our interviewer Ryan Gilbey, and reunites him with Trainspotting screenwriter John Hodge. As Boyle recalls, he shot the film before the Olympics and edited it afterwards, so the theme of forgetting and remembering is apt indeed.

The career of Kristin Scott-Thomas – now starring in François Ozon’s Hitchcockian psychological thriller In the House (Dans la maison) – has seen her ricochet back and forth between the UK and France. Her English roles often confine her to a pre-WWII aristocratic stereotype, she’s complained – whereas, according to Ginette Vincendeau (in the latest of our series The Actors), it’s her very adaptable Englishness that has made her so right for a wide variety of lead roles in France, though they still benefit from her class-inflected persona.

Carlos Reygadas’s impressionistic new film Post Tenebras Lux is partly about an upper-middle-class family’s relationships with locals in the environs of the city of Tepoztlán (where Reygadas himself lives). At Cannes it perplexed and/or antagonised many. Yet according to Fernanda Solarzano – who interviews the spiky writer-director for us – Mexicans view it more acceptingly. The film and its maker are also the subject of our Forum debate, with regular contributor Jonathan Romney the champion and Argentine critic Quintin the skeptic.

Beyond the Hills, the new film from Cristian Mungiu (4 Months, 3 Weeks, and 2 Days), meets no such disagreement. This consummate closed-world drama concerns the fate of a nun in an Orthodox religious community and the friend who visits to persuade her to leave. As the letter’s besotted behaviour becomes more erratic, the nuns and their priest become convinced the visitor is possessed. Edward Lawrenson’s interview with Mungiu brings out the thinking behind this clash between abstract ideas and concrete events.

To make a movie that’s mostly confined to the interior of a car is the kind of low-budget challenge Chilean director Dominga Sotomayor clearly relishes. Thursday to Sunday follows a family – mother, father and two children – on the road from Santiago to the north of Chile, during which journey the marriage comes apart – as witnessed somewhat elliptically by the daughter, and described here by Mar Diestro-Dópido.

The inimitable David Thomson turns his attention this month to John Boorman’s magnificent thriller classic Point Blank, arguing that, in its splendid audacity and primal unleashing of Lee Marvin, it has lasted much better than the film it was up against in 1967, Bonnie and Clyde. Alongside that John Wrathall looks at other movie incarnations of Parker, the Richard Stark protagonist on whom Marvin’s Walker is based.

Our visual treat this month is a stunning display of Indian movie posters, with annotations by Divia Patel. These include a much wider variety than the garishly thrilling Bollywood posters we’re all used to.

Following his glittering success with the Olympics opening ceremony and consequent elevation to the status of national treasure, Danny Boyle has returned to much darker matters. Inspired by the work of Nicolas Roeg, his new film Trance is set in London, but it’s not a celebration of the city – it’s a film that even the director describes as “cruel”. Interview by Ryan Gilbey.

Her subtle performances in films such as I’ve Loved You So Long and Leaving have made Kristin Scott Thomas as popular in France as she is in her native UK, where parts for older women seldom offer such scope. But how do perceptions of her vary on either side of the Channel? By Ginette Vincendeau.

Eclipsed by Bonnie and Clyde on its release in 1967, John Boorman’s Point Blank endures as the most mysterious of US crime movies, a potent mix of violence and surrealism. By David Thomson.

PLUS From Lee Marvin to Jason Statham, a rogue’s gallery of actors have had a crack at playing crime literature’s most redoubtable armed robber, Parker. By John Wrathall.

An excellent successor to his 2007 Palme d’Or-winner 4 Months, 3 Weeks and 2 Days, Romanian director Cristian Mungiu’s Beyond the Hills is a sombre, provocative and unsettling story of life in an Orthodox convent. By Edward Lawrenson.

Are we nearly there yet?

Set largely in the back of a car during a tense family roadtrip, Thursday till Sunday is a striking debut for Dominga Sotomayor, and further evidence of the growing diversity of Chilean cinema. By Mar Diestro-Dópido.

The Devil in the detail

In one of the most notable controversies of last year’s Cannes Film Festival, the acclaimed Mexican director Carlos Reygadas (Silent Light) drew fire for the perceived incoherence of his – dazzling or baffling – new film Post Tenebras Lux. But he’s not one to take criticism lightly. By Fernanda Solórzano.

Works of great beauty and artistry in their own right, Indian film posters also give fascinating insights into the transformation of the nation’s film industry and culture in the century since the subcontinent’s very first feature film was released in 1913. By Divia Patel.

Object Lesson: Hannah McGill on the significance of birthday cakes.

The Numbers: Charles Gant on how British audiences said yes to No.

Overview: Geoffrey Macnab on the turbulent state of UK distribution.

Nick James is heartened by the quality of this year’s Berlin selection.

Jaime Pena on how thge town of Guimarães in Portugal became a mecca for arthouse directors.

Agnieszka Gratza peels back the covers on the Belfort Film Festival.

Soundings: Frances Morgan tunes in to the songs that mean something special to characters in films.

Primal Screen: Kevin Brownlow looks back at a 1925 version of Les Misérables.

Bradlands: Brad Stevens hunts down the uncredited work of great directors in films credited to others.

Lost and Found: Dan Callahan marvels at the unique charms of Zoo in Budapest.

Neighbouring Sounds
Reality
Side Effects
The Spirit of ’45

Other releases reviewed in this issue

Dan Callahan is intrigued by Robert Altman’s largely forgotten 1969 That Cold Day in the Park.

David Thompson looks back at the high and low-culture offerings of 1960s series Tempo.

Nick Pinkerton dips in to a book of interviews with Abraham Polonsky.