As an ex-con country singer who dreams of switching Glasgow for Nashville, Buckley turns in an exceptional performance in Tom Harper’s assured musical drama.

“You’re going to be the next Dolly Parton.” That’s the early assertion of a friend to Rose-Lynn Harlan (Jessie Buckley), a flame-haired girl with a big voice and even bigger dreams of becoming a country music star. But Rose-Lynn is a million miles from Nashville – banged up in a Glasgow prison on a drugs charge with, on her release, two small kids to look after and very little in the way of income. A star is not so much born as pulled back down to earth, kicking and screaming all the way.

Indeed, the power and poignancy of this feature-writing debut from TV scribe Nicole Taylor (Three Girls) comes not from the usual message that we can all realise our ambitions if we just believe in ourselves enough. Wild Rose spins no such fairy story; this is a real-world tale of hard knocks and even harder truths. Yet it is no sombre lecture. With Buckley giving a breathtaking, force-of-nature performance, much like the one she deployed in last year’s Beast, it becomes an uplifting tale about the benefits of reshaping your dreams to fit your circumstances.

Like the exceptional actress playing her, Rose-Lynn has talent in abundance and more than enough self-belief to get to where she wants to be. The wide grin that forms on her face as she listens to Primal Scream’s Country Girl on the bus from prison (“You better go back to your mama, she’ll take care of you”) speaks volumes about what this music means to her. Such things prove, however, to be no match for the realities of life as an ex-con single mum. To the increasing frustration of her loving but wearily down-to-earth mother Marion (Julie Walters), Rose-Lynn consistently puts her dreams above her kids, dumping them on friends and neighbours in order to sing – or drown her sorrows – at the local bar. 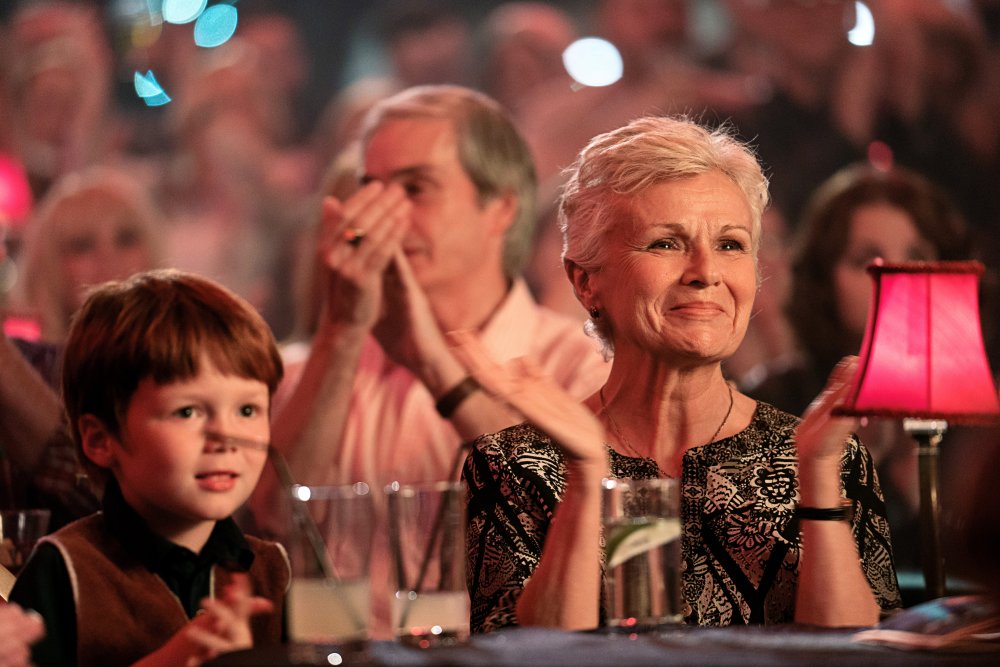 Forced to get a job, Rose-Lynn becomes a cleaner for local businesswoman Susannah (a compassionate Sophie Okonedo), who hears her new employee sing as she works and recognises her remarkable talent; soon Susannah is using her media connections and wealthy friends to help Rose-Lynn on the road to Nashville. That Rose-Lynn lies about having any children means Susannah is ignorant about the responsibilities she is inadvertently helping the young woman to ignore.

While Rose-Lynn may spend the majority of the film being pulled in two directions, this is no diatribe about the pressures of having it all, nor a finger-wag to those women who would choose ambition over – or even alongside – motherhood. Rose-Lynn simply doesn’t operate within such defined parameters. She marches to the beat of her own drum, seeming to act entirely on impulse, taken over by the music she loves. In those moments, responsibility doesn’t even factor into her thought process.

In a role that demands a great deal, not least a huge amount of singing, the phenomenal Buckley is pitch-perfect. Even when she’s raging blindly (or drunkenly) against the world, her vulnerability is never far from the surface. With circumstances having forced her into a claustrophobic corner, her desire for escape is understandable. That’s particularly true when she sings, her passion, rage and feelings of being trapped distilled via well-chosen tracks – Chris Stapleton’s Outlaw State of Mind, Wynonna Judd’s Peace in This House, Bruce Springsteen’s Born to Run, alongside original compositions – that showcase Buckley’s incredible range and effectively plot the twists and turns, highs and lows, of her character’s emotional journey. 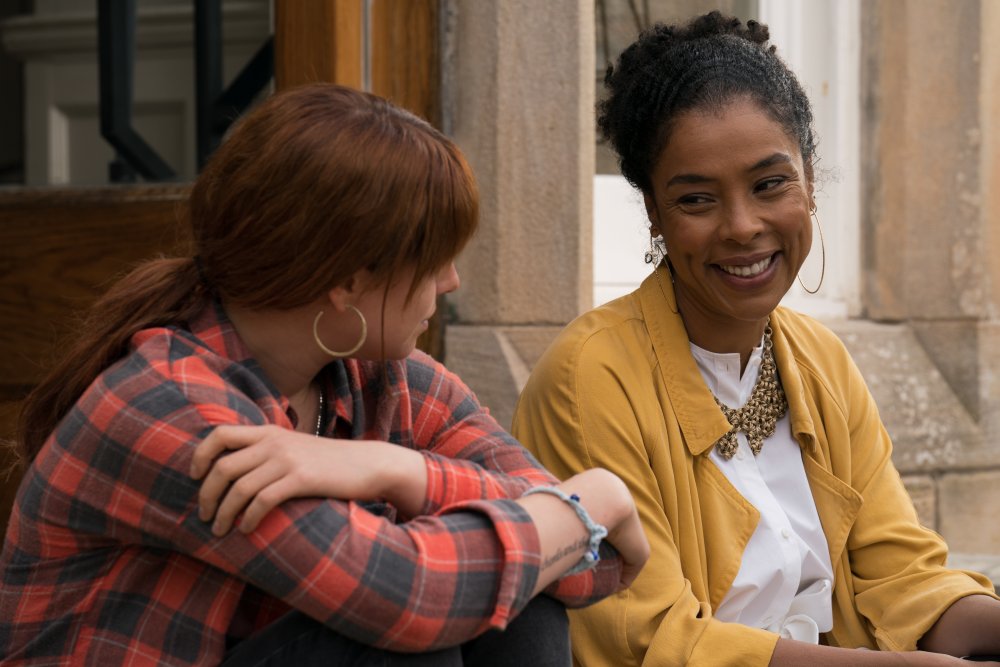 Buckley with Sohie Okonedo as Susannah

That journey isn’t just the one to Nashville and potential fame, but also a navigation of the rocky interactions with her mother and her children. Woven into Taylor’s screenplay is an astute observation of parental relationships, with Walters’s Marion in particular expertly walking that delicate line between wanting to support her daughter and allowing her to continue to make her own mistakes. While Marion recognises Rose-Lynn’s talent, she’s also clear in her opinion that any flights of fancy need to come second to her responsibilities, and resolutely maintains that position even as Rose-Lynn rails against it. Quieter moments, too, in which Rose-Lynn sits alone in her cramped flat, the wind knocked out of her sails by the fact that she is entirely unsure about how to be a parent, about who to be if she isn’t on a stage, also ring with a familiar truth.

Performances are matched by assured, sensitive direction from Tom Harper (The Scouting Book for Boys, 2009; TV’s War & Peace, 2016), who once again showcases his instinctive ability to guide the viewer to the raw heart of his characters. While Rose-Lynn may be chasing a limelight coveted by myriad protagonists in films from Fame (1980) and Pitch Perfect (2012) to Begin Again (2013) and multiple versions of A Star Is Born, Harper avoids any hint of genre cliché; there are no tense auditions, no soft-focus montages, no pep talks from life-hardened mentors. Crucially, too, there is no melodrama or self-pity; Rose-Lynn’s fire and fury, and her no-nonsense Glasgow attitude, fuel her narrative.

Cinematography, from regular Harper collaborator George Steel, is similarly impressive, and expressive. Glasgow is painted in washed-out greys, while Rose-Lynn’s home is shadowy and oppressive; by total contrast, the moments when she sings are bright with colour, a sense of freedom and optimism filling the frame whatever the tempo. Just as a sequence in which Rose-Lynn makes a crowdfunding video for Susannah, singing directly into the camera with the voice of an angel, is powerful in its simplicity, so scenes where she dominates the stage, complete with rousing backing band, have the palpable energy of a live gig.

Tellingly, when Rose-Lynn finally gets to Nashville it is awash with sunlight, a land of opportunity compared to the supposedly dour streets of Glasgow. Or so it seems. But Rose-Lynn soon realises that it’s a city chockfull of talented dreamers; her taxi driver has a trunk full of his own CDs; every open-mic night is mobbed. Taking a tour of the famous Grand Ole Opry, she sneaks away to find the stage and, joined by a couple of sympathetic musicians, belts out a euphoric rendition of Wynonna Judd’s When I Reach the Place I’m Going. The result is not applause and immediate stardom, but an invitation to leave the premises. “You will not believe how many people do that,” shrugs the security guard as he escorts her out. While it may subvert the traditional happy ending, it is no bum note; rather, a much needed moment of clarity that sees Rose-Lynn heading for home, determined to focus on the things directly in front of her.

Early on in the film, Rose-Lynn explains her love of country to Susannah by describing its straightforward nature, the fact that it is fundamentally “three chords and the truth”. By story’s end, this has become a neat metaphor for her own acceptance of her place at home in Glasgow, doing what she loves with her two kids firmly by her side. As she takes to the stage at the city’s own Grand Ole Opry a year later, bringing the house down with the self-penned Glasgow (No Place Like Home), which she dedicates to her mother (“I should have said thank you 1,000 miles ago”), there is the sense that she has come full circle. Rose-Lynn may have realised that there “ain’t no yellow brick road”, but is finally willing and able to embrace the homegrown love and support referenced in that early prison bus rendition of Country Girl. And the pure joy of that can be felt in every note.