Does Lord of the Rings director Peter Jackson’s colourising of archive film of WWI soldiers make them more or less real to us? The critics and archivists who argue it’s a travesty have got it wrong. 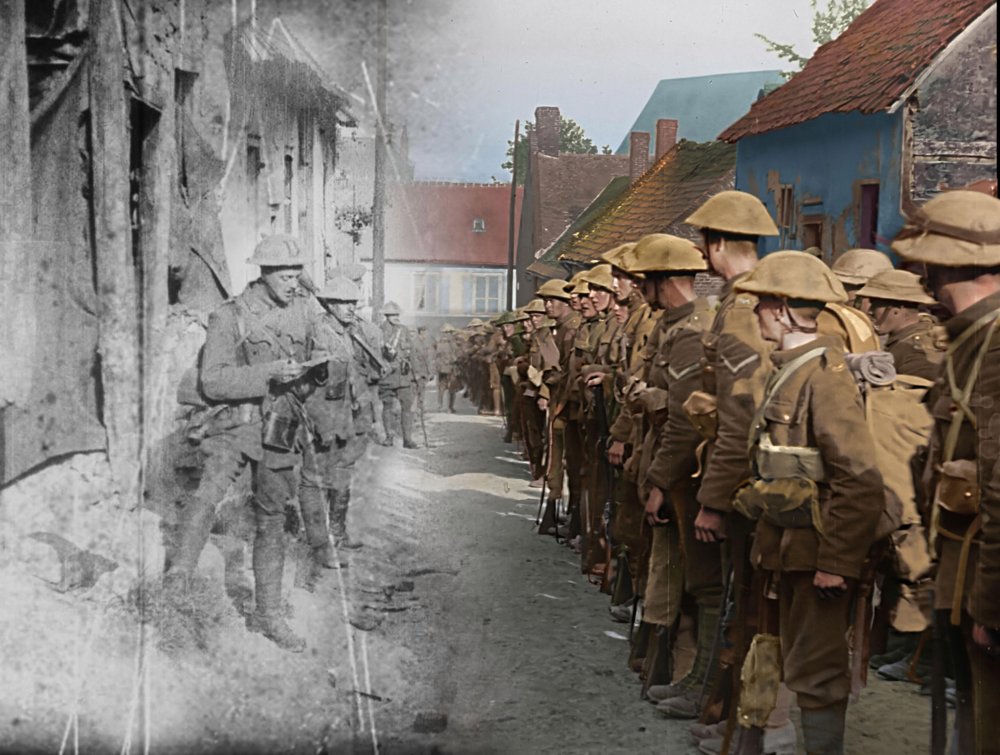 Strange meeting: a frame from They Shall Not Grow Old demonstrating its colourisation effect

Re-presenting archive film has always been risky, except when it’s too dull to stir any emotion. I remember the condescension that hung over the first presentation of Kevin Brownlow’s reconstructed Napoleon in 1982, when the idea of piecing together this battered and much-reviled carcass, with a patchwork orchestral score, seemed absurd to many. But as one of the visiting archivists, Jacques Ledoux, said: “It shouldn’t work, yet somehow it does.” And later, Bill Morrison’s and Peter Delpeut’s first films collaged from decaying nitrate fragments could rouse archivists to fury, for celebrating of the decay they deplored.

Now Peter Jackson’s strange, experimental collage of World War I footage faces a new scepticism on many fronts. Few critics I’ve read (and many are friends and respected colleagues) want to disapprove outright of digital colorisation (which of course destroys nothing) – but they find it ‘badly done’, and disapprove strongly of Jackson’s zooming in on detail, and overall reframing. Much of the criticism argues that this treatment of the archival footage renders it ‘less real’ than in its more familiar black and white academy ratio forms.

I beg to differ. Seeing They Shall Not Grow Old in a public screening at the Phoenix Cinema in North London (in 2D, and after a heated meeting to debate the cinema’s future) I found myself launched on a reflective journey into another distant realm that Jackson has created. We begin in a simulated ‘archival’ register, with monochrome footage imperfectly speed-corrected on a small screen, recalling how most will previously have seen such material. There’s nothing ‘real’ about it, except that this is how it’s been shown during the last 50-odd years. In fact, if you want to come close to the ‘reality’ of the Western Front, the numerous stereo photographs taken in the trenches will still take you there with a shocking immediacy (which for me gives Jackson’s use of 3D extra justification that I’m keen to see). 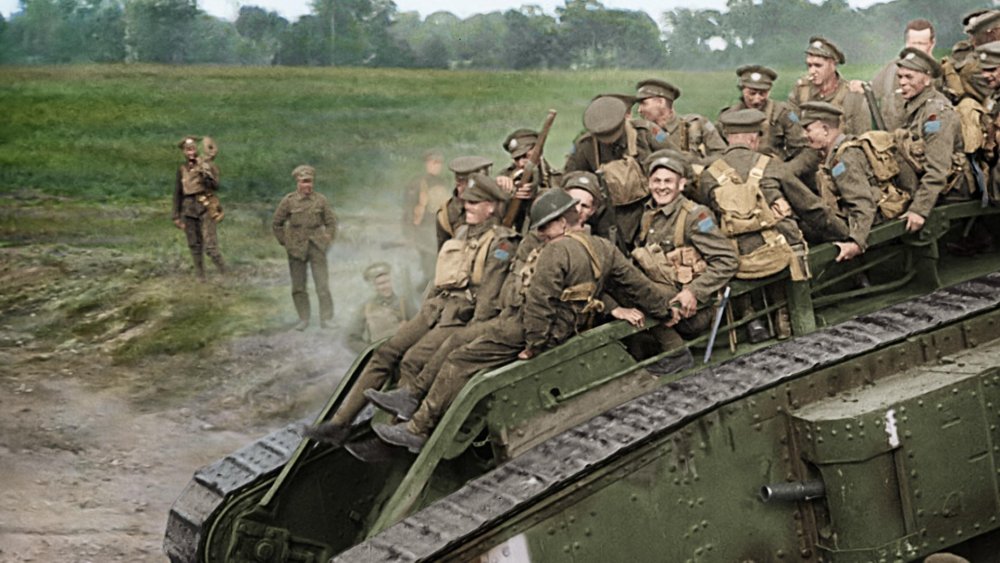 But after this prelude, accompanied by voices reminiscing about the build-up to embarkation for the front, we too are transported to this ghastly, yet mundane world. It’s not grey and silent, as Gorky described the eeriness of his first encounter with film in 1896. It’s a world we are visiting, with the filters of monochrome and archaic framing removed, and within a sound tapestry that includes both the ‘real’ (even if not contemporary) and the re-voiced reminiscent. More like Virginia Woolf’s account of the eeriness of being present in scenes which are independent of us, while their denizens constantly acknowledge our presence by performing to camera.

Jackson has fashioned his film as a visit to this distant world, in which too many of our forefathers spent months and even years. By the time we leave it, in the film’s coda, we understand all too well why few of the returning ghosts wanted to speak of it. They quickly discovered that no-one who had not been part of it could understand the experience; and in fact that few wanted to know, before the first round of filmic re-creation began a decade later. But we have been on a surreal visit, sharpened and enhanced by the novelty of flesh, dirt and the blood and mutilation that we were long shielded from by censorship (although not always in painting, as the recent Tate Britain show Aftermath revealed).

What seems strange to me is the concentration in commentary on pseudo-technical criticism, avoiding the larger issues of how we can relate to this distant era that clearly intrigue its maker. Blood, flesh and grass the ‘wrong colours’? Pigeonholing Jackson as a ‘fantasy’ filmmaker? More relevant would be considering the very different status of WWI memorialisation in his native New Zealand, where it remains a cornerstone of national identity. 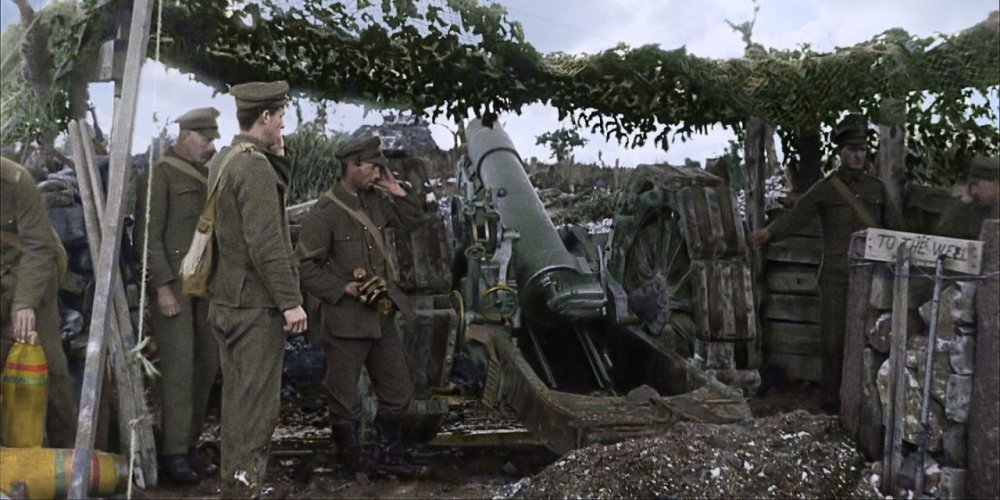 And even more relevant would be the considerations that emerge from Catherine Russell’s important new book Archiveology, which takes Walter Benjamin as its guide through the varieties of contemporary archival practice. Few of the filmmakers discussed by Russell – ranging from Angela Ricci Lucchi and Yervant Gianikian, creators of From the Pole to the Equator, to such diverse figures as Joseph Cornell, Morgan Fisher, Harun Farocki and Gustav Deutsch – have considered archival material a sacred text. Instead, they treat it as ‘second nature’, material traces of the past that are available for contemporary renegotiation, making use of what Jaimie Baron has termed “the archive effect”.

Tellingly, Russell pinpoints the difficulty in classifying the diverse forms of ‘archival effect’ films that digital production offers us. ‘Compilation’, ‘found footage’, ‘collage’ all invoke historic moments in working with pre-existing footage. Currently we favour ‘essay’ as a capacious category, with the option of a qualifying ‘avant-garde’ or ‘experimental’. But the truth is that we are living in an age of proliferating formal invention, although the circumstances of Jackson’s project seem to have limited discussion of the film’s form as nothing other than ‘memorial’.

Russell’s stimulating survey is laced with quotations from Benjamin’s never-completed archival project The Arcades, and one of these seems apposite to They Shall not Grow Old:

At any given time, the living see themselves in the midday of history. They are obliged to prepare a banquet for the past. The historian is the herald who invites the dead to the table.

Jackson’s project seems to me truly phantasmagoric, in Benjamin’s terms. A ‘strange meeting’, to invoke Wilfred Owen’s unforgettable image, with archival ghosts in our digital midday.

Related to They Shall Not Grow Old review: Peter Jackson brings controversial colour to WWI footage