The Guardians review: a cruel betrayal on the home front

In Xavier Beauvois’s beautiful new film, Nathalie Baye is magnificent as the matriarch overseeing home and harvest during the First World War, while her son falls for her new farmhand Francine. 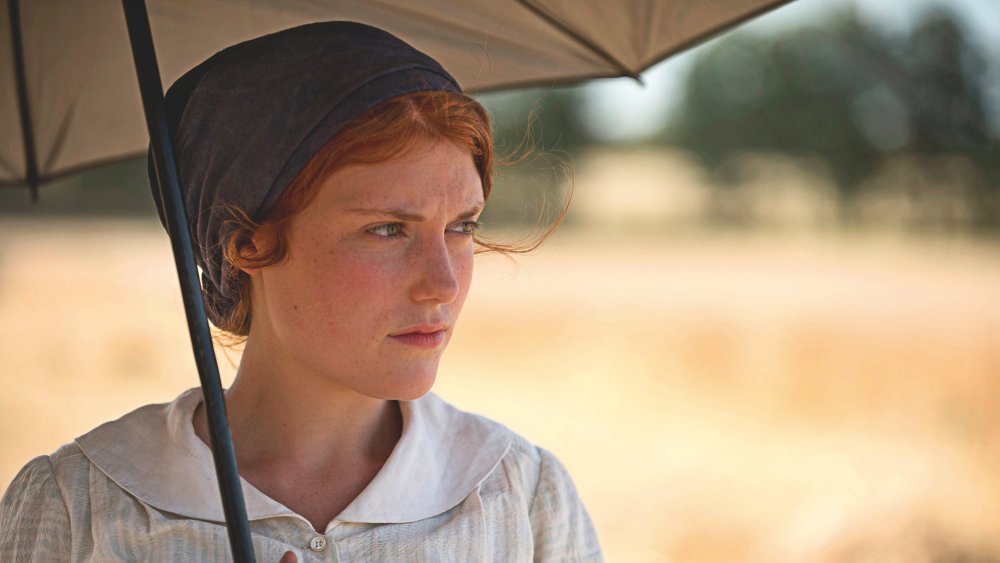 Iris Bry as Francine in The Guardians

The opening images of Xavier Beauvois’s The Guardians present two views of the cruelty of war. On either side of a card announcing the year as 1915 are two shots, presumably from two separate regions of France but by implication simultaneous. The first is a group of fallen soldiers, faceless behind their gas marks and immobile on the earth. The second is an elegant wide shot of farmland, with a grey-haired woman driving a horse-drawn plough. While the horrors of the battlefield will impinge on this home-front drama, through letters and dreams, Beauvois’s film will not veer so close to combat again. The guardians of the title are the women who tend the earth during the agonising absence of their menfolk. It’s a truism that the war changes a man, but in The Guardians it leaves deep mental scars on women, too.

The grey-haired woman is Hortense (Nathalie Baye), running the family farm with her daughter Solange (Baye’s own daughter Laura Smet) while her two sons Constant and Georges and son-in-law Clovis are fighting in the Great War. Her husband Henri, fidgeting with his gnarled arthritic hands and applying his technical know-how only to his still and the production of wine-soup, is a shadow of a patriarch, and takes no part in either the farm labour or management. Henri is played evocatively, and tersely, by Gilbert Bonneau, a 78-year-old former farmer who answered an open casting call. The story of The Guardians concerns the arrival of orphan Francine (the debut of another street-cast amateur, Iris Bry), a maid who will share the burden of the farm work. She’s a strong, capable worker and well liked by the family – especially Hortense’s son Georges (Cyril Descours) during his visits home on leave – even if she is underappreciated by them.

The film is based on the novel by Ernest Pérochon, a schoolteacher who himself served at the front during World War I. The novelist’s experience may influence an early, haunting scene in the film, in which Constant returns on leave to his old workplace, the classroom, and suddenly finds it impossible to speak to the expectant innocents sitting in front of him. Producer Sylvie Pialat gave the novel, which has never been translated into English and which was a favourite of her grandfather’s, to Beauvois to adapt. In the years since his last films, The Price of Fame (2014) and the award-winning Of Gods and Men (2010), The Guardians appears to have been a labour of love for both producer and director.

It’s a betrayal in the domestic realm, rather than the tragedies reported from the front line, that forms the crisis of the drama – an act of treachery that constitutes a war crime within the women’s world of work, grief and preparations for peace. Repeated images of women labouring, the changing of the seasons, the devastating appearance of an official bringing news from the trenches all prolong the film’s generous running time. While it covers five years, with each changing date marked diligently by intertitles, the scope of The Guardians may seem perversely intimate, given the backdrop of global events. However, the betrayal, when it comes, is driven by a desire to preserve land and status, to control a lineage – reasons that have caused many a state to enter into armed conflict or negotiate mercilessly in its aftermath. 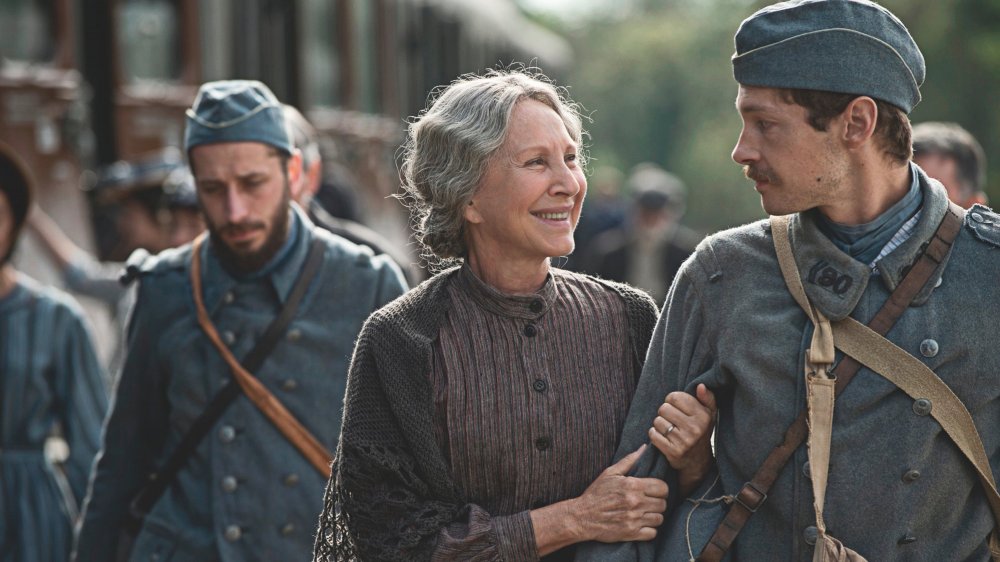 Nathalie Baye as Hortense and Cyril Descours as Georges

The Guardians is also an unignorably beautiful film, bursting with Caroline Champetier’s painterly and serene compositions of the fields and forests soaking in mist or illuminated by golden early evening sunlight. While these beguiling images risk accusations of prettification, of glossing over the deprivations of wartime with luscious photography of the Haute-Vienne landscape, they could also be taken as an invitation for further scrutiny. Look more closely at the scenes and it’s clear that what makes them so picturesque is also what makes them so pitiful. That there are young women working in the fields, with their long skirts brushing the grass, is a sign that the men are away at war, and the ‘guardians’ must perform a double labour, of raising both children and crops, often without the physical strength or tools they need.

Most powerfully, these women are shown hacking neatly at the haystalks with hand scythes in one extended and especially elegant tracking shot of the harvest. It’s a testament not to rustic charm but to the poverty of the farm-owners, who must cleave to 19th-century methods until they can afford modern mechanised solutions – such as the ones Constant reports seeing at the front, where the machine age is reaping its own crops. While Hortense and Solange may yet find the wherewithal to modernise the farm, they remain mired in an older way of life, awaiting the men to take up the reins again, and approve their improvements. Francine, forced into a corner by circumstances, is the only character who learns how to modernise herself, facing the 1920s with a new outlook, not to mention a chic appearance.

Even the attractive chalk-blue paint that brightens the woodwork of the cottages and farm buildings echoes the uniforms of the soldiers, who carry the injuries and horrors of battle with them. It’s a horror that is ever-present even miles away from the action. When the workers pause to eat in the middle of the day, the beauty drains from the screen as, without the distraction of their labours, they fall silent, glum, exhausted and lost in thought. Solange compares the agony of awaiting her husband’s return to living in a bad dream, a psychological torture. 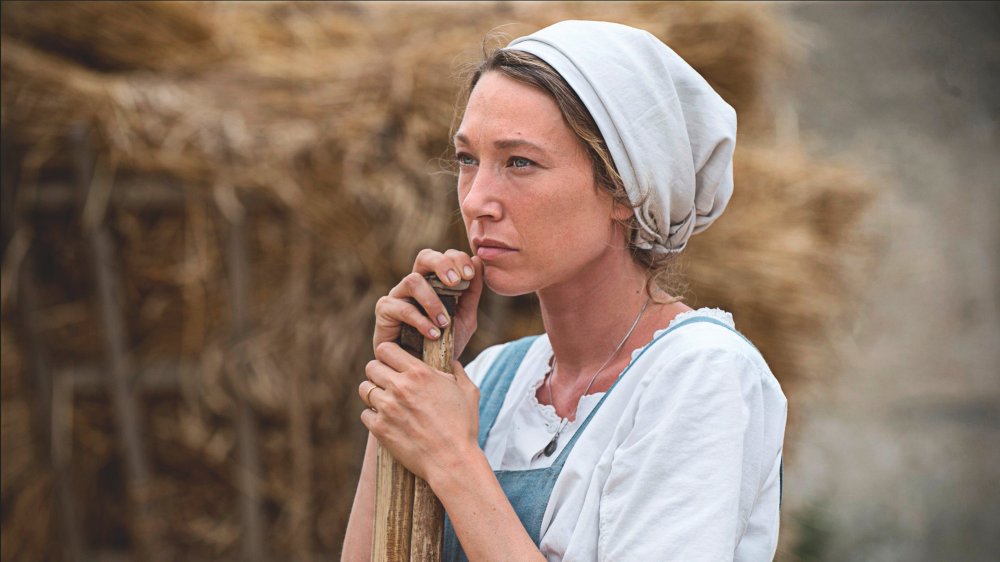 The film has such a nuanced relationship with cinematic beauty that what is seen and what is hidden within the image are equally important – as when Francine and Georges make love discreetly behind a boulder but are betrayed by an untouched picnic basket lying a few steps away. Prettiness itself is implicitly a trap, encouraging a dangerous intimacy and comfort. It’s when peaceably moulding butter pats with floral motifs that Hortense and Francine become close, and make plans for the future. It’s a moment of fleeting happiness and confidence that is crushed by two subsequent brutal blows from the front, and it exacerbates the agony of what lies ahead for Francine. Such rushes of emotion are to be feared. Michel Legrand’s score appears on only a handful of occasions, bursts of music that underline a moment of expectation, as when Francine first arrives at the farm, or wash over a terrible sorrow, such as Hortense’s reaction to the death of her son. Francine provides much of the film’s music herself, singing sweetly old-fashioned songs around the farm.

Although newcomer Bry is a captivating presence, doing an impressive job of carrying much of the film and its emotional weight, and Smet broods powerfully as the tormented Solange, this is unmistakably Baye’s film. As the magnificent Hortense, she conveys the isolation of her position and her grief as a bereaved mother exquisitely, with a steady gaze and a trembling frame. And when the mood of the film turns, she turns with it – her role deepening to accommodate both Hortense’s pragmatic inflexibility and her terrible regret.

As the priest says, at one gloomy Mass where the names of the latest war dead are declaimed to a congregation of stricken women, we should “take pity on those who weep”. The Guardians is a rewarding and rich film, which offers a delicately considered and often troubling insight into the lives of those left behind by history: those who, in the priest’s words, “still drain the bitter cup of life” while others march to their death.

Related to The Guardians review: a cruel betrayal on the home front