Spider-Man: Into the Spider-Verse review: a wider webbed world

The original Peter Parker is joined by five new iterations of the arachnoid superhero in this mercurial and visually dazzling caper. 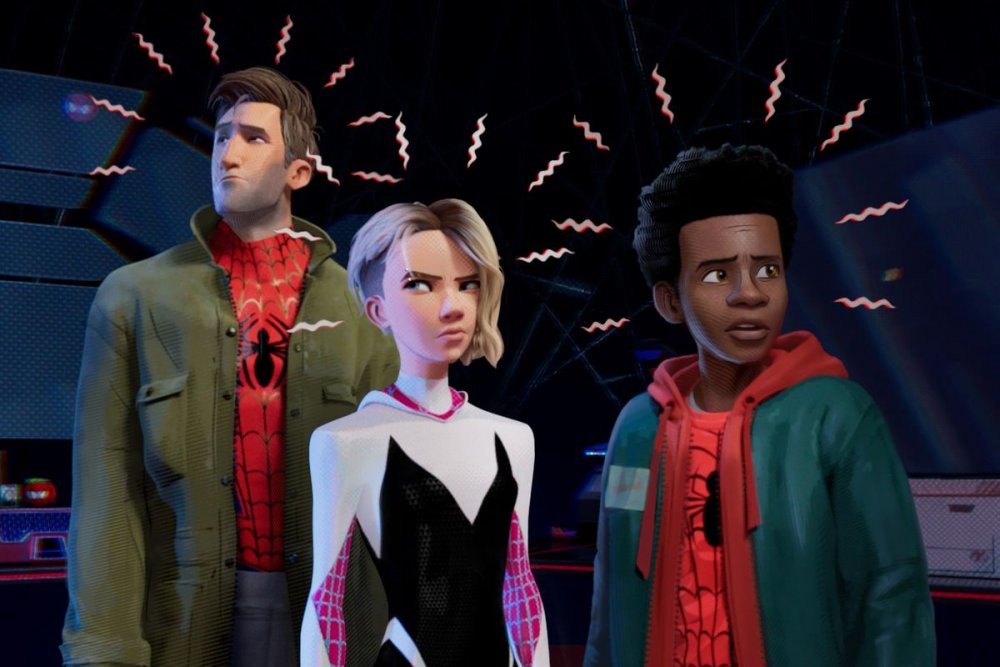 Spider-Man: Into the Spider-Verse

Peter Greenaway once remarked that “the two huge mythological narrative systems that have created European culture – the Greek and Roman mythology and the Judeo-Christian heritage”, knowledge of which was “necessary for a full comprehension of European imagery before 1850, and often after that date”, had lost “influence and presence” in the course of just a few decades. And yet he also reckoned that the “archetypes and allegorical figures” provided by these traditions lay behind “Superman, or the Joker, or James Bond or Madonna” – or Spider-Man – and these surely did not require the same kind of education to be comprehended.

The question that Spider-Man: Into the Spider-Verse raises, quite consciously, is whether one needs a different kind of education to comprehend or, better yet, enjoy these things. It begins knowingly, with the familiar Spider-Man, voiced by Chris Pine, mock-grudgingly bringing us up to speed – since we all know the story of Peter Parker, the boy who was bitten by a radioactive spider and kissed Kirsten Dunst upside down, don’t we. Or don’t we?

Anyway, while old Spider-Man is doing his stuff amid the skyscrapers of Manhattan, the focus shifts to a Brooklyn teenager, Miles Morales, who is – that’s right – bitten by a radioactive spider and discovers he has special powers. The twist, or one of them, is that Miles (voiced by Shameik Moore) learns how to use them by reading Spider-Man comics and buys his suit off the peg. Naturally, it turns out that he must become Spider-Man.

By this point, what is overwhelmingly apparent is the film’s mercurial visual quality. The animation races through visual registers, without obvious design, from the near-photographic imagery of the New York streets to the retro cartoonish, to the dotty comic-strip style adopted when Miles begins to change, replete with panels-within-panels to show what he’s thinking about. It moves faster than a particle in a particle accelerator – which, we gather, is fast enough to somehow mash various dimensions together.

So it is that Miles is apprenticed under a motley assemblage of five full-fledged Spider-creatures from five parallel universes – chiefly a loser version of Peter Parker who gave up (winningly voiced by Jake Johnson) and Spider-Woman (Hailee Steinfeld), but also Spider-Ham (aka Peter Porker, an actual pig), anime Peni Parker and her giant robot, and best of all Spider-Man Noir, a monochrome 1930s throwback, played by Nicolas Cage, who says things like “we don’t pick the ballroom, we just dance”. In this realm, the somewhat light-touch moral of the earlier films, “with great power comes great responsibility”, is a corny line everyone’s heard, and the Jake Johnson character maintains a running commentary on the conventions being observed without becoming annoying.

The post-credits stinger is a reference to a meme, appropriately enough. To answer Greenaway, who may well have overestimated previous centuries’ familiarity with classical literature and even the Bible, no prior knowledge of this recondite material is required for its enjoyment. Spider-Man: Into the Spider-Verse is funny in itself and visually dazzling for its own sake.