Rocketman review: an out and proud Elton John musical biopic

Dexter Fletcher’s take on the rock ’n’ roll history of Reginald Dwight is kinetic, poignant and, above all, refreshingly open and celebratory about its gay protagonist’s sex life. 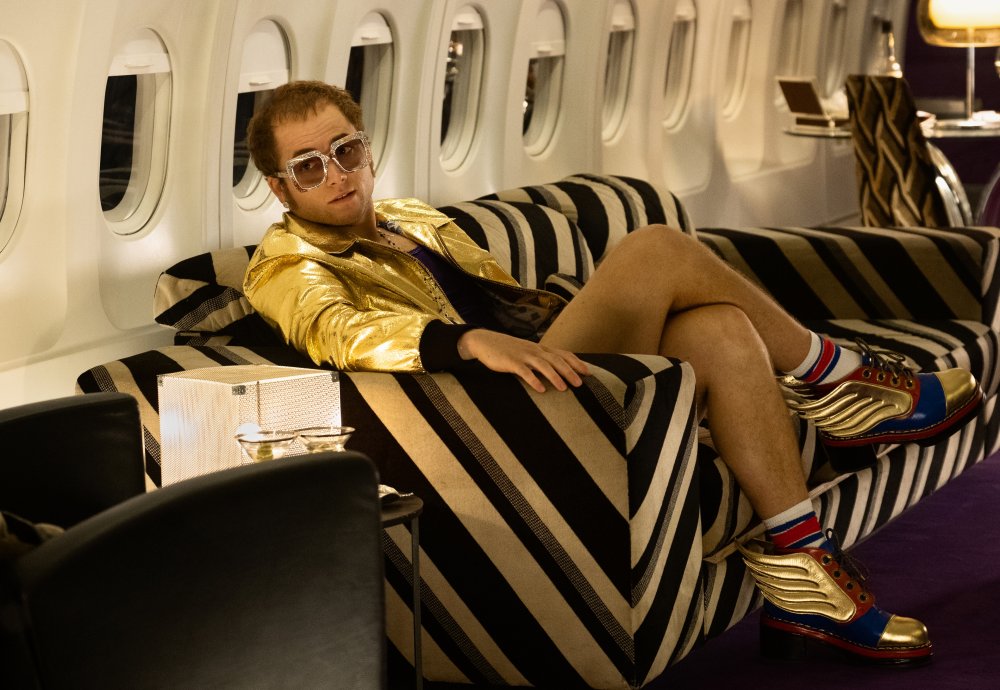 Doors are thrown open. Light fills the hallway. A demon appears in silhouette, striding with a swagger that radiates all the way from his enormous feathered wings to the soles of his platform shoes. The wild-child figure glistens with rhinestones, eyes framed by sequined hearts that assert him as king of spectacle, theatre, high-camp drama. He pauses.

He addresses the rehab group that he has just interrupted. And then, looking straight to camera, he reveals his devil-may-care attitude as artifice. “My name is Elton Hercules John and I’m an alcoholic.” He is also a self-confessed cocaine addict, sex addict, a shopping addict, and a fragile man whose difficulty finding and receiving love is the narrative impetus for the film. He is Rocketman, and his words set the scene for a movie that delivers on the sex and drugs always promised in stories about rock ’n’ roll.

With the group therapy session at the film’s core, Elton John (Taron Egerton) reflects on his transformation from suburban child piano prodigy Reggie Dwight into a global superstar. Encountering one another at pivotal moments throughout the film, young Reggie and world-weary Elton must help one another face parental abandonment, domestic abuse and the challenges of being a gay man in a homophobic world. At times poignant and affecting (this film comes with a tearjerker warning), Rocketman (directed by Dexter Fletcher) is bold in its depiction of John’s struggles and addictions. Fortunately, in this respect it is not cut from the same beige cloth of Bohemian Rhapsody and it successfully avoids the tragic clichés of gay representation that so often plague mainstream cinema. Rather, it ramps the camp up to 11, throws on some sequined spectacles, and sparks fireworks of pure joy in glitzy song-and-dance routines set to I Want Love, Crocodile Rock and Your Song. 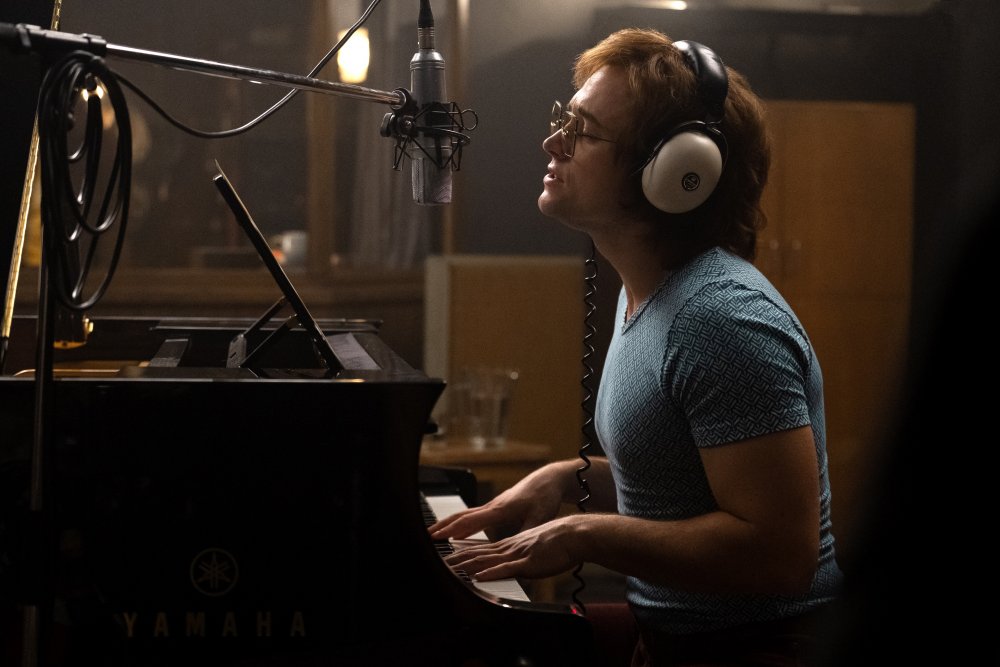 This is a genre-bending musical biopic that reworks Elton John’s greatest hits into dazzling choreographed setpieces. While Rocketman does occasionally feel contrived – with the early childhood scenes bordering on formulaic – the musical numbers are its greatest strength and add unexpected surrealism. Beautifully rendered visual effects are accompanied by dizzily rotating cameras, for example, which give the impression that the film apparatus itself is dancing along to the music. There is also a wonderfully orchestrated sequence in which Elton is rescued from a suicide attempt, attended by a medical team and seamlessly repackaged into one of his trademark flamboyant costumes to launch into his next show.

The honesty with which Rocketman treats medical intervention and the behaviour that necessitates it is refreshing – there are stomach pumps, lines that accumulate into piles of cocaine, and a choreographed club-scene orgy. But what is most remarkable about the film, which could so easily play it straight, is its insistence on talking about and celebrating sexuality. The film never ignores Elton John’s identity as a gay man. Men kiss, caress, and have sex with one another onscreen. A splendidly camp aesthetic draws on drag and the ballroom culture of 1980s New York and the narrative is overwhelmingly positive about gay men finding love, friendship and family life. In many respects it represents a major ‘at last’ moment for big-budget Hollywood movies. Rocketman is out and proud. 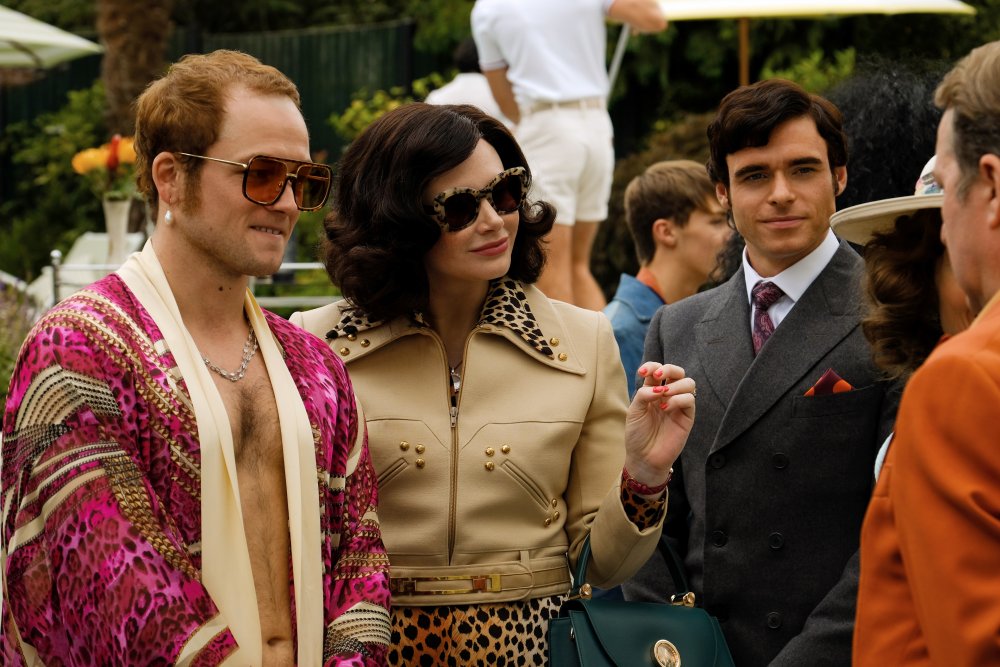 It’s a shame, of course, that an out gay man did not direct or take the lead role in the film. Egerton’s performance overall is solid, and with some excellent makeup and costuming he excels in both Elton’s moments of insecurity and his exhilaration. Given that there are so few opportunites available for gay men to play gay characters in mainstream cinema, it’s a pity about the complete lack of onscreen chemistry between Egerton and Richard Madden, who plays Elton’s manager and former partner John Reid. It’s one of the few letdowns in an otherwise uplifting film.

Nevertheless, Rocketman’s ending, which returns through a diamante swirl of outrageous costumes to the group therapy session, makes clear that its heart is in the right place. Stripped of his own heart-shaped specs and speaking from behind a pair of simple gold-rimmed glasses, Elton makes peace with both his childhood self and the demons that have overwhelmed him on and off stage. It’s one of the most moving moments of the picture. If you come to Rocketman expecting a generic Sunday-afternoon matinee you’ll be sorely disappointed – this is unrelentingly dazzling mashup of musical and bio-pic drama. So expect the unexpected – and give this feelgood gay-positive film the love that it demands.

Related to Rocketman review: an out and proud Elton John musical biopic