The Laundromat review: a light jest in the swamps of dark money 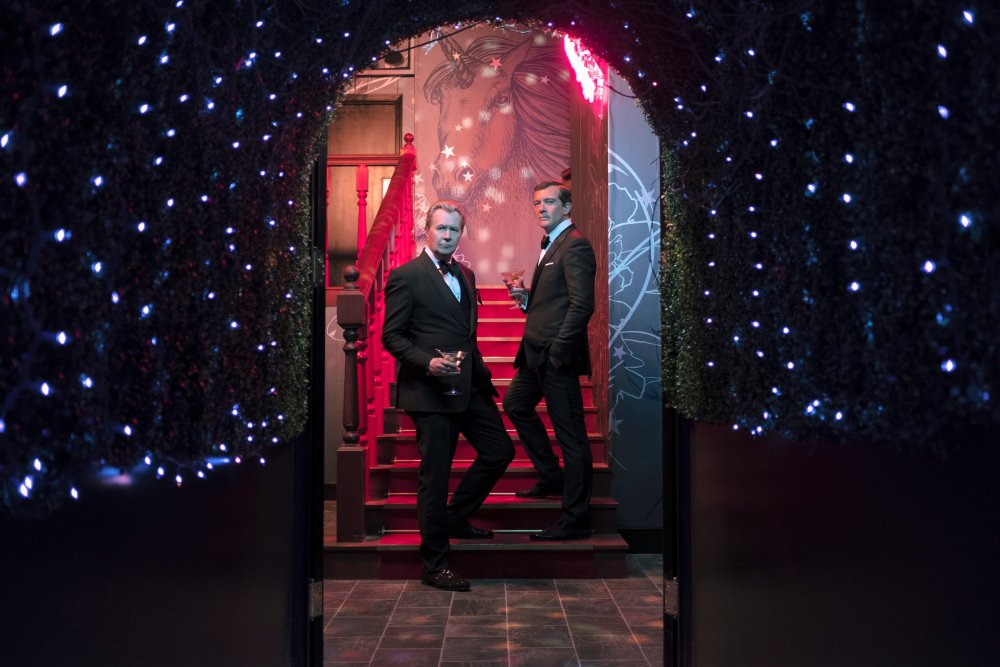 The leak of the so-called Panama Papers in 2015 brought more than 11 million documents into public view and revealed the client list of Panamanian law firm Mossack Fonseca. This included wealthy politicians and criminal characters alike, who’d used the firm’s services to set up offshore shell companies and hide their money from taxation. Ample material there for a forensic documentary exposé from the likes of Alex Gibney. But director-cameraman-editor Steven Soderbergh and screenwriter Scott Z. Burns opt for a very different approach, with known facts and real-life personalities contributing to an often light-hearted affair, bolstered by the avowed purpose of taking US lawmakers to task for their weak record of oversight.

From the outset, there’s a tension between the portentous subject matter and the delivery, as middle-aged lounge lizards Gary Oldman and Antonio Banderas – sporting spangly monkey suits and, in Oldman’s case, a ve-haf-vays German accent – walk and talk us through a lecture on the history of money, from the earliest barter systems to today’s promissory credit network. We subsequently learn that these two are playing Jürgen Mossack and Ramón Fonseca, founders of the law firm that fabricated tax-resistant paper companies for the world’s wealthy on a virtually industrial scale. Their chummy presenter shtick plays out as smug and grating, but maybe that’s the point, as they sleekly try to absolve themselves of any responsibility for their clients’ criminal activities.

The movie ventures towards something more relatable when Meryl Streep’s housewife Ellen Martin discovers the shocking meaning of ‘shell company’ after her husband drowns in a tourist boating accident and the insurers turn out to be a virtual presence operating from a PO box in the Caribbean. The hinted-at Erin Brockovich underdog fable never quite kicks in, however, the rationale for Streep’s (somewhat overpowering) presence evidently being to deliver a fierce climactic lecture encouraging the US authorities to tackle the money-laundering issue, even if that affects the rich companies who donate to the country’s political parties.

When Meryl speechifies, we listen, though by that point the movie’s wayward progress and flailing attempts at humour have somewhat hobbled its muckraking potency. As we visit the working innards of the offshore banking machine and drop in on vignettes showing how philandering African businessmen and corrupt Chinese political higher-ups alike are tangled in the money-moving network, the overall effect is breezily unpredictable and tantalisingly tricky to pin down. In contrast to the year’s other Burns-Soderbergh collaboration, The Report, a sinewy and sincere look at US military torture tactics post-9/11, this is wispy stuff, which could be read as a ragbag of glittery fragments or a structurally unconventional bringing-together of the whole elusive miasma that is the shell-company arena. While we never quite lose the suspicion that the sheer slipperiness of the material may have defeated the filmmakers, both these interpretations seem simultaneously valid.

True to form, the supposedly post-retirement Soderbergh works through an array of deft scene transitions, startling camera angles and exquisitely framed, garishly appointed interiors, though the trick of using madcap wit to sharpen our appreciation of the underlying iniquities on view doesn’t work nearly as well as it did in his and Burns’s The Informant! (2009). In addition, the jokey expository heavy-lifting carried out by smirking Messrs Oldman and Banderas comes over as a bit passé in the wake of Adam McKay’s The Big Short (2015), which deployed sundry celebrity guests to amusing and enlightening effect in its subprime-for-dummies explanatory flourishes.

While there are certainly elements here that disappoint, there’s also a sense of Burns and Soderbergh applying themselves to a potentially impossible challenge. How do you take important but intractable material, have eye-catching fun with it and still get the salient points across? Someone else may yet deliver the straight-up doc version of these events, but credit to Soderbergh and company for at least trying to educate and entertain in a project that certainly doesn’t look out of place on the big screen but is essentially a Netflix assignment destined for home viewing.

Pitched as a palate-livener for couch-bound audiences who are looking to engage with the issues but maybe don’t want to feel they’re back at school or being made to work too hard, it has its place. Still, a scattering of proper laughs and fewer groanworthy asides would have made it a more amenable viewing experience all round.

Related to The Laundromat review: a light jest in the swamps of dark money