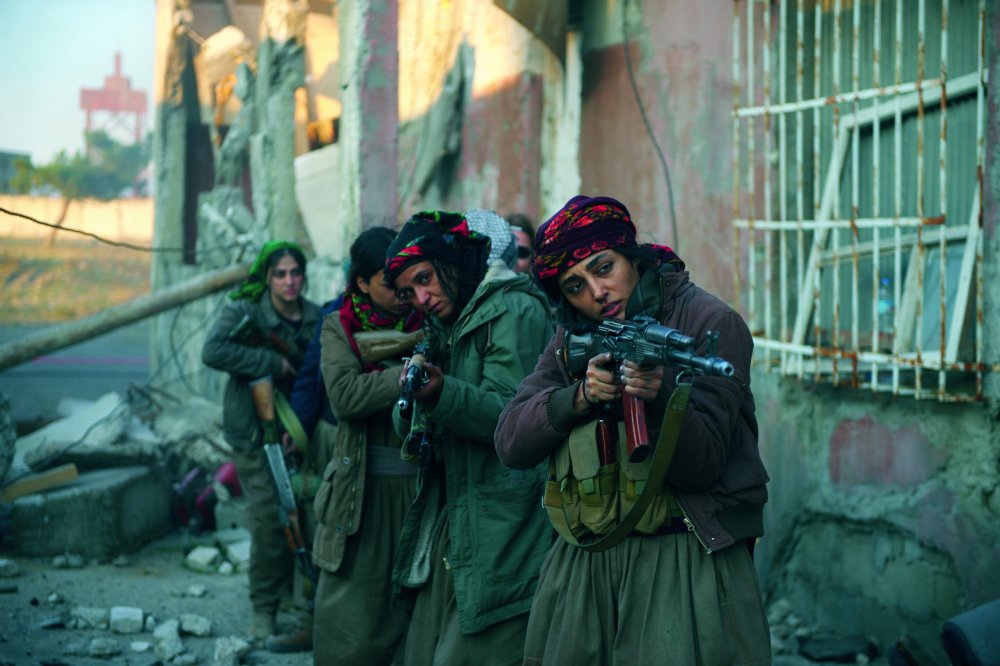 Girls of the Sun is the sort of film that raises a number of questions both about the nature of feminist cinema and our expectations of it. Eva Husson’s sophomore film focuses on a military unit of battle-hardened Kurdish women who seek retribution and freedom for Kurdistan against Islamic extremists. The women are ex-captives and mostly former sex slaves trafficked by the Islamic State and bought back by the Kurdish government, so their reasons for fighting are both personal and ideological. The leader of this band of united women is Bahar (Golshifteh Farahani), who has faced enough trauma and tragedy to destroy most people.

Bahar’s life as a lawyer is ruptured when her village is raided and massacred, leaving most of her family dead or captured. Sexual violence becomes a fact of her life as she’s sold and passed between men, and Husson reveals increasingly horrific events in regular flashbacks. The film continues in parallel with this backstory and an ongoing attempt by the women to reclaim the invaded city, where a school has been requisitioned to train a new generation of young boys to support the Islamic State.

While the violence in the film is not explicit, it is highlighted at every opportunity. It is a litany of grief and degradation. Husson never misses a chance to revel in female suffering, from a long shot of Bahar limping heavily down a corridor after a violent rape, to blood-soaked, blank-eyed dead children strewn on the floor. Some may say it’s a subject that bears repeating, but it reveals a deeply patronising attitude toward the audience. This is a film which underestimates a viewer’s ability to empathise unless under the most extreme of circumstances.

If Farahani is at least believable in the role, the characterisation of Mathilde (Emmanuelle Bercot), the tough French reporter embedded with the unit, is almost laughable. Underwritten and completely unconvincing as an experienced war correspondent, she has a dead husband and an eyepatch in lieu of a personality.

All this horrific subject matter clearly signals the film’s good intentions in drawing our attentions to these terrible events. Yet Girls of the Sun, for all its hopeful adversity and well-styled action sequences, is frustrating most of all because it relies on emotional manipulation. Husson’s heavy-handed storytelling suggests that women must be suffering and debased on screen in order to provoke emotion, and remarkably heroic in order to fashion a hopeful narrative.

In her attempts to underline female solidarity in the face of unfathomable cruelty and misogyny, Husson does offer some poignant moments. But the film mostly operates in the mode of clunky miserabilism, with an awareness that it may be impervious to fault-finding. We must ask ourselves if didacticism is the best we can ask for from our female-led war films, and certainly from our feminist cinema. Hearing female voices and telling stories as remarkable as that of these courageous Kurdish women is more important than ever. That’s why the films that lift those voices should be held to high standards, ones of subtlety and quality that Girls of the Sun clearly cannot meet.