Film of the week: The Tale of the Princess Kaguya

Anime veteran and Studio Ghibli co-founder Takahata Isao emerges with a delicate post-pastoral fairytale epic, a millennium in the making.

Now 79 years old, Takahata Isao has been an animation director (though never an animator) for half a century. He was the co-founder of Studio Ghibli (which made The Tale of the Princess Kaguya) and a colleague and mentor of Miyazaki Hayao. Takahata’s landmark works include his first feature, The Little Norse Prince, made long before Ghibli in 1968; a television version of Heidi (1974), still beloved in Japan; and the wartime tragedy Grave of the Fireflies (1988).

In Colour
[1.85:1]
Released in UK in both Japanese-language version with English subtitles, and in English-dubbed version
Japanese theatrical title Kaguya-hime no Monogatari

His new feature, his first for 15 years, is based on a Japanese folktale, The Tale of the Bamboo Cutter, which dates from the tenth century and is widely known in Japan. In that respect, Kaguya is comparable to a Disney fairytale; the title character – a free-spirited girl who rebels against parental and social constraints – will be familiar to anyone who’s seen Disney’s The Little Mermaid (1989) or Mulan (1998). Kaguya also recalls Takahata’s Heidi and his later TV serial Anne of Green Gables (1979), which had similar themes. Anne’s character especially is echoed in the scenes of Kaguya’s mischievous adolescence.

Kaguya is magical but in a very matter-of-fact way. At the film’s start she emerges from a bamboo stalk like Thumbelina, a tiny princess found by an amazed peasant couple. She then transforms into a more human baby, growing rapidly, sometimes in the space of a scene. Her adoptive parents – who are central to the film, in contrast to the Disney tradition – find money sent from heaven, and lift themselves and Kaguya up to the Japanese aristocracy.

This is the Heian era, as described in the 11th-century novel The Tale of Genji, when fine ladies had their eyebrows plucked and their teeth blackened. Both these prospects appal Kaguya, who yearns for her simple country life and peasant playmates, for the birds, fruits and insects. She longs to be an ordinary girl, even as the adults insist that she’s a princess from heaven whose rightful place is in a mansion. In two different sequences, she escapes to her country home, only for these scenes to magically ‘unhappen’, dissolving into dreams. 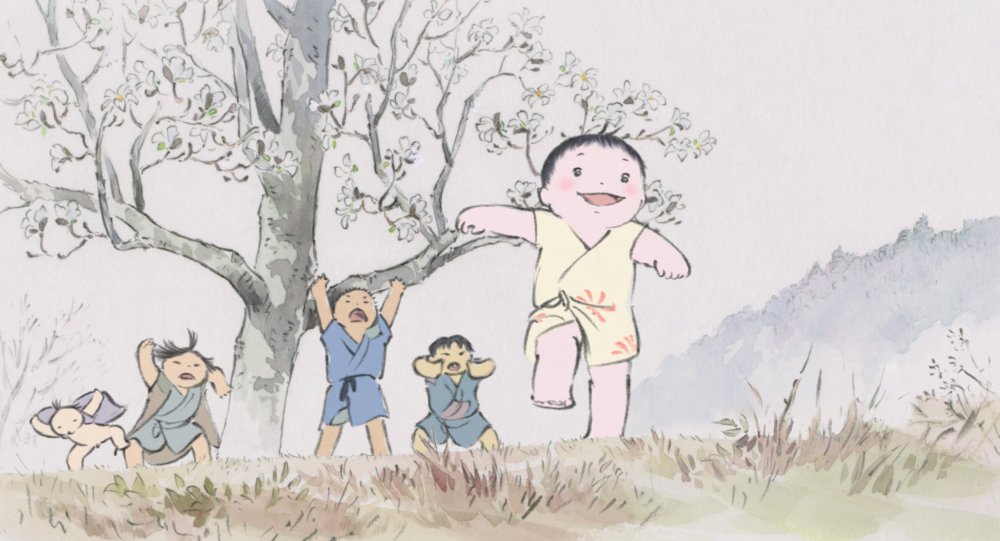 The film is most obviously separated from other cartoon features by its gorgeously handmade appearance. It uses deliberately incomplete watercolours, complemented by white space. The look is less sketchy than Takahata’s 1999 film My Neighbours the Yamadas but more stylised than the childhood scenes in his Only Yesterday (1991). The palpably drawn quality of Kaguya, if not its art style, may remind British viewers of The Snowman (1982). In one of the most impressionistic scenes, Kaguya flees into the wilderness, landscape and girl half-dissolving into angry dashing scribbles of movement.

But while the characters feel very simplified at times, there are scenes that put great weight on performance and subtle expressions, in a way that’s nearer to the classical Disney tradition than most Japanese animation. It’s evident with the teenage Kaguya, merry and anguished by turns, but also in the pomposity of her father and suitors. Kaguya’s character animation was led by Tanabe Osamu, and the background art was directed by Oga Kazuo, celebrated for his depiction of nature in Ghibli’s My Neighbour Totoro (1988). 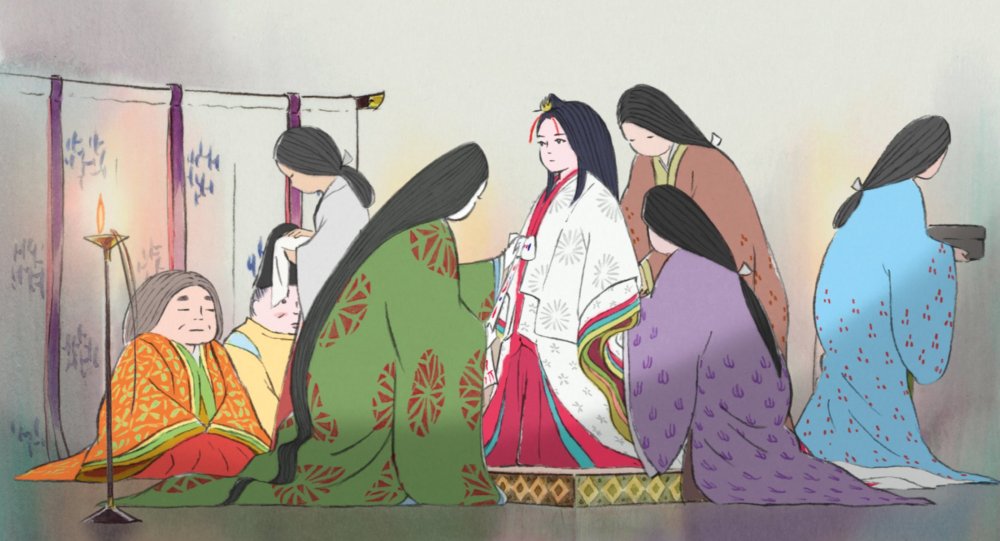 Unlike some of Takahata’s films, Kaguya is very accessible to Western viewers, including children. Kaguya’s joy in nature is captivatingly drawn, whether she’s chasing a frog or playing with a kitten. In one scene, her father and a gang of peasant kids have a silly shouting contest to get the infant to answer to a name, with the kids dubbing her “Li’l Bamboo” and the foolish father bellowing “Princess”; it’s hilarious in any country. A gentle voiceover helps to convey Kaguya to children, though the death of a minor character is a shock – he has what seems like a comical fall, which turns out to be fatal; there’s also a brief but ugly scene in which a boy is beaten.

The main issue with Kaguya is its length. At 137 minutes, it is longer than Miyazaki’s The Wind Rises (2013), which had an obviously epic subject. While the film is charming from its opening moments, it’s a marathon of leisurely telling, especially in its mid-section, where Kaguya deals with five suitors. In Japan, some animated works are serialised in cinemas in episodes of 50 or 60 minutes. Kaguya might have been better suited to that format, though such a release would probably have been too small to justify the film’s high budget. As it was, Kaguya fared modestly in Japanese cinemas, despite glowing international reviews and its Oscar nomination. 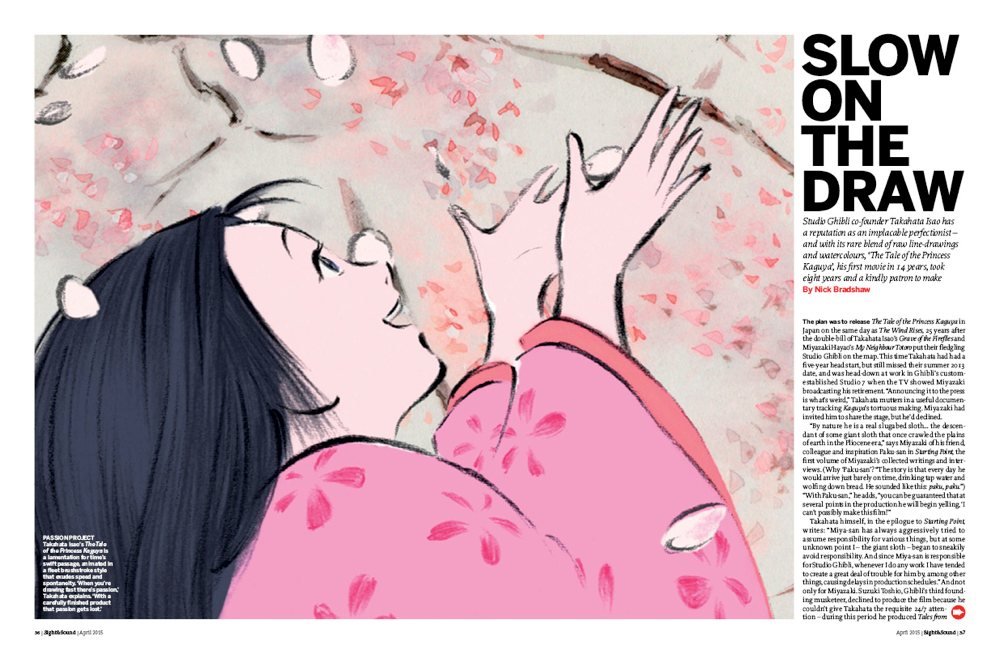 Slow on the draw

Studio Ghibli co-founder Takahata Isao has a reputation as an implacable perfectionist – and with its rare blend of raw line-drawings and watercolours, The Tale of the Princess Kaguya, his first movie in 14 years, took eight years and a kindly patron to make. By Nick Bradshaw.

Related to Film of the week: The Tale of the Princess Kaguya