Film of the week: Redoubtable falls out of love with Jean-Luc Godard

Michel Hazanavicius recounts the breakup of the New Wave icon and his muse Anne Wiazemsky in this playful, irreverent and occasionally scathing movie. 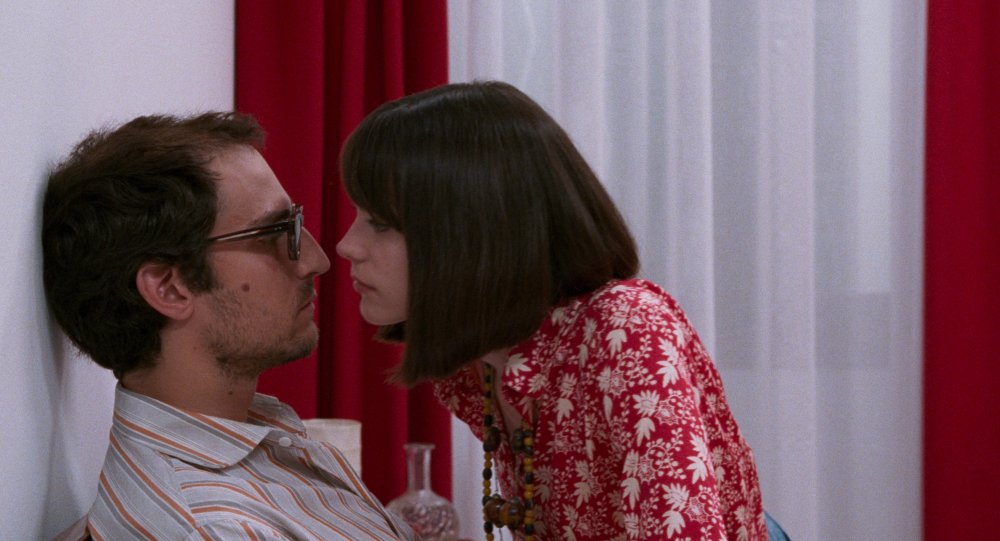 The actor Anne Wiazemsky, who made her debut in Robert Bresson’s Au hasard Balthazar (1966) and the following year starred in Jean-Luc Godard’s La Chinoise, died last October at the age of 70. Redoubtable, adapted from her 2015 memoir Un an après, could perhaps be regarded as a posthumous revenge on the man who became her second director and, not long afterwards, her husband. The portrait of Godard that emerges in Michel Hazanavicius’s film, though, is rather more scathing, and even more irreverent, than that painted by his ex-wife. (The couple split up in 1970; divorce didn’t follow until nine years later.)

The film takes its title from a radio news item that we see the pair listening to early on in the action. Dealing with the launch of a new French navy submarine, the announcer explains that “life is tough aboard Le Redoutable”. The line is reprised several times, as Anne’s life with her redoubtable mate becomes increasingly insupportable.

Following the unlooked-for success of his multi-Oscar-winning silent-movie spoof The Artist (2011) and the flop of his all-too-serious The Search (2014), set in 1999 Chechnya, Hazanavicius has evidently decided that comedy is his thing – and for all that it deals with the painful emotional erosion of a relationship which culminates in a suicide attempt, Redoubtable is largely played for laughs. Louis Garrel’s Godard is often reduced to a slapstick figure, repeatedly falling over and smashing his glasses, without which he’s almost blind, and at various times humiliated by the youngsters whose cause he tries to support during the uprisings of May ’68. (“Grow some balls, Jean-Luc!” yells a student, when Godard misjudges the mood of a tempestuous gathering at the Sorbonne.) But he himself can dish out the humiliation when he gets the chance, mercilessly berating a young film student who has dared to express admiration for his work, and patronisingly lecturing Anne (Stacy Martin, appealingly fresh-faced and increasingly disillusioned) in what she describes in her memoir as his “schoolmasterly tone”.

Perversely, it seems that Godard – at least as he is depicted here – will defer almost cringingly to anyone who criticises him (especially if they’re younger than him) and treat with contempt those who praise him. At times he seems motivated to lash out by what Wiazemsky vividly termed “this terrible spitefulness squatting inside him”, as when he denounces Bernardo Bertolucci to his face as making “cinéma de merde”. To be fair, he also dismisses his own films in the same scatological terms, and much of his anger seems to stem from self-hatred. “All artists should die at 35,” he announces (being 37 at the time), and writes off the whole of cinema – including that of such former idols as Renoir and Lang – as worthless. Sole exceptions, he asserts, are the Marx Brothers and Jerry Lewis.

One of Redoubtable’s funniest and most technically virtuoso scenes is set in a car carrying Godard and Anne, their friends Michèle (Hazanavicius’s partner and regular star Bérénice Bejo) and Jean-Pierre Bamberger (Micha Lescot), filmmaker Michel Cournot (Grégory Gadebois) and their driver Emile (Marc Fraize) back to Paris from the Cannes Film Festival, which Godard and his friends have succeeded in shutting down on revolutionary grounds – thus robbing Cournot’s picture Les Gauloises bleues of its premiere. With public transport shut down by the strike and petrol near unobtainable, for Emile to have procured car and fuel as a favour to Michèle and Jean-Pierre is quite an achievement. Nonetheless, Godard, far from expressing gratitude, manages to alienate all his fellow travellers with his curmudgeonly behaviour. The scene is shot in a long sustained take framing all six actors, a tour de force of malicious humour.

This nightmare journey doesn’t derive from Un an après, where the trip is mentioned but little of what might have happened on it; and Hazanavicius tosses in a good many gags of his own, as when Godard tries to disguise his fingerprints with glue and then finds that everything sticks to his fingers, or when he and Anne wander around their bedroom stark naked talking disparagingly of filmmakers who seem obsessed with undressing their actors. He can’t resist slipping in a Woody Allen gag, either, with a fan asking JLG, “When are you going to make funny films again?” Some opportunities from Wiazemsky’s book are missed; the acrimonious confrontation in London between Godard and John Lennon would have been well worth watching.

At the start of the film, we hear Anne’s star-struck voice describing her lover, director and mentor: “He was respected by the whole world, unanimously regarded as the most gifted of his generation. The nouvelle vague – that was him, Jean-Luc Godard. His very name embodied a certain concept of cinema. The future belonged to him. And I loved him.”

The disillusion that sets in during the course of the film can be seen not only as hers, but as that of Godard’s early admirers, for it covers the period when, largely under the influence of theorist Jean-Pierre Gorin, he went from making (as has often been remarked) films that everyone wanted to watch to films that no one wanted to watch. The point is underlined by sly visual nods to several of those early ‘funny’ films – Vivre sa vie (1962), Le Mépris (1963), Une femme mariée (1964), Pierrot le fou (1966), Weekend (1967) and the like – along with pastiche stylistic ‘Godardisms’: chapters, quotations, intertitles (“Pierrot le mépris” reads one) and jump cuts. Faced with poor reviews and falling box-office sales, Godard, as one might expect, blames the customer. “If the audience no longer likes my films,” he states defiantly, “it’s because there is something wrong with them.” ‘Them’, of course, being the audience, not the films. 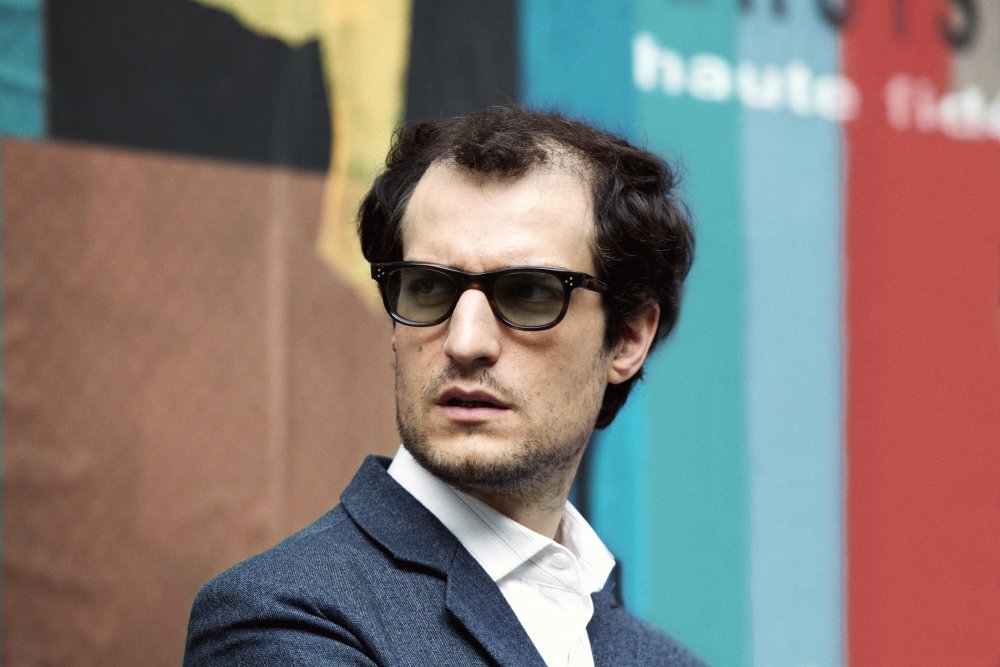 Redoubtable, predictably enough, has stirred up a good deal of indignation among dedicated Godardians, being denounced in various quarters as “crude”, “pointless”, “fawning”, “lazy” and “what happens when the mediocre envy the truly great”. Godard himself has dismissed the film as “a stupid, stupid idea” – a verdict that the distributors, opportunistically impudent, have plastered all over the release posters. Hazanavicius, while acknowledging that “to me, [Godard is] one of the five to eight directors who changed the history of cinema”, adds that “some people probably think me telling Godard’s story is blasphemy… But he’s not my hero or my god. Godard is like the leader of a sect and I’m an agnostic.”

Hazanavicius has also claimed (not entirely convincingly, perhaps) to have “made Redoubtable in a spirit of admiration and respect for Godard and his work, at the same time as aiming to make a film that was entertaining and appealing to a wider audience”. Entertaining it certainly is; there’s a playful irreverence about the narrative treatment that keeps it watchable, and Garrel, often seen as a narcissistic actor, paradoxically gives perhaps his most likeable performance yet as a largely dislikeable character. Altogether the film treads a knife-edge, maintaining an effectively teasing balance between satire and homage, and depicting, in Hazanavicius’s words, “a man’s profoundly sincere… quest for political and artistic truth, combined with a sort of masochistic and self-destructive pathology”.

Further muddying the waters, Hazanavicius has stated that the real topic of his film is radicalism. An arguable claim; but the central section of Redoubtable does succeed in capturing, more vividly than any other film of recent years, the excitement, exhilaration and delusive hopes of the évé̌nements of May ’68.

Related to Film of the week: Redoubtable falls out of love with Jean-Luc Godard