Film of the week: Norte, the End of History

Filipino arthouse hero Lav Diaz shoots for Balzacian social breadth and Dostoevskyian moral depth with this sprawling crime-and-punishment fable, his first to gain UK release. If only he would stretch himself…

Lav Diaz is a polarising figure in the landscape of contemporary world cinema. The veritable ‘elder’ (now 55) of an experimental movement in Filipino cinema that includes Khavn De La Cruz, Sherad Anthony Sanchez and Raya Martin (all of whom refer back admiringly to the pioneering work of Lino Brocka), Diaz is for many a beacon of the ‘slow cinema’ trend that also includes Lisandro Alonso, Béla Tarr and Albert Serra. Working with extended running times (Melancholia from 2008 clocked in at an epic eight hours) and long takes, often static and in wide shot, Diaz tends to adopt the form of the social panorama or the family chronicle – a more homely, everyday version of the ‘network narratives’ favoured by mainstream cinema in recent years.

Yet Diaz’s vision is harder and bleaker than anything in the network plots of Paul Thomas Anderson or Alejandro González Iñárritu. Often using non-professional actors in a blend of half-scripted, half-improvised situations, Diaz draws a painstaking diagram of the social factors that shape the lives of the people he evokes and observes: class, money, religion, law, education.

These external, determining factors often give Diaz’s films a grim, relentless air of pessimism and inevitability – everybody seems to be trudging toward their particular corner of hell. But, as in any panorama with Balzacian ambitions, there are also unpredictable, personal factors that can complicate and even reverse the general slide toward doom: random, spontaneous acts of desire or violence, key moments of reflection or compassion.

Norte fits this template. The character of Fabian is a portrait of the rebel (and would-be artist) as futile philosopher or downright hypocrite, spouting fancy rhetoric (the film’s opening line: “This is the end of politics”) while remaining alienated from anything resembling practical activism. Like in a Leonard Cohen song, Fabian and his friends endlessly, nostalgically evoke the ‘old revolutions’ – which are of dubious relevance to their contemporary situation.

Yet Fabian commits himself to a single, impulsive act of anarchistic murder, in sympathy with the oppressed Eliza. Like a tormented hero from the novels of Dostoevsky (whom Diaz greatly admires, and has often referenced), or from a film by Bresson, Fabian’s life is sent into a tailspin by this one action. He thrusts money at Eliza in the street or behind her vegetable stall; and he makes moves to ease or reverse the plight of her husband Joaquin, who is jailed for Fabian’s crimes – but he never goes so far as to confess or give himself up. Instead (and this is a typical trajectory in Diaz’s cinema), Fabian prefers to dissolve into anonymity, to become a ‘nowhere man’, last glimpsed in a distant shot, cruising on the water.

Joaquin’s years in jail represent the other, contrary side of the ‘Russian literature’ coin – precisely the side that Bresson, for all the religiosity that some viewers project onto him, pointedly elided in a film such as L’Argent (1983). Joaquin becomes a kind of saint, quietly refusing to perpetuate the cycle of abuse and exploitation around him. He is the mythic figure of the sacrificial scapegoat – for Fabian and for his fellow prisoners – who suffers for the sins of others; in turn, some of these others (such as the sadistic Wakwak) come to their senses and break down in tears, seeking forgiveness and redemption. In a striking, Apichatpong Weerasethakul-like moment near the film’s conclusion, Fabian is even shown in a dream-vision of angelic levitation.

But it would be wrong to impute a strictly religious viewpoint to Diaz; Norte’s very title alludes to those church cults, rife in the Philippines, that preach the coming end of the world (just as Fabian preaches a more secular ‘end of history’), amounting to just another desperate dream of escape from pressing, real-world problems. Diaz is a humanist with a lucid, materialist view of how his society works – and it is this friction between humanist hope and materialist pessimism that drives and structures his work.

It must be said that Diaz’s dramatic imagination serves his female characters far less well than the troubled or abused males with whom (in one aspect or another) he clearly identifies. Eliza, in her daily struggle for economic survival, is given little to do other than walk around looking sad for long stretches of screen time.

The exception is one unforgettable scene, the best and most intense in the entire film, when it seems for a moment that Eliza is, in utter despair, about to kill her kids – a gesture signalled merely, in a long shot, by her stepping behind them atop a cliff, and then returning to her initial spot. This is a rare instance of ‘electricity’ in Diaz’s cinema, when his way of showing an event fuses perfectly with the dramatic content and his intent as a cruel moralist of our time.

Alas, this cannot be said of much else in Norte. Diaz is championed – sometimes excessively, without discrimination between his major and minor works or assessment of his strengths and weaknesses – by many critics who carry the torch for challenging, progressive cinema.

Norte marks an intriguing plateau, and perhaps a turning point, in his career. After 12 years of relatively prolific, independent, low-budget production, it was the first Diaz film to be programmed at Cannes, in 2013. As a film in colour (as distinct from his frequent use of black and white), and with a restrained (for him) running time of four hours, it was even greeted by some acolytes as a sell-out to commercial (or at least wider) accessibility.

Such hardcore fans need not be too worried; Diaz is hardly set to challenge the fame of Spielberg, or even Haneke. In fact, while Norte does loosen up Diaz’s style in a number of ways – consistent (if not conventionally dramatic) use of slow, gliding camera movements; almost surreal deployment of aerial landscape footage marking different stages of the narrative – it also conforms to his standard method.

This method approaches a ‘degree zero’ of artlessness: conversations in long shot go around and around, scenes drain away, performances are hit-or-miss, the atmospheric sound is thin and unexpressive (Diaz abhors soundtrack music) and many situations (such as characters sitting in cafes or ambling down roads) are repeated over and over without significant variation or development. Diaz fashions a panoramic vision of multiple, interconnected lives, but his ability to signal the passing of time lacks both traditional narrative craft and a more daring, rigorous way with ellipses, in the manner of Maurice Pialat or Pedro Costa.

In some of Diaz’s earlier films (such as Evolution of a Filipino Family, 2004), this very Warholian air of emptiness and artlessness seemed to justify itself well enough: the space between the daily reality that he was staging and the means he was using to record it appeared so thin as to be almost non-existent. There was a certain thrill to this – the kind that persuades you to endure eight-hour screenings, in search of a new kind of filmic epiphany. But as the years pass and the Diaz ‘formula’ hardens, it becomes more difficult to excuse the lack of inventiveness and craft in his work in the name of some spurious ‘neo-neorealism’. Diaz’s most vocal fans do him no favours in this regard: he might become a better, more self-critical director if people stopped reassuring him that every new film he makes is a deathless masterpiece. 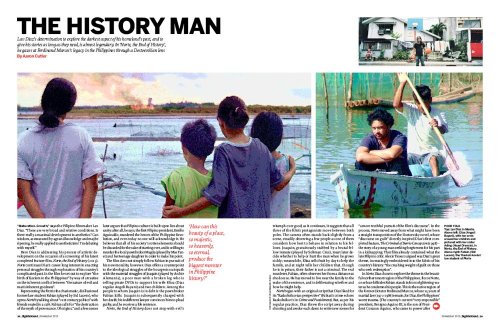 Lav Diaz’s determination to explore the darkest aspect of his homeland’s past, and to give his stories as long as they need, is almost legendary. In Norte, the End of History, he gazes at Ferdinand Marcos’s legacy in the Philippines through a Dostoevskian lens. By Aaron Cutler.

Related to Film of the week: Norte, the End of History