Film of the week: Jauja 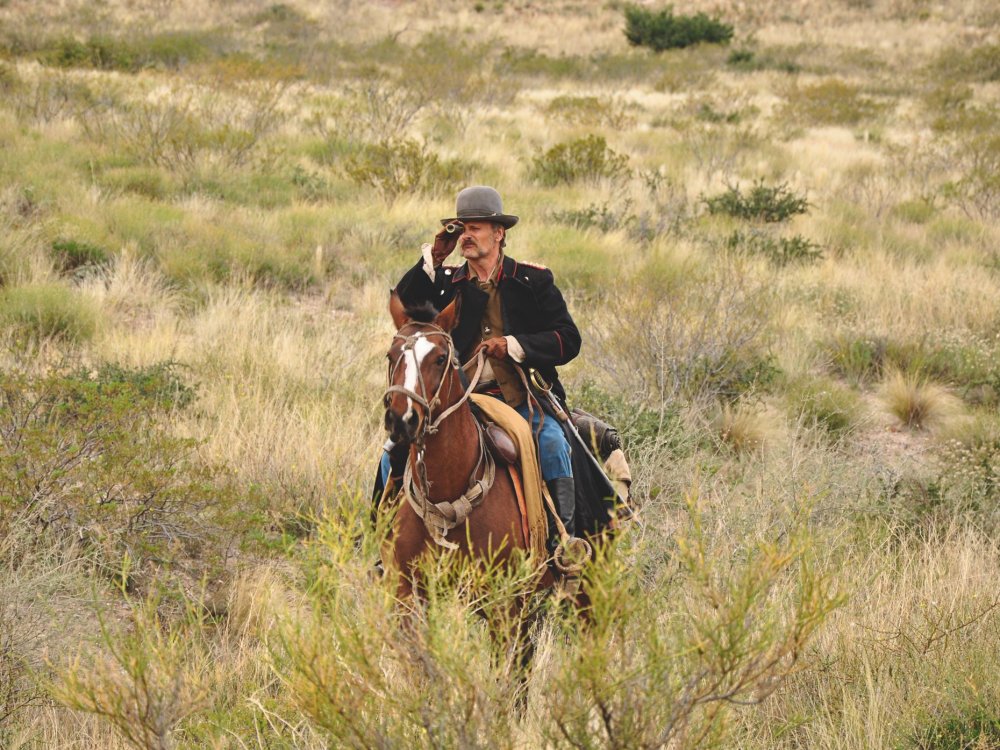 Although at first glance Jauja seem largely plotless, with only a few major narrative moves, this impression is deceptive. In the film’s striking opening tableau, every detail, however casual, will play a crucial role in what is to follow.

In 19th-century Patagonia, Captain Dinesen is a Danish engineer on a quest to find Jauja, a mythical land of happiness and plenty; he sits in a stiff suit, facing away from us and leaning close to his daughter Ingeborg, who is turned towards the camera. Ingeborg speaks of her desire to own a dog – one that will follow her everywhere, that will live only for her. And what does Dinesen become, 30 minutes into the film, but precisely that, abandoning his mission in a heartbeat and blindly following her every trace.

This isn’t simply a matter of director Lisandro Alonso using, across several moments of his film, a pointed dramatic metaphor, or flagging up an ironic analogy. For there will be other, real dogs glimpsed on screen – one of which leads Dinesen to a cave where (in a beguiling rhyme with Christopher Nolan’s blockbuster Interstellar) lives a woman who might well be the elderly incarnation of his daughter – and there is even another Ingeborg, now rechristened Viilbjørk (also the first name of the actress playing her), shown as a character in contemporary times. One of Viilbjørk’s dogs, it transpires, has a nasty ‘nervous ailment’ – brought on by the fact that its young mistress disappears for long stretches of time.

The film takes shape within the poetic flux of these strange, inscrutable shifts and metamorphoses. In what is a bold step in his career, Alonso (La libertad, Liverpool) reaches well beyond the neo-neorealism often associated with the Slow Cinema movement, to shape (with co-writer Fabian Casas, a poet and novelist) an elusive, dreamlike amalgam of diverse times, levels and encounters. While still employing the steady, dispassionate, contemplative camera-eye (and microphone-ear) of his earlier work, Alonso takes Jauja more in the direction of Apichatpong Weerasethakul’s films, or Miguel Gomes’s celebrated Tabu (2012) – a type of cinema in which the materiality of landscapes and political histories is melded with the magical, transformative elements of fairytale and myth. 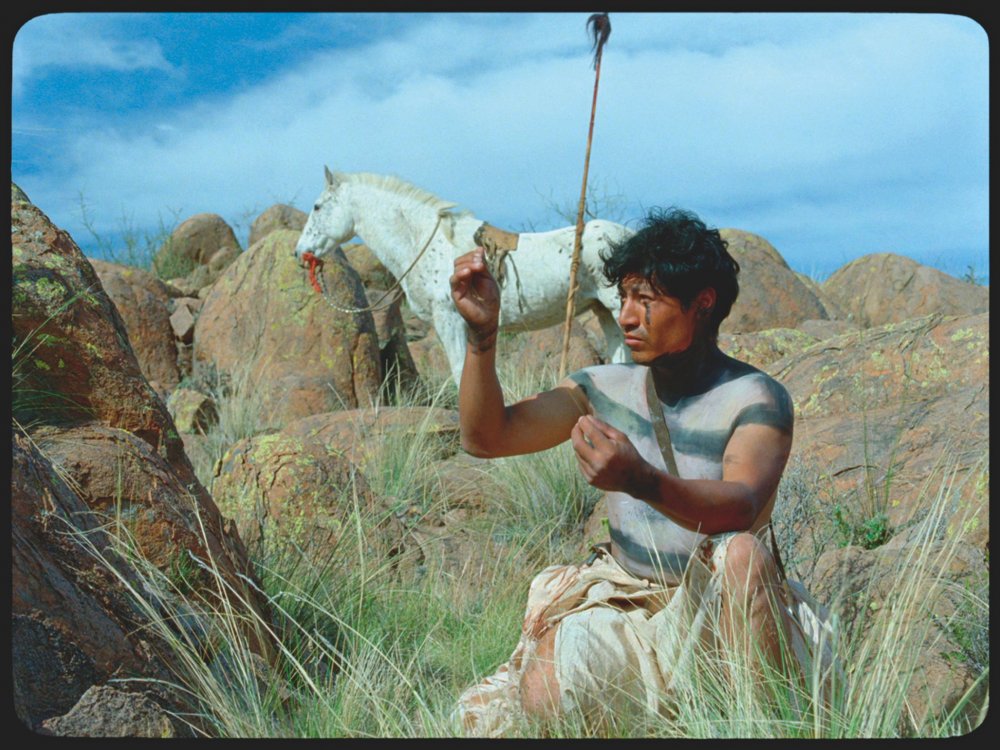 Alonso has developed his art and craft where certain of his contemporaries, such as Lav Diaz, have not. Jauja is a film that (in David Lynch’s useful expression) really ‘works the frame’ – and what a captivatingly rare 1.33:1 ratio that frame is, with its rounded, unmatted corners. Departing far from naturalism, Alonso’s mise en scène systematically deploys large intervals of distance between his ‘figures in the landscape’ or, inversely, comically jams them all together in the one static set-up; with Aki Kaurismäki’s cinematographer Timo Salminen, he explores a rich, intoxicating colour palette; and even the conventional ‘match cut on action’ becomes – in the extreme way it is arranged here – like a rude bump from one world into another.

It is easy to be misled by Jauja’s opening intertitle text, which suggests a robust, epic tale of male adventurers searching for a New World – and losing their way, as all explorers of an impossible utopia tend to do. But this is no return to Aguirre, Wrath of God (1972) territory. Alonso ruthlessly – and often humorously – minimises the traditional panoply of explorer tales: there are no perilous sea voyages, no treks up steep mountains, and hardly a single discernible scrape with the indigenous people of the region – those “coconut heads” who Dinesen’s colleague Pittaluga advises must be entirely exterminated.

Indeed, Alonso’s staging of specific, sparse, incongruous configurations of nature and technological culture – such as the sight of a man in a vast field clumsily wielding a surveying instrument – recalls moments in Terrence Malick’s Days of Heaven (1978), where colourful details of ‘period costume’ and historical props played a similarly excessive, sticking-out-like-a-sore-thumb role. The Argentinian critic Quintín has, in this light, pointed to the large, complex “offscreen space” of Jauja: a conflicted sense of national identity torn between romantic, nostalgic longing for the figure of the gaucho and a no less intense cultivation of European culture and manners (a tension we amply see, for example, in Jorge Luis Borges’s writings). 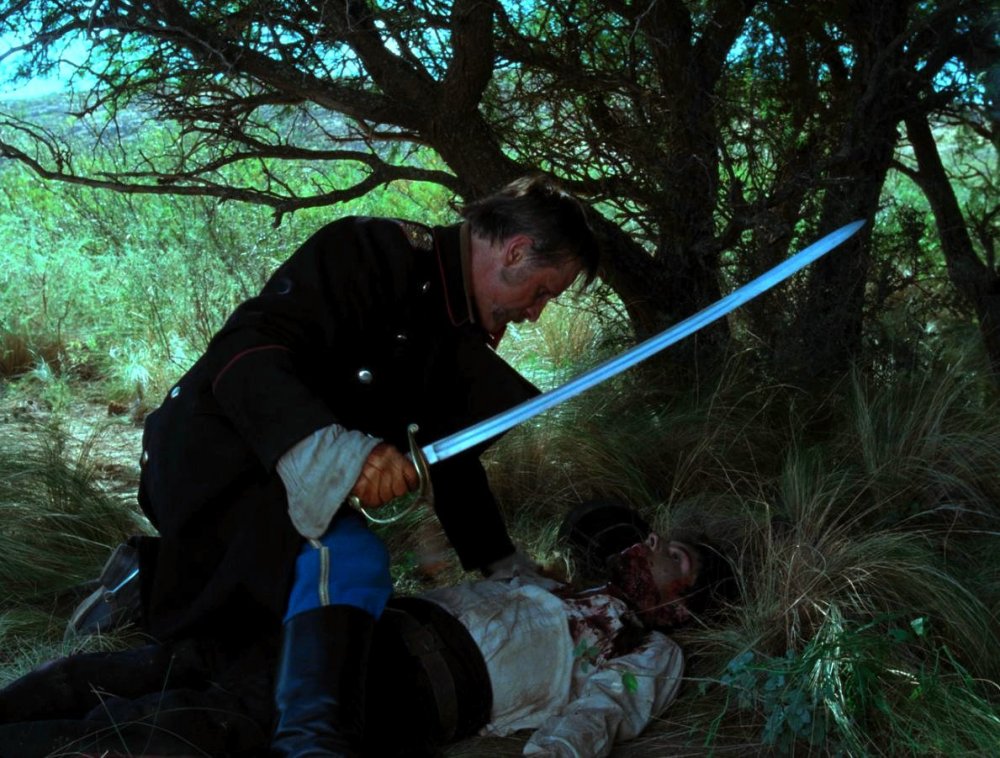 Fourteen years ago, at the moment of his debut feature, Alonso was the furthest thing imaginable from a ‘cinephile filmmaker’ like Gomes or Léos Carax – I vividly remember his anger at critics who endlessly compared his style with that of Chantal Akerman, whose films, at that time, he had not even seen, let alone chosen to emulate. Although he has doubtless imbibed his fair share of international film culture in the period since, Alonso remains a director not given to the postmodern, ‘mannerist’ affection for specific filmic quotations or pastiches. Notwithstanding this fact, Jauja enters into an extremely rich, flowing, unforced dialogue with certain key forms and traditions in cinema history.

For example, there is the western genre – especially in its best-known, American variety. Dinesen’s obsessive hunt for his daughter cannot help but recall the quest of Ethan Edwards (John Wayne) to find young Debbie (Natalie Wood) in John Ford’s The Searchers (1956). Many critics have compared Alonso’s picturing of the Patagonian landscape to Ford’s images of Monument Valley and the like.

But, beyond surface plot and setting, Alonso here takes us to the core of the western (and, indeed, of The Searchers), no matter where it plays or how it is recreated: Jauja explores the thin veneer of a civilisation yet to be solidified, a civilisation that is little more than the ambiguous flux of animal and human, tame and savage, the desired and the repressed. Hence the hint of incestuous feeling between father and daughter (incest was already a topic hovering over Liverpool) – a feeling imperfectly ‘contained’ by morality or law, and hence feeding (or ‘devouring’, to use a recurrent word here) all reality with its force of fantasy. For all its evocation of the ‘classical’ western, Jauja also, at moments, conjures a chilled-out Alejandro Jodorowsky – less obviously surrealistic but no less provocative in its core propositions. 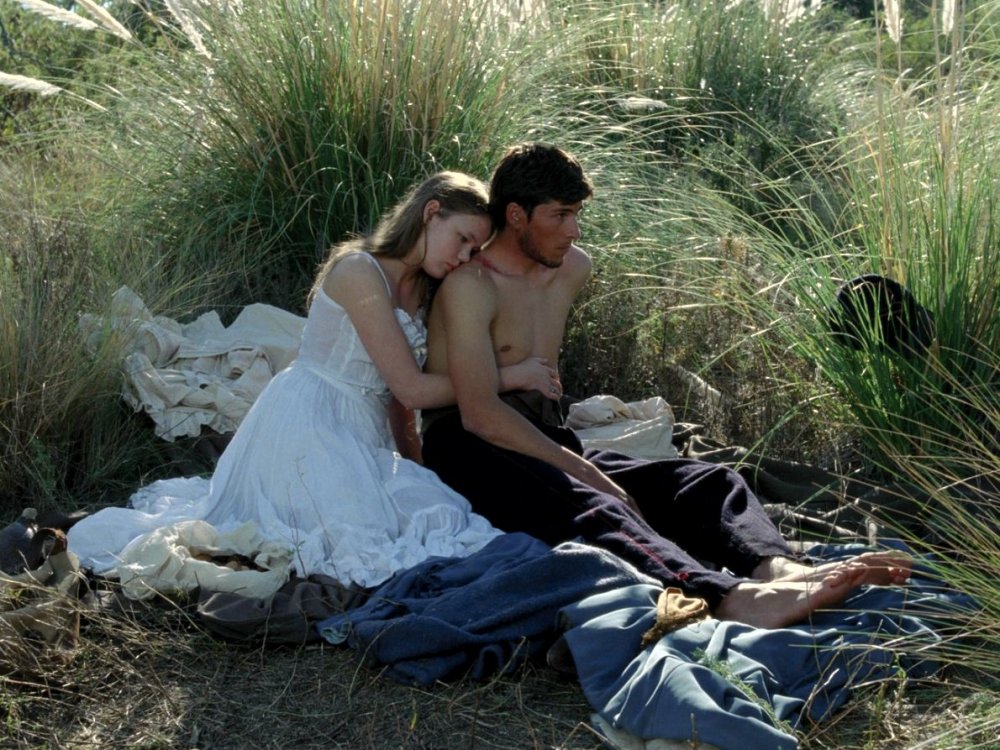 The casting of Viggo Mortensen is especially apt on this level. Apart from the subtle skill he brings to the project – setting his character apart from the rest through a small-scale set of nervy, histrionic tics and glances – he also embodies, in cinematic memory, a fascinating series of western or quasi-western hero/antihero figures from films such as the underrated Hidalgo (2004) and Ed Harris’s Appaloosa (2008) through to his richly ambiguous role in Cronenberg’s A History of Violence (2005), another film that echoes, in key details, The Searchers.

What is most remarkable in Jauja, however, is the way it engineers a slow swerve away from an initially – even oppressively – male genre-cluster (adventure plus western) to become wholly, finally, the vivid phantasm of a young girl (and hence something akin to surreal, Buñuelian melodrama, like Valeria Sarmiento’s Our Marriage, 1984). In the ultimate shift from past to present and from dream to reality, Alonso is not presenting us with a narrative puzzle to be clarified, solved and thus swiftly exhausted by its viewers. Although comparisons as diverse as De Palma’s Femme Fatale (2002), Lynch’s Inland Empire (2006) and Teresa Villaverde’s Transe (2006) will spring to a cinephilic mind, Jauja is closer to the militantly unsolvable riddle of Pasolini’s Oedipus Rex (1967) – another film about a precarious civilisation with a dark, ever-living undertow of barbaric myth. When Alonso and Pasolini starkly cut or dissolve between different planes of historical time and society, they are not groping for banal ‘explanations’ of a storytelling mystery; it is their way of excavating, ever deeper, the enigmas of reality. 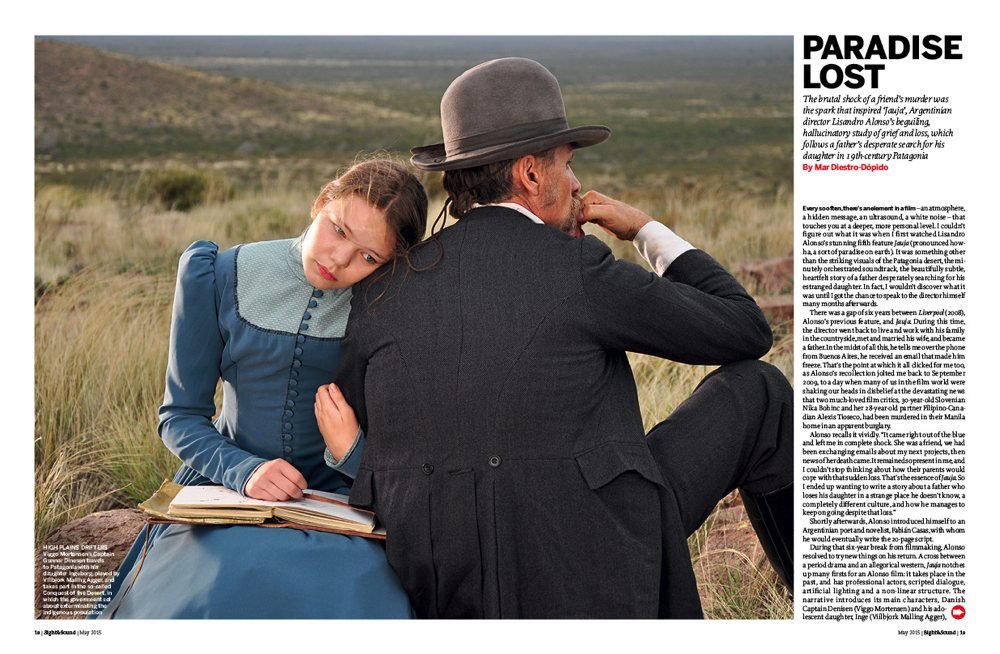 The brutal shock of a friend’s murder was the spark that inspired Jauja, Argentinian director Lisandro Alonso’s beguiling, hallucinatory study of grief and loss, which follows a father’s desperate search for his daughter in 19th-century Patagonia. By Mar Diestro-Dópido.

Jauja star Viggo Mortensen traces the personal history that drew him to Lisandro Alonso’s dreamlike fable and explains why the director is unique among modern filmmakers. By Mar Diestro-Dópido.

Related to Film of the week: Jauja